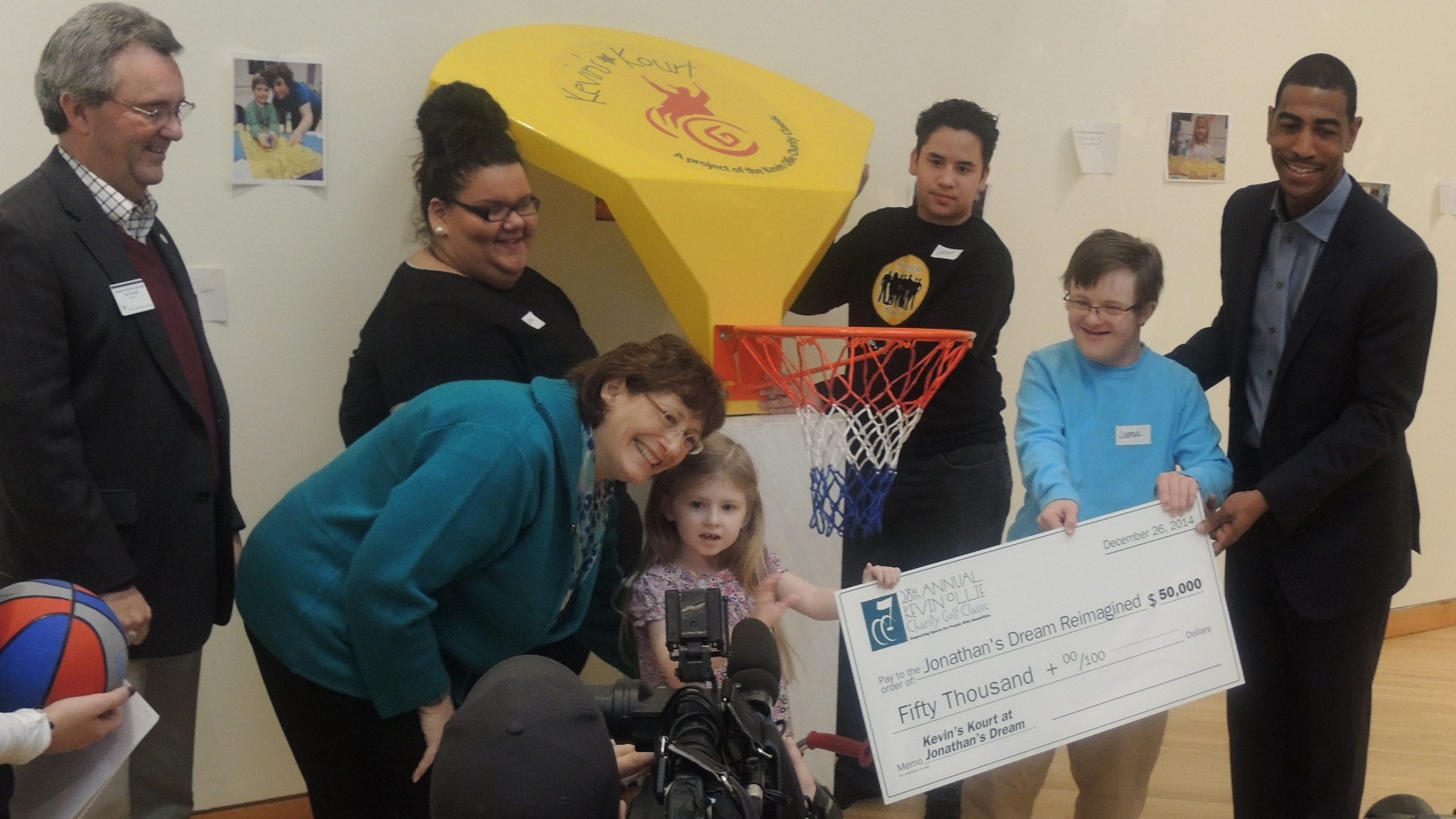 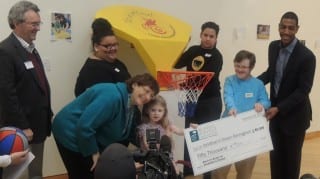 UConn Men’s Basketball Coach Kevin Ollie has been a longtime supporter of athletes with disabilities, and thanks to a major donation to “Jonathan’s Dream Reimagined,” his favorite sport of basketball will be accessible to all on “Kevin’s Kourt” in West Hartford.

Ollie visited West Hartford on Dec. 26 to present a $50,000 check that will be used to build the first “Kevin’s Kourt” at Jonathan’s Dream Reimagined – a playground to keep children of all ages and abilities “active and moving” – that will soon be built at the site of the former Jonathan’s Dream at the Zachs Campus adjacent to the Mandell JCC in West Hartford.

“I’m going to come over here in the summertime, in the springtime and just take a seat on the bench and relax and watch all the kids playing. It’s going to be a wonderful and exciting thing to see this court go up,” Ollie said at the ceremony announcing what he hopes will be the first of many “Kevin’s Kourts” to be built in Connecticut.

Amy Barzach, a West Hartford resident who was inspired to build the original Jonathan’s Dream by her son, Jonathan, who had spinal muscular atrophy, went on to help build accessible “Boundless Playgrounds” in more than 200 other communities. She was on hand Friday to accept Ollie’s donation. 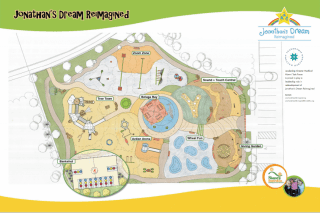 “I so appreciate Kevin Ollie stepping forward and making this significant gift. It’s a great way to end 2014 and position us to have momentum for 2015 to raise the rest of the money,” said Barzach in a telephone interview.

Barzach is part of the “Dream Team” working to build Jonathan’s Dream Reimagined. Barzach said that she is delighted to have Leadership Greater Hartford’s Alumni Task Force taking the lead to develop the new playground. The Dream Team also includes representatives of the Mandell JCC, and Barzach said that she recruited West Hartford resident Ronit Shoham, a volunteer extraordinairre and experienced fundraiser, as coordinator and “voluntary godmother” of Jonathan’s Dream. “I just didn’t feel that I could carry the program a second time,” Barzach said.

Jonathan’s Dream, the original boundless playground which opened in 1996, had served its useful life and was closed and eventually dismantled in 2013 due to safety concerns.

“‘Kevin’s Kourt at Jonathan’s Dream’ will help children and families, of all ages and abilities, discover the freedom of playing together without limitations,” Barzach said at the announcement.

“The Kevin Ollie Charity Golf Classic has been underwriting programs for athletes with disabilities for many years, but he wanted to take the next step and build something,” said Jay Sloves, a member of the committee for Ollie’s golf tournament who was also involved with the original Jonathan’s Dream. He and fellow committee member Rick Bernstein connected Ollie with Barzach to initiate the plan to include Kevin’s Kourt as part of the project.

Just like the original playground, Jonathan’s Dream Reimagined will be “wheelchair accessible and intergenerational,” with activities to foster play and imagination. Since disabilities vary widely, the design, donated by Los Angeles-based non-profit Shane’s Inspiration, will have play activities for children with specific disabilities and ensure that every child will be able to do many things throughout the playground. (Click here for more details.)

“Kevin’s Kourt at Jonathan’s Dream” will be the first inclusive community Bankshot™ court in the state, and will include nine stations. Bankshot has pioneered inclusive basketball play structures based on “total-mix diversity and universal design.” 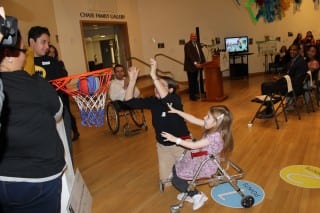 “’Kevin’s Kourt’ allows us to be part of the community and that’s what we want, to contribute beyond ourselves,” said Ollie at the announcement. “That’s what we teach our players, and this is a great kickoff to this event.”

The total cost for Jonathan’s Dream Reimagined is estimated at $950,000, and Barzach said that Ollie’s donation is the largest to date. It will be four to five times the size of a typical playground, so that budget “isn’t as crazy as it sounds,” Barzach said. The original Jonathan’s Dream cost about $500,000 to construct, according to Barzach.

Construction should be able to commence three to six months after all of the funds have been raised. “In a perfect world, that would be fall 2015,” Barzach said. She’s hopeful that it will be no later than 2016.

A sizeable donation was also made by a committee of teens working through Leadership Greater Hartford, and Barzach is hopeful that local teens who grew up enjoying the original Jonathan’s Dream will also help raise some of the funds needed.

Additional donations to Jonathan’s Dream can be made by visiting www.jonathansdreamreimagined.org, or by mail to 335 Bloomfield Avenue, West Hartford, CT 06117, or by contacting Ronit Shoham at 860-558-5313 or emailing her at [email protected].