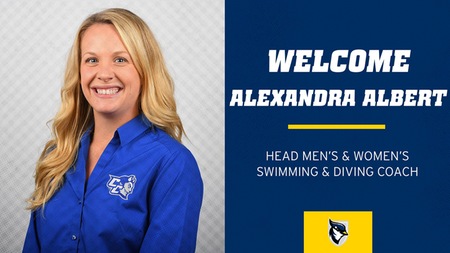 The University of Saint Joseph in West Hartford has named Alexandra Albert, whose experience includes coaching the West Hartford Aquatics Team (WHAT) and at Wampanoag, as head coach of the men’s and women’s program.

Alexandra Albert has been named the next head coach of the University of Saint Joseph (USJ) men’s and women’s swimming and diving programs, it was officially announced by Director of Athletics Amanda Devitt. Albert becomes the fourth women’s head coach and second men’s head coach to lead the Blue Jays in program history and she started on Sept. 6, 2022.

“We are excited to announce the hiring of Alexandra Albert as our next Head Coach,” said Devitt. “During the process, Alex’s enthusiasm and vision for both programs shined through and we know she will be able to carry on the rich tradition of the USJ swimming and diving programs.”

“I’d like to thank Director of Athletics Amanda Devitt, Associate Athletic Director Wole Oke, Assistant Athletic Director Josh Ingham and everyone else on the hiring committee for this amazing opportunity,” stated Albert. “I am so excited to take on the role as Head Swimming and Diving Coach for the Blue Jays. I look forward to working with the student-athletes and helping them reach their full potential in the pool as well as in the classroom and in the community. I also want to thank my husband Dylan, my daughter Freya, my family, former coaches and peers for all of their support throughout my coaching career.”

Albert takes over the reigns of the USJ men’s and women’s swimming and diving programs after most recently spending the previous four seasons as an assistant coach at Division I Central Connecticut State University (CCSU) under head coach Bill Ball. At CCSU, Albert aided in all facets of the program from student-athlete development, recruiting, and operation requirements. She made an immediate impact with the Blue Devils, helping CCSU improve from a fourth-place Northeast Conference (NEC) team finish, to runner-up honors in 2019, 2020, and 2021.

In addition to her role with CCSU, Albert also served as the assistant swim coach for the West Hartford Aquatics Team (WHAT) in West Hartford. There, she readied youth swimmers for competitive meets by developing safe and proper stroke technique. In her role, she also was responsible for creating and implementing training plans, practices, and overseeing swim meets.

Albert also spent time as the head swim coach at Wampanoag Country Club, located in West Hartford. At Wampanoag she was responsible for leading all practices for swimmers aged five through 18. In her role, she supervised a team of assistant coaches and ensured the safety of all practices, and created meet lineups.

Outside of coaching, Albert is a behavior specialist at Webb Elementary School in Wethersfield.

As a student-athlete at CCSU, Albert was a member of the 2008 NEC and Eastern Collegiate Athletic Conference (ECAC) championship team. During that season, she garnered NEC Rookie of the Year accolades.

Originally from Wethersfield, CT., Albert earned her bachelor’s degree in hospitality and tourism from CCSU in 2011.