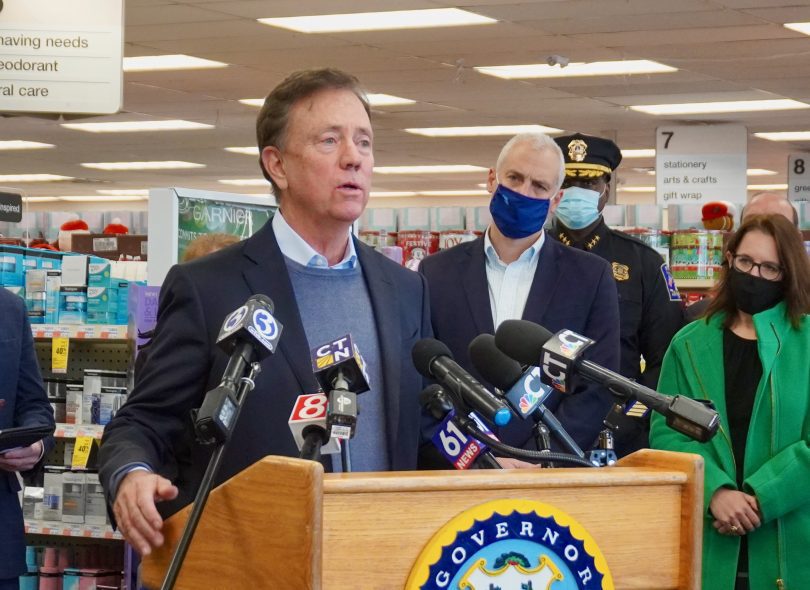 As of Monday, Connecticut residents have the ability to request a “SMART Health Card QR Code,” to verify their COVID vaccination status through the Public Health Department website. Following a Wednesday press conference at a CVS pharmacy in West Hartford, the governor told reporters it was part of a test ahead of an official launch expected next week.

“[W]e’ve been testing this now for a week or so at public health, we’re doing this alongside Delaware and a number of other states,” Lamont said. “When you roll it out, you want to get it right. We’re taking privacy very seriously. That’s part of what this process is about. I think we’ll be ready to go in a week or so but it depends on the final test.”

“[Lamont’s] vaccine passport system could have significant ramifications on residents and their ability to obtain essential goods and services,” Candelora said. “If ever there were a subject that required more discussion and public scrutiny, this is it. Having state government facilitate a program for businesses that would empower them to turn people away, further dividing the unvaccinated from the vaccinated, is a path that requires deliberation.”

Candelora said the governor should participate in a public hearing on the topic “before installing this program.”

Asked about the request for a public hearing, Lamont said he wasn’t opposed. But he also did not intend to delay availability of the QR codes while such a hearing took place.

“Let me talk to Vinny about that,” Lamont said. “We can have hearings in February and do it afterwards but, I want the arms on the ground when we need it, which is right now.”

Asked whether the digital platform would eventually facilitate the enforcement of a vaccine mandate, the governor said it was developed to avoid mandates. He said it was designed to give stores, restaurants, and other businesses the tools to set and enforce their own policies. Lamont stressed that requesting a QR code was voluntary.

Envision Technology Partners, which runs CT Wiz, the state’s immunization reporting website, has updated its existing software to include the QR code, according to Chief Operating Officer Josh Geballe. The QR code is universal so it will be able to be read by software in other states.

Geballe said there are about 14 states that use Envision Technology Partners for their immunization systems and Delaware is one of them.

Currently, there are few businesses in Connecticut that require patrons to be vaccinated. Lamont pointed to the Bushnell Theater in Hartford, which has a vaccine requirement, as well as a Foo Fighters concert back in September in which the venue, Hartford Healthcare Amphitheater in Bridgeport, required concert-goers to be vaccinated.

“I think you’re seeing more and more retail merchants doing this on an informal basis because a lot of people want to go to a restaurant where they know they’re sitting next to people who’ve been vaccinated,” Lamont said. “I think it’s something that, given the nature of omicron, given the nature of the infections, it makes people know they can go about their daily lives safely this holiday season.”

Scott Dolch, executive director of the CT Restaurant Association, said Wednesday that his group did not oppose the existence of the state’s digital health card platform, so long as it was a voluntary application and not a requirement. That said, Dolch said few restaurants were clamoring for the technology.

“I could count on one hand how many actual restaurants in the state are mandating vaccines and the ones that are, aren’t really full service restaurants … they’re more bars,” Dolch said.

Vaccine mandates imposed by jurisdictions like New York City have had a detrimental effect on the restaurant industries there and few Connecticut businesses were looking to voluntarily take on the task of policing their customers, Dolch said.

“At the end of the day, the two words that can have the most devastating effect on our industry are ‘mandates and restrictions.’ It keeps guests away. It makes it harder for us to survive,” Dolch said. “The restaurants never signed up to have to police and manage the process. We want to be welcoming to everybody. That’s our industry.”