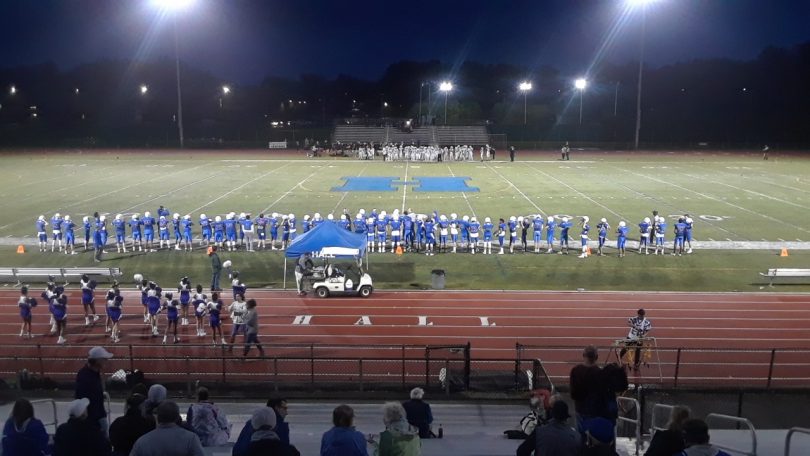 Hall took down South Windsor at Chalmers Stadium to earn its first home victory of the season behind the legs of a multi-faceted rushing attack.

Hall’s win over the Bobcats (0-8) was its first since defeating Simsbury (2-5) in the season opener on Sept. 7.

“The kids have been working hard all year,” said Hall head coach Frank Robinson. “It’s nice to have this result, but it doesn’t diminish what they’ve tried all year. We’ve been in a lot of close games, and thankfully, this one we pulled out.”

Dionicio found the end zone from two yards out to give Hall a 6-0 lead early in the first quarter. A 40-yard carry by Lizardi two plays earlier set the Warriors up on the 6-yard line to eventually finish the drive.

Hall forced South Windsor to go three-and-out, and Dionicio notched a 12-yard rushing touchdown on the ensuing drive. The Warriors took a 13-0 lead with 3:48 left in the opening quarter.

Up two scores, the Warriors recovered an onside kick and continued to keep their offense moving.

Hall’s offensive production was not limited to running the ball.

The Warriors marched the ball down the field after a 50-yard touchdown rush was called back for holding. A few plays after the penalty, Sullivan threw a 10-yard touchdown pass to Gabe Salomons, giving Hall a 20-0 advantage late in the first quarter.

The Bobcats fought back as they converted a fourth down to keep their next drive moving early in the second quarter. South Windsor finished the drive with a 5-yard passing touchdown to cut Hall’s lead to 20-6.

Neither team recorded any official turnovers, but South Windsor was unable to get a punt away deep in its own territory resulting in a turnover on downs at the 4-yard line late in the second quarter.

Nolan Tibball scored on the next play from scrimmage to up the Warriors’ lead to 27-6 with 4:20 left in the half.

The Bobcats got the ball back with 4:15 on the clock and used nearly every second to score before halftime.

A 40-yard completion set South Windsor up in the red zone, and a Hall penalty moved the ball to the 5-yard line. Gabriel Hill eventually ran for a 1-yard score with 9.8 seconds remaining before the intermission.

Sullivan and Salomons connected again for another Hall touchdown to start the third quarter. Baker punched in a two-yard score with one minute left to make it a 41-12 game.

Hill broke open a 52-yard carry in the fourth quarter for his second score of the contest, but the game remained out of reach for the Bobcats, even with a successful two-point conversion to trim the deficit to 41-20.

“Overall, it was good, but there’s just so many things to work on. But that’s true every week. Nothing new.”

With the win, Hall improves to 2-6 on the season. The Warriors will travel to face Windsor (5-2) on Friday before returning home for the Mayor’s Cup against Conard (3-5) Saturday, Nov. 17.

“I haven’t seen any film on Windsor yet, but I’m sure they’re fantastic,” said Robinson. “Rob Fleeting does a great job of coaching them just like Coach [Dave] Hodge does for South Windsor. We still are making mistakes and we need to clean that up, so if we get closer to a perfect game, then we’ll be in good shape.”