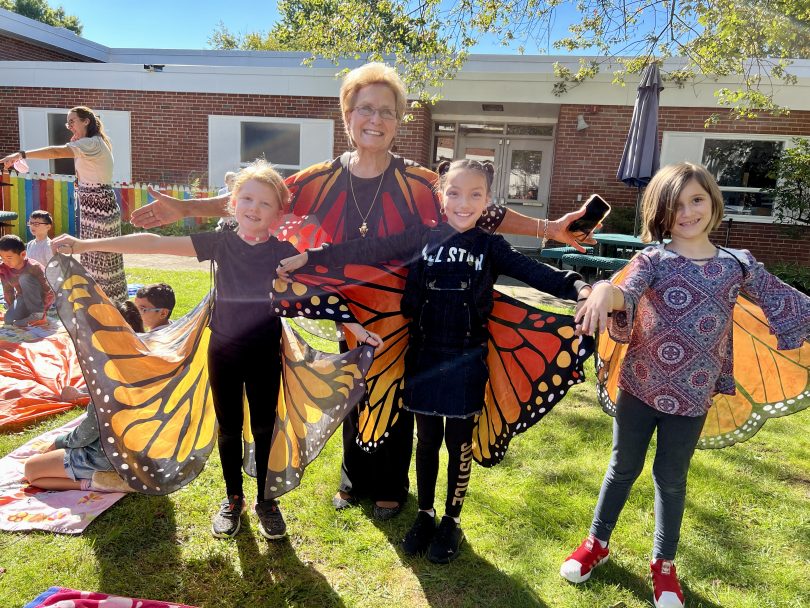 The Webster Hill Elementary School community gathered for a courtyard assembly Wednesday morning, which ended with a delightful surprise. 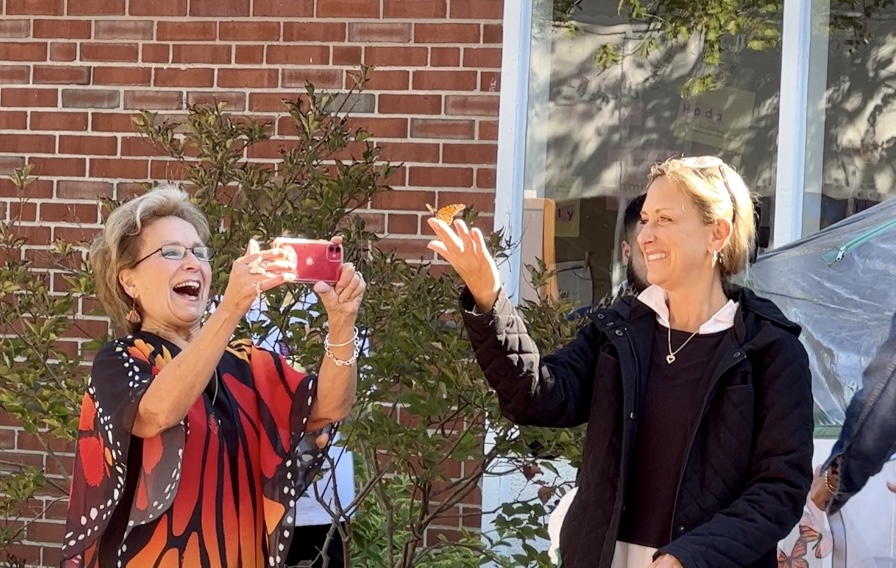 Lynn Rosenblatt (left) takes a photo of a monarch on the hand of her daughter, Teri Tevlin, during the Webster Hill butterfly assembly. Photo credit: Ronni Newton

Monarch butterflies had their day Wednesday at Webster Hill Elementary School, a celebration that concluded with a delightful surprise.

Webster Hill has become known in West Hartford as the “butterfly school” for the past quarter century, so important to the school’s mission that the monarch butterfly has been incorporated into the logo and even became part of the building’s architecture when an addition was built in the late 1990s. 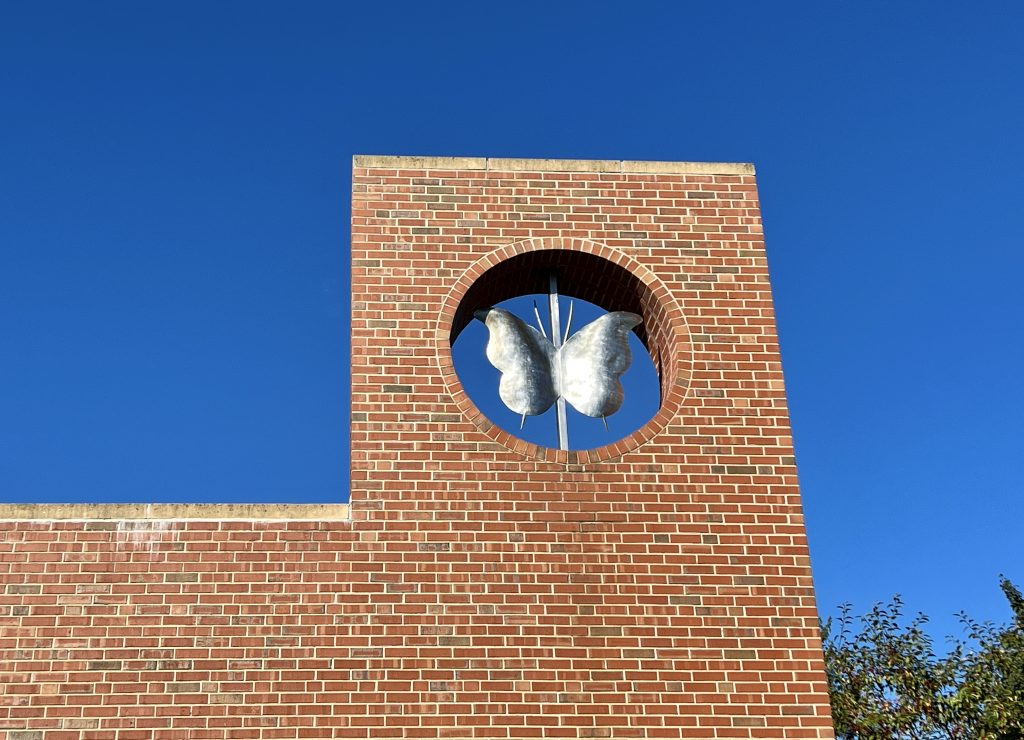 A butterfly sculpture is embedded in the architecture at Webster Hill Elementary School in West Hartford. Photo credit: Ronni Newton

It’s ingrained in the culture and the curriculum.

Students in all grade levels, from Pre-K through grade 5, have raised monarch butterflies in their classrooms, nurturing them in all stages from egg, to milkweed-munching caterpillar, to chrysalis, to the metamorphosis into a beautiful orange and black butterfly that would live in the butterfly house in the school’s courtyard for a short time before being released to begin its amazing journey to Mexico for the winter. Students then tagged the butterflies and would track the journey.

From the beginning the annual butterfly release, generally held in mid- to late-September, was a signature celebration at Webster Hill. More than 100 monarchs were released in 2019.

The history of the butterfly release at Webster Hill dates back in 1997 when, with assistance from a grant, some very hard-working parent volunteers transformed unused and neglected space in the school’s courtyard, turning it into the “Living Courtyard” into a science and research center, and creating an environment to attract and nurture monarchs.

During the past two years, however, because of the COVID-19 pandemic and the inability to gather in large group or have outside volunteers in the school, and because the overall population of monarch butterflies has been on the decline, monarchs had to be celebrated in a different way. For 2020 and 2021, a parent volunteer created a special video, which could be viewed by the entire school community, to continue to honor the school’s long-standing tradition in a meaningful way. 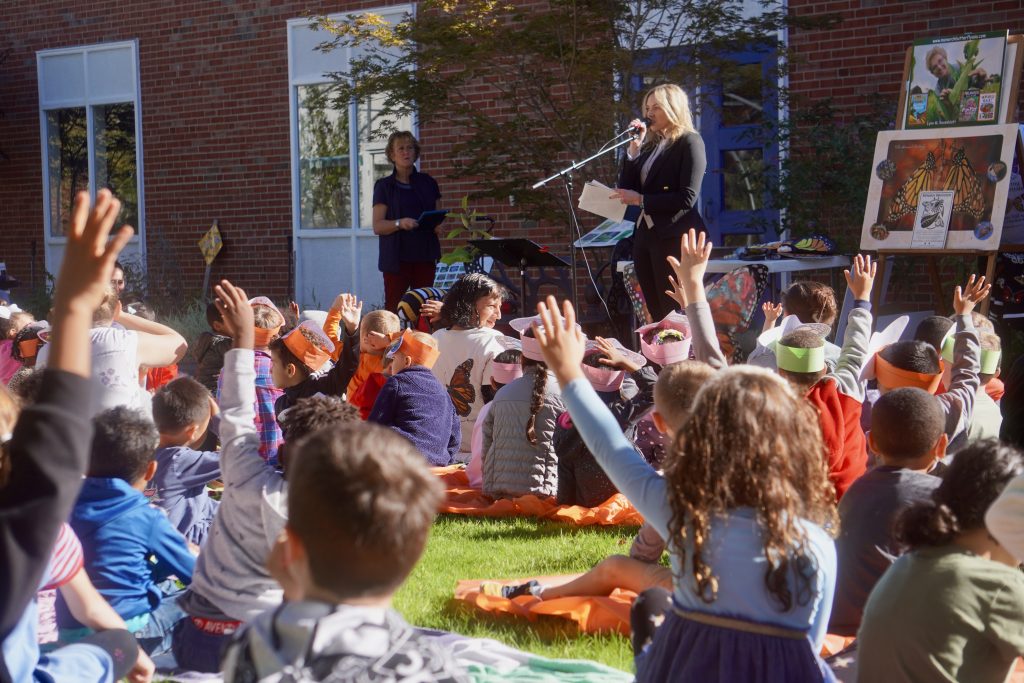 “To the Pre-K, kindergarten, and first graders, this is brand new,” Behrens said, and it was a great opportunity to refresh in the minds of the other students just how special Webster Hill’s butterfly tradition is.

Wednesday’s assembly was highlighted by a a visit from Lynn Rosenblatt, a former teacher at the school, photographer, and author of three books on monarchs. 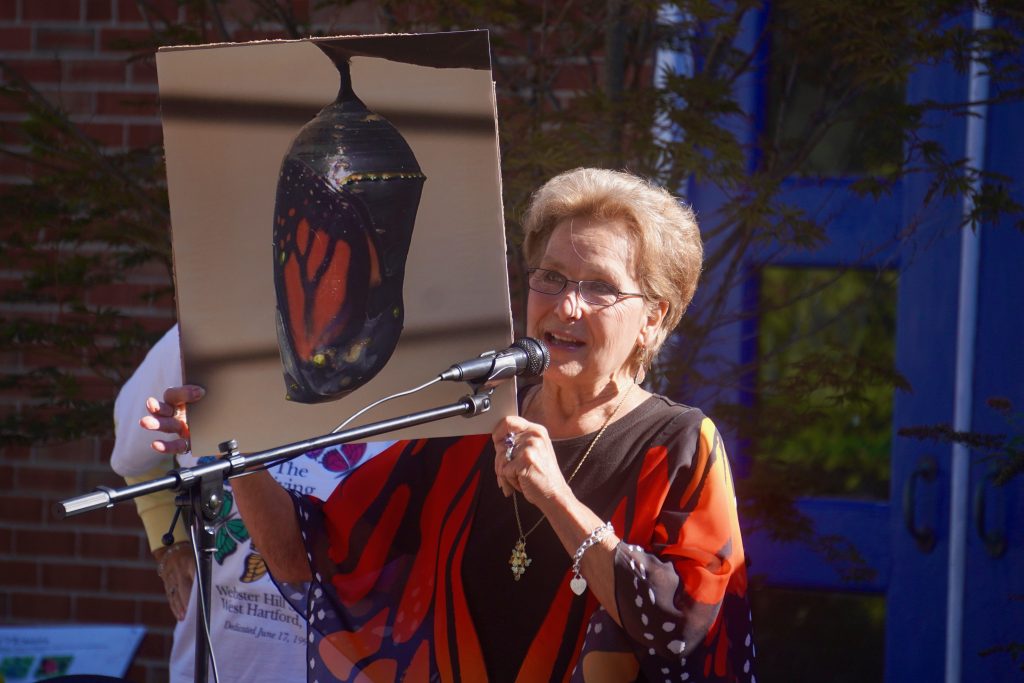 Dressed in a monarch cape, and sharing her striking images of monarchs at each stage of their lifecycle, Rosenblatt gave the students a mini-lesson on the butterfly, and how important it is to preserve milkweed because it’s the monarchs’ food source. Many of the youngest students had decorated butterfly crowns that they wore during the assembly and other students wore butterfly wing capes.

“Boys and girls it’s up to you, and everybody from here on in, to do something to help the monarchs,” Rosenblatt told the students. “And this beautiful garden, this gorgeous courtyard, you have all the chance here to do what’s very special for the monarchs.” 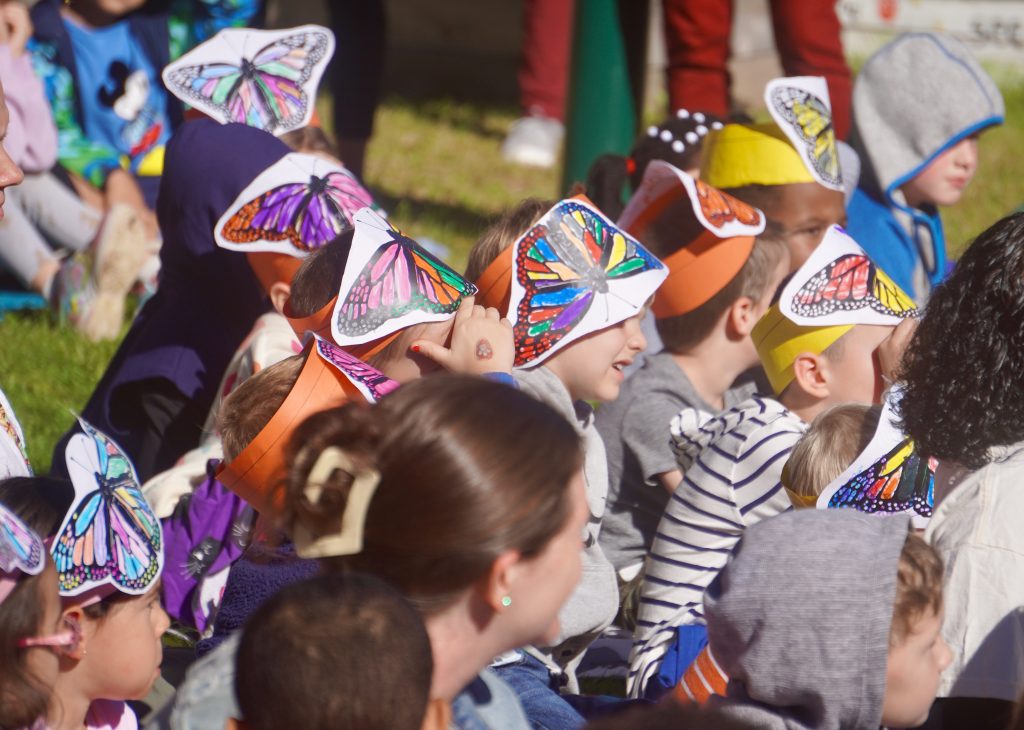 Rosenblatt, who along with her sister, Jill Nova, also a retired Webster Hill teacher, has been helping with the rejuvenation of the living courtyard, including ensuring there is adequate milkweed there and elsewhere around the school. Others have spent endless hours weeding and otherwise refreshing the garden, creating a hospitable habitat for monarchs and other pollinators.

A new net is needed for the special butterfly house enclosure, and while the school was facing potentially cost-prohibitive estimates to replace it, representatives from the Children’s Museum, which is in the process of relocating from its home at 950 Trout Brook Road in West Hartford, read about Webster Hill’s need in a recent We-Ha.com article. They have already donated signage, plants, and other items from their butterfly house, which is not being moved to the temporary location. 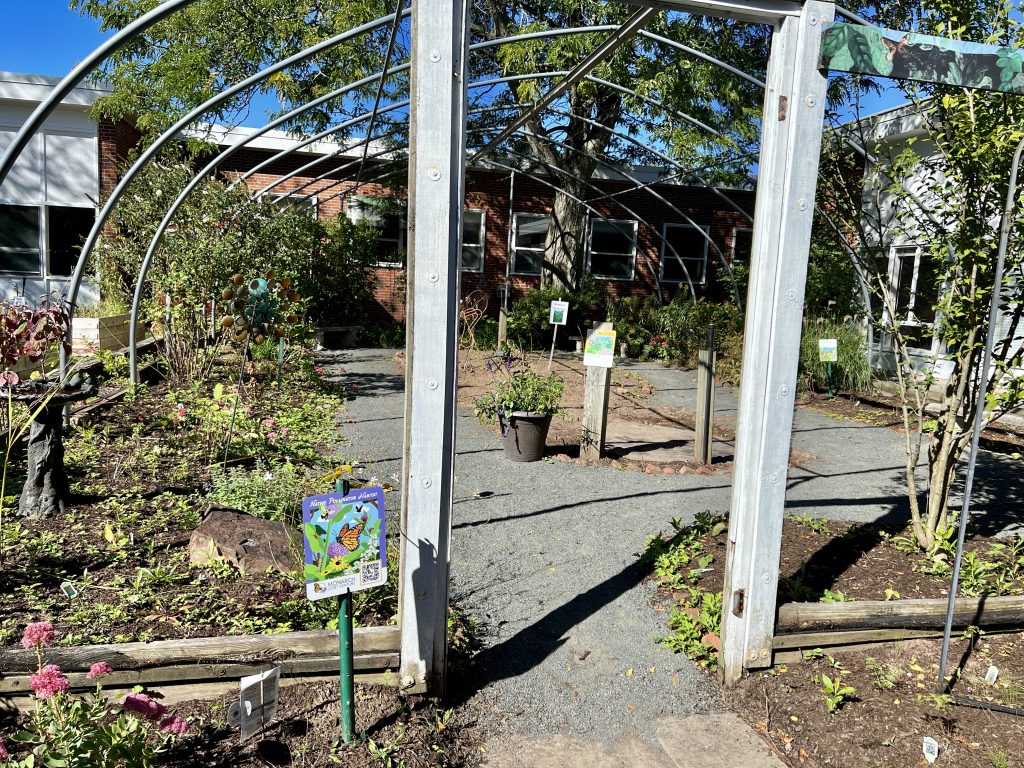 The Living Courtyard at Webster Hill has been refreshed, and has signage donated by the Children’s Museum. Photo credit: Ronni Newton

The Children’s Museum is also potentially solving the net dilemma by donating their net to Webster Hill. It’s larger, but Behrens hopes there is a way to make it fit.

“They’ve also provided a lot of advice,” said Beth Cannone, a Webster Hill Pre-K teacher who is spearheading the courtyard updates. That includes advice about some more reasonable net options if theirs can’t be made to fit.

This year, Rosenblatt helped create a special surprise that added to Webster Hill’s celebration of monarchs. Only a handful of caterpillar eggs were found on the school property this year, but Rosenblatt’s daughter, Teri Tevlin, has been growing milkweed and had plenty of eggs at her East Hampton home. She raised and donated about 50 caterpillars, so each class had at least one to observe. 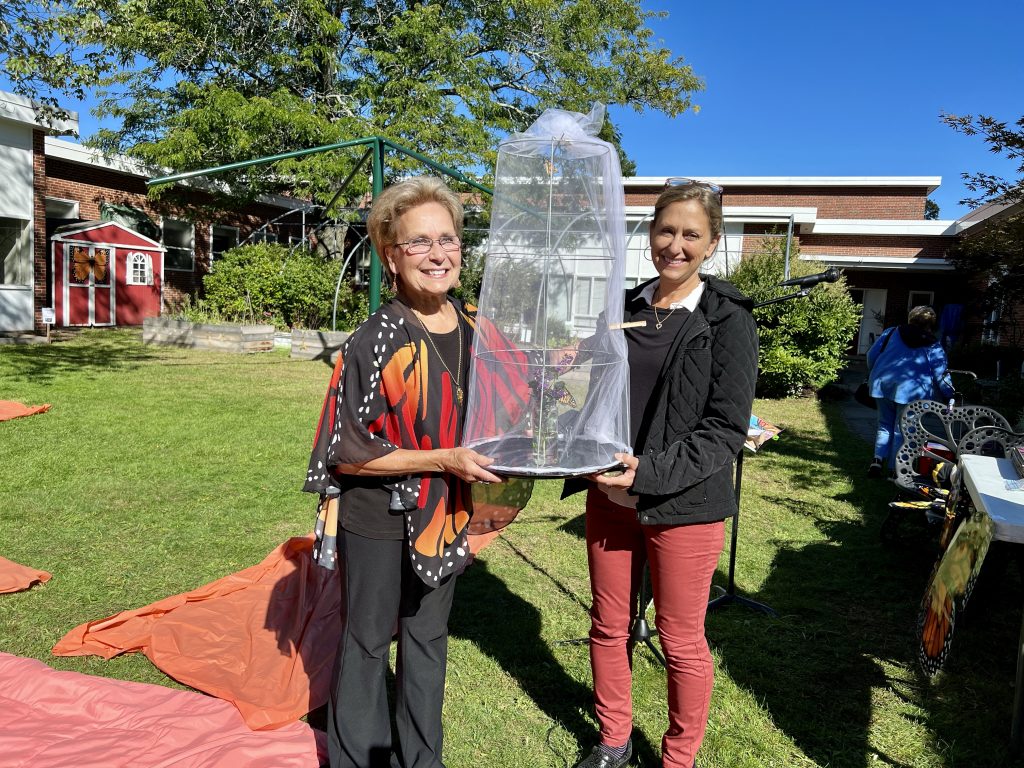 Lynn Rosenblatt (left) and her daughter, Teri Tevlin, bring several newly-emerged monarchs into the courtyard to be released during an assembly. Photo credit: Ronni Newton

Inside a small tent-like butterfly enclosure several monarchs that had recently emerged from their chrysalises were waiting, flapping their wings and warming up in the sunshine.

A special surprise butterfly release happened at Webster Hill this week. Something about it is just so touching. #WestHartford #monarchbutterfly pic.twitter.com/LZZH5nowfp

Tevlin held up one of the butterflies on the tips of her fingers, and after a few moments it flew off to the delight of the children, and the adults. The others soon flew out of the tent, circled the courtyard, and began their journeys, too.

Over the week or two some monarchs had already emerged and had been set free, but having it happen at the assembly is different.

“They are so excited whether it’s three or 300,” Behrens said. There’s just something so special about the celebration.

More information about Rosenblatt’s work can be found at www.monarchbutterflyusa.com. 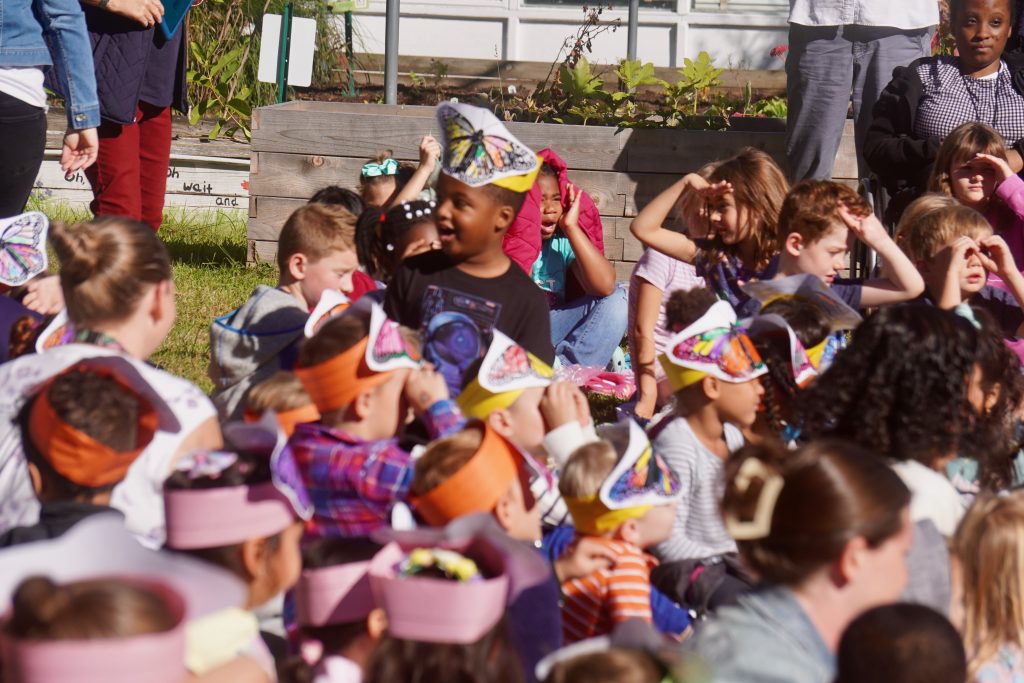 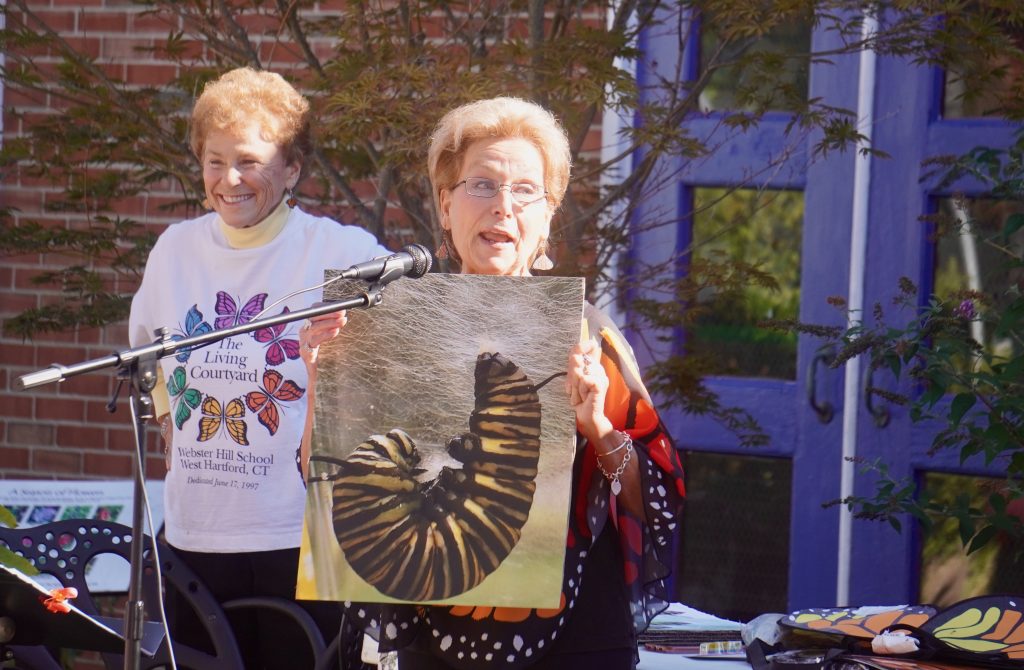 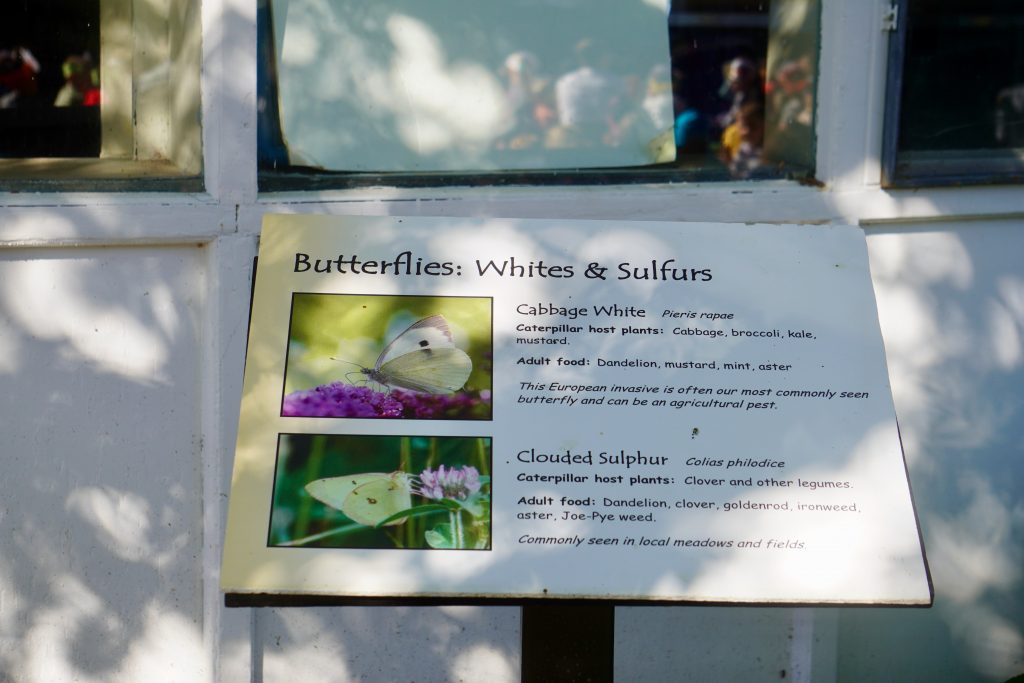 The Living Courtyard at Webster Hill has been refreshed, and has signage donated by the Children’s Museum. Photo credit: Ronni Newton 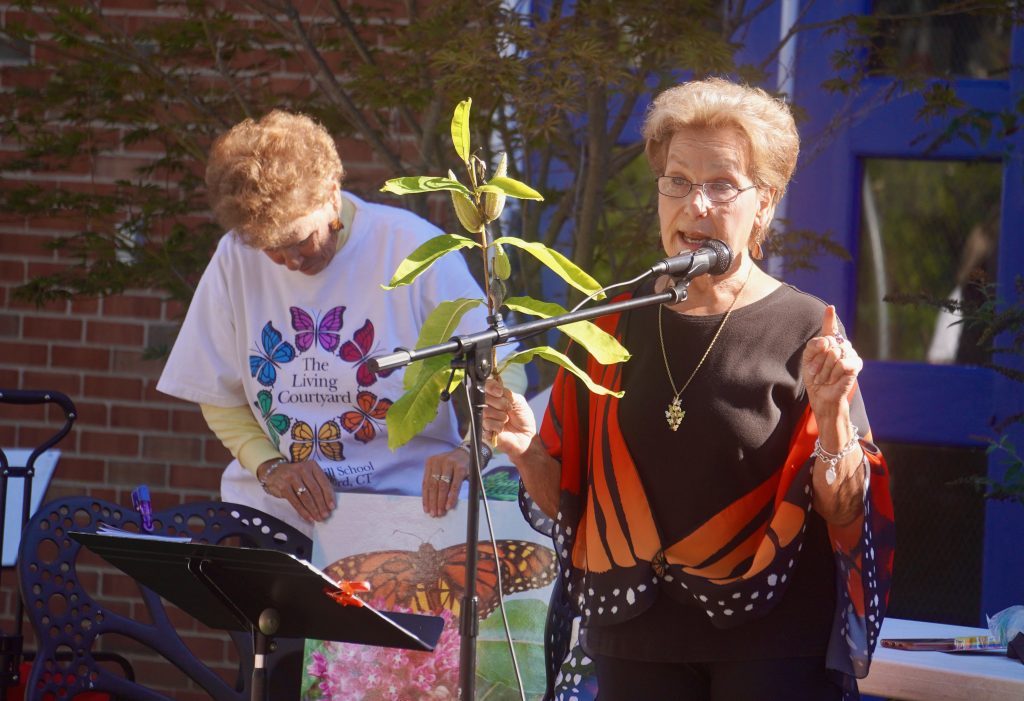 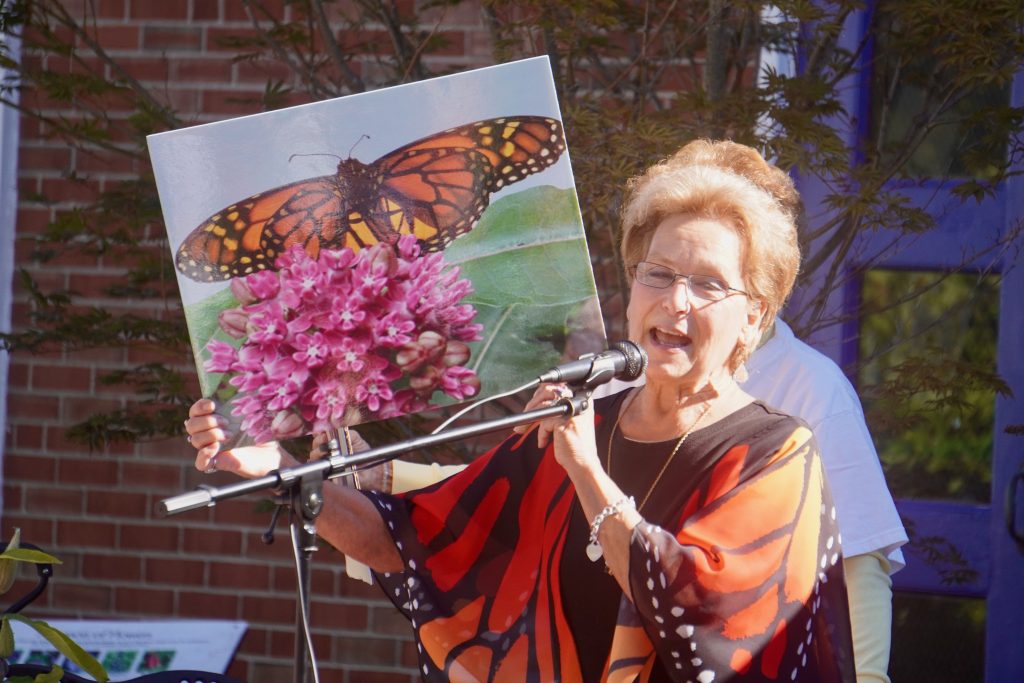 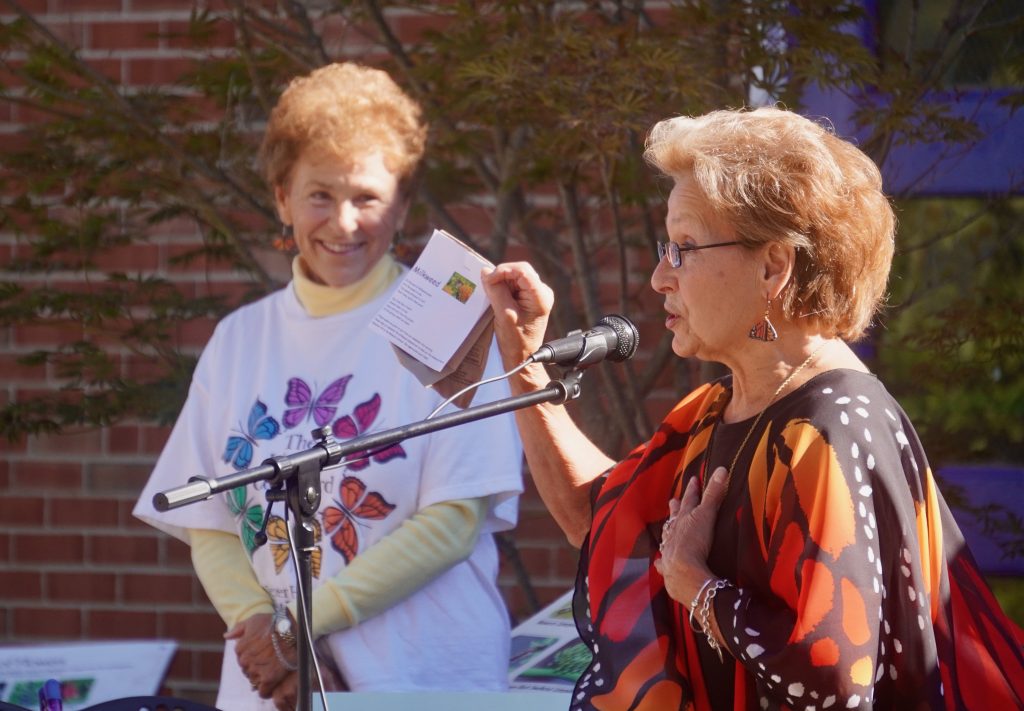 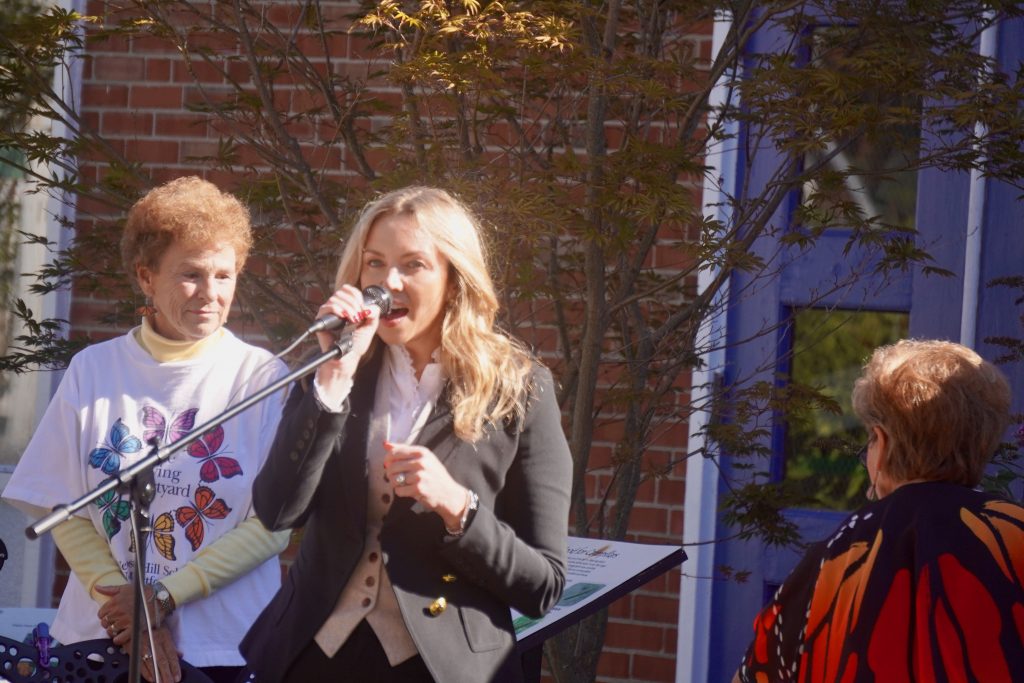 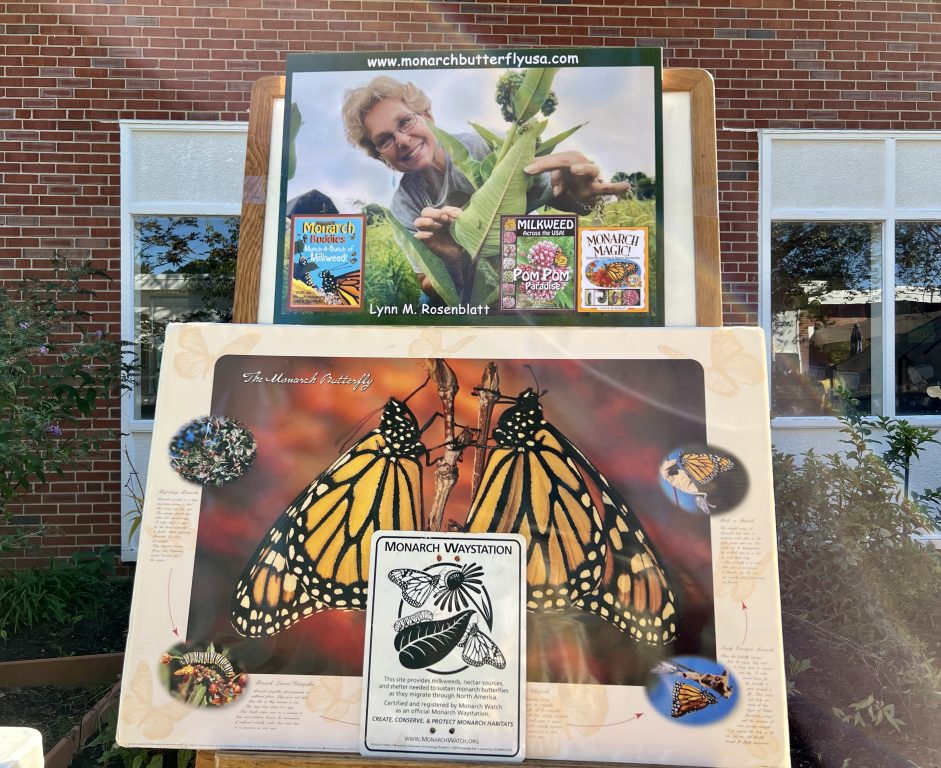 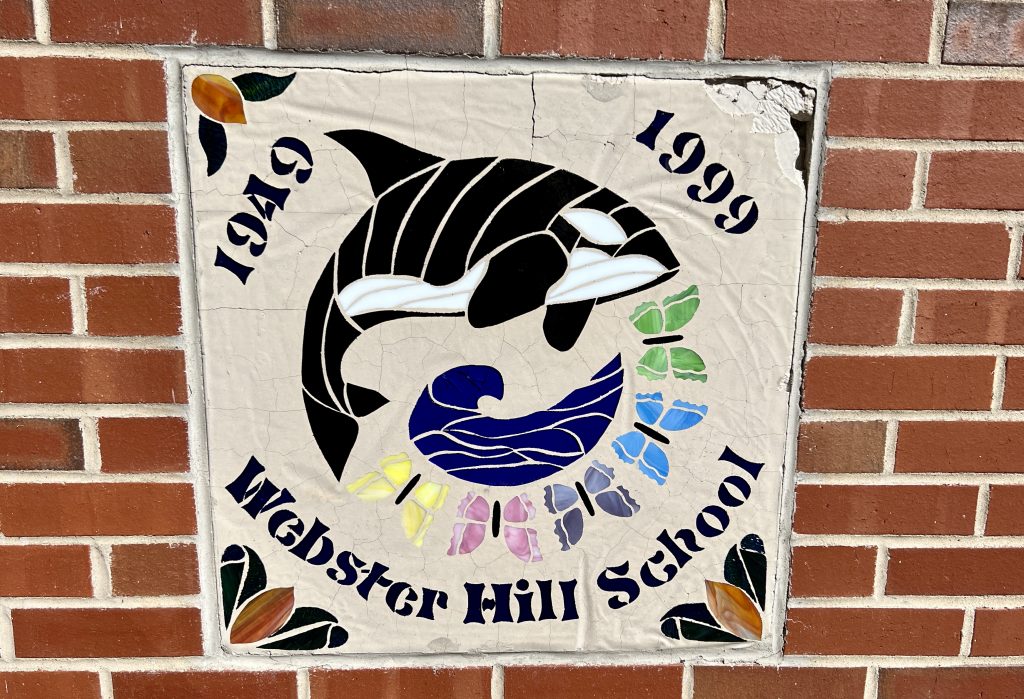 Webster Hill’s logo was updated in 1999 to include butterflies. Photo credit: Ronni Newton