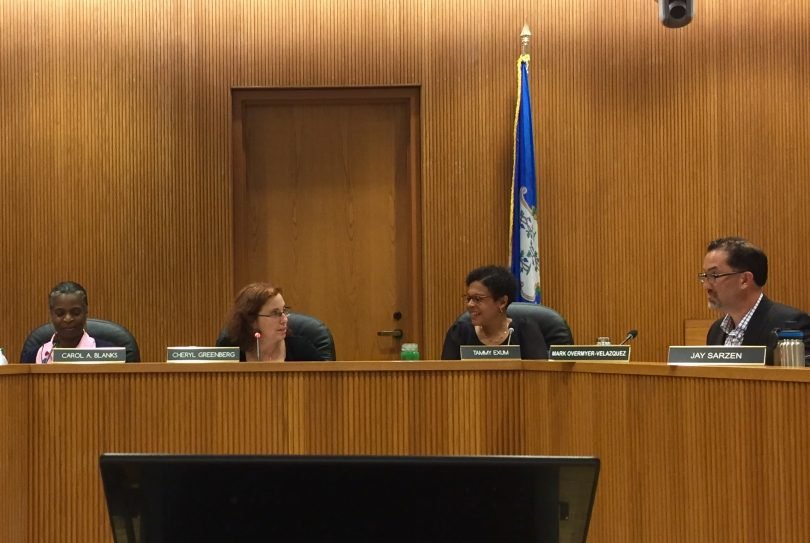 Dr. Cheryl Greenberg (second from left) has been elected as chair of the West Hartford Board of Education. Carol Anderson Blanks (left) is vice chair and Tammy Exum (second from right) is now secretary. Dr. Mark Overmyer-Velazquez (right) has stepped down as chair but will remain on the board until his term ends in November. Photo credit: Ronni Newton

Dr. Mark Overmyer-Velazquez, who was recently named director of UConn’s new Hartford campus, resigned as chair of the West Hartford Board of Education and Dr. Cheryl Greenberg was elected as new chair.

A change of leadership of the West Hartford Board of Education took place Tuesday night following the resignation of Dr. Mark Overmyer-Velazquez as chair.

Overmyer-Velazquez, who was appointed the director of the UConn Hartford campus and stepped into that role on Aug. 23, 2017, said the demands of his new job would make it difficult to fulfill the responsibilities of Board chair.

The Board of Education unanimously elected Dr. Cheryl Greenberg, who formerly served as vice chair, as chair.

“Mark you’ve done an amazing job,” Greenberg said. She noted that her serving as chair only lasts until the November election –  “and then whatever happens happens.”

The Board also received the “Opening of School” briefing from district leadership at Tuesday night’s meeting. All reports are also posted online as part of the meeting agenda on the Board of Education’s website.

In his Superintendent’s overview and report, Tom Moore said that despite the budget uncertainty on everyone’s minds, school was off to a very good start, with people remaining optimistic and understanding the “seriousness of their purpose.” He said that the needs of all of the kids and families are being met.

Assistant Superintendent of Curriculum, Assessment and Instruction Paul Vicinus was not able to attend the meeting, but Director of Pupil Services Gretchen Nelson delivered his report on the District Development Plan – the strategic focus for the district – which includes as a key goal of an increase in achievement and reduction of disparity among groups.

Assistant Superintendent for Administration Dr. Andy Morrow provided an update on plant and facilities, information technology, and transportation. As he and Moore had noted in an interview with We-Ha.com prior to the start of school, Morrow said in his report that many small and several large capital improvement projects, as well as routine maintenance and cleaning, took place over the summer. An outline of all of the updates can be found here.

Morrow also noted that the district’s Wi-Fi system has been replaced with more than 900 new access points and controllers, increasing reliability and speed. More than 1,700 new devices were deployed to replace those that were broken or had outlived their life expectancy, including 431 new iPads, 1,087 new Chromebooks, and 239 Windows devices.

Transportation for the new school year will be provided for approximately 5,357 students on 93 buses, with 228 runs, Morrow said. Minibuses, which are used in the transport of preschoolers, have been equipped with permanently-installed five-point integrated carseats.

Executive Director of Human Resources Rick Ledwith said that 46 new contracted teachers and 11 interim teachers – not all of whom are full time – have joined the district this year, in addition to two administrators.

“The quality of the teachers we had to chose from this time, along with the quantity, are as strong as they have ever been,” Ledwith said. The new teachers were chosen from a pool of approximately 2,000 applicants, and most were the first choice of the hiring principal or supervisor.

The turnover rate was 5.6 this year, in comparison to 5.5 percent last year and 6.1 percent the year before. There were 27 retirements, up from 19 the previous year, Ledwith said.

The diversity of the teaching staff continues to be a major goal, Ledwith said. The diversity rate of new staff is 22 percent this year, in comparison to 24 percent last year and 22 percent for several previous years. “We need to continue to build on that success and increase the numbers,” Ledwith said.

A small amount of money was set aside in this year’s budget to allow for attendance at a Historically Black College and University (HBCU) recruitment fair.

Reporting on updates in the Pupil Services Department, Director Gretchen Nelson said that 18 new certified and professional staff have been hired, primarily to replace teachers who have retired as well as a few who left the district, and paraprofessionals are in place to meet all student service requirements. The district received a “Meets Requirements” designation from the State Department of Education – the highest designation awarded, she said.

A positive overall response was received from participants in the extended school year (ESY) program which over the summer served a total of 315 students from pre-K through postsecondary. The program ran four days per week for six weeks, Nelson said.

Director for Continuing Education and Diversity Advancement Roszena Haskins reported that this summer there were 653 students – from 30 different towns and 36 high schools – enrolled in the inter-district summer high school program at Conard High School. Particularly successful offerings were the “Summer Jazz Jam” and “Maker It So.”

Haskins also said that 537 have taken advantage of adult enrichment continuing education courses, and graduation for those receiving the National External Diploma Program (NEDP) will be held on Thursday, Nov. 9.

Director of Finance and Planning Chip Ward said in his report that the school year opened with 9,435 students – “almost exactly the same as last year and a lot more students than projected.”

On the elementary level, there were a total of 203 sections budgeted and ultimately are 204 sections in place. Only one – a kindergarten class at Charter Oak International Academy which currently has 23 students – is above class size guidelines. The class size is being watched carefully, he said, and average elementary school class size is 20.2, up from 19.7 last year.

Kindergarten, where there are 65 more enrolled than anticipated, is the most difficult to project, since it’s based on birth rates, Ward said. It’s “overall a good sign” for West Hartford that while many districts are seeing declining enrollment of 10 percent, West Hartford’s enrollment decline is only about 5 percent from its peak.

Ward said there are a total of 44 more students in middle school than projected this year, and high school enrollment is up by 35 students. However, Ward said, high school numbers usually decrease by Oct. 1, the date of official enrollment. Last year the overall number of high school students dropped by 28 between the first day of school and Oct. 1, Ward said.

Overmyer-Velazquez asked Moore about how the town will respond in light of the news released earlier in the day that President Donald Trump will end the Deferred Action for Childhood Arrivals program.

Moore said that while the news is too recent for a plan to be put into place, “You go to West Hartford Public Schools if you live in West Hartford,” and students are not asked where they originally come from. “Rules that have been in place … is that an ICE agent couldn’t go into a public school anyway,” Moore said.

“Our children need to know that they’re home when they’re in our schools. They’re our kids,” Moore said.