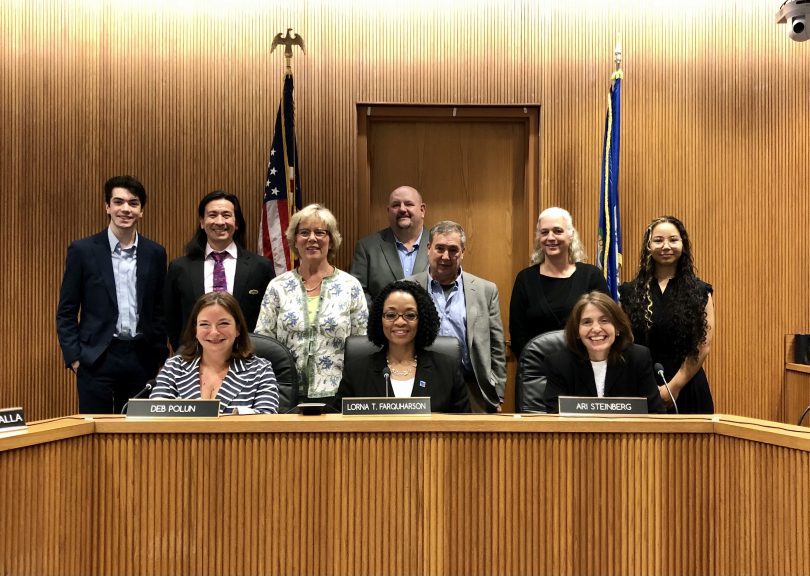 The West Hartford Board of Education elected a new chair, vice chair, and financial examiners, and swore in newly-elected members Tuesday night. 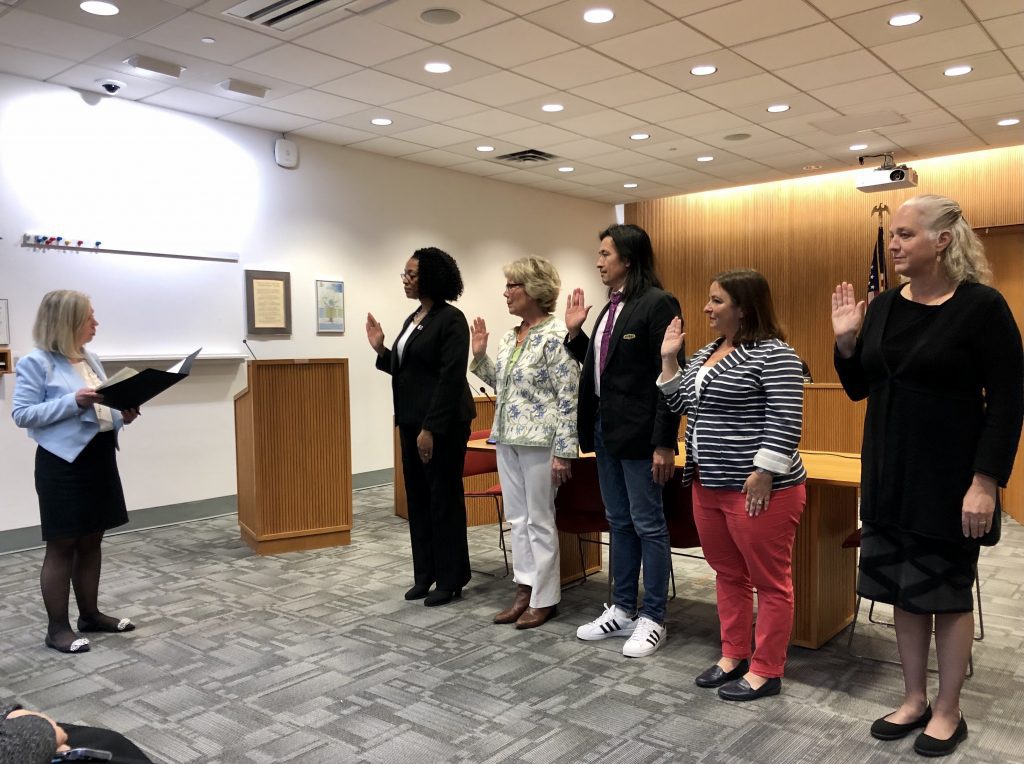 The West Hartford Board of Education welcomed new members – and new leadership – Tuesday night, along with bidding goodbye to several members who were ending their service.

The Board bid goodbye to Democrat Amanda Aronson and Republican Liz Wilcox who did not seek re-election, and Republican Mark Zydanowicz who was elected to the Town Council earlier this month. Resident Ethan Goldman was nominated, and unanimously approved, to take Zydanowicz’s seat. 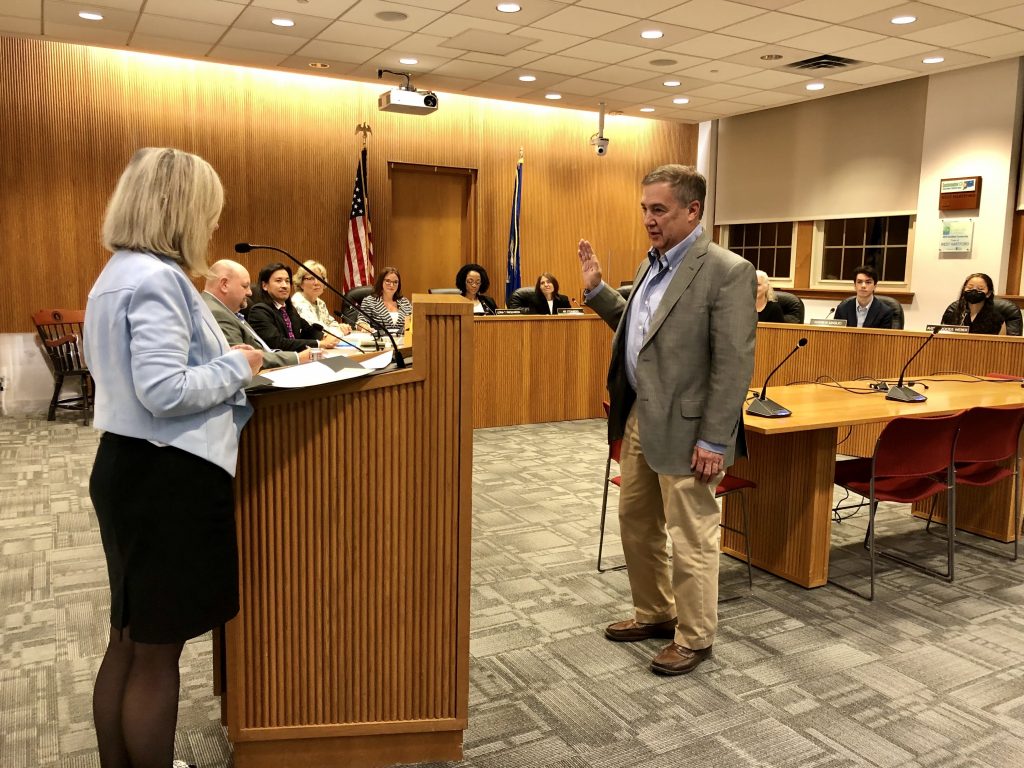 Ethan Goldman (right) is sworn in by Town Clerk Essie Labrot. He was appointed to replace Mark Zydanowicz, who resigned from the Board of Education after being elected to the Town Council. Photo credit: Ronni Newton

Thomas-Farquharson, who previously served as vice chair of the Board, was unanimously elected to serve as chair.

Polun, who had served as chair since 2019, was unanimously approved as vice chair, and Ari Steinberg was approved as secretary.

Board members shared some remarks about those who were ending their service on Tuesday.

“One thing that I have appreciated serving on the Board is to learn from you how to see the whole student,” Chang said of Aronson.

“I appreciate all of the hard work you have done during the short time you have been on the Board,” Steinberg told Aronson, who was appointed in July 2019 to finish out the term of Cheryl Greenberg. She commended Aronson for always taking “the time to pause,” and make sure everyone has clarity on any issue being discussed.

“I truly appreciate your perspective on the Board as well as your friendship,” Polun told Aronson.

Wilcox said she has known Aronson for many years, from working together on fundraisers for The Bridge Family Center, and said she appreciated having a friend on the Board when she joined in the middle of the pandemic.

“Amanda is the most genuine person, ” Wilcox said. “She has a heart of gold, and I’m pretty sure I’ve never heard her say a bad word about anyone.”

Chang and Steinberg both praised Wilcox for her attention to detail. “I really appreciate that whatever topic was discussed you really responded with a very thoughtful and attention-oriented question,” Steinberg said.

Aronson said Wilcox is such a “clear thinker” and clear communicator, who approached decisions “always with a child-centered focus.”

Zydanowicz, the only other Republican on the Board, didn’t know Wilcox prior to her appointment to fill the seat vacated by Robert Levine in May 2020.

“You came in very seamlessly,” Zydanowicz told Wilcox. The learning curve was almost not there … you immediately made an impact.”

“I really appreciated the nine years, the institutional memory you bring to this,”  Chang told Zydanowicz, who had the longest tenure on the Board of Education.

Thomas-Farquharson said she also appreciated Zydanowicz’s experience, and the “assertive way in which you would express your opinions,” always with respect and for the good of the children. Even when they would agree to disagree, and were on different sides of the aisle, she said, “we’re in the same auditorium watching the same show.”

Aronson said Zydanowicz is “an incredible family man” whose large car is almost always full of children. He has always “led with community first,” and she knows he will be at the Council table supporting education.

Each of the outgoing Board members also spoke briefly before the meeting adjourned.

“This has been a privilege of a lifetime to serve our community during this time,” Aronson said.

“I am leaving here knowing how lucky I am as a parent to live in this town,” she added.

“It has been a pleasure and a privilege to serve alongside all of you,” said Wilcox.

Zydanowicz thanked his wife and children for putting up with his past nine years of service on the Board.

During that time he worked on many important issues including measures to make schools safer in the wake of Sandy Hook, the decision to change the high school logos, discussions about school start times, construction of the new Charter Oak International Academy building, and the pandemic, and was part of the team that hired Tom Moore, whom he said is the board’s watchtower, “a true leader … you’ve really showed a beacon of leadership.”

He said he was thankful to be able to speak at his oldest daughter’s graduation, at convocation, and at ceremonies for military inductees.

“I hope through all these times I didn’t bring ideology to the table,” Zydanowicz said. It was always about passion, he said, “always about the kids.”