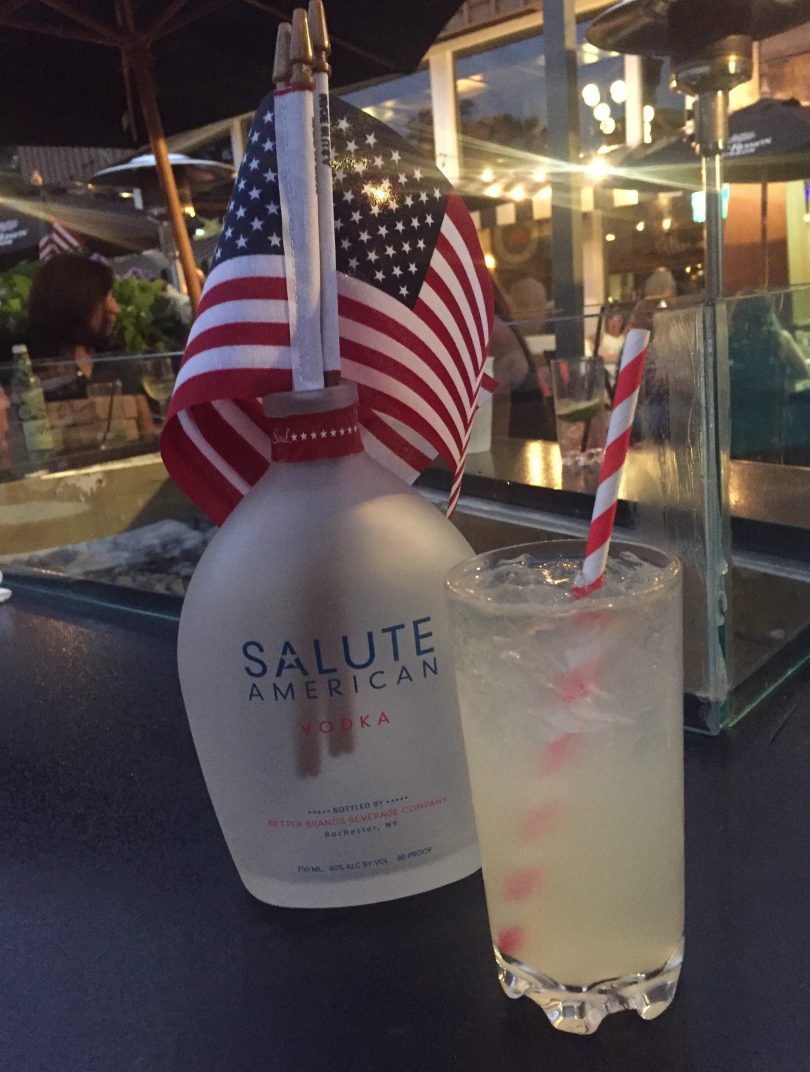 Salute vodka and lemonade was a signature drink at the brand's promotional event at Butchers & Bakers in The Exchange in Farmington. Photo credit: Ronni Newton

The Sinatro brothers, along with several other investors, have purchased Salute American Vodka, an all-American company that gives back to veterans with every sale it makes.

When the Salute American Vodka RV rolled into the parking lot of Butchers & Bakers at The Exchange in Farmington last week, it became a key element of the “Tastes Like ‘Merica Backyard BBQ” event that Locals 8 was hosting at its newest restaurant. 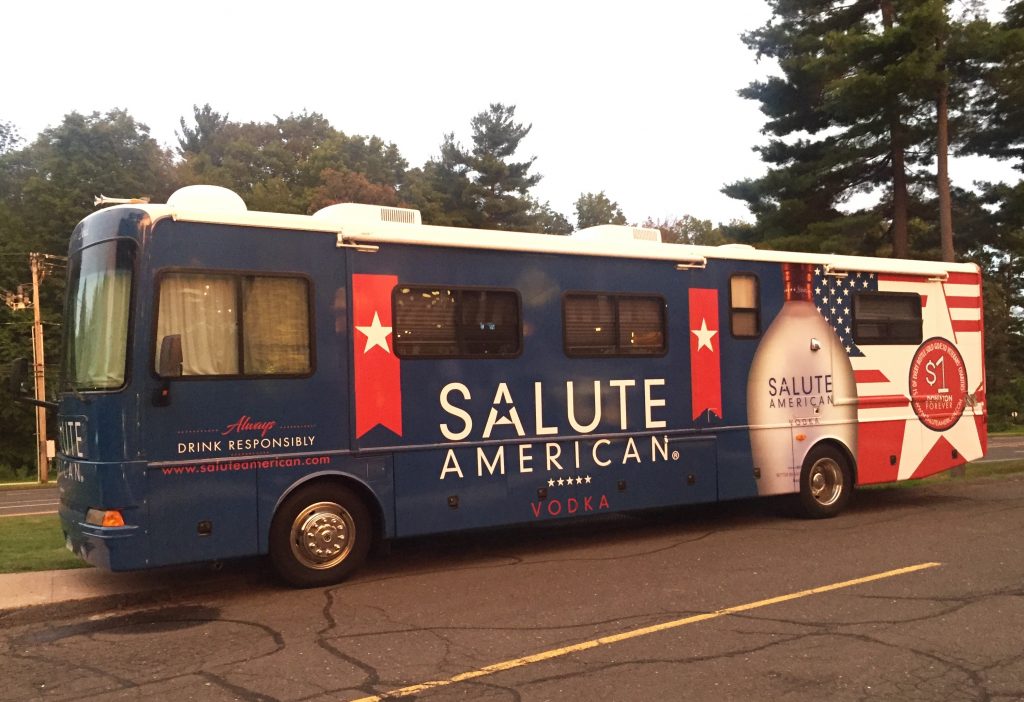 Salute was an important ingredient in the watermelon and lemonade cocktails being mixed up behind the bar, but to Trey, Mark, and Steve Sinatro, who along with several other investors in Handcrafted Brands purchased Salute last summer, the brand has spirit beyond other spirits.

Not only is Salute is 100 percent certified American-made vodka – including every part of the bottle – but $1 of the purchase from every bottle is donated to support veterans’ organizations that provide educational and career services.

Trey Sinatro said that his brother Mark’s friend and fellow former UConn athlete, Scott Sweitzer, was in the promotional business, and that’s how they learned about the opportunity to purchase Salute from its original owners who founded the company in 2012 and launched the brand in 2013.

“Our father was a huge veteran’s advocate,” Trey said of Pat Sinatro, a U.S. Air Force veteran who passed away in May 2015 at the age of 87.

Pat was involved with the Connecticut Veterans Memorial in West Hartford, the Fallen Veterans Memorial, the traveling memorial to the Global War on Terror, Trey said. “As we delved more into it, and knowing how our father supported veterans, we knew that even the numbers weren’t as important as the mission – giving back like our dad did.”

Every 750ml bottle, which retails for $19.99, goes toward helping veterans pursue further education, or start a new business, to pursue their American dream.

To celebrate the local launch of the brand in the Hartford area, Trey was joined last week at Butchers & Bakers by his wife, Mary Rose Sinatro, his brother Mark Sinatro, Salute President Brian Hughes, and Salute Operations Manager Mike Lutz. Ryan Dunne, a young Army veteran who recently served in Afghanistan and has been hired to do marketing for the brand was also on hand, as was John Niekrash of Connecticut-based Work Vessels for Vets, Inc., one of Salute’s non-profit partners.

Since the Sinatros became involved with the brand, sales have skyrocketed, Lutz said. In addition to its original markets of Missouri, Florida, Illinois, and Michigan, Salute can now be found in Boston, St. Louis, and Kansas City, and was launched in Virginia just last week.

“We’re on track to sell more this year alone than in all the years prior,” Lutz said. And that translates into more money for veterans.

Lutz said that Salute has been available in Connecticut since June 2016, but got a major boost when top distributor Brescome Barton saw the work that Salute was doing with organizations like Vessels for Vets and took on the brand in April 2017. Brescome Barton helped launch a Salute tour with a team that included former NFL player and Super Bowl champion Tony Siragusa and Lt. Gen. (Retired) Ray Palumbo.

Niekrash said so far Work Vessels for Vets has received $80,000 in donations from Salute to assist in its mission of helping veterans set up their own businesses when they are discharged. Work Vessels for Vets provides vehicles and other modes of transportation, as well as scholarship money and electronics in order to help veterans become self-reliant. Those veterans in turn hire other veterans, increasing the impact of the initial investment, Niekrash said.

“It’s the only charity of its kind,” he said. As an example, he said, some of the money from Salute was used to purchase a lobster boat for a veteran, Niekrash said.

“I started this job because I heard about the impact it has on veteran’s lives, and families,” Dunne said.

According to Trey, as a veteran Dunne is a key part of the business and is helping further its mission of becoming the number one spirit contributor to veterans’ charities nationwide.

Salute is now available in about 300 places in Connecticut, at package stores as well as restaurants and bars. More information about locations can be found on the website.

“It’s been increasing exponentially,” Dunn said, even outselling popular and highly-regarded brands like Tito’s in some places.

Hughes said that many bartenders, and customers, appreciate the connections with veterans, as well as the all-American image, but the 80-proof vodka, which is distilled four times for a thicker pour and smooth, clean, and odorless taste, has also won awards like a gold medal (Great Value) in the 2017 Ultimate Spirits Challenge and silver medal at the 2017 San Francisco World Spirits Competition

Salute’s headquarters are in Branford, and the product is bottled and distilled in Rochester, NY. The vodka is made from a corn/wheat blend, from grains grown in the midwest.

The shape of the bottle – another nod to veterans – mirrors a WWII canteen. The bottles are made in New Jersey.

“Our country doesn’t do enough for veterans,” Niekrash said. “If the government isn’t going to do it here, we are going to.”

“The VA [Veteran’s Adminstration] does the best they can, but company’s like [Niekrash’s] fill in the gaps,” added Dunne.

Trey said that he and his brothers, Mark and Steve, believe that with the new business they are continuing their father’s legacy and mission. 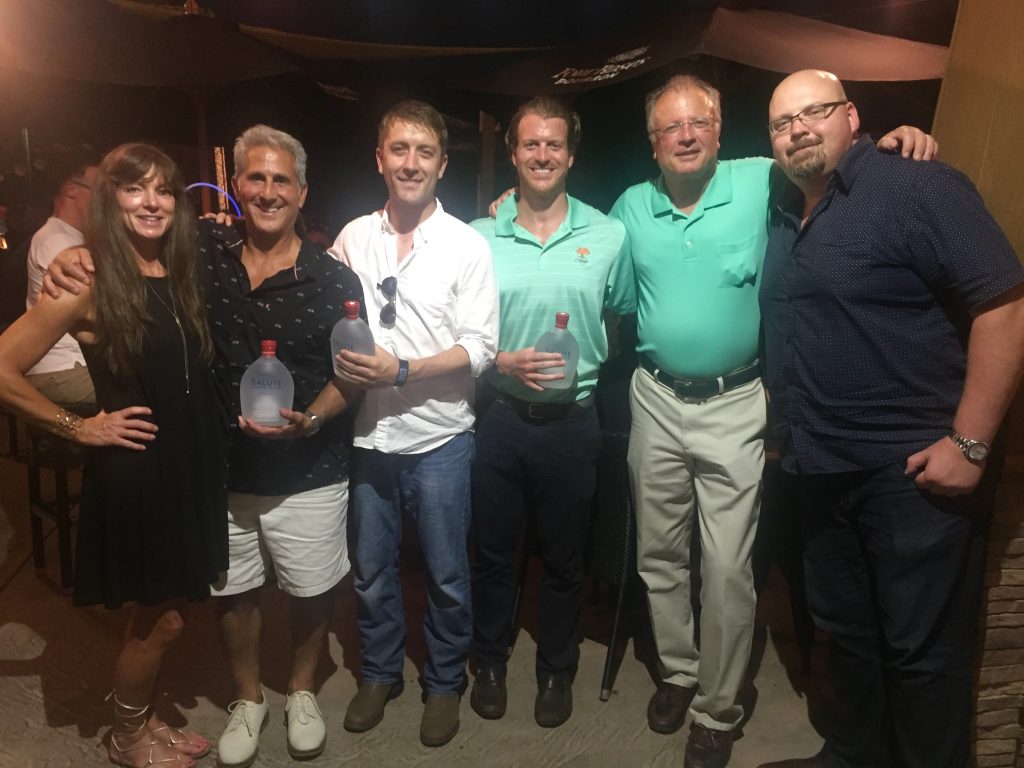 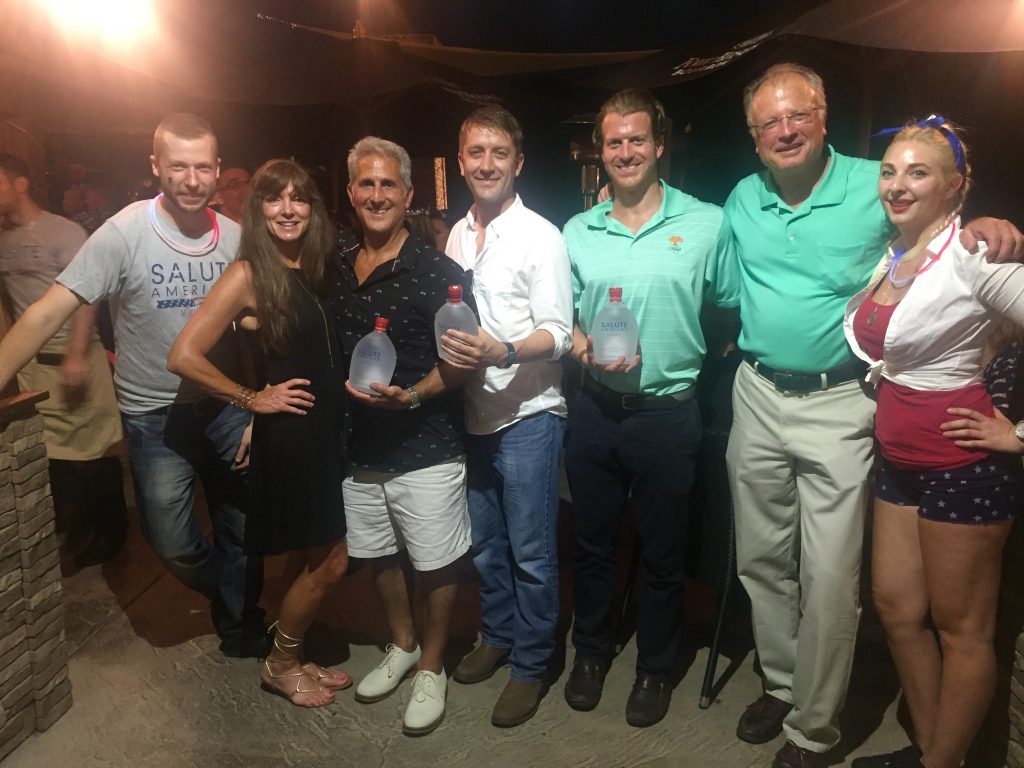