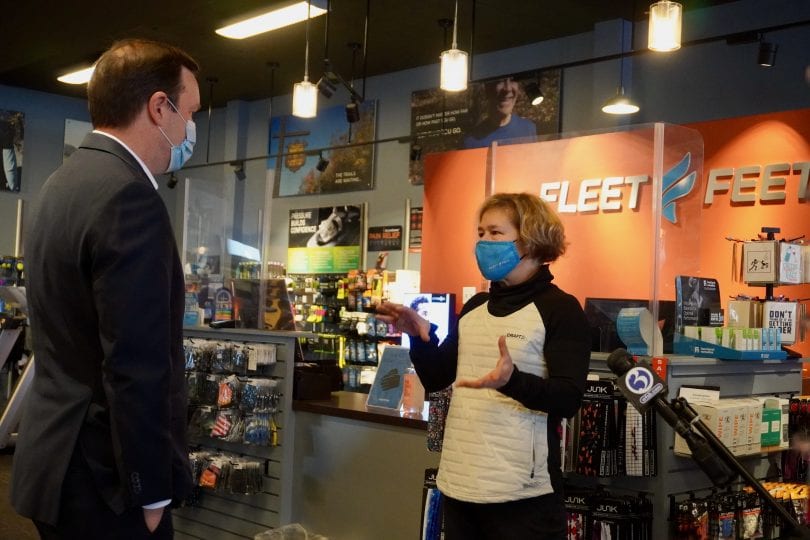 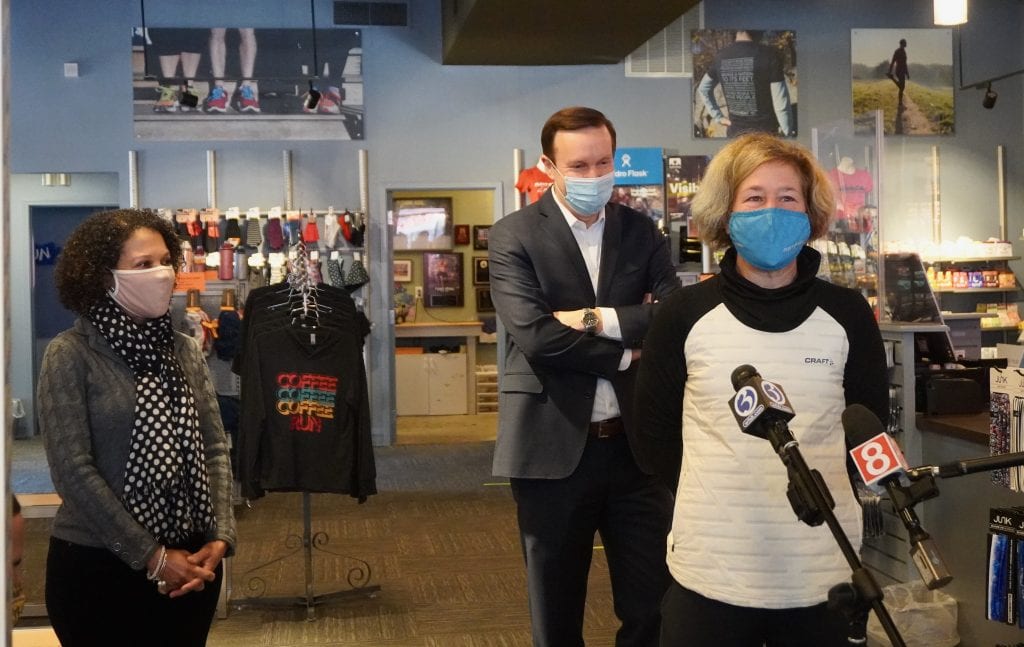 Hard work and creativity have helped Fleet Feet Sports remain viable amid the COVID-19 pandemic, but can only go so far when revenues drop by 30% and even the normally-busy holiday period is a bust.

Stephanie Blozy, who has co-owned West Hartford’s Fleet Feet Sports with her sister, Carrie, since 2008, met with U.S. Sen. Chris Murphy Monday morning at the Farmington Avenue store, and said she hopes to receive assistance through the latest round of Paycheck Protection Program funds, a $284 billion piece of the $900 billion COVID-19 relief package passed by Congress in December.

Blozy shared the challenges that Fleet Feet has faced since March 2020, when the store – deemed a “non-essential business” – was forced to close for 69 days.

“We actually set up chairs and carpets and we fit people for shoes outside on the curb,” Blozy said. With more people at home, there was an increase in the number of people running and walking.

Blozy told Murphy that she made the agonizing decision to furlough most of her staff in early April, other than full-time employees who helped with curbside service and online orders, but she obtained a second-round Paycheck Protection Program (PPP) loan of just under $150,000 that came through in late April and she was able to bring almost everyone back. A few staff members over age 65 decided not to return.

After reopening, business actually increased over the summer, running 10% above the previous year’s sales, said Blozy, but once October hit, and COVID-19 cases started increasing, sales dropped again somewhat dramatically. “The last few weeks we’ve been down 30%,” she said.

They’re getting creative again, increasing curbside pick-up and fitting people to shoes via Zoom. Blozy said she and her sister have continued to work harder than ever, and are committed to being a safe workplace. Every shoe tried on gets disinfected, she said.

The business had benefitted from a running boom in 2008 and in 2011 expanded into the former Harry’s Pizza space next door. That boom culminated in 2015, Blozy said, but in early 2020 things “started out really, really well. We were up nearly 15% in that first quarter.”

With the initial loan, which she hopes has turned into a grant, Fleet Feet will break even this year. “We are very thankful for the PPP,” she said Monday. “It really allowed us to breathe easier.”

But Blozy gasped audibly when Murphy told her that he has worn the same pair of basic Nike running shoes for years when walking across the state over the summer. He said as a runner for decade he has never taken care of his feet, and promised Blozy he would be back for a new pair in the next 30 days.

It’s not just retailers that have been suffering and were desperate for another round of PPP or other aid package. 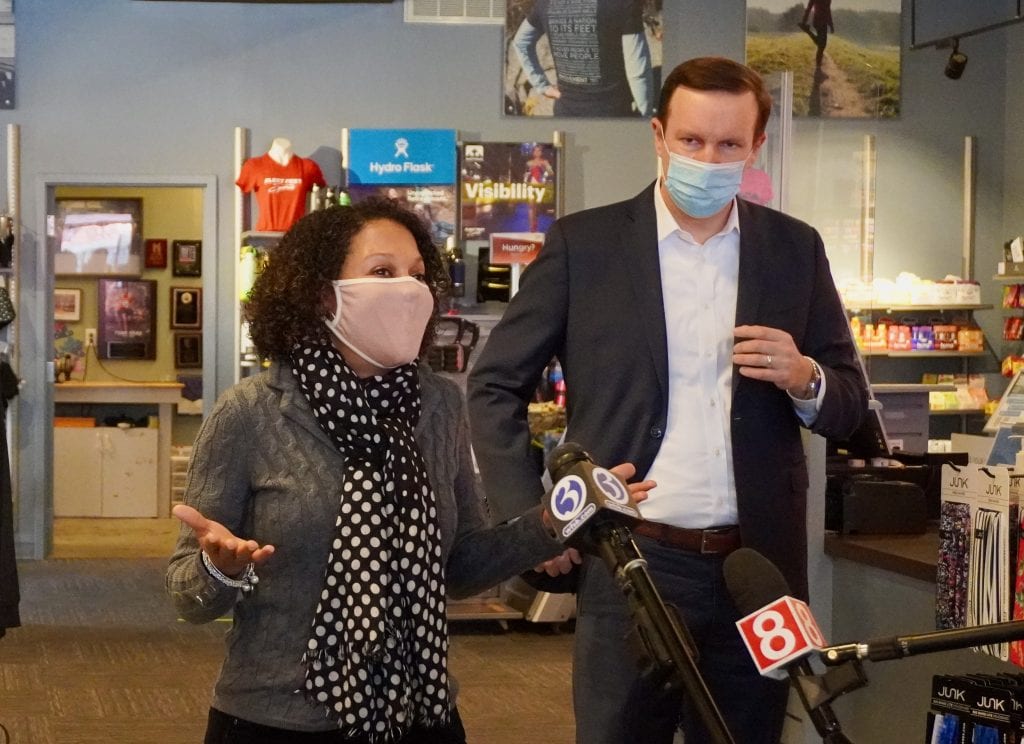 Restaurants are a major part of West Hartford’s economy, and state Rep. Tammy Exum said, and while local restaurants have done relatively well compared to their counterparts elsewhere in the state, they were disappointed when they were shut out of earlier rounds that benefitted larger businesses. “Hopefully [during] this round that is not going to take place,” Exum said.

Wintertime, and being inside, makes things difficult for the restaurant community. “In the meantime having this federal money coming through” will help them hold on. “I do feel that help is on the way.”

West Hartford’s business community is tight-knit, Blozy said, and during the holidays they offered a special where for every $100 spent, customers received a $20 gift certificate to a local restaurant.

In the past 12 years Fleet Feet has become more than just a local retailer, but the store, located at 1003 Farmington Ave., has become a gathering place for an ever-increasing community of runners as well as a supporter of a variety of healthy living initiatives and service projects throughout Greater Hartford.

It’s been hard, Blozy said, because events have been a major part of Fleet Feet’s mission. “I like to say we’re not just a shoe store, I’m a starting line. My favorite thing to do is to bring community members together. … That has been the hardest thing for me during the pandemic is not to be able to offer events,” she said, not to be there in a physical way.

The pause in high schools sports has also hurt the business. 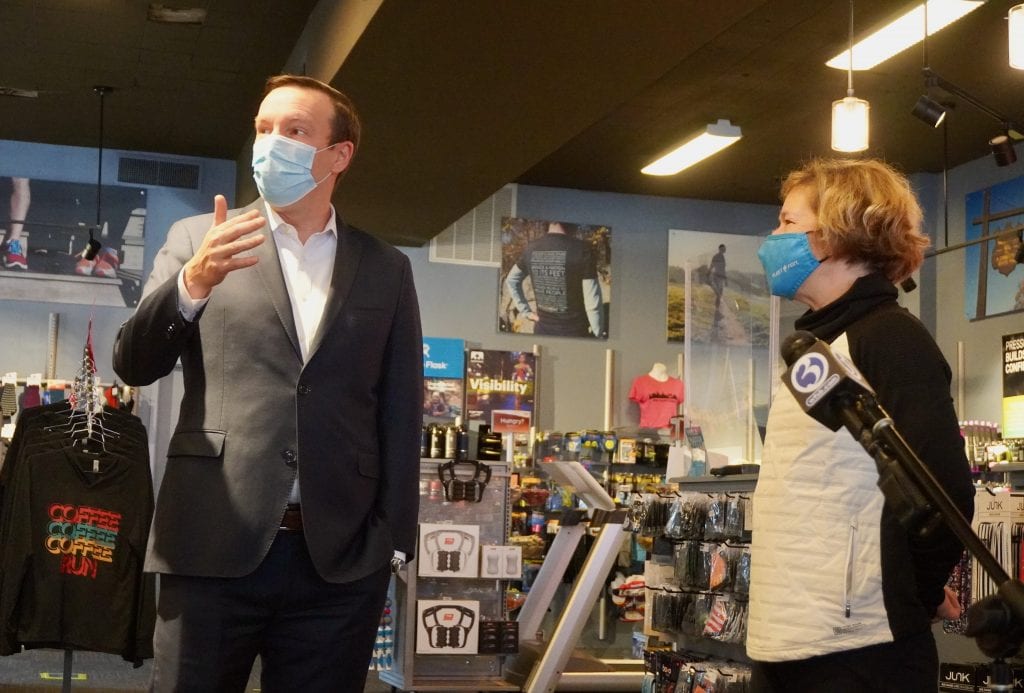 For businesses that got a grant in earlier rounds, to receive another PPP loan they must show a reduction of at least 25% in business in any one quarter and be smaller than had to be in the earlier rounds, employing a maximum of 300 employees. Businesses that did not previously participate in the PPP do not need to meet the same criteria.

“I think the majority will go to businesses like Fleet Feet,” Murphy said.

The latest round of PPP also has a funding stream dedicated to minority-owned financial institution.

PPP serves to not only keep businesses afloat and keep employees on the payroll, and to protect the unemployment compensation system, Murphy said.

Blozy said she will be applying for another PPP loan, and qualifies with a 30% drop in business during one of the quarters of 2020. She expects to be down another 30% in the first quarter of 2021.

“That funding will come in handy to keep staff on payroll even if we can’t give them hours in the store,” she said. “It means just keeping afloat.”

She told Murphy the store would not have closed without the PPP, but that’s because she would have used her own savings to keep it going. 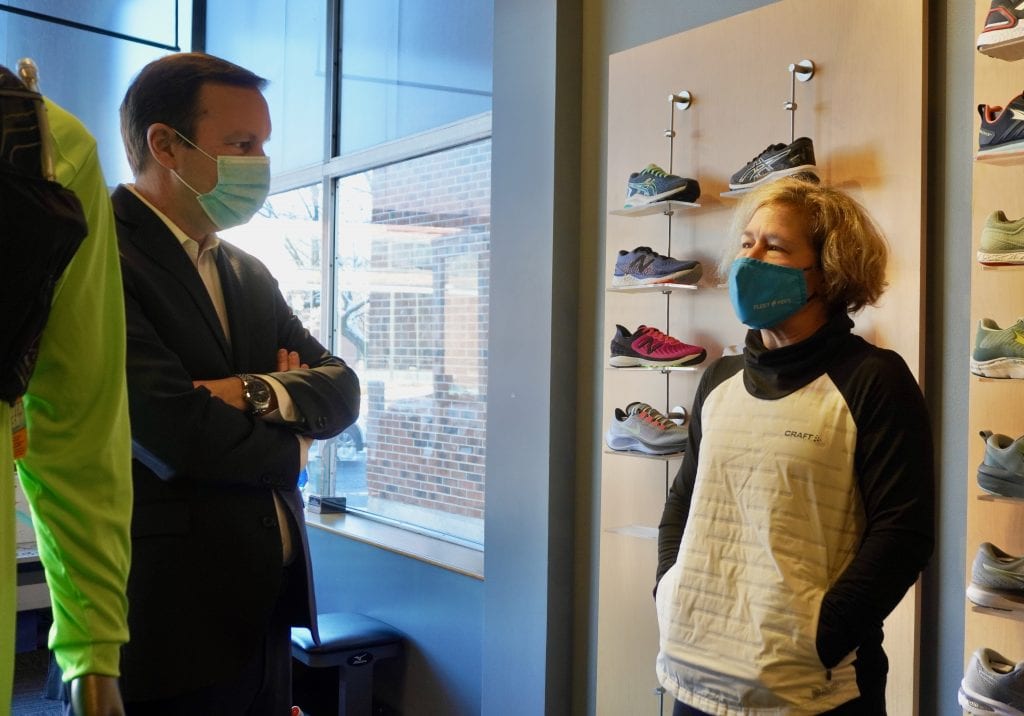