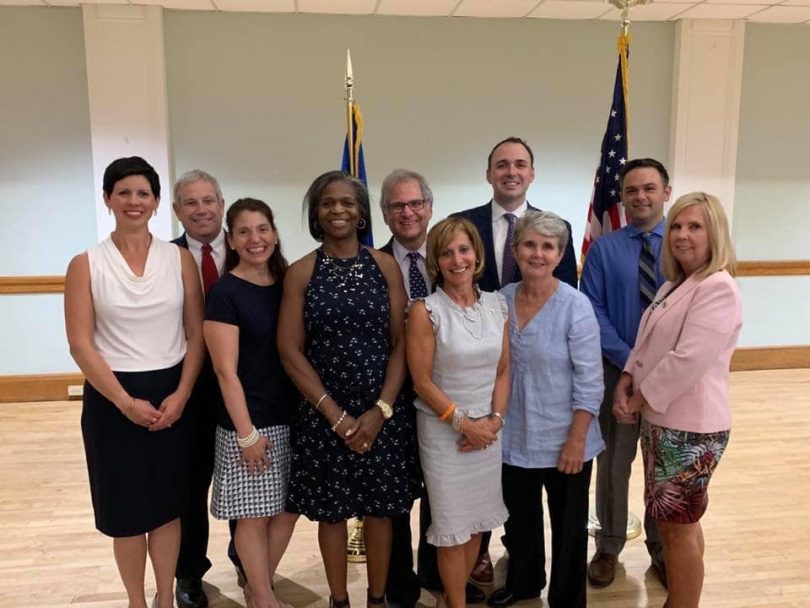 The West Hartford Democratic Town Committee met in the Town Hall auditorium Thursday night, and endorsed a slate of candidates, that the executive committee had recommended in June after a lengthy interview process, for the November 2019 municipal election.

They will be joined by endorsed newcomer Carol Blanks, who is completing a four-year term on the Board of Education, which she has chaired since December.

Democrat Dallas Dodge, who has been a member of the Town Council since May 2016, announced June 10 that he will not seek re-election to the Town Council in order to focus on his family and professional career. Dodge was recently named a partner with Hartford-based lobbying and political consulting firm Roy & Leroy.

Candidates endorsed Thursday night for a four-year term on the Board of Education are Sean Passan and Ari Steinberg, who are looking to succeed current members Blanks – who is running for Town Council instead –  and Dave Pauluk, who decided not to seek re-election.

In addition, Amanda Aronson, who was appointed earlier this month to fill the vacancy left by Cheryl Greenberg, who resigned to go on sabbatical from her job as a professor at Trinity College, was endorsed. Her name will be on a separate line on the ticket Nov. 5 in what also serves as a special election to continue to hold that seat for the remainder of the two-year term.

Essie Labrot, who has served as West Hartford’s town clerk since 2008, was also endorsed for re-election as part of the Democratic slate Thursday night.

Town Council terms are two years, and all nine seats are up for re-election this year. The Democrats currently hold six seats, the maximum allowable for a majority party on the nine-person Council. Three seats are held by Republicans.

The Board of Education has seven members, who serve in staggered four-year terms. Democrats currently hold five of those seats, the maximum allowable for a majority party.

Three seats are up for grabs this November, in addition to the special election for the remaining two years of Greenberg’s seat.

The West Hartford Republican Town Committee is scheduled to meet at West Hartford Town Hall on July 22 to endorse its slate of candidates for the Nov. 5, 2019, municipal election.

Once all endorsements have been made, We-Ha.com will ask all candidates to complete an identical questionnaire and will publish that information as it is received.

According to Labrot, parties are required to hold nominating conventions during the period July 16-23 for the purpose of endorsing candidates, and a certified list of candidates must be sent to her by 4 p.m. on July 24.