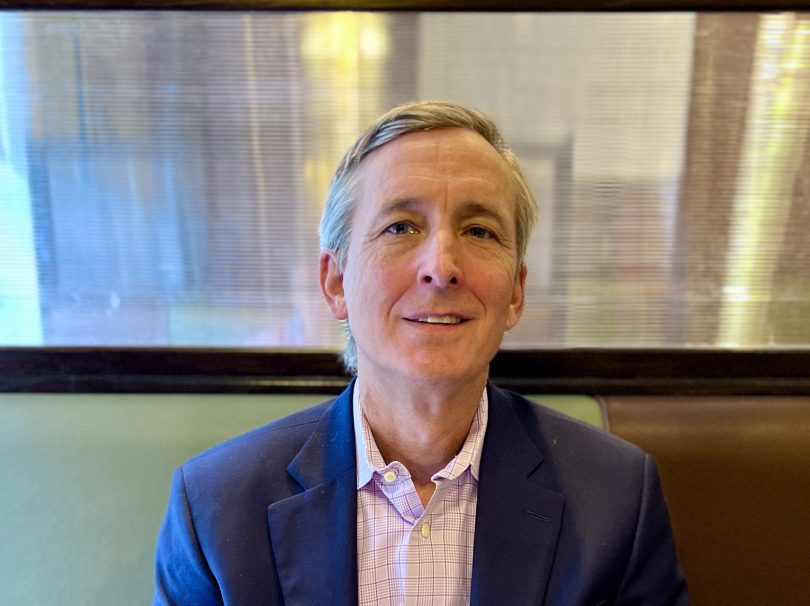 Dr. Larry Lazor, a West Hartford resident and an OB/GYN at Hartford Hospital, acknowledges it’s an uphill battle to win the 1st Congressional District seat held by John Larson, but he’s not deterred.

The first thing that Dr. Larry Lazor makes clear during a recent meeting over breakfast is that he is pro-choice, supports gun control measures such as universal background checks, and believes the 2020 election was fair and legitimate.

Lazor’s views likely dovetail with the views of many people who self-describe themselves as fiscally conservative but socially liberal, or at least moderate. He won the endorsement of state Republicans at their convention in May, but in a state that hasn’t elected a Republican to serve in Congress or the Senate since Chris Shays last won the 4th District in 2006, he believes there is opportunity but acknowledges it’s an uphill battle.

Why has a successful physician decided to get involved in politics?

“There’s this great opportunity for the Republican party change, at least at the Congressional level,” Lazor said.

He’s not going into this blindly, or hurriedly. Unlike many Republican candidates who are nominated at the last minute, Lazor launched his campaign 18 months ago after lengthy discussions with party leadership, including then-chair Sue Hatfield.

In his first push for the nomination, he met with the Republican Town Committees in the 1st District’s 27 towns, presenting who he is, and what his goals are. At the 2022 convention in May, Jim Griffin of Bristol, who lost in a Republican primary against Mary Fay of West Hartford for the 1st District nomination in 2020 and was pursuing the 2022 Republican nomination, gave his support to Lazor, who was then nominated unanimously.

Lazor thinks this is a good time to push back against the Democratic control of the state noting that financially, between 2008 and 2020, the state trailed in most economic indicators.

This is the first time in 24 years that longtime Democratic incumbent John Larson, who narrowly won a primary in 1998, faces any challenge within his own party. While Muad Hrezi, a young progressive Democrat from East Hartford, failed to secure enough signatures within the required timeframe to force a primary, he is challenging the petition process in court.

Hrezi, a former staffer for U.S. Sen. Chris Murphy who works as a teacher and track coach, had raised nearly $500,000 as of the last filing in April. At that time Lazor had raised $127,652, while Larson had raised more than $1.1 million.

Regardless of his status, Hrezi’s support is significant. “Larson will have to defend his vision,” Lazor said.

“I think Republicans can do a better job,” Lazor said, noting that being a Republican means some people will support him just because of that “R” next to his name. And while he admits that he agrees with many of the views of the West Hartford Republicans who broke away from the party last year to form A Connecticut Party, he remains a strong believer in the GOP and the two-party system.

This is a tough time in politics, he acknowledged, but something the nation has to go through. “People have no faith in Congress,” he said. “And Trump was so divisive,” he said, a “blow to democracy.”

The challenge, Lazor said, is getting people to focus on issues and not labels. “It’s how we talk about the issues. We need to bring the emotions down. … You have to do it very eloquently, keep the emotions down.”

Lazor said he’s 60 years old and has a broad range of life experiences. He’s worked in South America, he’s been a physician for a long time, and he is hopeful that people will actually listen to his views.

What Lazor doesn’t have is political experience. He said he’s never had any interest in serving in local government, but is excited about seeing the national political process in action, and about effecting change.

He’s not running because he needs a job or a change in his life. Lazor has been an OB/GYN at Hartford Hospital for 32 years and said he loves his job, his wife, his kids. His wife, Felicia, a former physical therapist, is a trader at Bradley, Foster & Sargent, Inc. and has been very supportive of his decision to become a candidate. Their three children are 22, 20, and 12.

“This is an uphill battle, a very difficult thing to do, but I think there’s an opportunity.” President Joe Biden’s approval rating is low, and he thinks that Larson has become too much a part of the establishment after 24 years and takes a lot of PAC money. Lazor said he thinks 12 years would be a reasonable term limit.

This summer Lazor plans to be out meeting people – in parks, at block parties in Hartford where he may not win, but thinks he can gain more votes than previous candidates.

He plans to share his views about issues that are relevant to people in the district – the economy, inflation, people struggling with rent and utilities.

“Are people optimistic?” he asked. He thinks they need to be.

More information about Lazor can be found at www.lazorforcongress.com.