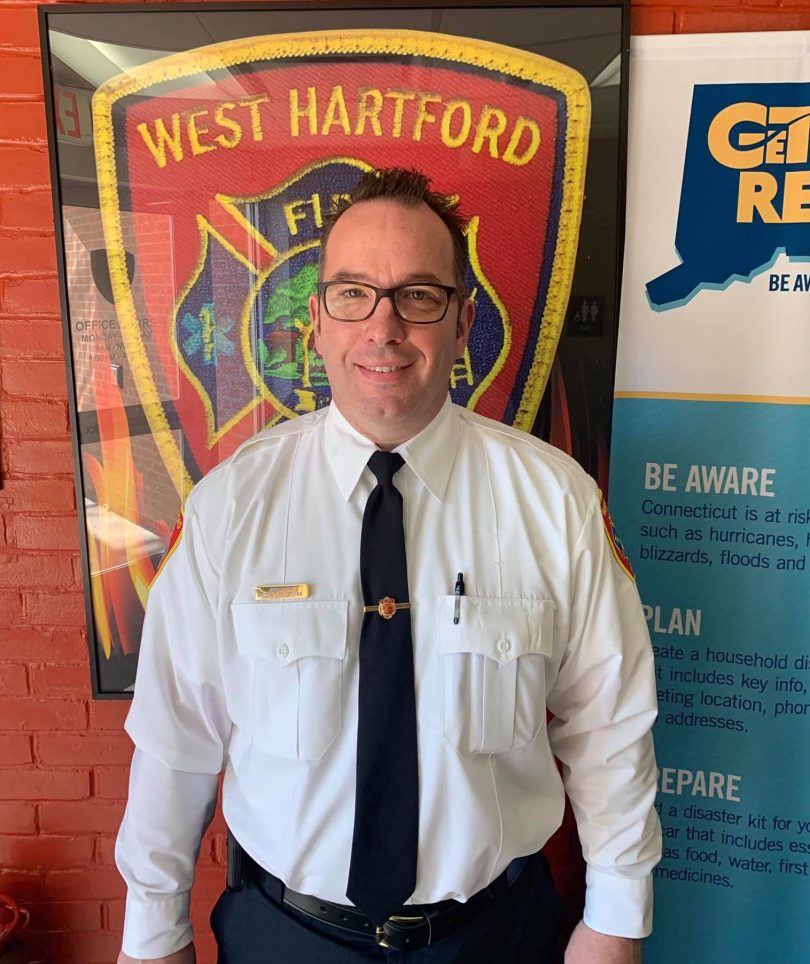 Hugh O’Callaghan has been hired as an assistant chief of the West Hartford Fire Department, and several other promotions have been announced.

West Hartford Fire Chief Greg Priest announced that Hugh O’Callaghan joined the department on Monday as assistant chief – and immediately was faced with one of the busiest weeks the department has had in some time.

Priest said that O’Callaghan, who recently retired as a house captain with the Hamden Fire Department after nearly 20 years, was the clear choice for the position, and will be responsible for operations.

“He came out as a top candidate,” Priest said, and after an internal and external review, that included a psychological review, had the background, education, and credentials that he and the rest of the leadership team were seeking in an assistant chief.

“There was an eagerness, level of experience, education – and an attitude,” Priest said. O’Callaghan’s leadership ability, which will be a great complement to the team, attracted the attention of search committee members from inside and outside the department, he said.

“He’s a great guy, really motivated, and the cornerstone of his career is developing others,” said Priest. O’Callaghan’s interests include mentoring, coaching and personnel development.

“This is an exciting time for West Hartford Fire. The last several months have been incredibly busy with hiring and training new firefighters, finalizing a collective bargaining agreement, and preparing for significant changes to schedules and more efficient deployment of resources,” Priest said.

Priest said that the department’s effectiveness currently and moving forward, will rely on finding leaders who can provide exemplary service while navigating necessary changes, and he is confident that O’Callaghan fills that role.

Priest himself was hired for the position of assistant chief last summer, and was promoted to chief in November 2018.

O’Callaghan has a master’s degree in organizational leadership and is completing his final year of the prestigious National Fire Academy’s Executive Fire Officer program, Priest said. His work on the NFPA 1710 revision for Fire Suppression Operations and Special Operations to the Public will be a valuable asset when the West Hartford Fire Department receives its final report from Fitch on efficiency from Fitch, Priest said.

He was also named Firefighter of the Year in Hamden in both 2015 and 2017 – an honor which speaks volumes about the respect he has gained from his peers and the community.

O’Callaghan’s qualifications served him well immediately, when faced with three fires in a short period of time on his third day of work, and another two fires – one of them major – on the following day.

“There’s no better way to start than to just get right into it, and it’s been a quite a week,” O’Callaghan told We-Ha.com in a phone interview.

He said he was present at four of the five fires – and had been en route to Thursday’s chimney fire on Ellsworth when he was diverted to the major fire on Brightwood Lane. He said he has immediately been impressed with the response.

Crises notwithstanding, O’Callaghan said that his first priority will be to build relationships with people, with the other department members and really get to know the men and women he will be working with.

“That’s one of my core things, and what I did in Hamden. A good team, working all in sync, is pretty much unstoppable,” O’Callaghan said. At the end of the day, he said he’s responsible not just for the community, but also the welfare of the 21 firefighters on duty at any one time.

O’Callaghan lives in Glastonbury with his wife and two daughters, ages 13 and 10. He grew up in Hartford, near the West Hartford line, and said that he grew up swimming and riding his bike at Kennedy Pool.

Prior to joining the Hamden Fire Department, O’Callaghan worked for the Norwich Fire Department. He was previously a police officer in Hartford, but resigned that position amid a charge of falsifying a police report in 1997. He does not have a criminal record.

Priest said that he was aware of the 1997 incident, fully and carefully vetted the facts, and believes that “leaders make mistakes and use it as an opportunity to grow.” He has moved past it and built an exemplary career, Priest said.

Battalion Chief Keith Byrne was promoted in January to a new temporary position responsible for oversight of the Division of Training and Support Services, specifically supervising the department’s 32 ALS paramedics.

A licensed paramedic since 1996 who also has experience in hazardous materials response and training, Byrne has a degree in fire science administration from the University of New Haven and has been member of the West Hartford Fire Department since 1995. Byrne was promoted to apparatus operator in 2002, lieutenant in 2008, and captain in 2012.

Byrne has received two life saving awards, three certificates and commendations, and two unit citation awards. He is also a deputy fire marshal in the Town of Norfolk, where he lives with his fiancé, Janet. He has three daughters, two sons, one grandson, and one granddaughter.

Scott Fredsbo was recently promoted to the rank of lieutenant. He has been a firefighter since 1991 and an EMT since 1995, and joined the West Hartford Fire Department in 1998.

Fredsbo was promoted to apparatus operator in 2005, and received a letter of commendation for his actions at the Avon mountain dump truck crash.

John Bigham has also been promoted to the rank of lieutenant.

Bigham began his career in 1989 with the Waterbury Fire Department, and founded the Rescue Company where he spent 20 of his 23 years, receiving numerous citations. He is also a fire services instructor.

Bigham joined the West Hartford Fire Department in 2012, and was promoted to apparatus operator in 2015. He lives in in Terryville with his longtime girlfriend and their dog.

Craig Larsen, a firefighter and EMT since 2005, has been promoted to apparatus operator. He previously worked as an emergency department technician at Connecticut Children’s Medical Center, was hired by the Arlington (VA) Fire Department in 2010, and became a medic in 2013.

Jason Powers has also been promoted to apparatus operator. A native of Phoenix, AZ, he is a third-generation firefighter who grew up shadowing his uncles and grandfather at the fire station.

Powers gained experience as a firefighter and paramedic during his 10-year stint in the U.S. Navy, and when he was honorably discharged in 2012 was hired a s a firefighter/EMT with the Mohegan Tribal Fire Department. He subsequently worked at the Submarine Base Fire Department in Groton, and as a paramedic in Bridgeport.

Powers was also a member of West Hartford’s first class of firefighter/paramedics and lives in Middletown with his wife and their two young daughters.

Also promoted to apparatus operator is Taylor Salva, who also joined the West Hartford Fire Department as a firefighter/paramedic in 2015. He lives in Groton with is wife, two daughters, and step-daughter.

“We are proud and lucky to have these members in their new positions,” Priest said. “I wish them well and am committed to being part of their individual and our collective success.”

A pinning ceremony will be held in May to honor all new hires and promotions since last October.