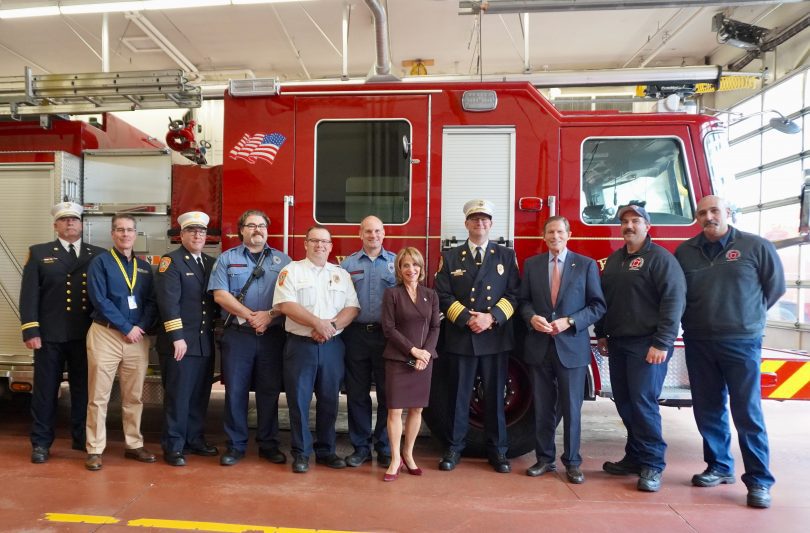 The West Hartford Fire Department was awarded a grant in the amount of more than $350,000 for fire officer training. 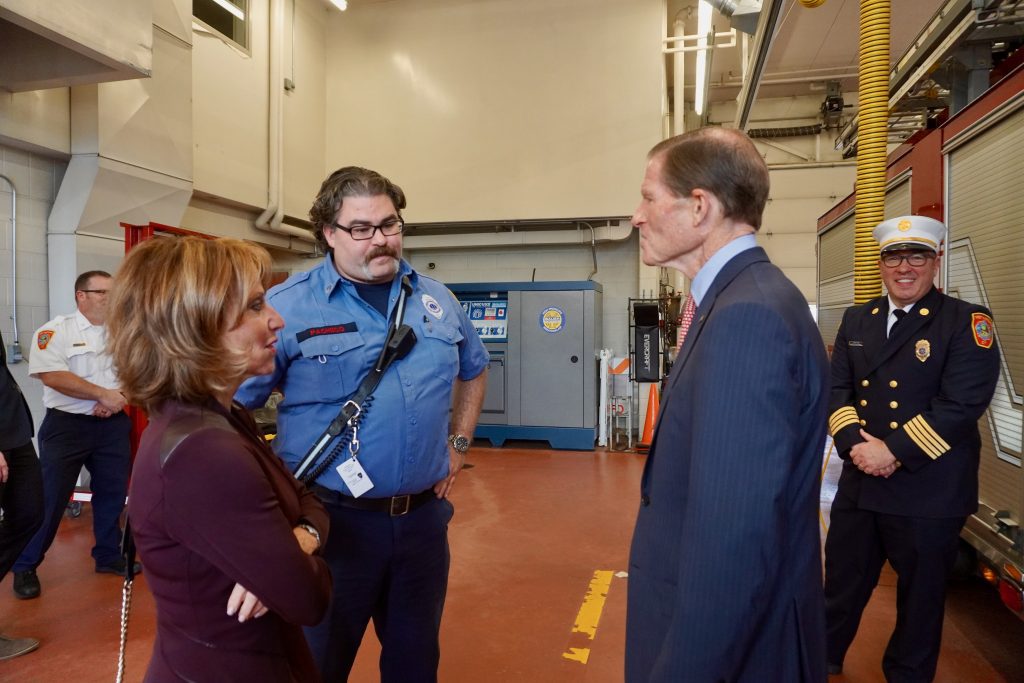 Capt. Adam Pacheco, second from left, speaks with U.S. Sen. Richard Blumenthal at Station 2 on Friday afternoon about a federal grant that the department has received for training. At left is Mayor Shari Cantor, and at right is Assistant Chief Hugh O’Callaghan. Photo credit: Ronni Newton

U.S. Sen. Richard Blumenthal, Mayor Shari Cantor, and Town Manager Matt Hart formally announced the awarding of a large grant to the West Hartford Fire Department Friday, funds that will allow the department to accelerate its training of fire officers who will then be able use their skills to educate future leaders at the department level.

The grant, which totals $350,353.64, was awarded through the Department of Homeland Security’s Fiscal Year 2020 Assistance to Firefighters Grant program (AFG)

West Hartford Fire Chief Greg Priest said the grant is very much appreciated and will be used to help train officers in a robust way, more quickly and effectively.

“The men and women in the department are very well trained in the basics, and this will only add to the safety and the ability for them to supervise personnel,” Priest said.

During the COVID-19 pandemic, when more people were home, there was an increase in the number of residential fires, Priest said, crediting the rest of the department for continuing to do an excellent job in their response to incidents.

“We’re really blessed in Connecticut because we have good people,” Blumenthal said. “And training really makes a difference.”

Blumenthal credited Cantor for helping get the grant. “Your mayor was arguing very persuasively for this grant,” he said.

“We specifically asked for a training grant,” said Assistant Chief Hugh O’Callaghan. During COVID the department wasn’t really able to do much training.

Capt. Adam Pacheco, who wrote the grant application, noted that the demographics of the department’s workforce have changed over the past few years, since they took over the paramedic operations. “Unfortunately because of COVID, a number of the schools had shut down and our ability to gather and develop our new personnel was hampered,” he said, impacting the ability to further train the paramedics on the firefighting side of the job to further their careers and prepare them for leadership roles. “We need to make sure they’re prepared to do so.”

The training needs Pacheco identified, and that the grant will provide funding for, include certifying personnel as instructors and officers as well as attending an incident safety officer class “so they could assure the safety of the personnel under them.”

The funds will pay for the education, as well as the hours that need to be back-filled in West Hartford while personnel are being trained. Training takes 130 hours, Pacheco said, and will be held at the State Fire Academy in Windsor Locks.

There will be 20 new instructors, O’Callaghan said, and they will then be able to use their skills to pay it forward. “Those new instructors will be able to come back to the fire house and train our people for many, many years.”

“Financially it helps us to execute where we so need it,” Priest said. 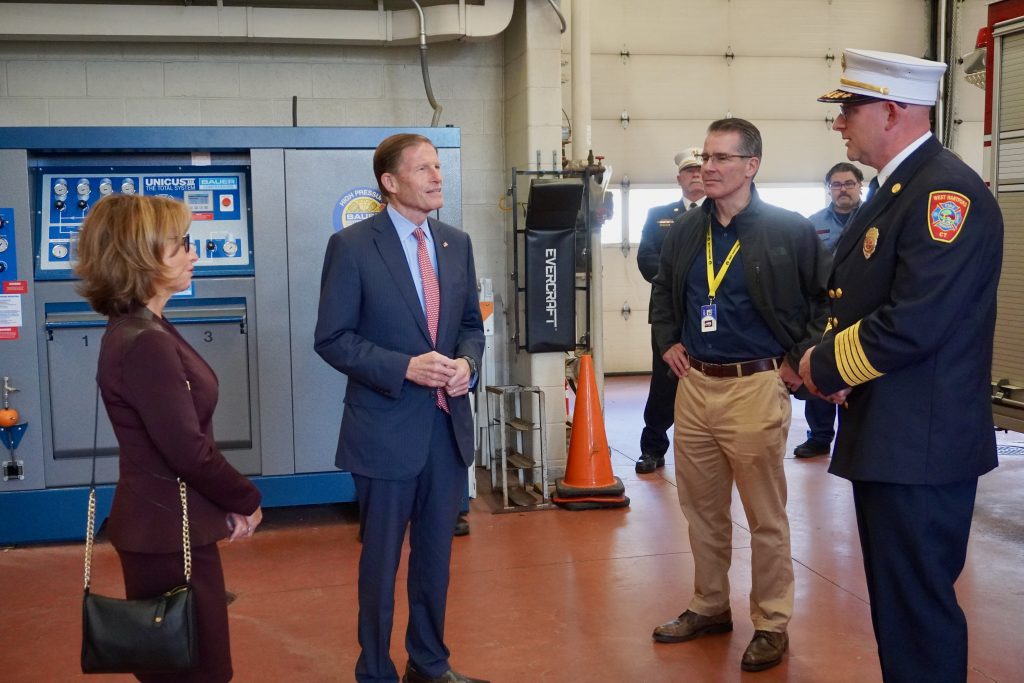 The West Hartford Fire Department has been innovative and forward thinking, Cantor said. Early in the pandemic, she said, “We were the only, we think … [department] testing in house” thanks to a partnership put into place with Farmington-based Jackson Labs for PCR testing of employees and family members who had possibly been exposed to COVID-19. It helped keep workers and their families safe and ensure peace of mind.

“We saw this need coming and we addressed it proactively,” Priest said, using staff to do the in-house testing and bringing the specimens to Jackson Labs where the results were received in an average time of about 12 hours. “The net impact is that we are able to clear people more quickly to return to duty rather than going into quarantine or isolation.”

While the need for testing has tapered off, Priest said, the program remains in place. The West Hartford Fire Department currently has a vaccination rate of 90%, he told We-Ha.com.

The department has also been innovative in its partnership with the West Hartford-Bloomfield Health District in the establishment of a homebound vaccination program for the at-risk community shortly after vaccines were approved. “It was something that was thought of as a need in the community. It was something untraditionally for folks to be doing that but we paired with the West Hartford-Bloomfield Health District to send out a paramedic with a nurse … to give some shots to people who weren’t able to come in,” Priest said.

“What else do you need,” Blumenthal asked the chief. He said one of the most important things he does is help get grants for equipment and training.

“I believe we’re getting what the most important thing is we need, which is that we have people listening, we have people addressing our most critical needs but we have the support of our elected officials, our staff, we have very good support of labor and management here so we have very good communication and conversation,” Priest said. Going forward the department will look at lessons learned from the pandemic to make sure there are the right number of resources for emergency response and planning.

“This grant is needed, and we’re very much appreciative of it,” Priest added. The department received a grant several years ago for new air packs, he said, and he said he was grateful for that as well.

Hart said the department could benefit from funding for infrastructure, since many of the stations are old and the space is tight. “It’s been a few years since we’ve had anything significant,” Hart said.