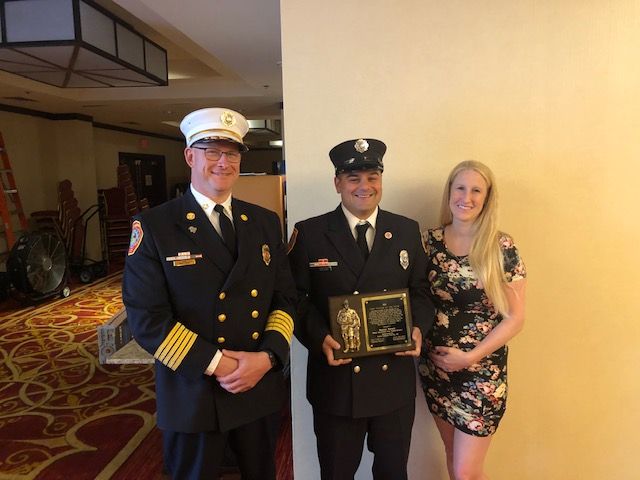 West Hartford Apparatus Operator Steeve Parent has been named the American Legion 2021 Firefighter of the Year for Connecticut. 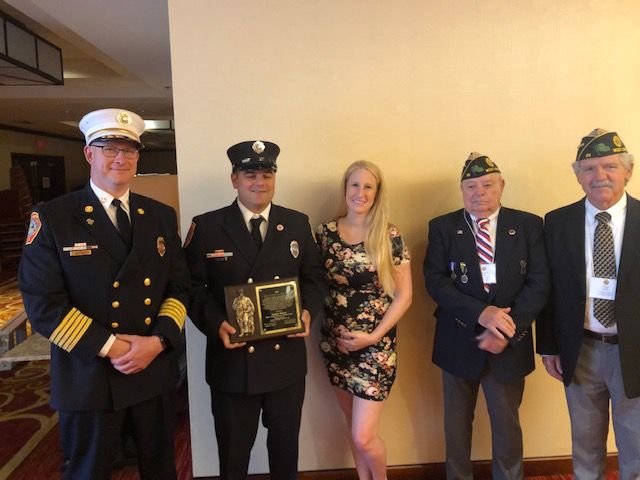 For the second year in a row, the American Legion’s Connecticut Firefighter of the Year is a member of the West Hartford Fire Department.

At a ceremony on July 10 at the American Legion State Convention in Trumbull, Steeve Parent, an apparatus operator who was honored as Amiercan Legion Hayes-Velhage Post 96’s 2020 Firefighter of the Year in February, was recognized with this year’s statewide honor.

Just last month, American Legion Post 96 presented the 2020 Connecticut Firefighter of the Year award to West Hartford firefighter/paramedic Rocco Laudato, in a ceremony that had been delayed due to the COVID-19 pandemic.

The plaque presented to Parent earlier this month states that the Connecticut Firefighter of the Year is “Awarded annually to that member of any Volunteer, ON Call of Paid Certified Fire Fighter who while in the pursuit of their profession and by exceptional performance of duty has brought credit to their Fire Department, The Community and to themselves during the current year and by conduction themselves in this manner has earned the highest respect of The American Legion, Department of Connecticut.” 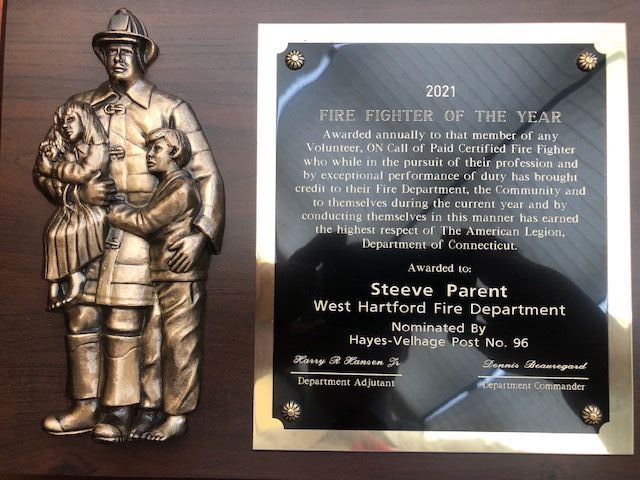 Although the recognition that Parent received in February was delayed by the pandemic, it was actions Parent took without delay that were credited for saving a man’s life and led to his being honored on a statewide level.

“But a sentinel act alone is not enough to have this honor conferred,” Battalion Chief Jarrad Smith said at the Feb. 10, 2021 award ceremony. “Nominees must also have a track record of embodying the core values that firefighters look for in their peers – dedication, pride, professionalism, and above all else, the courage to place oneself in harm’s way for a member of the public.”

What Parent did in April 2019 demonstrated courage, leadership, and selflessness,” Smith said in February, as he recounted the story of Parent’s actions when he came across a pick-up truck that had just overturned and was in flames at the side of the road, on I-395 just north of the intersection with the Massachusetts Turnpike.

“Steeve was off-duty, without protective equipment, traveling with his [now] wife on vacation when he witnessed a major motor vehicle accident and subsequently rescued a man from a burning vehicle that had crashed off the Massachusetts Turnpike,” Smith said. The man’s face had turned blue.

“The man was unconscious and was not breathing when Steeve arrived at the overturned car. He quickly realized the man was only moments from cardiac arrest and subsequent death. Through quick and selfless action, Steeve removed the man from the passenger compartment of the vehicle before it was consumed by fire,” said Smith.

“Displaying great impromptu leadership, Steeve rallied a small group of bystanders to assist in caring for the man’s medical needs until emergency services arrived. When Steeve handed the victim off to responders several minutes later, the previously unconscious man who had not been breathing had his eyes open and was looking around at the chaos.”

Since then, Parent, who joined the West Hartford Fire Department in 2015 as one of the first to hold the dual designation of firefighter/paramedic and has been a field training officer training new firefighter/paramedics, has been promoted to the job of apparatus operator, which Smith said is “one of the most technically demanding positions responsible for the safe and effective operation of the department’s fleet of firefighting apparatus.”

Parent is also an active member and serves on the executive board of Local 1241.

“We have a lot of outstanding firefighters,” Chief Greg Priest said at the February recognition event, but what separated Parent in this case was how he took action when there was no expectation.

“When faced with great personal risk and given the opportunity to save another one’s life, with no protective equipment, he moved into action,” Priest said. “Steeve was faced with a situation where he could have chosen not to act, to not be a firefighter and to stay safely away as a private citizen. It would have been easy … but we know this wasn’t the case.”

Parent “showed his true colors,” Priest said. “Steeve, I’m impressed, I’m very impressed. … You certainly faced a once-in-a-lifetime situation and your individual character was proven. You demonstrated bravery and a willingness to face great personal danger to save others. … Without question, your selfless actions saved another person’s life.”

Post 96 Commander Patrick Harrell said in February that Parent’s achievement would be submitted for the statewide honor, which was conferred this month.