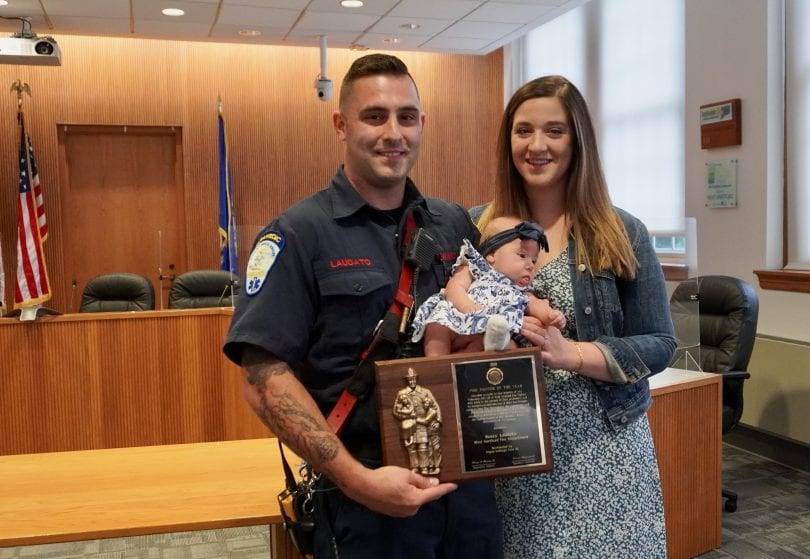 Rocco Laudato and his wife, Alyssa, with their 3-month-old daughter at the CT Firefighter of the Year recognition ceremony. June 22, 2021. Photo credit: Ronni Newton

Firefighter/paramedic Rocco Laudato was honored Tuesday as the American Legion’s Connecticut Firefighter of the Year for 2020. 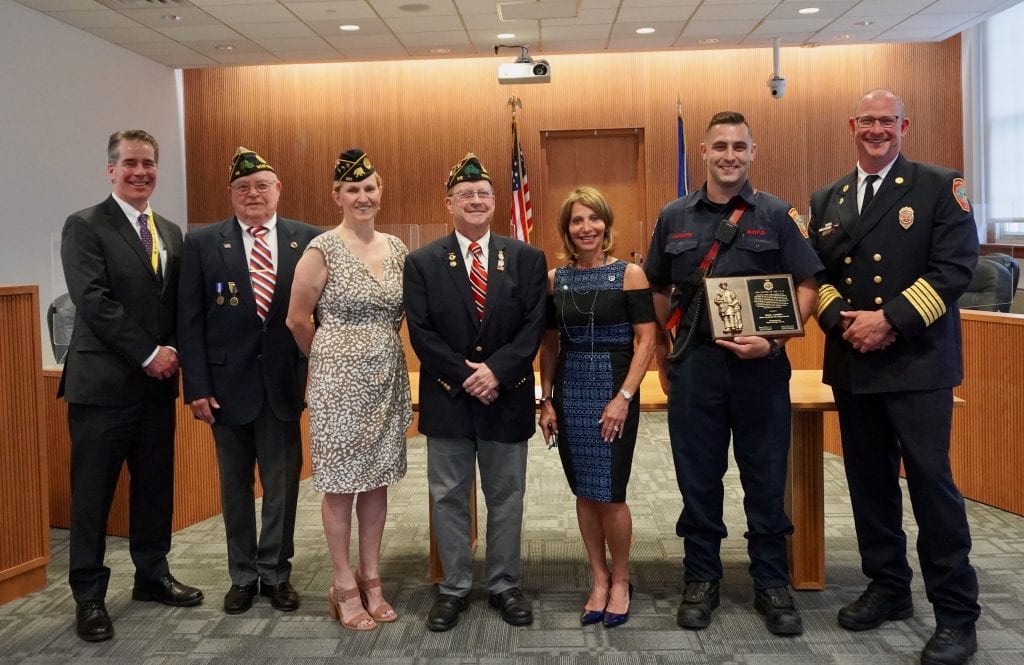 Firefighter/parademic Rocco Laudato, who joined the West Hartford Fire Department in 2015, has quickly distinguished himself for going above and beyond in performing his duties, and after earning American Legion Hayes-Velhage Post 96 and Exchange Club Firefighter of the Year honors in 2019, has also earned the American Legion’s statewide honor.

The Connecticut Firefighter of the Year award was actually for 2020, but due to the COVID-19 pandemic the presentation was delayed – which allowed his 3-month-old daughter to be part of the ceremony. Chief Greg Priest, Assistant Chief Hugh O’Callaghan, Mayor Shari Cantor, Town Manager Matt Hart, Post 96 leadership, and members of the West Hartford Fire Department also attended Tuesday’s event. 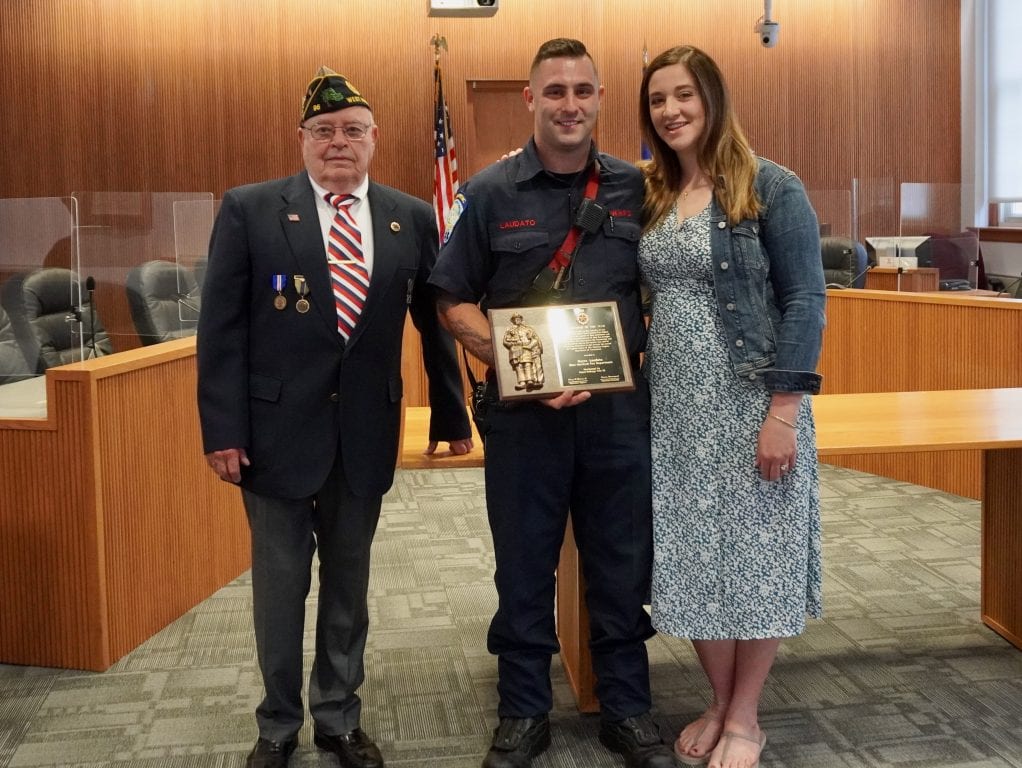 When Laudato received the 2019 award from Post 96, it was in recognition of “a very public and very tragic incident,” said Battalion Chief Jarrad Smith, who served as emcee of Tuesday’s event.

“The challenge with recognizing our members for their actions is that they inevitably come on the heels of significant human tragedy, particularly in a community like this,” said Smith. “We’re primarily judged on our ability to lessen the impact because to call something truly successful in our terms is almost impossible.” 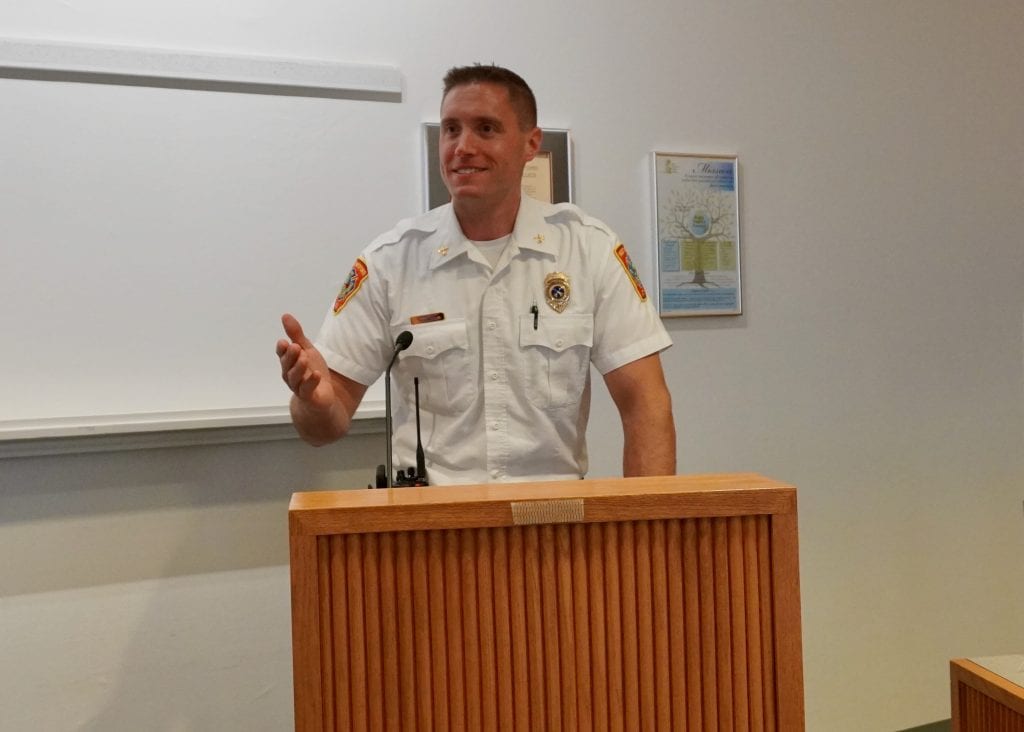 On one particular day, Laudato certainly showed what it means to be a West Hartford firefighter, Smith said, and he has continued to do so. In the past year he has treated 355 medical patients, 37 of which were critical. Five were fatalities, Smith said.

Past Post Commander Jeff Cole said after presenting Laudato with the Post 96 award in 2019, they forwarded his nomination to the state department of American Legion. Laudato is just the second West Hartford firefighter to be honored with the statewide award.

Cole noted that he has personally had great experience being treated by West Hartford firefighter/paramedics.

Vice Commander Jeff Linden presented a plaque to Laudato, noting that he has earned “the highest respect of the American Legion, Department of Connecticut.”

“Obviously this is kind of bittersweet getting this because … it was a pretty tragic event that happened,” Laudato said, expressing his appreciation for receiving the honor. 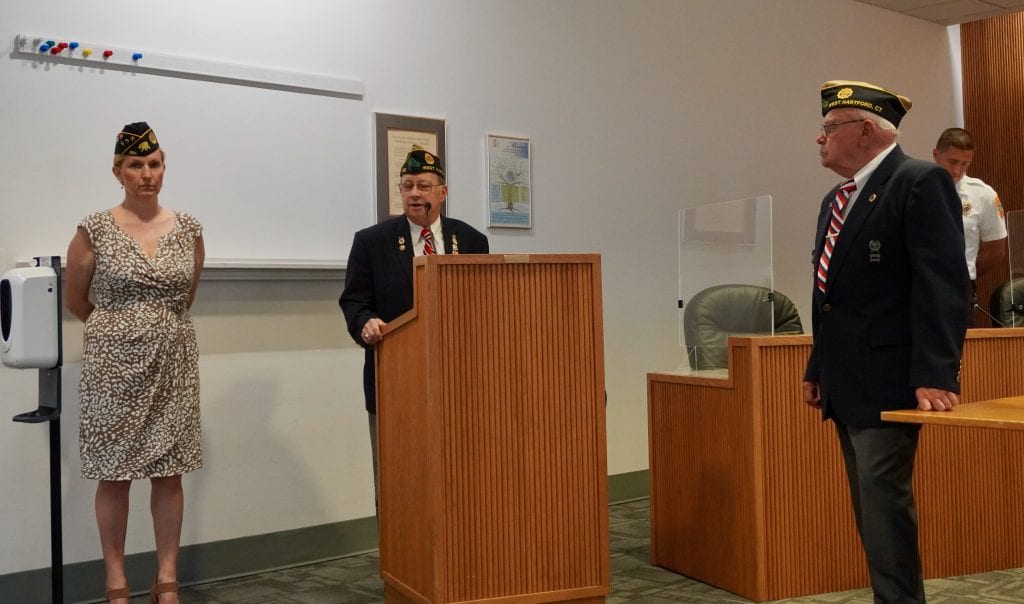 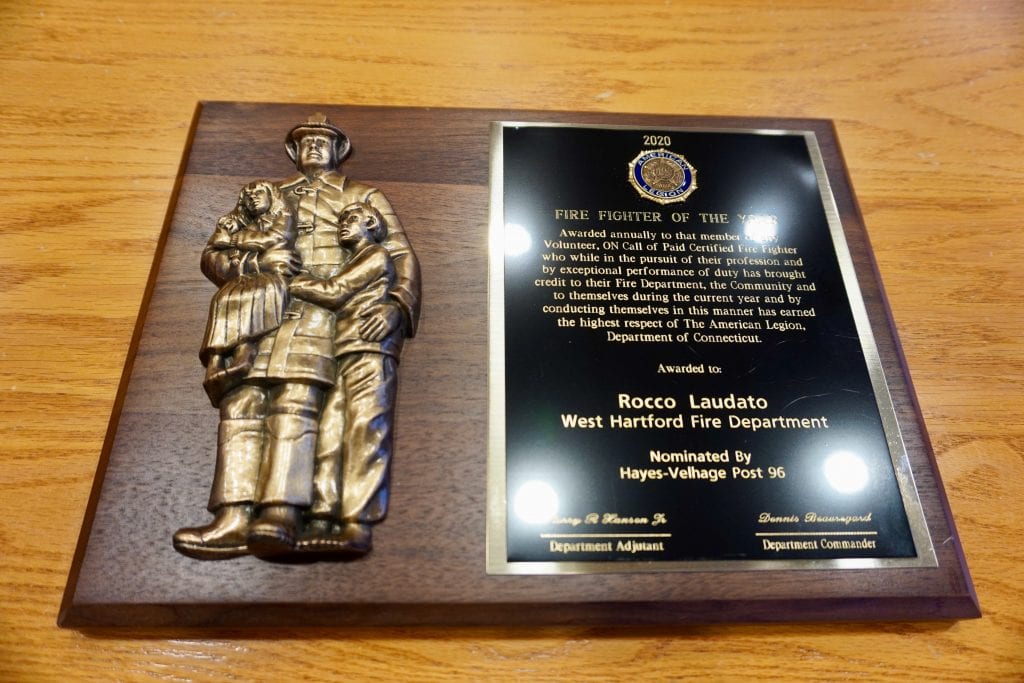 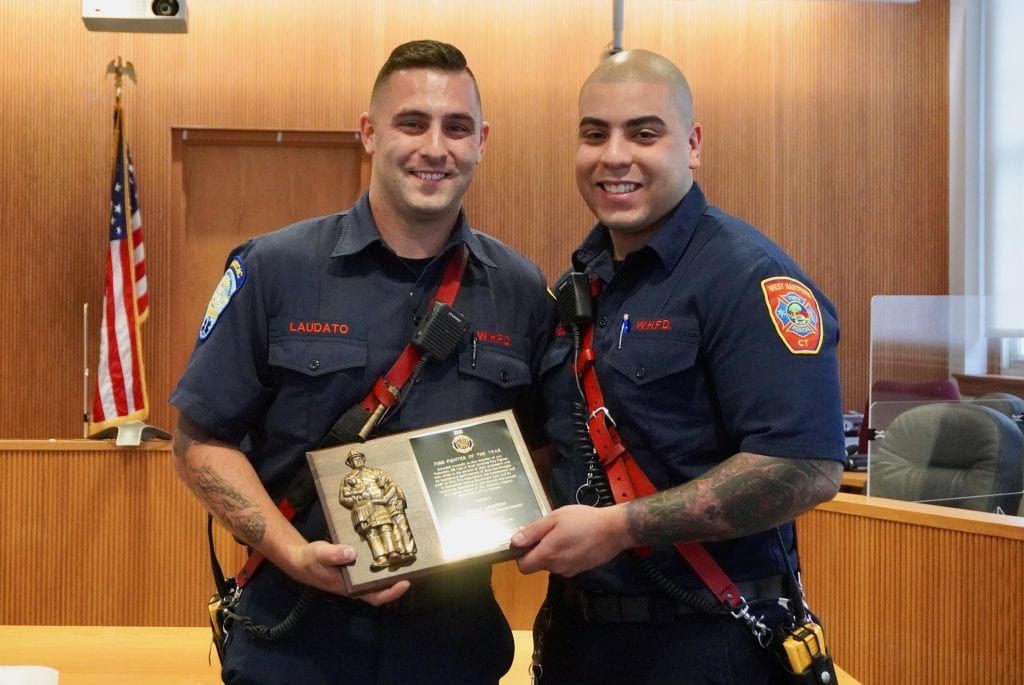 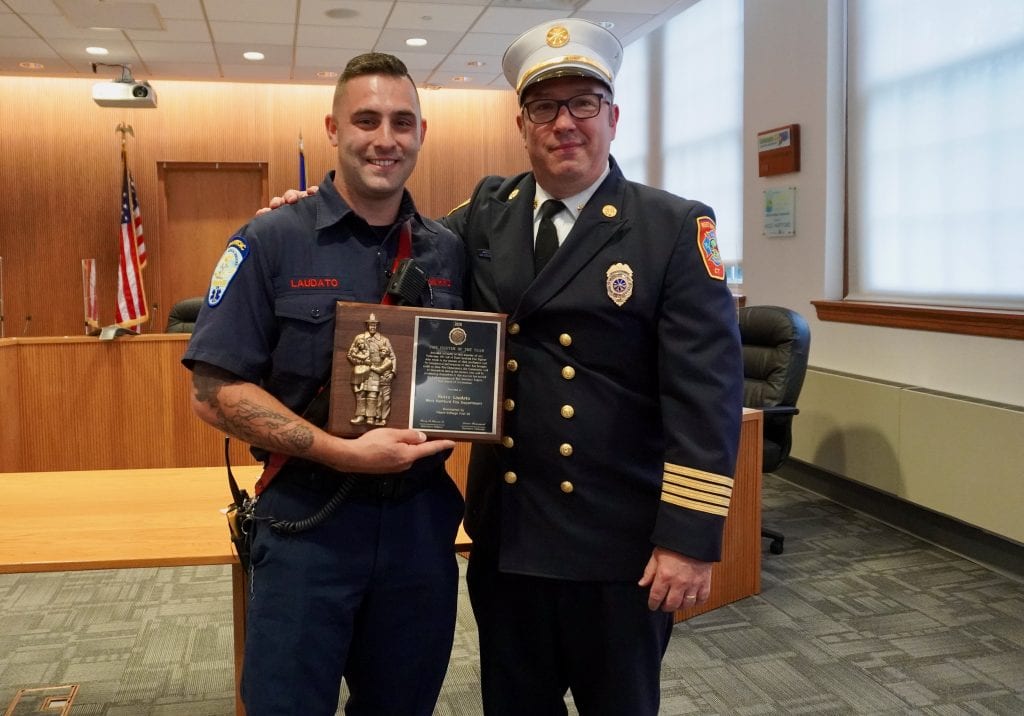 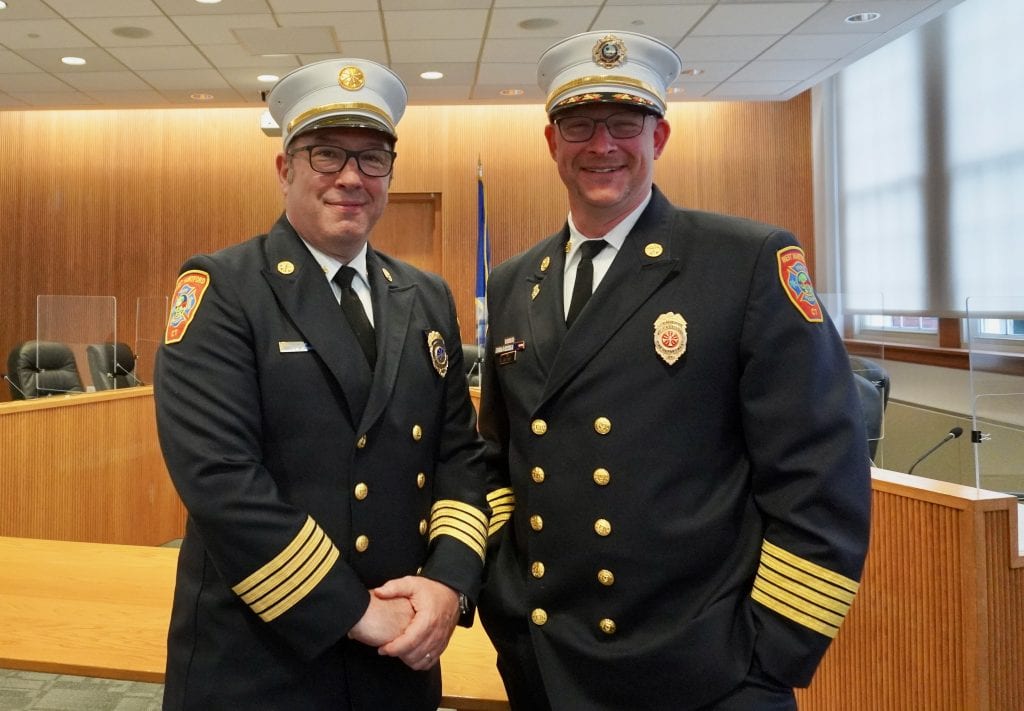