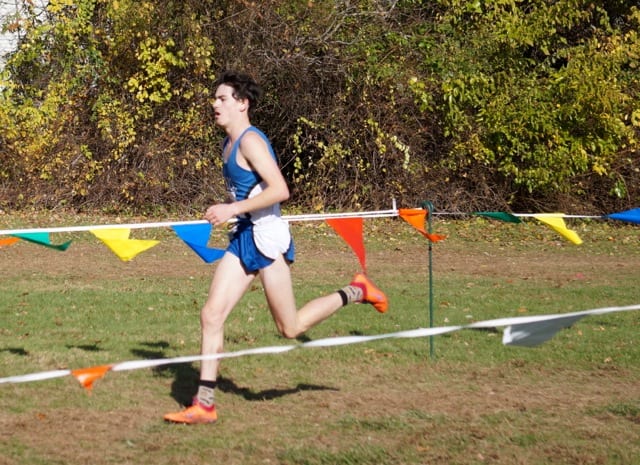 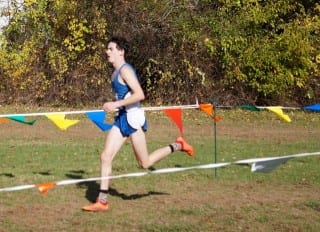 Congratulations to Hall’s Ari Klau, who finished second overall in the New England Cross Country Championships at Wickham Park in Manchester on Saturday, Nov. 8, 2014! He ran a time of 15:39, seven seconds ahead of the third place finisher and just a few seconds slower than his time of 15:34 in the State Open at Wickham the previous week.

“I did the first two miles in 10 minutes flat. That’s the best I’ve ever done,” Klau said. Although it was a “reach” goal and he felt like he was close after two miles, Klau didn’t think he would be able to catch winner Alex Ostberg of Darien High School, who finished in first place Saturday in 15:07. Ostberg had also won the State Open the previous week, in a record-setting time of 14:58. 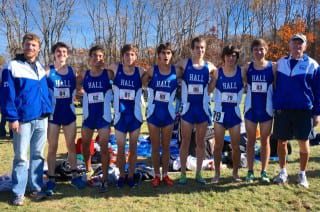 “It was really cold a little muddy today,” Klau said. Last year he finished in fifth place, and was happy to have improved. Klau has spent most of this cross country season training with teammate Grant O’Connor, who finished 10 in the New Englands in 16:09 and helped propel the Hall team to an overall sixth place finish. “He’s the greatest partner I could ask for,” Klau said. Both Klau and O’Connor made the All New England team and will compete in one of two national cross country events later this month.

On Thursday, Klau will sign a National Letter of Intent to run at the University of Virginia.

“The kids all ran well, and they were passing people,” said Hall head coach Tom Butterfield, who will retire after coaching for 53 years. “I’m so pleased. They have done everything and more,” said Butterfield, who decided to postpone retirement for four more years just to remain with the team’s current group of seniors.

“When they were freshman I knew they had potential,” Butterfield said. “New Englands is big time,” he said of the group that he considers his “best overall” team. 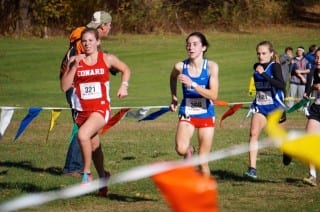 Conard sophomore Gwen Geisler was the lone girl representing West Hartford in the New England Cross Country Championships, but she was thrilled that a large entourage of friends and teammates came along to cheer her on. “The goal was to make it here and she did,” said head coach Leslie Hadra. “She’s made every one of her goals this season,” Hadra said. This was Geisler’s first season running cross country; she played field hockey last fall.

Geisler finished in 57th place in a time of 19:55. She was 16th at the State Open on the same course the previous week in 19:26. “I felt really good. I was just having a good time in my last race of the season,” Geisler said.

Conard finished sixth and Hall finished seventh (out of 20) in the Class L championships on Nov. 12. Click here for individual event results. The State Open for diving will be held on Nov. 13 in Middletown, and the State Open for swimming is Nov. 15 at Yale. 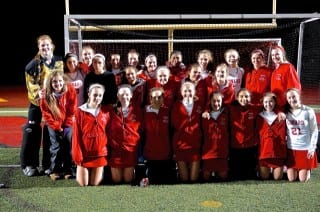 The 2014 Conard field hockey team made it to the quarterfinals of Class L. Photo credit: Ronni Newton

The Conard field hockey team made it to the quarterfinals of the Class L championships, but lost to Cheshire 2-0 at home on Nov. 7. Coach Cathy Callahan thanked her team for a fabulous season. She is optimistic about the Chieftains’ chances for success in 2015 because only three starters will graduate.

If you are interested in supporting West Hartford’s high school sports programs, consider attending (or donating to) the War-Chiefs Sports Council Tailgate on Nov. 15 in the Town Hall Auditorium. Click here for details!

Scores for all sports are listed below. If you have details and/or photos from future contests, please forward them to Ronni Newton at [email protected].