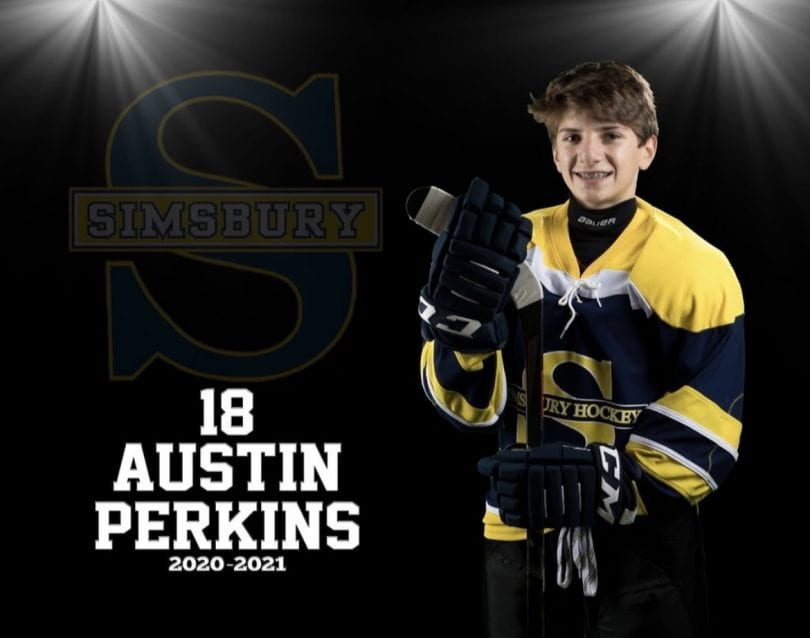 Austin Perkins, a West Hartford resident who plays for the Simsbury Youth Hockey Bantam A team, will have a chance to play in the USA Hockey National Championship.

There is nothing more breathtaking in sports than overtime in a championship game when skill, fatigue ,and luck fuse together to decide the winner.

For hockey fans, leading up to that moment, they are banded together as they hold their collective breaths each time the puck enters their team’s defensive zone, unable to exhale until it’s cleared out. The game can end at any time, on any play – from a dazzling signature move to a delicate unfortunate bounce of the puck – and as fast as the game is, that clinching goal is often scored in slow-motion for those waiting for their next shift and watching from the bench.

For 13-year-old West Hartford resident Austin Perkins, a seventh grader at Kingswood Oxford, watching his teammate [Max Berger] score the deciding goal in the Connecticut Hockey Conference (CHC) Tier II State Championship was a moment that seemingly played out in super slow-mo as it was his first state championship win in seven years of travel hockey. 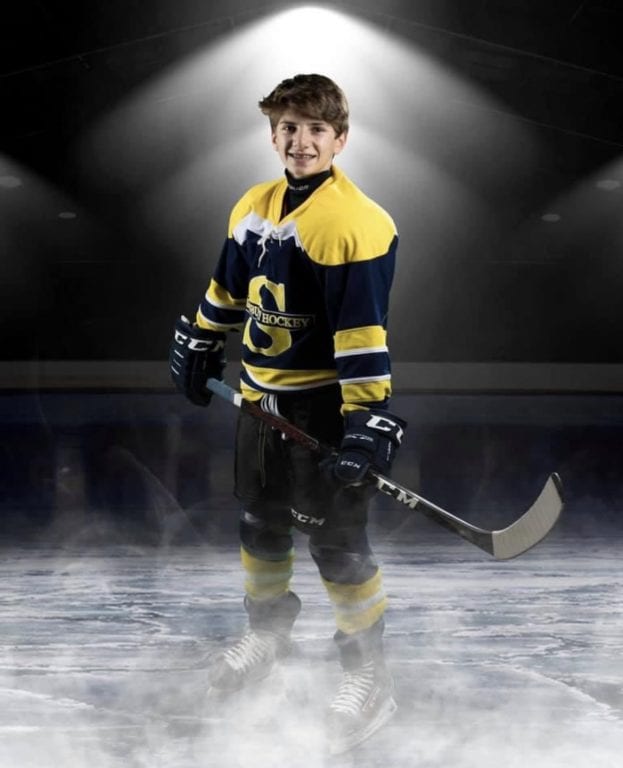 “Compared to most of my teammates, who have won two, three, and four championships, you could say it took me a little while,” said Perkins, who plays for the Simsbury Youth Hockey Bantam A (U14) team.

On a Sunday afternoon in March, the forces that collided in Northford, CT, left Perkins and his teammates tossing their sticks, glove,s and masks into the air after scoring 3:22 into overtime to beat No. 1 seed New Canaan 4-3 to win the Tier II State championship, earning a trip to Texas to play in the USA Hockey National Championship April 29 – May 3.

“This moment is pretty surreal. All season, we would have occasional chatters about Nationals and getting to play in Dallas. We knew we had the horsepower to get to this point, and I think we always knew we could do it.”

Believing your team can do it and actually getting the opportunity to do it, were two very different things this season – a season left in doubt after the organization shut down all play from mid-November to Jan. 19 because of the COVID-19 pandemic.

“This hockey season has been pretty crazy for everyone,” added Perkins. “We came out of the gate strong and fierce, and then the shutdown happened. But once we got back in late January, we were an even hungrier team, and we got the job done. This team was just a group of guys doing what we love day in and day out. All the hours we put in, the hours we spent waiting and wondering if we were even going to be able to finish our season, and it all paid off.”

Perkins, who started his hockey career in the West Hartford Youth Hockey program participating in “Learn to Play Hockey” and “mini-mites,” is in his second year with the Simsbury organization. He spent his first few years of travel hockey playing for the New England Jr. Falcons (based in Enfield, CT) of the Eastern Hockey Federation, a preeminent youth hockey league in the northeast that consistently has teams ranked in the top five nationally, before returning to West Hartford as a peewee (U12).

“I have realized that playing on an “elite” team at a young age doesn’t really mean you are playing on an “elite” team. There is no question there were some very good teams and great kids playing this sport on those teams, and many are still really good, but I’ll tell you what, there are some unbelievably good hockey players on my Simsbury team who could easily play on any of those elite teams. For my age group, I’m good with where I’m at. Especially since we only travel short distances around Connecticut, instead of driving all over New England with my other teams. I have more time with my family on the weekends now.”

The decision to leave the West Hartford program two years ago was rooted in Simsbury’s tradition of holding tryouts in the fall, opposed to the spring when most youth hockey programs assemble its teams for the following season. The custom of starting its hockey season later is born of a philosophy that the Simsbury organization encourages its players to play a fall sport.

“That was a huge selling point,” says Perkins’ father, Austin Perkins, Sr. “The commitment is not as lengthy, which is ideal for young athletes who love and want to play other sports. Playing in Simsbury makes that possible for Austin.”

Also made possible, a trip to Texas in a couple of weeks to play on the national stage against the best youth hockey teams in the country.

“I knew this team was going to be good,” said Perkins, Sr. “There are some extremely talented kids on this team who set the winning tone from the first moment they took the ice together last October. Austin, as a first year Bantam, is pretty humbled by this group of players and coaches. As a father, you wish for your child to have fun and be successful, but a parent can only dream of a moment like this. It’s a once-in-a-lifetime opportunity.”

“I’m so proud of him,” added Austin’s mother, Lindsay Perkins, the Upper School administrative coordinator at Kingswood Oxford, and a bit of a local “celebrity” chef (follow her on Facebook and Instagram: Lindsay Culinary). “It’s a full circle moment. When I think of those first skating lessons at Veterans Rink when he was just 3 years old, wearing all the heavy pads, he couldn’t even stand up on the ice without assistance from the instructor. He fell down so many times, but he always got back up and tried again. He never wanted to quit.”

For every youth athlete, though, there comes a time when they are compelled to retire from a sport they love. For Austin, he recently made the decision to give up baseball, which he has played the last five years, for hitting another ball. 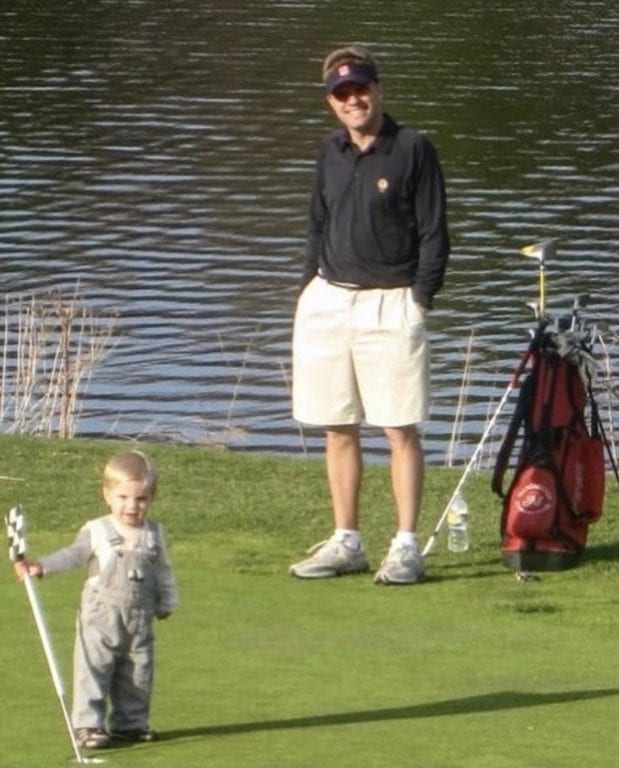 “I really want to focus on golf this year,” said Perkins. “My dad started playing with me when I was 3 years old, and we have played together a lot over the years. It might be my best sport.”

As for Perkins (whose best score is 74) aiming his attention on a sport that the late great Hall of Fame Baseball legend Hank Aaron once compared like this: “It took me seventeen years to get three thousand hits in baseball. It took one afternoon on the golf course.”

“My goal is to break 70 this year. In competition. Who knows, golf is hard.”

So is getting the chance to play on the national stage.

“I love my teammates. I still can’t believe we went undefeated to beat everyone and we are going to nationals,” added Perkins. “We are going to play to win the whole thing. I have no idea what we are facing, but I know who we are. I believe we can win.”

His mom, Lindsay, embraces her son’s confidence. “He practices hockey in our driveway every single night. To see Austin’s hard work and effort culminate in this special opportunity, as a sports parent, there is nothing greater we can ask for.”

Perkins and his Simsbury Bantam A team will play in the USA Hockey National Championship April 29-May 3 in McKinney, Texas. The team has set up a GoFundMe https://www.gofundme.com/f/Simsbury-BantamA–Hockey-Road-to-Nationals to help offset the expense for the traveling families, which includes hotels, flights, transportation, and meals for the team and their families for six days.