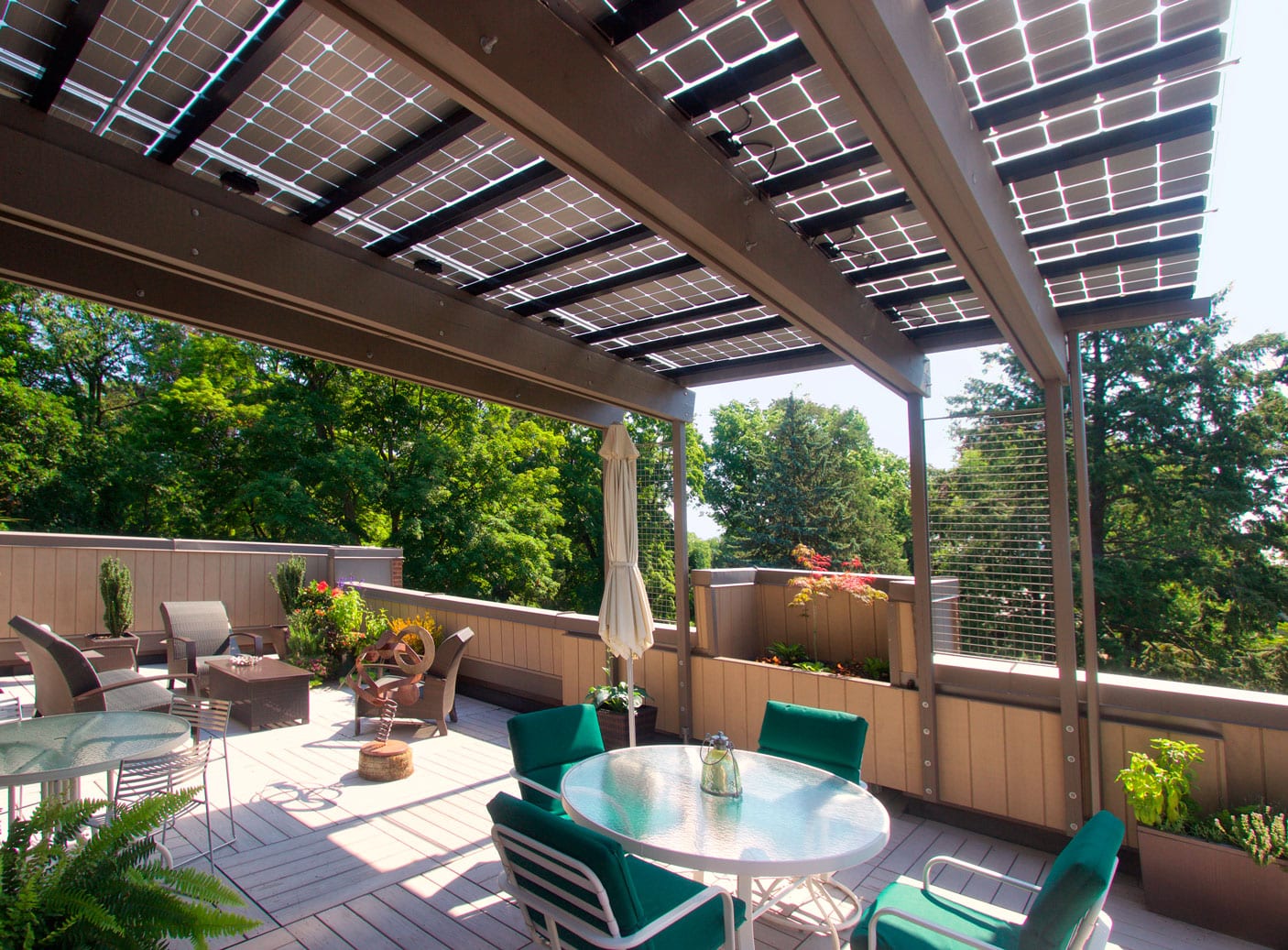 The penthouse of a West Hartford condominium belonging to Elizabeth Normen and Paul Eddy has an innovative solar canopy that provides protection from the elements as well as energy. Courtesy photo

A solar canopy provides protection from the elements as well as supplying a majority of the West Hartford condominium’s energy needs. 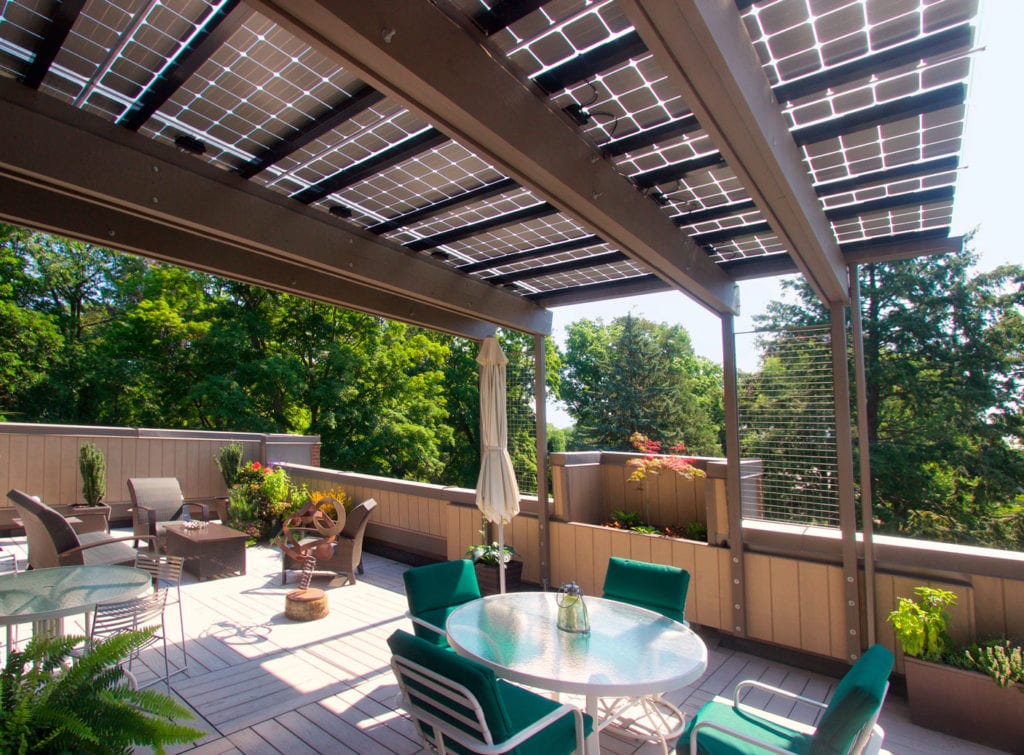 The penthouse of a West Hartford condominium belonging to Elizabeth Normen and Paul Eddy has an innovative solar canopy that provides protection from the elements as well as energy. Courtesy photo

Innovative solar canopies just added onto the patios of a newly energy-efficient West Hartford penthouse are redefining the meaning of “Living Better Electrically.”

That motto came into vogue along with the “all electric home” and condominiums in the early ’70s, when the Grosvenor House “condo” apartment buildings, including a 2,000-square-foot penthouse owned by Elizabeth Normen and her husband, Paul Eddy, were built on Prospect Avenue.

“Following their move from a nearby single family home, they were determined that their all-electric 1973 penthouse would use dramatically less energy,” said Jamie Wolf of Avon-based Wolfworks, the designer and builder hired by the homeowners. “When we remodeled their unit we cut their energy load in half, and that set the stage for the magic formula of producing nearly as much energy as they use. The solar canopy system we’ve now installed provides 87 percent of all the energy the home needs.”

“Through a relationship Aegis has with the town of West Hartford, we received financial incentives,” Normen said.

The solar canopies, known in the construction industry as building integrated photovoltaics (PVs), were installed on both the east and west patios. They were designed in the style of a pergola with translucent glass solar panels for a roof.

The architectural additions not only produce energy; they also provide welcome shade and shelter. The patios were hot before, especially on the west side outside the master bedroom, was but now, they have become outdoor “rooms” with welcome shade.

“The joke was that we could never sit on our patios in the summer because they were so hot from the sun,” Normen said. “When you’re up this high – we’re on the fourth floor – there are no backyard trees for shade. Now we are harvesting the sun, we have shade, and beautiful outdoor spaces. We’re able to live out there all the time now.”

They’ve yet to know how the solar canopies will help with their winter bills, she said, but believe the energy produced from the panels will cover most if not all of their electric charges.

“Right now, solar is paying for our air conditioning and the electric car my husband just got,” Normen said. “Previously we considered going with natural gas but we like solar because the sun is dependable and doesn’t generate anything negative to the environment.”

Because their building’s main rooftop is owned by the condo association, the solar energy system had to be installed on a structure that could be run to the owner’s electric meter to take advantage of the incentives and tax rebates that make solar energy financially attractive, Wolf said. This was the driver and inspiration for these structures, which also include a wire mesh grid for climbing vines.

“We’re thankful that our association was forward-thinking in becoming more energy-efficient,” Normen said. “They were great to work with.”

So was Wolfworks, with whom they worked before, she said.

“Jamie Wolf was sensitive to the condominium building and its features when designing the pergolas,” she said. “He brings design sensibility to his projects.”

Inspired by the Normens’ example, another penthouse owner has hired Wolfworks to design and construct a similar solar canopy for their unit.

For more information, contact Jamie Wolf by calling 860-676-9328 or emailing [email protected]. You may also view a video that showcases the solar canopy at https://www.youtube.com/watch?v=B4aCs9Pp0Vs.