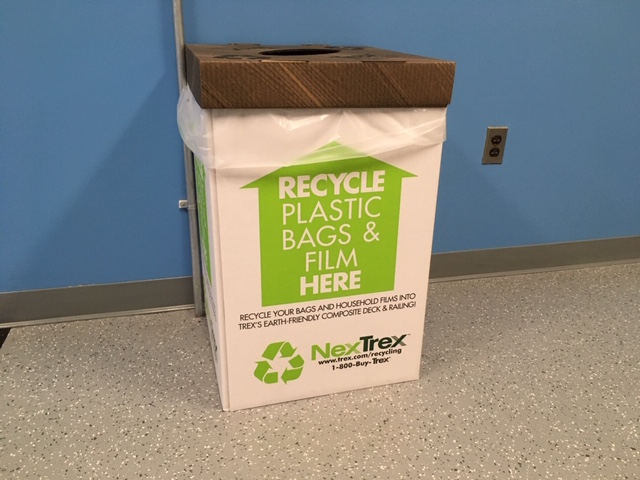 Bins for the collection of plastic bags and film plastic have been installed in several West Hartford locations, including this one at the Elmwood Senior Center. Courtesy of Diane Mack

A plastic film recycling campaign was launched in West Hartford on Feb. 1, 2020.

The West Hartford Land Trust and the West Hartford Rotary Club have launched a plastic film recycling program that will not only divert material from the waste stream, but may also yield a donated bench through the Trex Challenge. 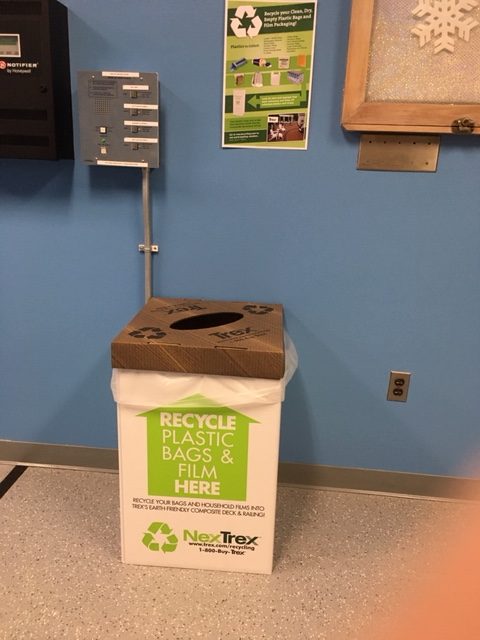 Bins for the collection of plastic bags and film plastic have been installed in several West Hartford locations, including this one at the Elmwood Senior Center. Courtesy of Diane Mack

The partnership between the Land Trust and Rotary wasn’t planned, but the two nonprofits are enjoying a great collaboration for a common goal.

“We both went to the town separately and expressed an interest in the Trex Challenge,” said Diane Mack of the West Hartford Land Trust. The Department of Public Works was “100% behind it,” she said, and the organizations decided to pool their efforts.

Trex, a Winchester, VA-based company known mostly for creating composite decking material, works with schools as well as community groups to collect unwanted plastics material that the company then uses in its products. According to Trex, their decking products contain 95% recycled material.

Through the Trex Challenge, the company has committed to donating a “high-performance composite bench” to a school or community group if 500 pounds of plastic is collected within a six-month span of time.

According to Trex’s website, that translates to about 40,500 plastic bags.

“I heard about this because the Town of Haddam did it a year ago,” Mack said. In less than six months they collected enough to reach the goal, and she’s confident West Hartford can do the same.

Andy Lerner of the West Hartford Rotary Club said the impetus was initially the need to replace some of the aging benches that the organization had donated to the town in the 1950s and 1960s. He contacted Trex directly because he heard about their community initiatives.

“When I found out what was required, it really drove my interest,” Lerner said. He believes the community will be able to collect at least 500 pounds, and it will also encourage people to dispose of their plastic responsibly.

“I’m confident the community will help earn the donated bench by Trex,” said Phillips. “More importantly film plastic recycling is just another example of how we need to think differently about the waste material we generate and to learn how to properly discard unwanted materials.” 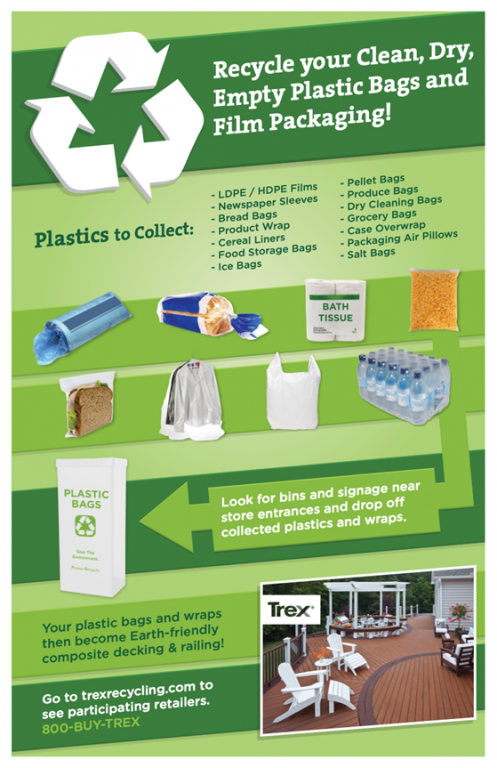 Mack said the Land Trust and Rotary started planning in the fall, and decided to launch the campaign after the holidays. It officially started on Feb. 1, and new bins are now in place at four locations throughout West Hartford, where plastic materials that are not eligible for single-stream recycling – such as produce and bread bags, ice bags, newspaper sleeves, dry cleaning bags, bubble wrap, and case wrap – will be collected through July 31.

The bins are located at:

All materials must be clean and dry, and free of food residue. Plastic that is shiny or makes a “crinkly or crunchy sound” is not acceptable. Chip bags, animal food bags, pre-washed salad bags, and anything that is metallic looking inside are also ineligible.

The plastic from each of the four bins will be weighed, and then combined with material also collected at Stop & Shop and Whole Foods to be brought to the processing facility, Mack said. The weight of the bags in the four Land Trust/Rotary bins will be reported monthly to Trex, and only bags dropped in those receptacles will count toward the bench.

Once one bench is earned, the campaign can be re-launched to earn additional benches.

The location of what will hopefully be the first earned bench has not yet been decided, but it will be in a public place. Mack said the Land Trust would like to consider placing a bench at the trailhead of property it owns on Still Road, and Lerner said Rotary would plan to replace an existing bench that is in disrepair.

“For the Land Trust, this is more about the environment than getting a bench,” Mack said. “It’s about keeping plastics out of the waste stream.”

Both organizations are behind the effort even if the challenge is not met. “Either way, it’s a great opportunity to give back to the community,” Lerner said.

Film plastic is recyclable, just not in our blue carts, Phillips said. “If this campaign achieves the bench and helps to educate all of us on proper waste material management it’s a win-win, and Public Works is excited to support this initiative,” Phillips said.

Although there are fewer plastic bags in circulation since the legislature’s move to tax and then ban single-use bags, there are other plastics that are not subject to the legislation and don’t belong in the waste stream. Some of the schools in town, as well as some of the grocery stores, already collect film plastic, but this will give the community additional locations to drop off the material, plus the goal of a bench.