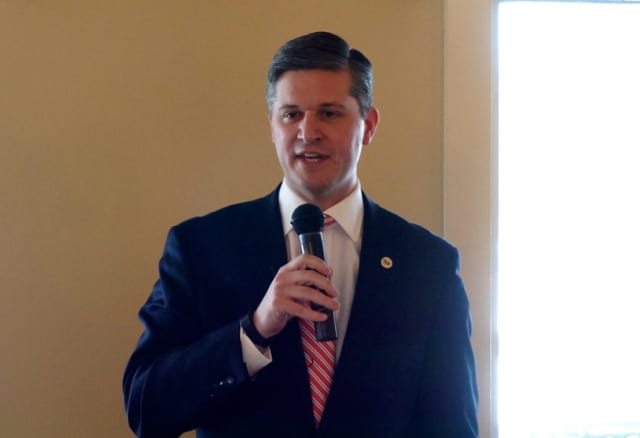 Slifka told the audience at his annual ‘State of the Town’ address that West Hartford had a record-breaking year for development in 2014, and the town’s strong position must be sustained. 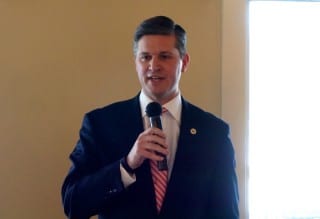 West Hartford Mayor Scott Slifka took the podium at the annual Chamber of Commerce’s “State of the Town” luncheon at Wampanoag Country Club Thursday, and told the capacity crowd that, “The state of West Hartford is very strong, and I’m sure it’s not a suprise that I said that.”

Slifka joked that just like the Al Pacino character in the movie “City Hall” who feels responsible when a sparrow dies in the park, he obsesses about anything that’s “wrong” in town. However, there was not much he could highlight that he feels needs to change about West Hartford.

“We’ve almost become boring because we’re so steady,” Slifka said, likening West Hartford to the Pittsburgh Steelers, a team that consistently wins but is not necessarily sexy about it. “We just had a storm, and we handled it quite well, but no one put us on CNN or MSNBC …” he said. Those that made the news, said Slifka, were doing what we’ve been doing forever.

Slifka said that last year was the “Year of Development,” and the next year will be the “Year of Sustainability.”

In assessing the state of the town, Slifka said he asked, and then answered, the following five questions in order:

Beginning with safety, Slifka gave props to the police and fire departments, and chiefs Tracey Gove and Gary Allyn, for being the “best in the state of Connecticut,” as well as the work that Public Works Director John Phillips does quietly, with little praise. He said that in the past year crime is down 18 percent across the board, and accidents are down 17 percent since the implementation of traffic calming and other measures. He also highlighted the entrepreneurial nature of front-line workers in town departments in seeking grants to assist their efforts.

A change in the state law now allows municipalities to choose their local ambulance providers, and Slifka said that consideration is being given to bringing that role inhouse to the West Hartford Fire Department where most personnel have EMS training. “It could truly modernize the fire department and save a lot of money in the process and perhaps bring some in,” but there are still complications and hurdles to overcome, he said.

Educating the the kids is an obvious “yes” answer, and Slifka thanked West Hartford Public Schools Superintendent Tom Moore for his dedication. He highlighted the accolades the schools have earned just in the past year, including US News & World Report’s ranking of Conard as no. 5 and Hall as no. 11 in a rating of the country’s public high schools – “both in the top 1 percent of high schools in the entire United States.”

“Last year we had two Presidential Scholars at Hall representing the state of Connecticut at the White House,” Slifka said. There are only a maximum of three students chosen per state, and West Hartford was the only town or city in the United States with two, he said.

In addition, Slifka mentioned the fact that West Hartford is the only public school district in New England chosen by the College Board to pilot the new Advanced Placement Capstone course.

These achievements are being made without significant extra spending, and Slifka praised the great working relationship between the school board and the town. “The board [of education] for many years, they don’t get a lot of credit for this, has exhibited extraordinary fiscal discipline,” Slifka said. In terms of per pupil spending, West Hartford was ranked 109 out of 169 last year. Ten years ago the town was ranked no. 82.

When assessing “value for home and tax dollars,” Slifka mentioned several accolades the town has received, including Time/Money Magazine’s ranking of West Hartford in the “Top 50 Small Cities” for the best places to live in 2014. The Movoto real estate blog also ranked West Hartford in the “Top 10 Places to Live in New England” last year, he said.

Slifka praised the work of Executive Director of Human Resources Rick Ledwith for the work he has done in negotiating contracts with unions to avoid arbitration and reduce the town’s pension and health care liabilities.

The town’s budget proposal for the upcoming fiscal year is still in final development, but Slifka said all agree that a dominant concern is the “impact of the state’s budget deficit and the impact of Educational Cost Sharing [ECS] that we get from the state.” The state, based on their own formula, indicated that West Hartford’s ECS shortfall last year alone was $37 million.

Over the years, without that ECS shortfall, we might have had nothing but tax decreases, he said.

And although some may see West Hartford’s mill rate as high, an “equalized mill rate study” that did an “apples to apples comparison” of Connecticut towns found that West Harford had the “ninth best home value in all of the state of Connecticut.” The top eight were all “gold coast” Fairfield County towns, he said, and the next Hartford County town was no. 15.

“Are we creating an environment for economic growth? Absolutely,” Slifka said.

“Last year we’ve approved, or we have in the planning stages, 785 housing units.” That’s the largest number of new housing units since the 1950s, he said.

“We’ve had $175 million in estimated investment, that is the largest single year investment in West Hartford history, and it’s a projected tax impact of $3.5 million,” said Slifka.

He compared last year’s activity to Blue Back Square – a $150 million investment that added 120 housing units. The Hartford baseball stadium, he said, is only a $60 million investment, and the Bank of America building apartment building is valued at $70-$120 million. “These, plus the entire Front Street development, are all subsidized.”

The projects in West Hartford are “purely the product of private investment and faith in this market,” he said.

The highlight of the major commercial development is the hotel, and that work should begin once the weather warms up. New small business has also been positive, Slifka said, and he highlighted recent openings of World of Beer and Eyeglasses.com in Blue Back Square, as well as the move and expansion of Akua Ba Fitness.

Some other good news, Slifka said, is that the bids for construction of the new Charter Oak International Academy, which were received last week, came in $2.5 million under budget.

“This development is happening in all corners of the town.”

To sustain the momentum, Slifka said, “Our future success will have to be based on the very same principle – that people want to be here.” New housing units will bring in new residents, new customers, growth in the grand list, and greater choices. The changing demographics with the new types of housing won’t strain the school system, he said.

Specific things that Slifka would like to see the town pursue in 2015 include redevelopment for mixed use and higher density in commercial districts, targeting property assemblages, staying committed to high quality design, and “pursuit of transit-oriented development in the New Park Avenue corridor.”

The state’s recent announcement of bond funding for design of a rail station in West Hartford is a “very good first step,” Slifka said. The town recently revised the zoning code to permit residential development in that area, which will also benefit the New Park area, Slifka said.

Challenges, that fall into the “category of things that would slow our momentum,” Slifka said, include the town’s pension and longterm liabilities. “We have been on a track that is working,” he said, and that although it will be a long time before those expenses go down, it’s begininng to flatten.

“There are the parking kiosks in the Center. I think they’ve been great, but I know that’s not a uniform opinion.” They are continuing to be tweaked every day, he said.

“I am hopeful that we are, through the complete streets, are going to have more bike friendly routes in town,” he said. The problem, that other nearby towns don’t have, is capacity on our streets. “It’s a really hard debate.”

“We have not kicked the can down the road,” Slifka said, regarding leaving a responsible legacy. “We are strong as evidenced by our schools, by our financial state, but the variety of parks and recreational facilities we have … the vibrant commercial districts, the housing values, the environmental initiatives that we’ve pursued.”

“Bottom line is that people want to be here, they want to live here, work here, and also they want to visit here.” Slifka said it’s not by accident.

“We focus on results, on getting the job done.”

“The proudest achievement I have … it’s that we’ve never taken a shortcut – not once,” said Slifka.