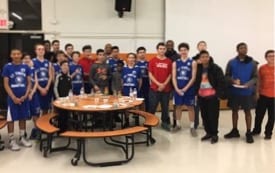 St. Timothy Middle School and the American School for the Deaf basketball teams learned new ways to communicate on and off the court. 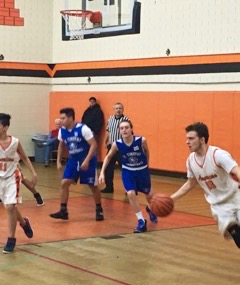 The boy’s basketball teams from St. Timothy Middle School (STMS) and the American School for the Deaf (ASD) competed in a game of basketball on Feb. 15, but learned skills that will serve them far beyond the court.

The game was arranged between STSM Athletic Director and history teacher Thomas Driscoll and ASD Athletic Director Lou Volpintesta, because they felt the teams could learn lessons that both schools teach as part of their missions.

The game provided a fantastic opportunity for the students from St. Timothy to learn from their hearing impaired counterparts. One student, Chase Collyer from STMS said after the game, “I never realized how much I rely on my hearing during a game. It is so much more than whistles and buzzers. I can tell when running down the court where the ball is behind me or if an opponent is approaching from behind to block my shot. I can’t believe how well these guys can play without that sense.”

After the game the boys all enjoyed a dinner together and really took a new twist to communicating. Without any prompting they all took out their phones and started sending each other notes and texts. In today’s world they were able to bond over the love of the game and the technology made it easy for them.

Gio Cuevas, an 8th grader at STMS said, “The whole night made me really grateful to have my hearing but when playing basketball, we all forgot that and just enjoyed the game!”

“Before my students left for the game I taught them enough sign language to be functional and conversational,” STMS Principal Tara Bellefleur said. “However, to my surprise, they found their own more efficient solution, as children often do, using their cellphones to text each other and friend each other, in methods that would last long after this game was over. We are always telling our children to put away their cellphones. Yet, in this case, their cellphones were instrumental in providing a wonderful way to communicate. I have never been so happy to see my students communicating on their cellphones as I was at this after game celebration.”

Driscoll commented, “What a wonderful way to broaden the experiences of not only our boys, but also the boys from ASD. The special moment for me was meeting Lou and seeing in his eyes the joy and satisfaction that we were able to pull this off.” 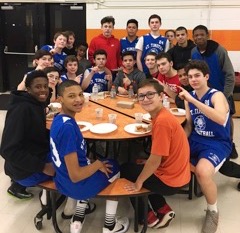 St. Timothy Middle School is a Catholic Middle School serving grades 6, 7 and 8 in the greater Hartford Mission Statement We are a Roman Catholic community that fosters the development of mind, body and spirit in a challenging academic environment. We guide students to realize their full potential in becoming productive and ethical people who will contribute to a more just and peaceful world.

The American School for the Deaf (ASD) offers deaf and hard of hearing students ages 3-21 a full range of educational programming from pre-school through twelfth grade. Working together with parents and local school districts, ASD staff develop an educational program designed to meet the unique needs of each student. Classes are kept small to meet the needs of diverse learning styles. All Pre-K-12 curriculum offerings are based on State of Connecticut Common Core State Standards as established by the state Department of Education.