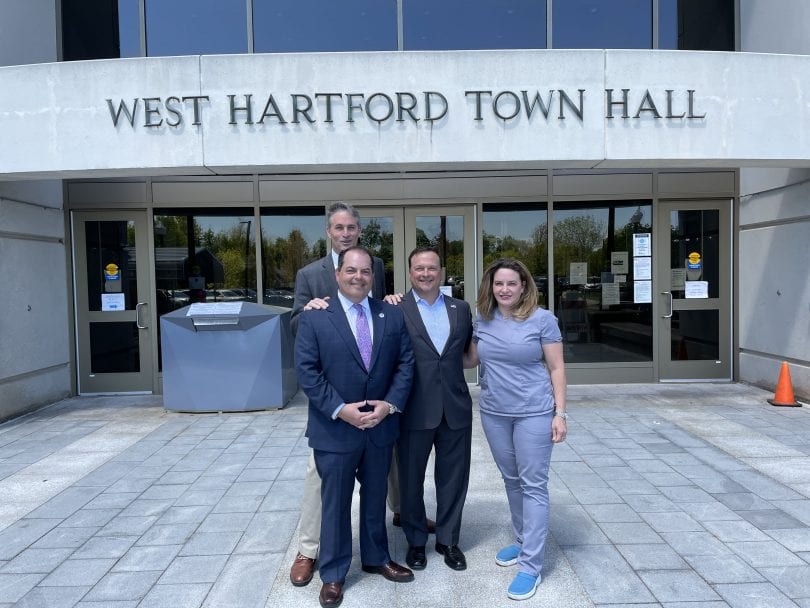 Front row (from left) Lee Gold, Mark Merritt, and Roni Rodman, and (back row) Rick Bush, all left the Republican Party Friday and will be running for Town Council as a third-party slate. Courtesy photo (we-ha.com file photo)

West Hartford Republican Town Committee Chair Mark Merritt and Minority Leader Lee Gold announced Friday that they have resigned from the Republican Party and along with two other candidates will be running for Town Council this fall as candidates of ‘A Connecticut Party.’

In a major local political shakeup likely to have a ripple effect statewide if not beyond, the leadership of West Hartford’s Republican Party entered Town Hall Friday morning and when they departed, they were no longer members of the GOP.

West Hartford needs and wants an alternative to the current two-party system, Merritt and Gold said, and the four plan to form a slate of candidates in West Hartford running under the label of “A Connecticut Party,” the party of former U.S. Sen. and former Gov. Lowell Weicker and former Lt. Gov. Eunice Groark. ACP also endorsed former Sen. Joe Lieberman.

A Connecticut Party “will establish a ‘Rational Alternative’ to the current political landscape” they said in a news release Friday.

The exodus from the Republican Party has headlined national news in the wake of the attack on the U.S. Capitol in January.

“Why now? The removal of Rep. Liz Cheney, WY, is the final straw on how the National Republican Party continues to turn a blind eye towards the truth,” the news release states. “The events on January 6th were an abomination to our democracy. While it was hoped that the leadership at the national level would have acknowledged the recent past and moved on, that has not happened.  The current path that the GOP is on will affect us on the local level.”

“There needs to be a moderate, centrist voice,” Gold told We-Ha.com.

“We will be running a slate of very like-minded, open-minded thinkers who will be transparent,” Gold said, looking to serve without being bridled by a party label.

With a platform that reflects fiscally conservatism yet promotes dialogue on social issues, Gold said the slate of A Connecticut Party candidates should appeal to a large percentage of residents, most of whom espouse “mainstream” ideals and neither ultra-right conservatives nor progressives.

“It will be the party of strategic consolidation, constructions – cranes in the skyline, open and equal education to modernize the progress made to date,” the release states. “The West Hartford community is diverse and engaged, and thus requires an alternative view on how we should approach governing. The current dynamics of our national and state political landscape need a break from the political divide and need a voice that is based on moderate perspectives, respect for different views, and creates unity, a Rational Alternative.”

Gold, whose family has a long history with the Republican Party in the state, said he has spoken with some of the former members of A Connecticut Party.

He said his decision to withdraw from the Republican Party, to which he has belonged ever since he began exercising his voting rights, was made “with a heavy heart.”

Gold said, however, he has been concerned about the GOP’s direction. “I was appalled at the events of January 6th at our nation’s capital and continue to question the parties’ leaders. Most recently, Liz Cheney was stripped of her position of leadership. Where does this end?”

Gold said said that President Joe Biden was elected by a “free and open election,” and he is encouraged that more than 140 million Americans had their voices heard.

As the state emerges from the pandemic, local government is more important than ever, Gold said. “Now is the time we need innovative and forward-thinking ideas. We cannot live in the past; we must learn from the past.”

Balancing the budget, being open and inclusive to all, fighting injustices worldwide and at a local level, and concern for the environment are what he – and A Connecticut Party – stand for, Gold said.

“I have heard from my colleagues that words matter,” said Gold. “I agree, however I also feel that one’s actions help to define who you are and are just as powerful.”

Gold said he has hope for the future and hopes to move forward “with purpose, transparency, and urgency” to help move the community toward a better future.

The website for the newly-resurrected party (aconnecticutparty.com) will be live early next week.