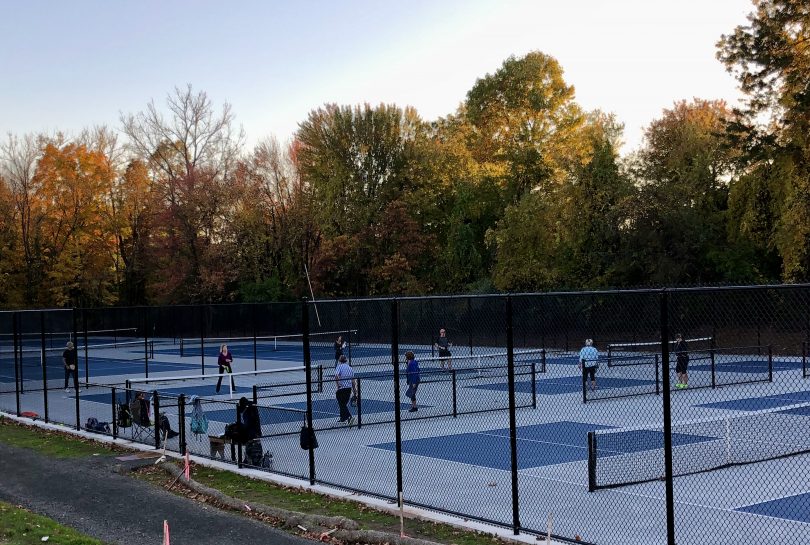 West Hartford Town Manager Matt Hart said Wednesday that the town has agreed to light the courts at Wolcott Park and keep the nets up until winter weather arrives.

The pickleball courts at Wolcott Park will remain open until the first major winter storm arrives, West Hartford Town Manager Matt Hart said Wednesday, allowing the community to continue to participate in the sport for longer than originally planned.

“I think I can speak for all of the pickleball players that we’re very happy with that decision,” said Jason Hill, a United States of America Pickleball Association (USAPA) ambassador, pickleball instructor, and the administrator of West Hartford’s Pickleball Facebook group, which currently has 435 members.

Pickleball has become an increasingly popular sport nationwide, and naturally lends itself to social distancing. Amid the COVID-19 pandemic this year, it’s gained even more participants in the West Hartford community.

The Town of West Hartford had recently posted on the Leisure Services web page that the lights for the pickleball courts at Wolcott Park – as well as basketball and tennis courts – would no longer be turned on in the late afternoon and early evening “in response to the Governor’s new guidelines,” and also informed members of the pickleball community that the nets would be removed in early December.

Pickleball players posted on Facebook about how upset they were about the decision to close the courts, and also expressed their opinions in emails this week to Hart as well as Mayor Shari Cantor and Leisure Services staff.

Gov. Ned Lamont’s latest mandate regarding sports – which paused team sports from Nov. 23, 2002-Jan. 19, 2021 and added other requirements such as the wearing of masks in gyms at all times – is not actually intended to prohibit or limit the participation of individuals in outdoor recreational sports.

“We understand your desire to continue playing into the winter months,” Hart said Wednesday in a letter emailed to members of the pickleball community and shared with We-Ha.com.

Hart said the Wolcott courts will remain open, with the nets in place and the lights turned on through 8 p.m. daily, until the first winter storm. The community will be informed if and when the courts will need to be closed for the season.

“Once we have our first major weather event we will need to close the Wolcott courts in order to protect the nets and the playing surface from damage. As you may know, freezing temperatures and ice will damage the nets, and the weight of an icy net can cause the anchoring posts to bend. We are also concerned about protecting the surface of the courts. We have seen damage to the playing surface in previous years from unauthorized shoveling and treatment,” Hart said in his letter.

The courts at Buena Vista – which are built for tennis and also have markings for use as pickleball courts – will remain open throughout the winter. Hart said those courts will continue to be cleared by Leisure Services, and will be available for use at players’ own risk.

“To prolong the life of the equipment and to protect the structural integrity of the courts, the town will remove the tennis and pickleball nets at all of its other locations for the duration of the winter months,” Hart said.

COVID-19 safety protocols must be followed by those who are using the courts at Wolcott Park and Buena Vista. Groups are limited to four people on each court, and players must maintain 6 feet of distance between each other “using face coverings as appropriate,” Hart said.

“If we receive complaints and note repeated violations of the rules, we will need to close the courts to prevent community spread of COVID-19,” Hart added.

Hill said the pickleball community has been very good about following protocols throughout the duration of the pandemic. Outdoor play is a safer option than indoor, and he is hopeful that the town will be able to leave the nets up as long as possible. He said he would love to see at least some nets left up all winter.

“By and large we’ve shown that pickleball can be played outdoors safely,” Hill said.

Hill said that the pickleball community is in the process of formalizing a leadership organization, which will be used to communicate and work with the town.

In the future, Hill said, he would like to see the sport further expand and would like to offer skills clinics and host tournaments, professional exhibitions, and fundraisers.

The goal, said Hill, is to be inclusive and expand and promote the sport in West Hartford – across generations and skill levels, from beginners to those who are nationally ranked.