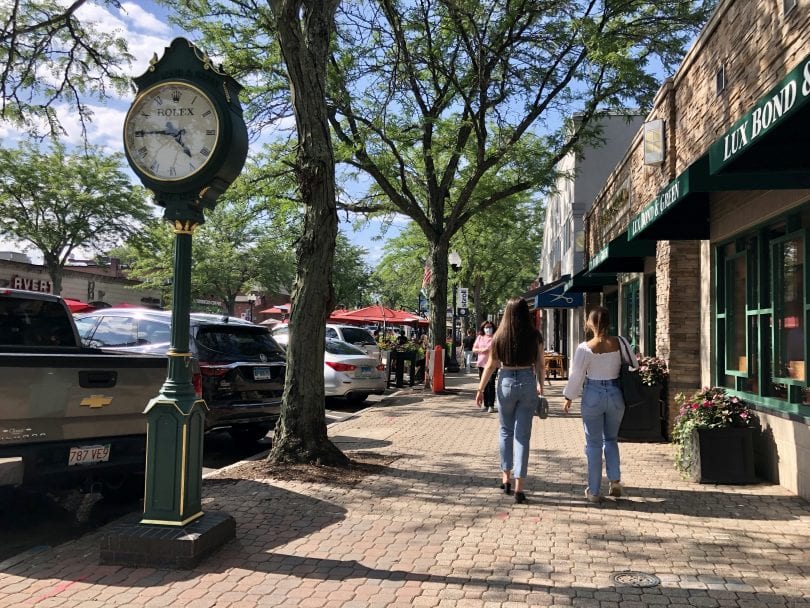 At a meeting of the Town Council’s Finance and Administration Committee, Town Manager Matt Hart outlined staff recommendations for use of the American Rescue Plan Act funds the town has been awarded.

West Hartford will be receiving more than $37 million in American Rescue Plan Act (ARPA) funds from the federal government, intended to assist the town in recovering from the COVID-19 pandemic, and during a meeting of the Town Council’s Finance and Administration Committee last week Town Manager Matt Hart outlined an array of projects to utilize the money in constructive and high impact ways.

Some of the most visible uses suggested by Hart include upgrades to the Center such as widening sidewalks to permanently accommodate more outdoor dining and retail without having to convert parking spaces. ADA accessibility would also be enhanced, he said.

“We know our sidewalks are old,” Hart said, and part of the effort would include replacing tree wells.

Other enhancements include turning the alleyway between LaSalle Road and South Main into a roadway which will also increase access to the Town Center garage, installing retractable bollards to facilitate easily closing off LaSalle Road (and Isham Road), updating way-finding signage, and building public restroom facilities perhaps similar to the vending model Newport has along the Cliff Walk.

Another suggestion is the addition of kiosks with charging stations in the Center and Park Road area, modeled after the NYCLink system.

Funds are able to be used to “promote economic viability and livability, sustainability, improve customer service, provide budget relief, and for public health and safety,” Hart told the committee, as well as to support diversity, equity, and inclusion initiatives.

Hart has suggested using $1 million to establish grants – possibly under a matching arrangement – that could assist arts, cultural, and nonprofit organizations, and using another $1 million to assist small businesses recover from the impact of the pandemic. The dollar amounts are just suggestions to initiate the conversation, he told We-Ha.com.

Accessibility improvements at town parks, including Spice Bush Swamp, sustainability projects, and upgrades to playgrounds and other recreational facilities such as Veterans Rink are also among the suggestions.

“We want to utilize this funding to the extent we can to finance projects and initiatives that are going to have long staying power for our community,” he told the Finance and Administration Committee members. “You do not want to squander this opportunity.”

Hart’s suggestions total $18.86 million to be paid out of ARPA funds, as well as $6.6 million going to bonded projects.

Some items that the town has already earmarked for bonding under the Capital Improvement Plan (CIP) or as Capital Non-Recurring Expenditures (CNRE) will be back-filled through the ARPA funds, Hart said. Examples include just over $1 million for body cameras for the police department, a new pool at Eisenhower Park ($2.3 million), rehabilitation of Park Road ($1.5 million), a new building for the Hillcrest Area Neighborhood Outreach Center ($750,000), the addition of electric vehicle charging stations throughout town ($300,000), and upgrades to the recycling and waste transfer station ($1.75 million). Bond monies could then be reallocated to other projects.

In addition to input from directors and other staff, Mayor Shari Cantor provided extensive feedback as the suggested uses of the funds were being developed, Hart said.

“This unprecedented funding gives us the opportunity to respond to the health and well being of our community – including the health response to the this pandemic and preparedness for further health challenges,” Cantor told We-Ha.com. A separate allocation will “provide our schools with needed resources to support our students learning,” she said.

“These dollars will be used as investments to make a positive long term impact to benefit the community. It gives us the opportunity to invest needed dollars into storm water infrastructure, economic vitality, cyber security and IT investments, public health and safety investments, and sustainability projects,” said Cantor. “We also will support people and businesses that have been adversely impacted and have not be able to get previous support. We are establishing grant opportunities for these small businesses and non profits to assist them.”

The town has already received half of the ARPA funds, with the remainder expected next spring. The funds must be “obligated for use” by Dec. 31, 2024, and spent by Dec. 31, 2026, Hart said, but he is not proposing allocating all of the funding at this time.

The committee had its first look at Hart’s suggestions at its Sept. 30 meeting, and will plan to continue discussion at their October meeting, Hart said. Following that, Hart recommends that staff initiate an outreach and engagement effort to small business and nonprofit communities, and also arrange virtual public forums and an online survey to encourage input and feedback.

“We believe these allocations meet the Treasury’s criteria and will have a significant long term positive impact to our community,” Cantor said.