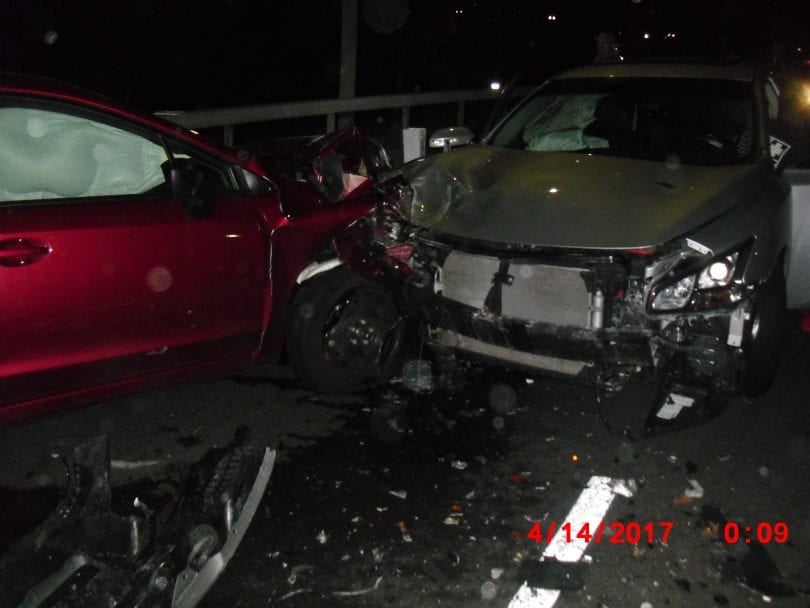 In a 24-hour period, West Hartford Police charged two drivers – one of whom caused a head-on crash – with DWI and illegal cellphone use on Trout Brook Drive.

Two women using their cellphones while driving north on Trout Brook Drive this week have been charged with not only illegal cellphone use but also DWI, and one of the women faces additional charges after crashing head-on into another vehicle.

West Hartford Police are in the middle of an increased enforcement period for distracted driving, and according to police Off. Jeff Swank was on patrol Thursday, April 13, at 6:15 p.m., when he saw the operator of a Toyota Prius taking on her cellphone while heading north on Trout Brook Drive.

Swank stopped the car, which had turned onto Farmington Avenue, and after an investigation issued an infraction for illegal cellphone use as well as DWI to Lauren Persenaire, 30, of Farmington.

West Hartford Police Capt. Jeff Rose said Friday that in Personaire’s case the distracted driving patrol possibly prevented something more serious from happening, while in the second case there was a head-on crash.

According to Rose, the second incident occurred just over six hours later. At 12:24 a.m. on April 14, 2017, Off. Jeff Hopkins was on patrol on Trout Brook Drive “when he saw a whole bunch of cars parked in the middle of the road.”

Rossi admitted to police that she was using her cellphone while driving. Police observed that she appeared to be intoxicated and arrested her at the scene.

At the time of booking Rossi’s B.A.C. was found to be significantly above the legal limit, and registered 0.193 and 0.175, police said.

Roberts, and her passenger, Benjamin Eisenhandler of Milford, both sustained minor injuries and were treated at the scene. Rossi was not injured.

Both vehicles were heavily damaged and were towed from the scene, police said.

Police charged Rossi with DWI, illegal use of a cellphone, and failure to drive in a proper lane. She was released on a non-surety bond and is due on court on April 27.

Rose said it was lucky that the injuries were not more severe. “It could have been awful.”

Rose said that police are always doing enforcement on Trout Brook Drive, not just during the time of the distracted driving enforcement campaign. “The difference we can make is stopping people from what they are doing,” he said, and the hope is that more serious incidents can be avoided.

The first phase of the 2017 “U Drive. U Text. U Pay” distracted driving campaign began April 4, and as of 1:34 p.m. Friday Rose said that 357 infractions had been issued. That number is about 30 more than at the same point last year, he said.

In addition to distracted driving enforcement, West Hartford Police also have officers dedicated to DWI enforcement throughout the year. The increased patrols are funded through grants from the Connecticut Department of Transportation Highway Safety Office.