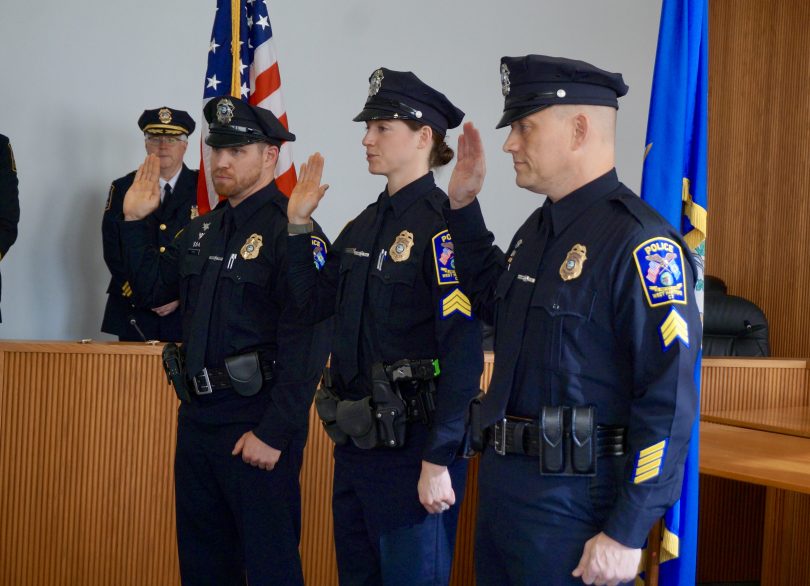 Five members of the West Hartford Police Department were honored in a ceremony Thursday. 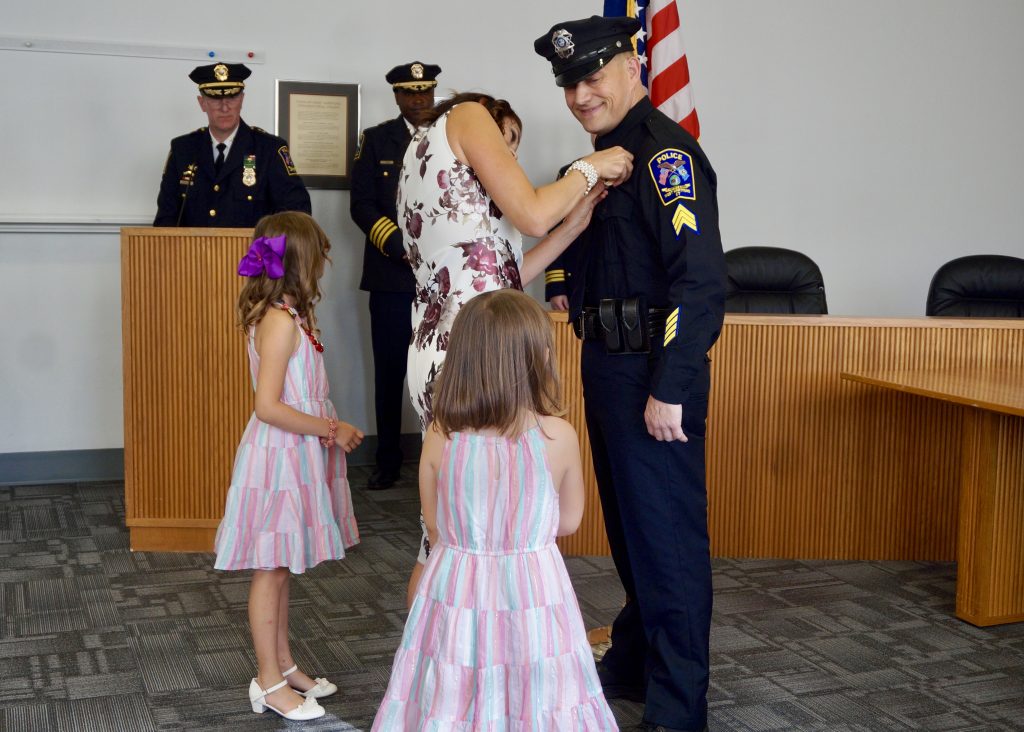 Sgt. Ray Swank is pinned by his wife, Michelle, assisted by his daughters Avery and Amelia. Photo credit: Ronni Newton 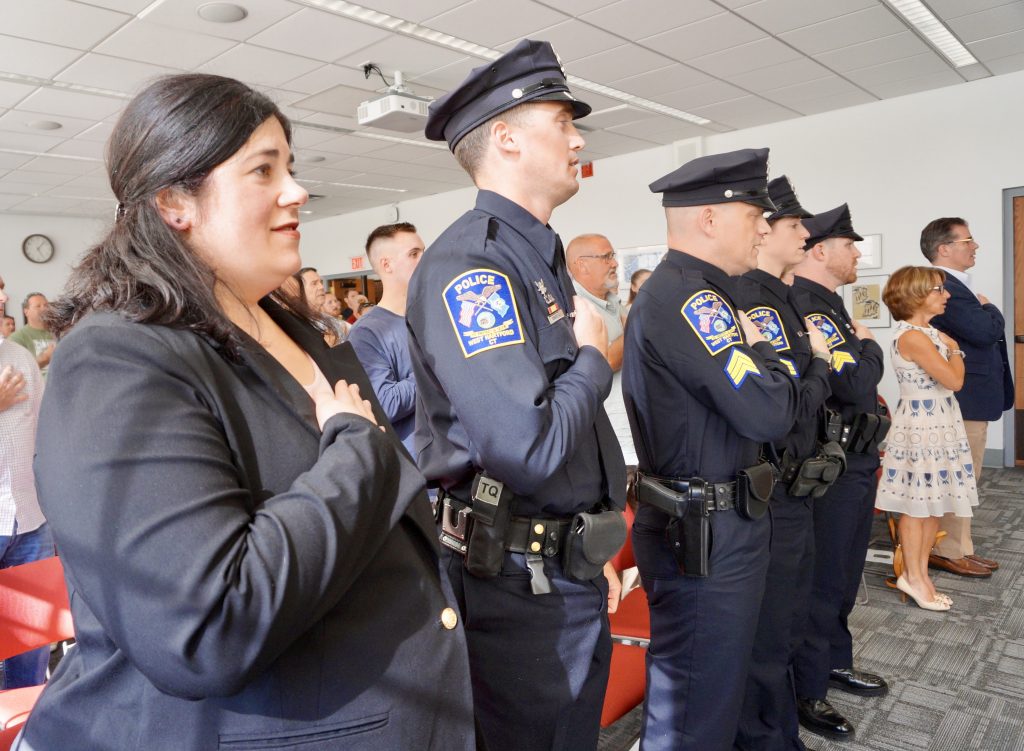 “Thank you to all for coming, for the families, you should be really proud of your loved ones,” Riddick said. “A lot of hard work, dedication, studying … this are the fruits of their labor.”

Riddick said that as chief, promotions and award ceremonies are the most joyous occasions and it’s important to acknowledge the hard work of staff. “This is the one time time that your loved one can have a big head for a short amount of time,” Riddick said.

“You must do your job,” Riddick said, addressing the the newly-promoted. “The first line supervisor’s position is very difficult position and a very important position.”

Three department members were promoted from the rank of officer to sergeant.

Sgt. Ray Swank will now be assigned to “A” Squad Patrol.

Swank grew up in Muncy, PA, and the youngest of five followed in the footsteps of his older brother, Jeff, and joined the U.S. Marines, where he graduated first in his class and served from 1990-1995, said Coppinger, who read the bios of those being promoted.

Swank earned his bachelor’s degree from the University of Pittsburgh, and embarked upon a career in law enforcement. He was hired by the West Hartford Police in 1999, joining his brother, Off. Jeff Swank.

“Over the years, Ray has received numerous letters from citizens praising him for his investigative efforts to their respective cases. Ray has also received awards during his career,” Coppinger said, including for seizing quantities of drugs that set records in the department.

Coppinger also shared the following anecdote: “Ray was awarded a Merit Citation for his part in an incident in which an intoxicated man going through a divorce was attempting what is commonly referred to as ‘suicide by cop,’ demanding that officers on scene kill him. He was in his front yard wielding a sword. While Off. Bill Norton was able to distract the distraught man, Ray was able to deploy his Taser and the man was successfully detained so that he could get the care that he needed.”

Ray Swank has earned his master’s in criminal justice through a cohort program between West Hartford Police and Central Connecticut State University, and lives in New Britain with his wife, Michelle, and daughters Amelia and Avery.

Sgt. Sara Nagle will now be assigned to “B” Squad Patrol. 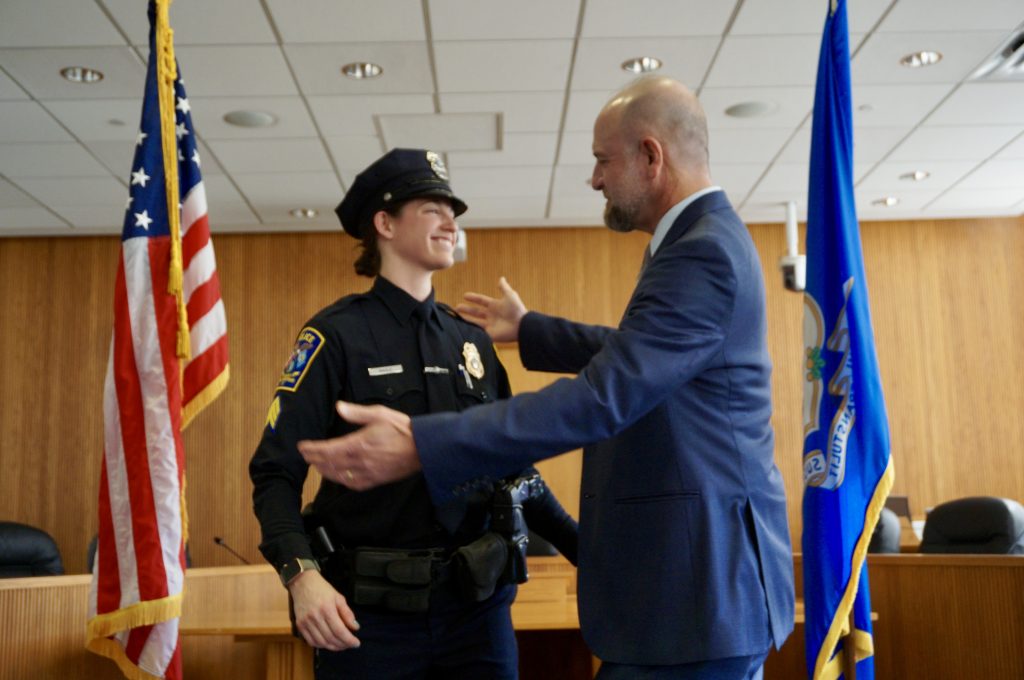 Sgt. Sara Nagle gets a hug from her father, retired Off. Thomas Nagle, who pinned her Thursday. Photo credit: Ronni Newton

A native of Manchester, CT, Nagle was a two-sport athlete at Manchester High School and earned an academic and athletic scholarship to Stonehill College where she played soccer and graduated in December 2012 with a degree in criminology.

Nagle joined her father, now-retired Off. Thomas Nagle, at the West Hartford Police Department in February 2013.

While an officer, Sarah Nagle was accepted into the University of Connecticut’s Department of Public Policy, attending graduate school part time and earning a master’s in public administration in May 2017.

In addition to working for the West Hartford Police Department, she is vice president of the Department of Public Policy Honor Society and part owner of a CrossFit gym.

She has been a member of the West Hartford Police bicycle squad and has attended numerous training courses.

“In 2016, Sara and fellow officers were awarded with the Department Life Saving Award for their efforts in saving an individual who had attempted suicide,” Coppinger said.

Sara Nagle currently lives in Manchester with her fiancé, Cory Fullana, who graduated Wednesday from the Connecticut Police Academy.

Sgt. Anthony Miele III will be assigned to “A” Squad Patrol. 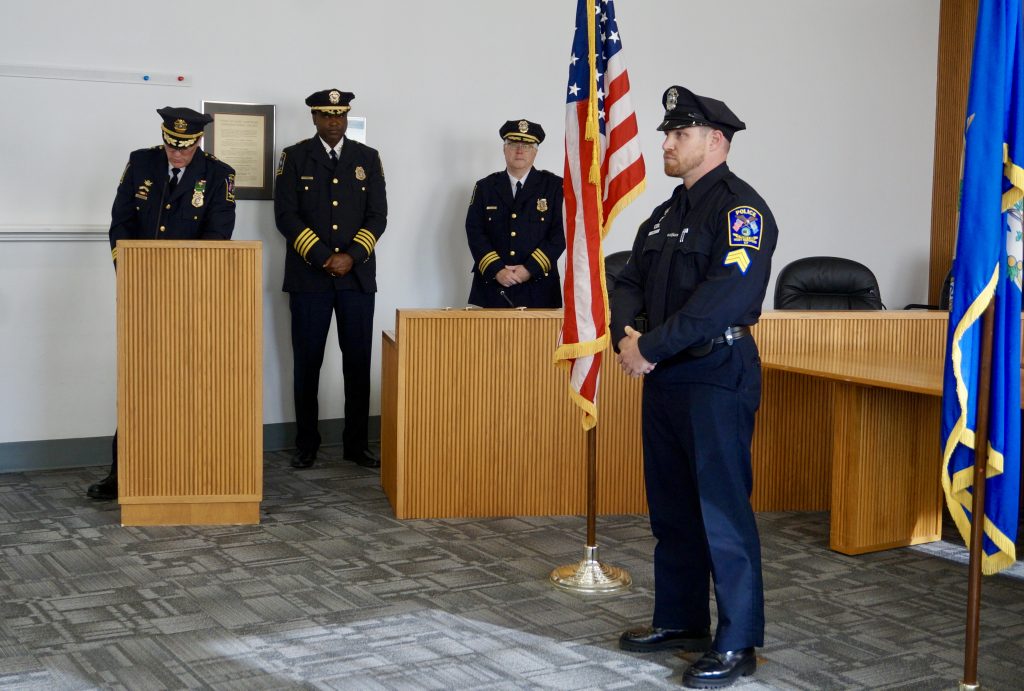 A native of Newington and a 2011 graduate of UConn, Miele joined the West Hartford Police Department in June 2012.

Miele was recently assigned to the department’s new proactive Community Support Unit, and has been part of numerous successful narcotics investigations and apprehensions of dealers and wanted felons.

“In addition to his special assignments, Anthony has also received commendations for his roles in the apprehension of a shooting suspect, the apprehension of an armed robbery suspect after a foot pursuit, and the recovery of multiple stolen motor vehicles and subsequent arrests,” said Coppinger.

Miele lives in Portland, CT, with his fiancée, Nichol Stevens.

Kyle Christian was promoted from the rank of officer to detective, assigned to the Community Support Unit. 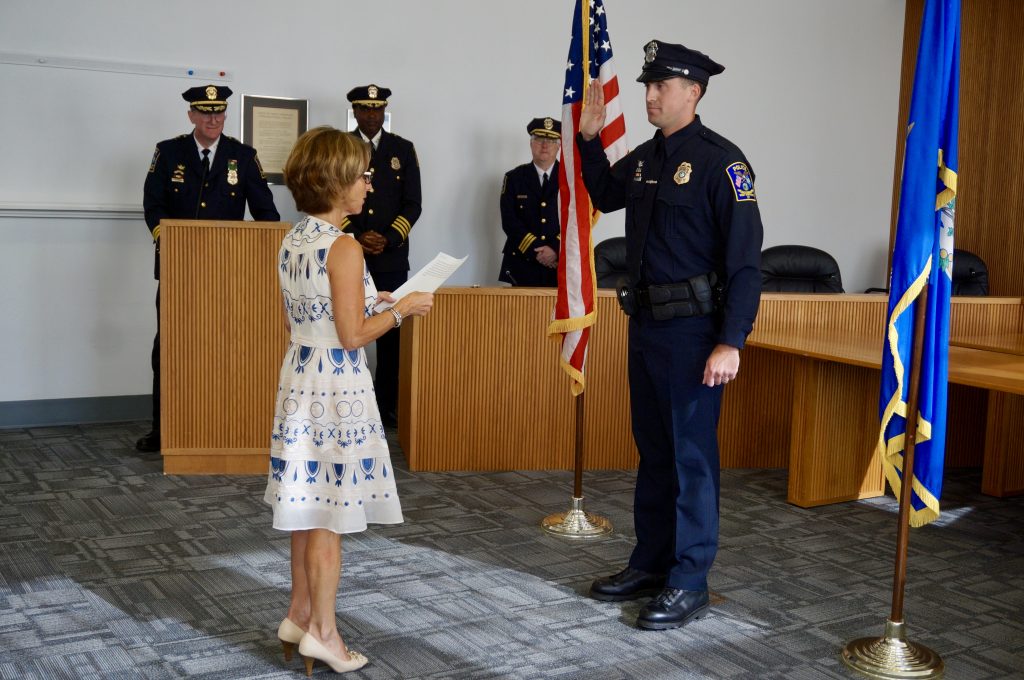 Christian grew up in Windsor Locks and enlisted in the Marine Corps as a high school senior.

He was trained as a rifleman and sniper, and served two tours of duty in Iraq, in 2006 and 2007, taking part in patrol operations and training of Iraqi police.

“Among the awards Kyle received during his time in the Marines are the Iraq Campaign Medal with a campaign star, Global War on Terrorism Medal, Good Conduct Medal, and Combat Action Ribbon,” Coppinger said.

After being honorably discharged in 2009, Christian was committed to continuing a career in public safety and was hired by the West Hartford Police Department in 2010.

He has been trained in accident investigation, is a Field Training Officer, member of the Emergency Services Unit, and also completed the Capitol Region Swat School in April. He has also received a Merit Award and Unit Citation.

Christian lives in Granby with his wife, Jessica, and their daughter, Sawyer. 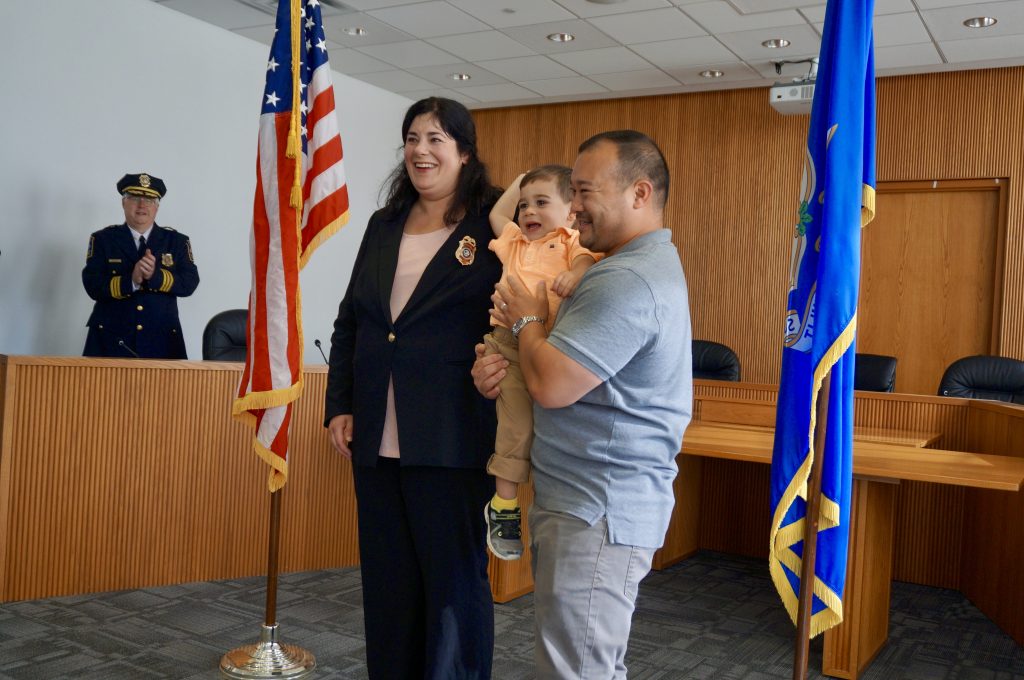 Lee grew up in Falls Village, CT, where her grandparents had a 120-acre farm and her father was an avid outdoorsman. Her love of animals was fostered at a young age, Coppinger said, with the cattle, horses, ducks, rabbits, and kittens on the farm.

“She and her family rescued their first dog from the local shelter called the Little Guild of St. Francis in Cornwall, CT.  At 16 she began shadowing her local veterinarian on the weekends,” said Coppinger.

Basketball was Lee’s other love and skill, and she played at the University of Connecticut Avery Point as a freshman. As a sophomore, she returned to northwest Connecticut and attended UConn’s Torrington branch while working for a dairy farm raising calves and as a veterinary assistant.

She interned with the Connecticut Department of Energy and Environmental Protection (DEEP) Wildlife Division in 2010, and accepted a seasonal position after graduation from UConn. When that position was ending, she saw an ad for an assistant Animal Control officer with the West Hartford Police, and was hired in May 2001.

“She has a reputation as being an incredibly hard worker, very passionate and diligent in her job. In May 2006, Helen received a Merit Award for her assistance in finding a murder suspects vehicle in Wolcott Park,” said Coppinger.

Lee and her husband, West Hartford Police Det. Brandon Lee, were married in 2013. They live in Burlington with son, Owen James, and their dogs, Molly and Winston, and are expecting a daughter in September 2019.

Mayor Shari Cantor administered the oath of office to all who were promoted, and all were pinned by family members.

In addition to the promotions, Capt. Michael Perruccio noted that several department members will be reassigned.

Sgt. Brian Cantele and Sgt. Aaron Vafiades will be reassigned to the Detective Division. 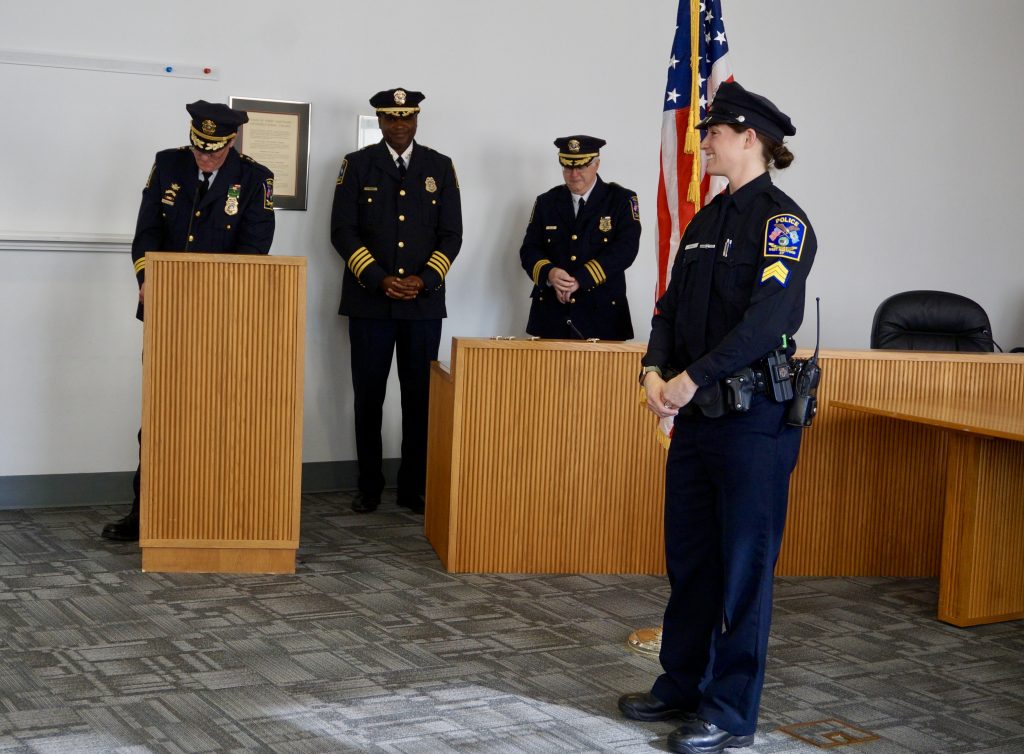 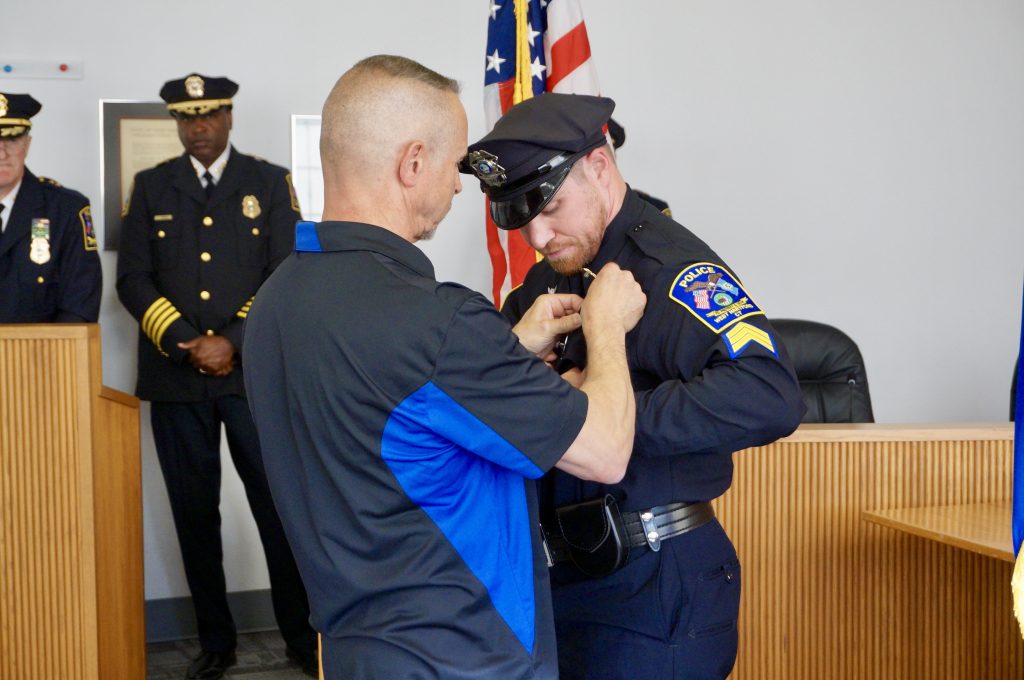 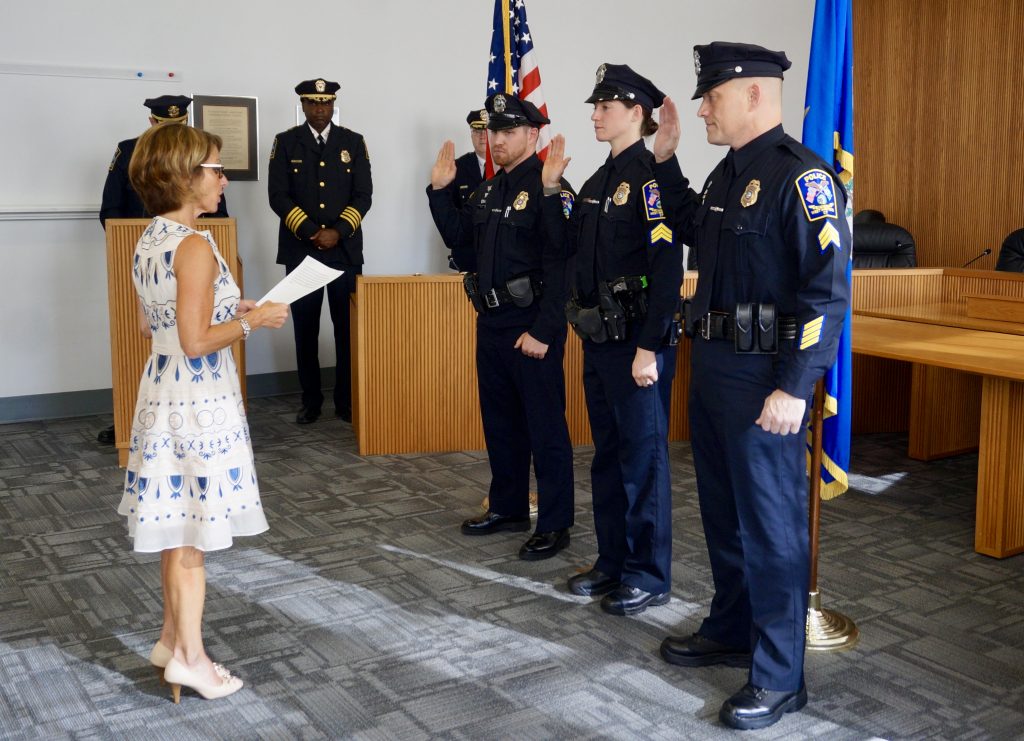 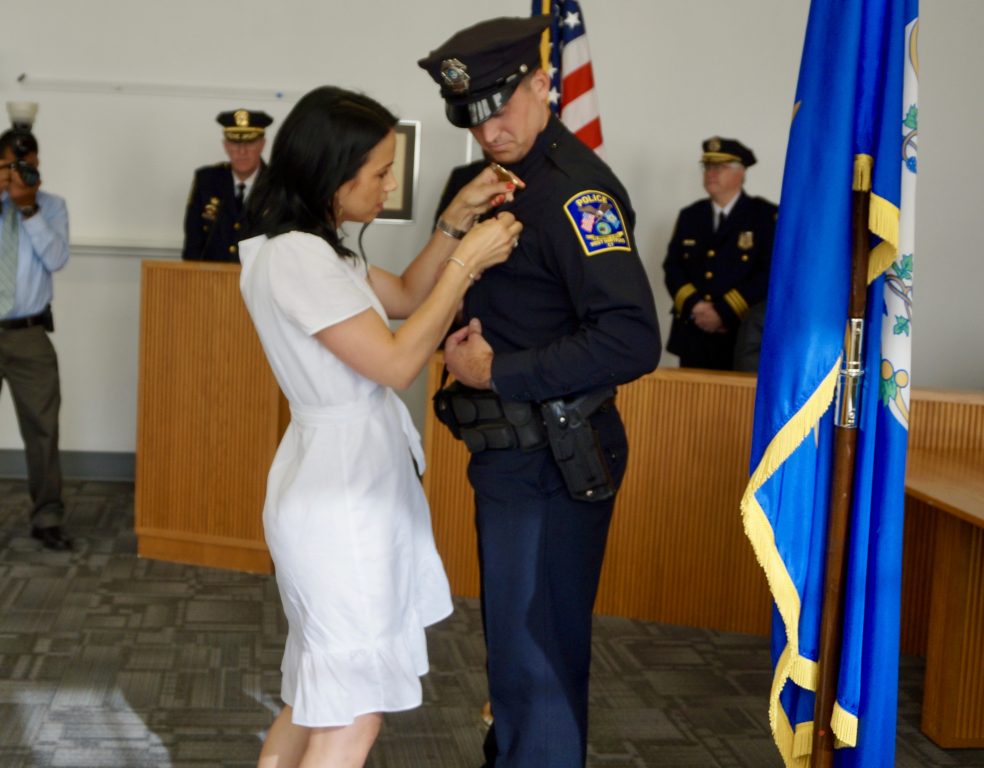 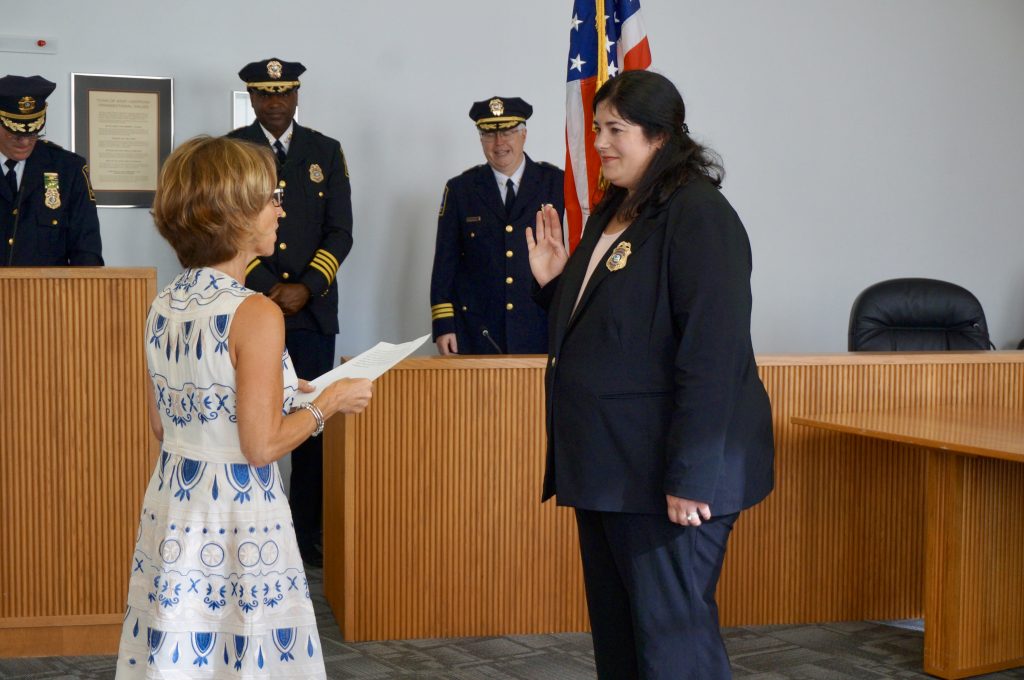