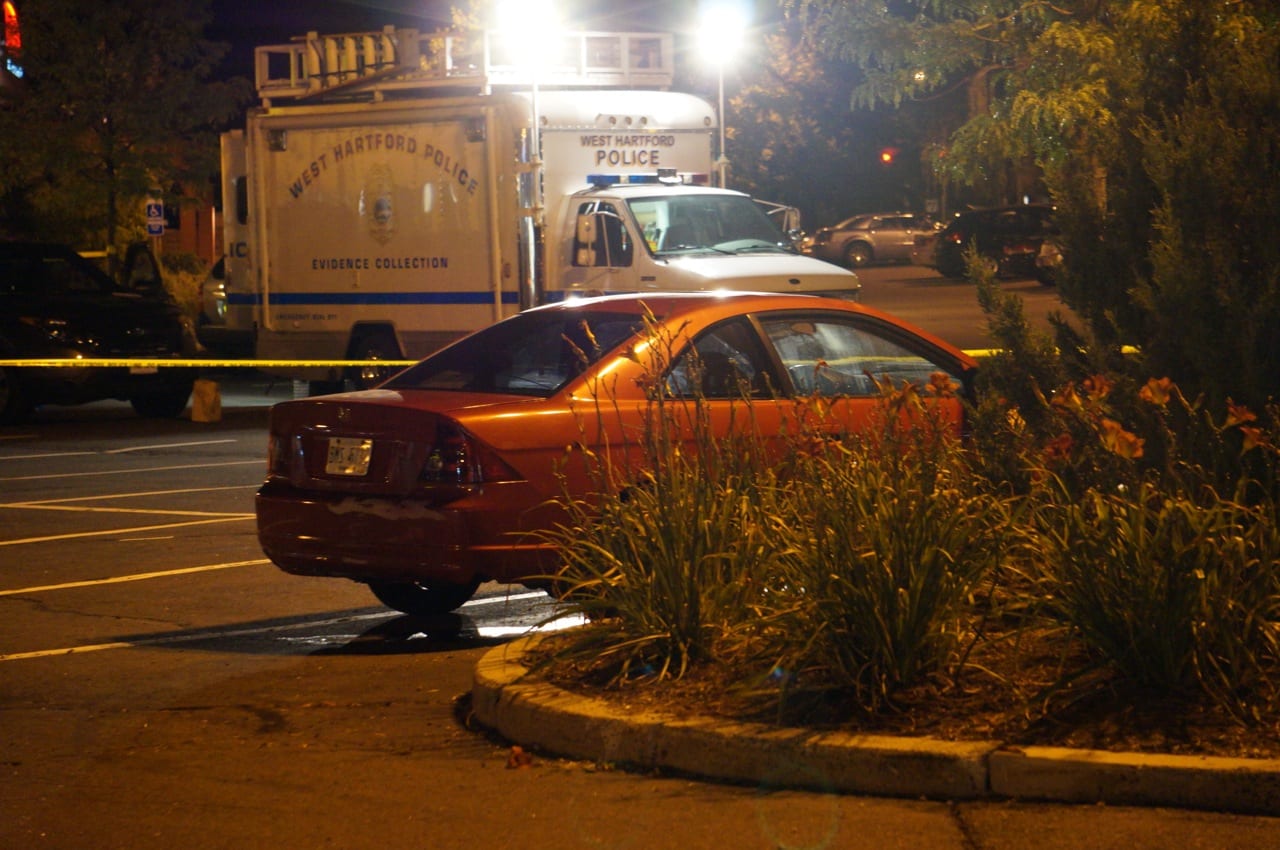 West Hartford Police are investigating this car, found with a decomposed body inside it in the parking lot at Corbin's Corner. Photo credit: Ronni Newton

The body was found in a red Honda Civic in the Corbin’s Corner parking lot. 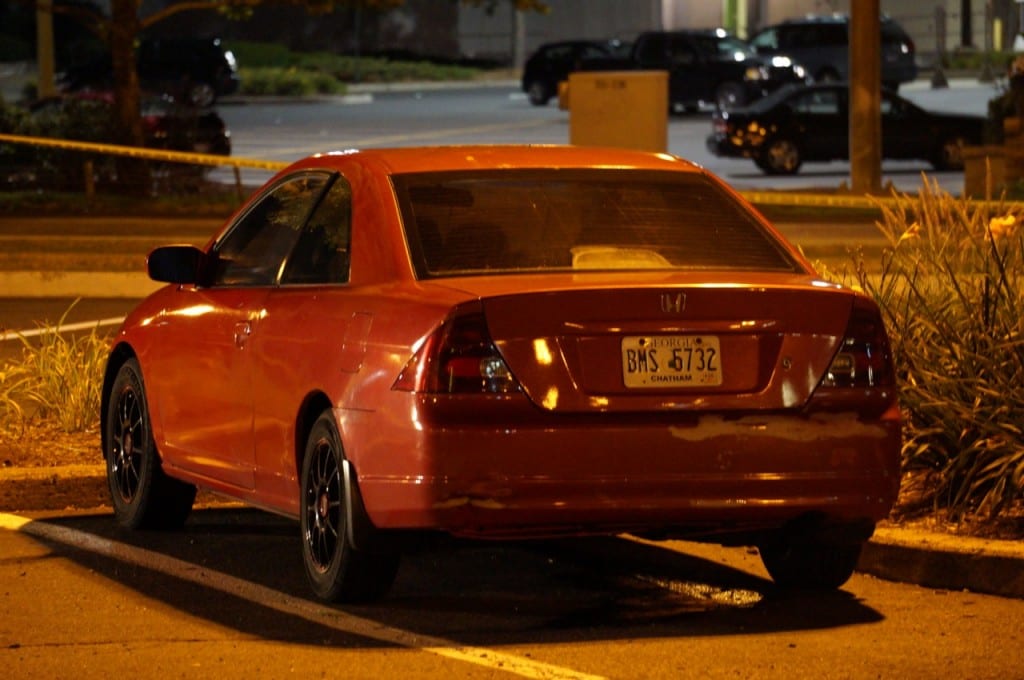 West Hartford Police have confirmed that the body found in a red Honda Civic in the Corbin’s Corner parking lot was that of an adult male.

According to West Hartford Police Lt. Ted Stoneburner, the body was located in the back seat of the vehicle and “had clearly been there for some time.”

Stoneburner said that the neither the identity of the victim nor the cause of death have yet been determined. Autopsy results will be forthcoming.

Stoneburner did conform that an alert for the red Honda had previously been issued by the Farmington Police Department, linking it to a missing person case.

According to a news release issued Monday by Farmington Police Lt. Colin Ryan, a missing person complaint was filed on Aug. 19, 2015, by the owner of Cellairis, a kiosk at Westfarms Mall. Farmington Police said that the missing male employee had “not been seen by friends, family or co-workers since he left the mall at 9:33 p.m. on Aug. 11, 2015.”

“The department is currently treating this as an untimely death and the incident poses no risk to the neighborhood,” Stoneburner said.

According to Detective Sgt. Eric Rocheleau, police were called to the scene at approximately 4 p.m. Sunday based on the report of an odor near a vehicle in the West Hartford parking lot. The vehicle was parked at the end of a row, opposite Best Buy and Red Robin.

Police discovered a decomposed body inside the car, Rocheleau said, but said it was difficult to see inside the vehicle, a red Honda Civic with Georgia plates, because the windows are heavily tinted. 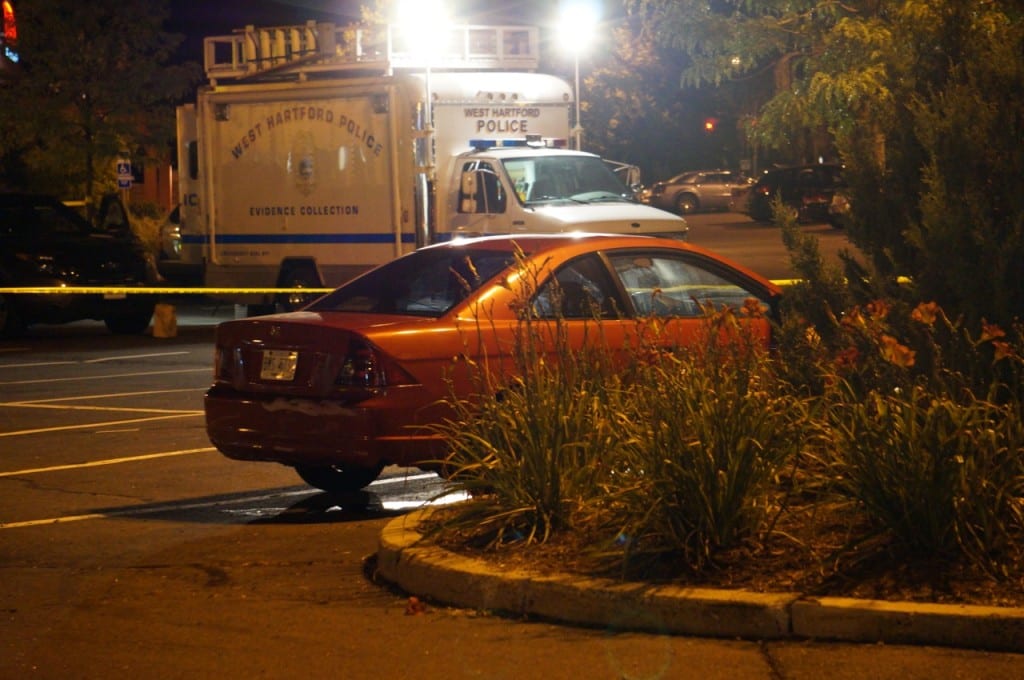 West Hartford Police are investigating this car, found with a decomposed body inside it in the parking lot at Corbin’s Corner. Photo credit: Ronni Newton

Rocheleau said that the vehicle in which the body was found had been reported as missing from Farmington, and there was also a person connected with the vehicle reported as missing from Farmington. However, Rocheleau said that police have not yet been able to confirm the identify of the body. He said that even the sex of the deceased person could not yet be determined.

Police were waiting for the medical examiner to arrive Sunday evening and take custody of the body in order to determine the cause of death and the identity.

Rocheleau could not provide much more information Sunday evening other than that it is an active investigation. “It’s suspicious in nature as far as we’re concerned,” Rocheleau told reporters at an impromptu press conference.