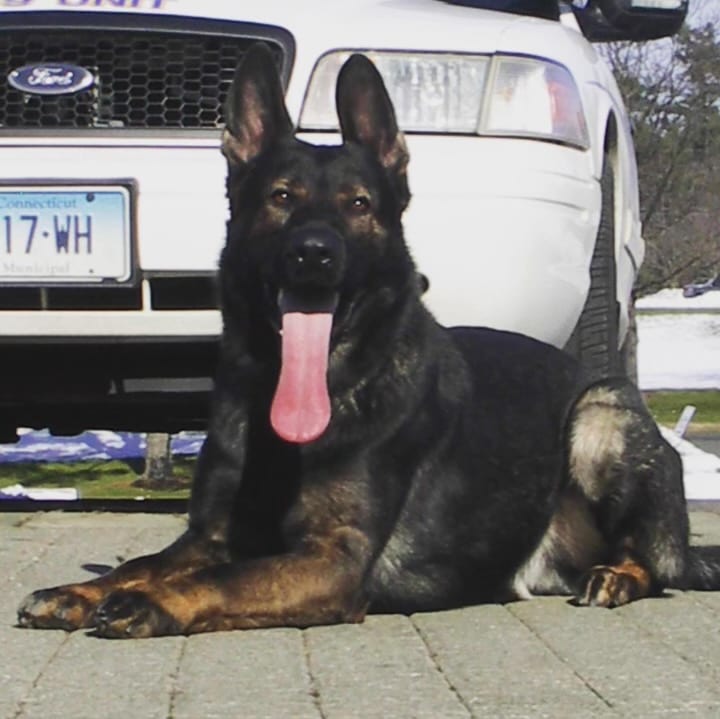 K-9 Axel, the partner of West Hartford Police Off. Nick Roman for 8½ years, retired from service in early January and was honored with a proclamation at the Town Council’s Public Safety Committee Meeting Wednesday night. 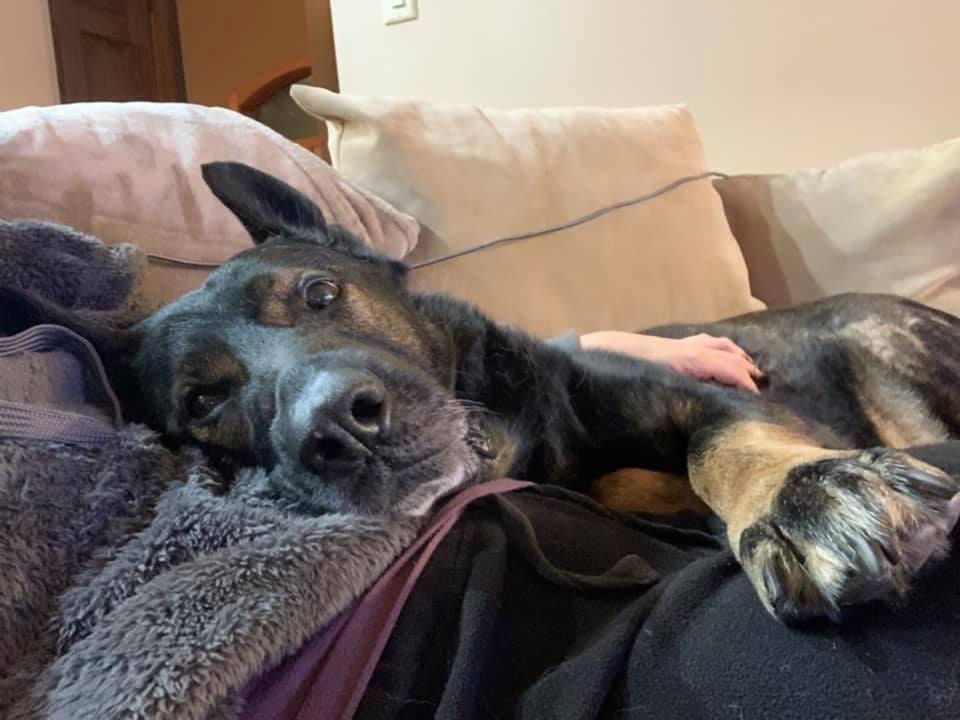 K-9 Axel in his happy place – on the couch at Off. Nick Roman’s house. Courtesy of Nick Roman

Off. Nick Roman said the best partner he could have imagined has ended his career with the West Hartford Police Department on a high note.

Axel, a 10½-year-old black and tan German Shepherd who was born in the Czech Republic, was retired from service on Jan. 8, 2021, after serving as Roman’s partner for 8½ years – transitioning from a hard-working member of the West Hartford Police Department to the full-time pet of Roman’s family, where he is living a life full of treats, playtime with his doggie sibling in the backyard, and lots of belly rubs.

“We had a really good year last year,” Roman said. “He’s phenomenal. He found a ton of people.”

The two have been partners since 2012. Roman had not been a K-9 officer prior to receiving Axel. The two attended a nine-week Patrol and Narcotics K-9 Academy that year, and have had a synergy ever since. 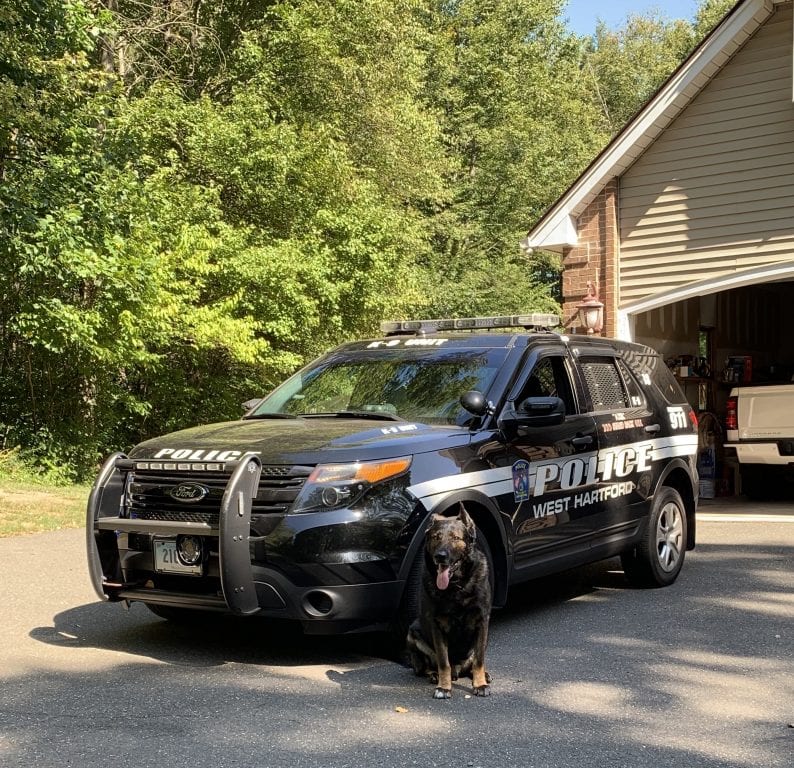 K-9 Axel sits next to the West Hartford Police SUV driven by his handler, Off. Nick Roman. Axel retired in January after a successful career. Courtesy photo

“I could not have asked for a better partner at work – or at home,” Roman said. Although Axel is still fit, he has reached the age where a K-9 typically retires. At that point, the arrangement is that the dog becomes the pet of the handler.

Throughout his career, Axel never had a problem transitioning between work time and home time, Roman said. At home he’s always been a big baby, rolling over on his back for belly rubs.

“You’d put on that leash, and it’s like a light switch,” Roman said. “I didn’t even need to tell him to do his job.” 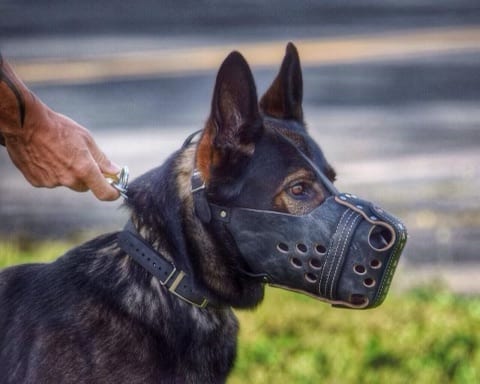 While Axel gets plenty of attention at home, and loves to play with Roman’s children, ages 7 and 8, and their other dog, he does seem to miss his job. “He is. my family buddy. He literally is my shadow,” Roman said.

Now, when Roman leaves for work, “he sits and stares out the window.” 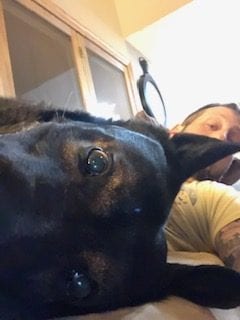 Mayor Shari Cantor, in the proclamation she read aloud March 3, issued on behalf of the Town Council and the residents of West Hartford, praised the partnership between Roman and Axel. “[T]he effective dynamic between them has led to the apprehension of felons wanted for firearms related offenses, discovery of crucial pieces of evidence which contributed to the seizure of substantial amounts of cash and narcotics, as well as the apprehension of numerous suspects actively burglarizing vehicles during the overnight hours in West Hartford.”

Roman will begin his 20th year with the West Hartford Police Department in July, and plans to retire in 2022, so he won’t be getting another K-9 partner. Instead, he said, he will be back with the regular Patrol Division.

“It’s been a real busy 8½ years and I couldn’t be happier with a partner than Axel,” Roman said during the March 3 virtual Public Safety Committee meeting. He said there were “countless calls where he has kept me safe, and times I’ll never even know about. … He’s been an amazing dog. … He’s served the police department well and I couldn’t have asked for a better partner.”

Chief Vernon Riddick said you can’t pay the K-9 officers enough for the amount of time and resources they put into caring for and training their partners. “They spend time and resources and these partners become part of their family. It’s 24/7,” he said. K-9 Axel as a young dog. Courtesy of Nick Roman.

West Hartford still has two K-9 teams – Off. Brian Delgrande and Lotti and Off. Andrew Teeter and Islay – who became partners  in 2019.

Riddick said he is hopeful the department can continue the K-9 program. “Individuals who take these assignments with the K-9s, they’re special. They really care,” he said.

Sgt. Thomas Lazure, who heads the West Hartford Police Department’s K-9 unit, noted that through Axel’s storied career he helped arrest countless criminals and seize guns and narcotics. K-9 teams are regional resources that provide mutual aid to other departments, and the list below are just some of the highlights of Axel’s work in West Hartford and elsewhere:

Lazure said there were countless other calls in West Hartford and throughout the region where Axel served the public and protected Roman. The two have always had an incredible bond, he said. 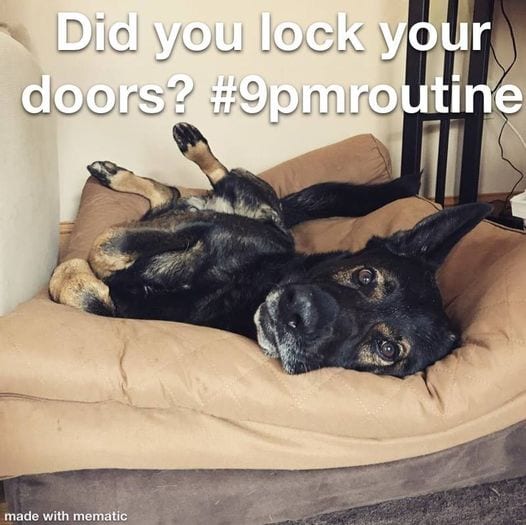 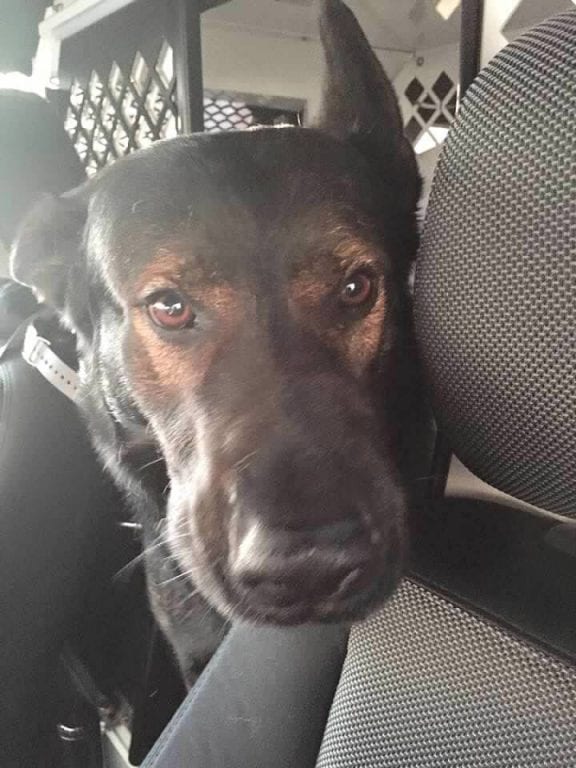 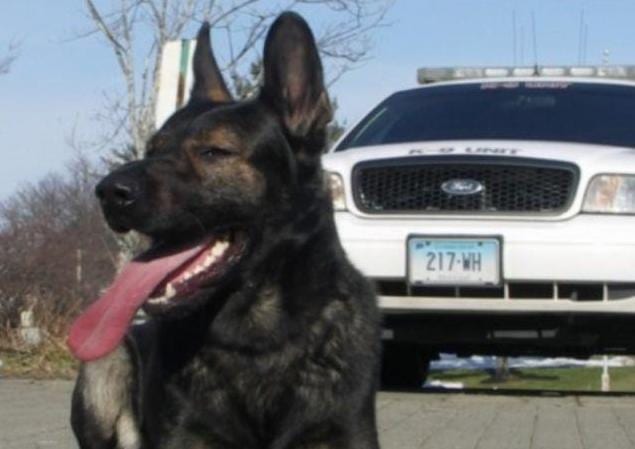 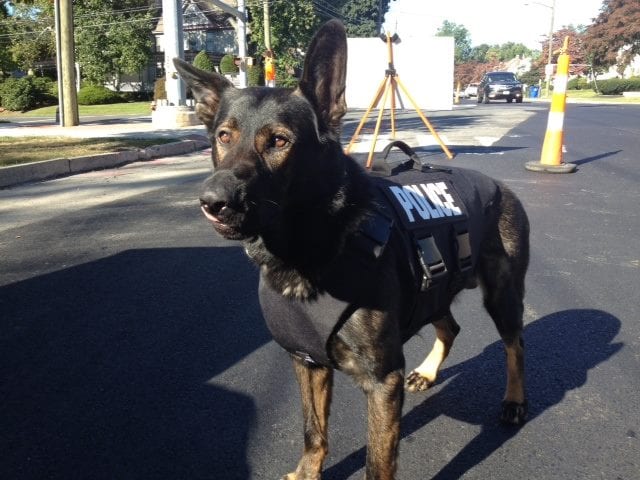 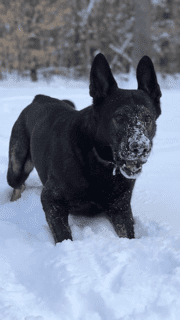 K-9 Axel in the snow. Courtesy of Nick Roman 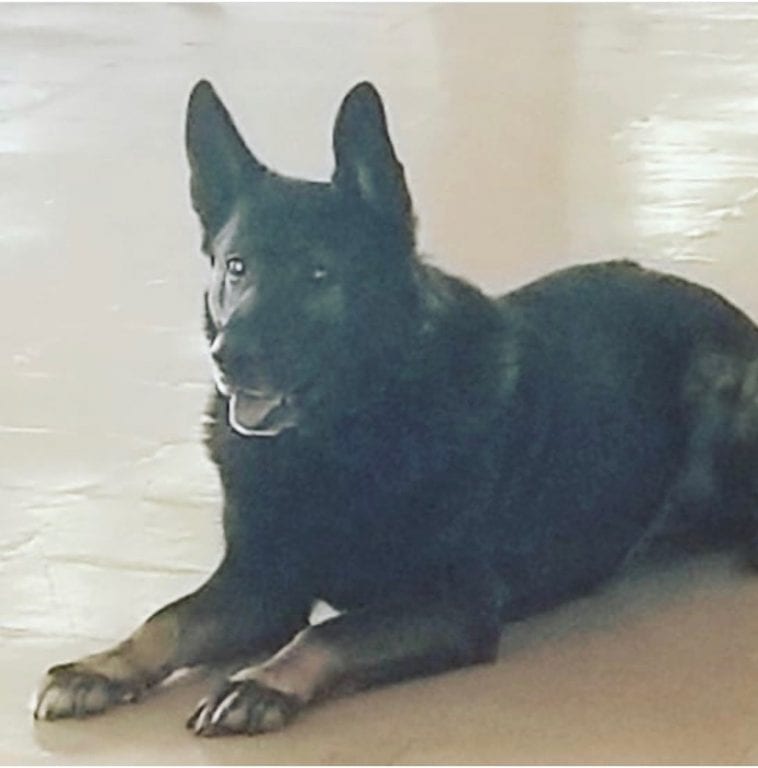 K-9 Axel at at a visit to St. Brigid School. Courtesy of Nick Roman. 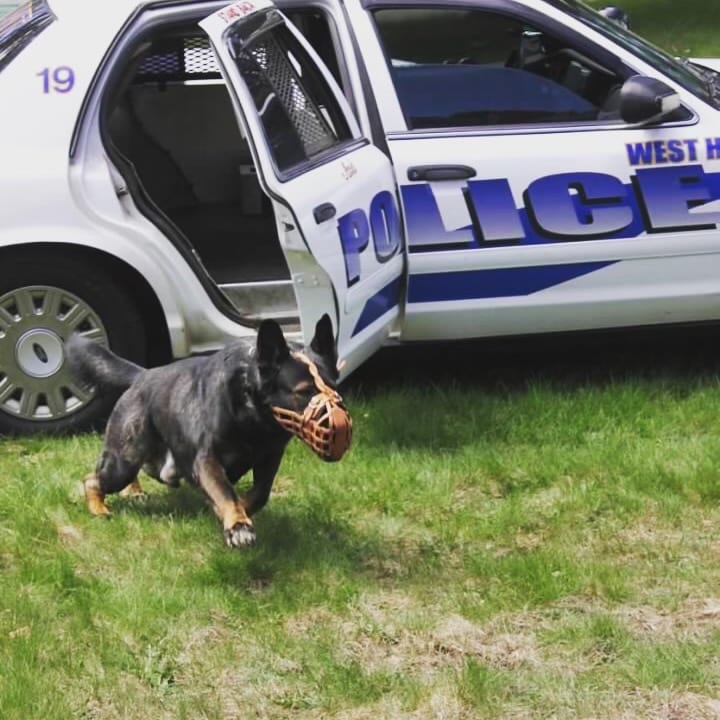 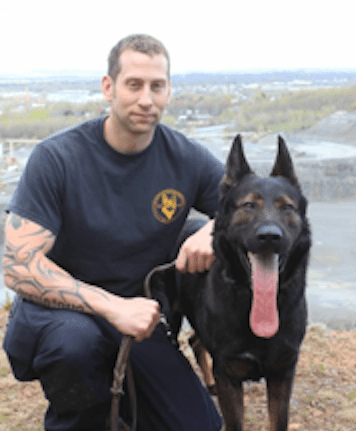 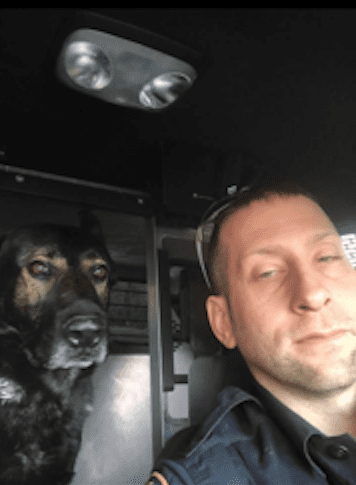 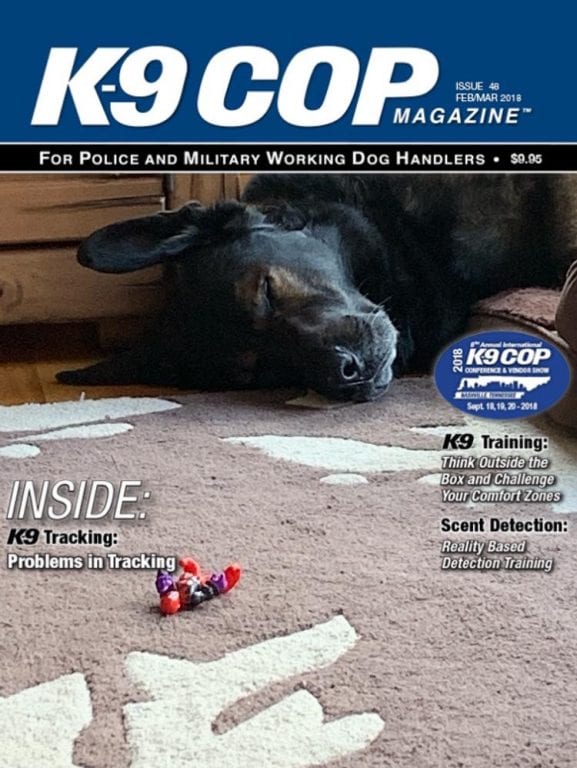 K-9 Axel was featured on the cover of K9 Cop magazine. Courtesy of Nick Roman.