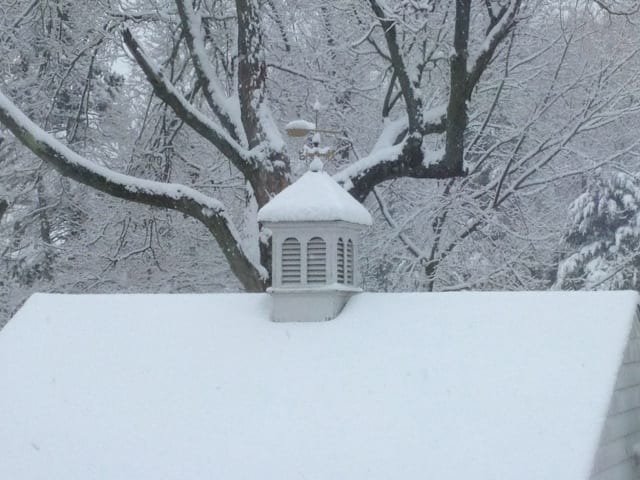 [Updated, 6:10 p.m.] A significant snowstorm is expected to impact West Hartford and the rest of the region beginning in the early hours of Thursday, Feb. 9, and police and public works have issued several alerts in advance of the storm.

The superintendent’s office has announced that all West Hartford Public Schools will be closed on Thursday, Feb. 9.

Trash and recycling will still be collected on Thursday, Feb. 9, but Director of Public Works John Phillips advised that Paine’s will begin collection earlier in the morning (prior to 6 a.m.) so that trucks can try to stay ahead of the heaviest snow accumulation.

In advance of a snowstorm that is expected to drop up to a foot of snow on West Hartford, the Department of Public works has issued a parking ban, and West Hartford Police are also warning residents that cars not heeding the ban will be ticketed and towed.

The parking ban will go into effect beginning at 10 p.m. Wednesday, Feb. 8, and will remain in effect until lifted by the Department of Public Works.

According to Director John Phillips, the parking ban is needed for the safety of all stakeholders. Plowing around parked cars is difficult and dangerous for plow operators, could also result in damage to the parked vehicle, and will not allow for the roadway to be completely cleared.

“We’re talking about a lot of snow, and we will be forced to tow cars early and often,” Phillips said. The West Hartford Police Department will be assisting Public Works with compliance, towing, and ticketing.

The West Hartford Police Department has also issued notice of the ban through its Everbridge emergency reporting system.

The police department’s “OMIT” online overnight parking system has been disabled and will remain inactive during the parking ban.

Phillips said that town-owned municipal lots will be available for parking during the ban. “Cars must be parked in a designated spot and between the lines,” stated a release from Public Works.

All cars must be removed from municipal lots by 12 a.m. Friday or risk towing. Cars must be moved in order for the lots to be cleared before school opens on Friday, Feb. 10.

Phillips said that residents can also park in town-owned garages, but subject to “applicable fees.” There is no deadline to exit the garages.

Public Works subscribes to “Weatherworks” for forecasting, and according to that service the snow is expected to begin between 3 and 6 a.m. Thursday. According to the Weatherworks forecast for West Hartford: “The heaviest snow will fall during mid to late morning and into the early afternoon. Snowfall rates will reach 2″ per hour at times, with thunder possible as well. However, this is a fast moving system that will quickly exit the state by the late afternoon and evening. Northerly winds will become quite gusty at times during the afternoon, which could cause some blowing and drifting snow.”

The heaviest snow is expected to fall between 7 a.m. and noon on Thursday, with a total snowfall estimated at 7-11 inches.

Please note the requirements for snow removal, as spelled out in Town Ordinance 115-24, which states: “Removal of snow and ice from premises where there is an established sidewalk is required by owners or occupants within 12 hours after a storm ends or within 12 hours after sunrise, whichever is later. The whole walk must be cleared, including curb cuts, handicapped ramps, and bus stop pads, etc.”

The following additional information about snow removal also appears on the town’s website:

“Heavily used sidewalks near schools and public buildings, and the commercial areas are particularly important. Snow throwing or pushing snow into the street from a private property or business is prohibited. This practice is dangerous and impedes the Town’s snow removal efforts.

“It is important for property owners to consider people with disabilities or individuals who may use mobility devices to navigate town sidewalks and pedestrian routes as they are clearing snow and ice. Ensure sidewalks and curb ramps at intersections/street crossings provide enough clear width to traverse. Snow should also be entirely removed from accessible/handicap parking spaces and their adjacent access aisle. Snow must not be placed in accessible parking spaces or access aisles.

Snow clearing violations can be reported to the West Hartford Police Department at 860-523-5203.

Violators can be subject to a fine of $79 per day, plus the cost of clearing the sidewalk.