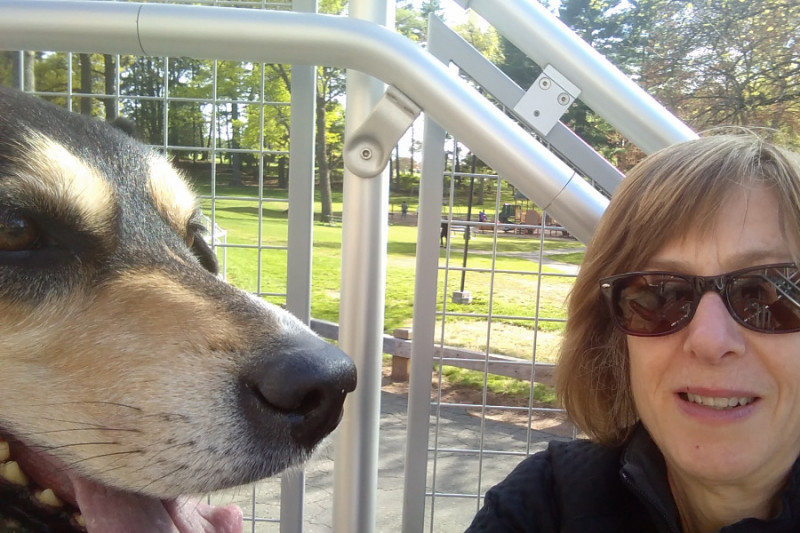 Rosemary DaCunha, pictured with her dog, Delia, will be doing a 'Park to Park' Walk on June 17. Courtesy photo

Rosemary DaCunha, a West Hartford resident who is the treasurer of Friends of Fernridge Park, is hoping her inaugural ‘Park to Park’ walk will raise awareness as well as funds for the town’s parks.

Rosemary DaCunha plans to take a very long walk on Saturday – but it’s a walk with a purpose.

DaCunha said that she and her dog, an Australian Shepherd mix named Delia, take daily walks for exercise but the approximately 15.2-mile walk she will take on June 17 is for more than exercise.

DaCunha will be walking to raise money and awareness for West Hartford’s parks.

“I walk Delia everywhere,” she said, typically with the goal of seeing as many different parts of West Hartford as possible. “I think we’ve covered 06107,” she said, referring to one of the town’s zip codes.

West Hartford is such a walkable community, and there are so many interesting things to see around town, she said. Walking is a great way to really notice things like the Little Free Libraries, or what Deb Cohen does with The Front Door Project when she walks through town looking for and photographing beautiful or interesting front doors.

As the weather warmed up this spring, she got the idea to combine her zest for improving Fernridge and the town’s other parks with her love of walking – and the idea for the Park to Park Walk was born.

DaCunha has mapped out a course that begins and ends at her home. The 15.2 mile route should take most of the day, and the plan is to begin at 5:30 a.m. and finish at Fernridge at 4:30 p.m. She said she will delay the walk until June 24 if the weather is really bad (extreme heat, or predicted extreme storms or tornados), but said she will still undertake the walk in light rain.

That $10,000 is needed to make a major dent and kickstart the fundraising for the future vision for Fernridge Park, an estimated $100,000 project that will include improvement to the paths as well as construction of a promenade around the pool house as a focus for the park. The plan was designed by UConn professor Peter Miniutti and some of the graduate students in his landscape design program, and was based on the vision the Friends of Fernridge Park had outlined.

“Our town is so fortunate to have residents like Rosemary. She has a vision and she follows through on it,” said Director of Leisure and Social Services Helen Rubino-Turco.

DaCunha said she will bring Delia along for some of the walk, but not the entire 15.2 miles. Her neighbor, Wendy Smith, has volunteered to walk part of the route, and other friends have also said they will join in.

“I don’t have an entourage coming with me, but having some company will be great,” DaCunha said. She would love to have people meet her as she arrives in each park as well.

“She’s very committed to Fernridge, but Rosemary is doing this also to awaken interest in all of our parks” Rubino-Turco said.

DaCunha hopes that this will be the first of many park to park walks in West Hartford, or maybe even that it will launch “parkruns,” something that is very popular in Europe.

“Why not be part of an inaugural event that we want to become an annual event?” DaCunha said.

Rubino-Turco hopes that the Park to Park Walk will encourage residents to support other town parks, or perhaps even lead to formation of an overall “Friends of West Hartford Parks” organization. The town’s budget needs to support all of the parks, but only so many improvements can be done at any one time.

Fernridge has had recent upgrades made by the town, Beachland has a new pool, and Wolcott is next for some upgrades, Rubino-Turco said, with based on designs Miniutti created. He was engaged by the town after they saw what was designed for Fernridge – a topnotch plan for a reasonable price that’s at the same time supporting a program of the state’s flagship university.

But as has been done for Fernridge, residents may want to go above and beyond what the town can afford to do for each park.

“If people raise money, more can be done. This is what an engaged West Hartford is all about,” Rubino-Turco said. Residents have found a way and galvanized others, she said, citing the success of the Foundation for West Hartford Public Schools and the Field of Dreams, as well as what Friends of Fernridge Park has already done to reinvest in the neighborhood.

“They’ve cared passionately, formed a plan, and gone beyond – with a goal in mind,” Rubino-Turco said.