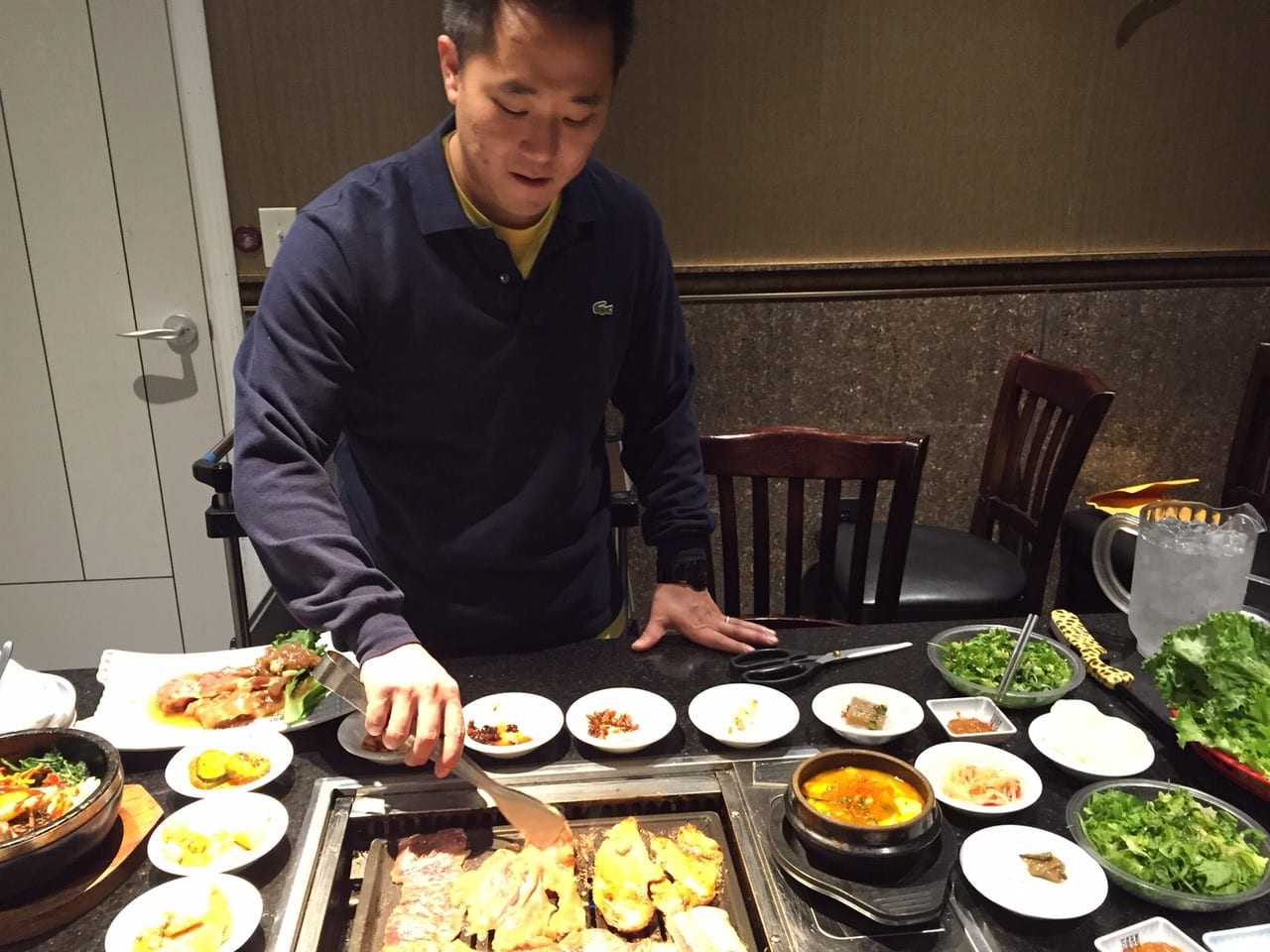 Mark Moon, who has taken over Seoul BBQ & Sushi from his parents, demonstrates how to grill the restaurant's authentic Korean BBQ at the table. Photo credit: Ronni Newton

West Hartford resident Mark Moon is now the principal of Seoul BBQ & Sushi, which his parents opened several years ago. 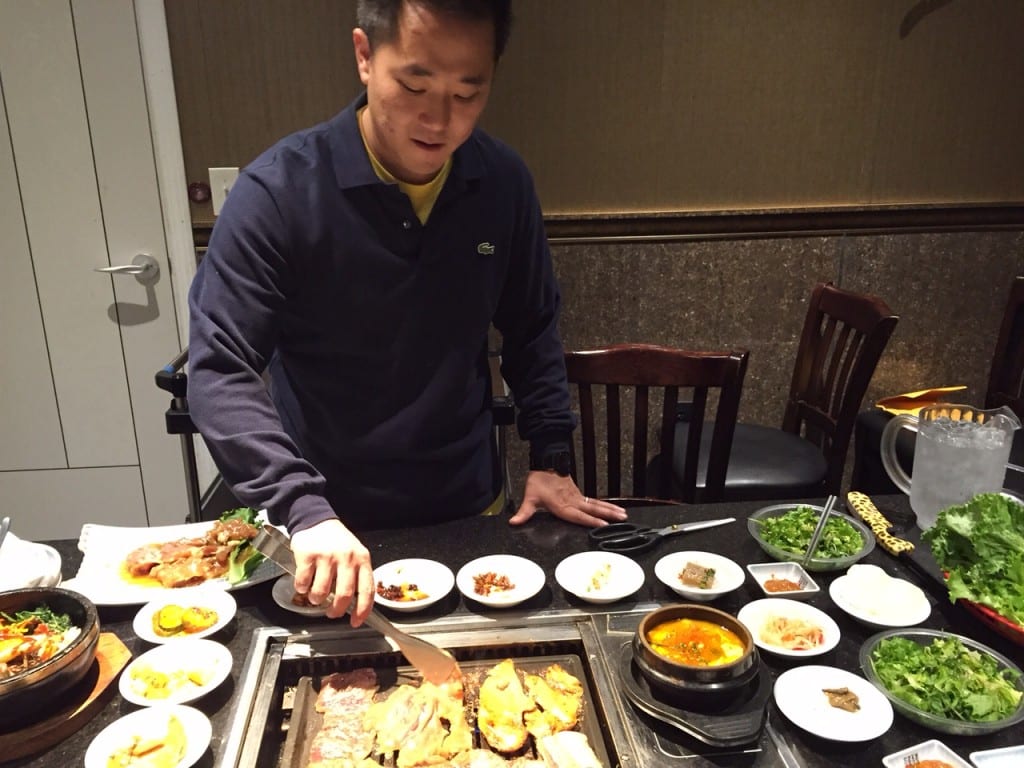 Mark Moon, who has taken over Seoul BBQ & Sushi from his parents, demonstrates how to grill the restaurant’s authentic Korean BBQ at the table. Photo credit: Ronni Newton

Mark Moon has given up his law practice, moved to West Hartford, and dedicated himself to bringing a unique and authentic Korean barbecue experience to the area through his family business.

Moon’s parents, natives of Daegu, Korea, have lived in the U.S. since the 1970s, operating a variety of retail establishments. They opened Seoul BBQ & Sushi in December 2013. Moon took over in December 2015.

“I want this to be a place where people come to eat and be happy with their friends and family,” he said. His goal is also encouraging people to try new things and appreciate authentic Korean food.

New York and Los Angeles have already welcomed Korean cuisine with open arms, Moon said, and the restaurants are a dime a dozen in those large cities. There are a few Korean restaurants in the West Hartford area, but he believes that having a focus on Korean barbecue is a differentiator.

Barbecuing “in-table” is a highlight of the experience at Seoul BBQ, Moon said. It’s different from hibachi, he said, much more flavorful. The patrons do the cooking themselves, with thinly-sliced meat that cook quickly at the table and are ready in no more than 5-10 minutes.

“Koreans are into sharing, and with the barbecue orders you get ‘Banchan’ – little cold side dishes,” he said. Those dishes, which include kimchi, marinated vegetables, and tempura, are an integral part of the meal.

“Everything is meant for sharing. In Korea people even eat out of the same bowl. Here that’s seen as weird,” said Moon.

Short ribs are a focal point of Korean cuisine. Moon highly recommends the “Galbi” – beef short ribs marinated with the house special soy sauce. “I hunt down the fried rice people and try to get them to order that because it’s the best thing,” he said.

The barbecue is traditionally turned into a lettuce wrap, with radish, sauce, and salad greens layered with the grilled meat.

For those who don’t choose the barbecue experience, another specialty Moon recommends is the “Soon-tofu” – spicy tofu stew simmered in a clay pot with a choice of beef, seafood, and/or vegetables.

The “Dolsut Bibimbap” – steamed rice in a sizzling clay pot topped with beef and assorted stir fried vegetables and fried egg, served with red chili sauce – is the most popular item on the menu, Moon said.

The spicy seafood noodle soup (“Jjamppong”) is also popular. There are also options available for those who are vegetarians or eat a gluten-free diet.

The large selection of Japanese food on the menu helps get people through the door, Moon said, but the chefs are Korean and that’s really the restaurant’s specialty. There are some dishes that combine the cuisines, including the chef’s special chicken cutlets.

What the restaurant doesn’t serve is traditional dessert, but they do serve “Sikhye,” a Korean sweet rice tea-like drink.

Seoul BBQ & Sushi is family-friendly and has private rooms that can be customized for parties of various sizes.

When Moon graduated from the University of Michigan and Western New England School of Law, he intended to have a career in sports management. “For me it was more about helping people, never about chasing the buck,” he said.

As an attorney, Moon said he went home angry every day.

He’s now happy that he has quit practicing law, moved to West Hartford, and is running the family business.

Seoul BBQ & Sushi is technically located in New Britain (593 Hartford Rd.), in the same shopping center as Connecticut Beverage Mart – but it’s an area near Westfarms where West Hartford, Newington, Farmington, and New Britain all meet and no one is ever sure what’s in which town.

Moon said if he had to outline a mission, it would be: “for every person to leave happy and full, and wanting to come back. Anything less is our fault.” 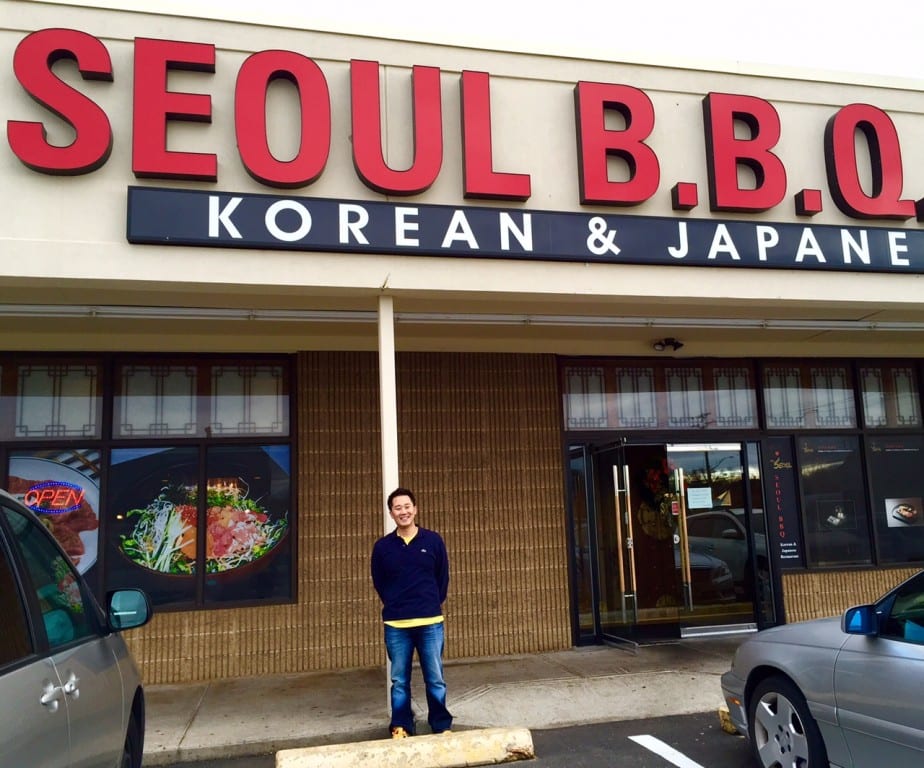 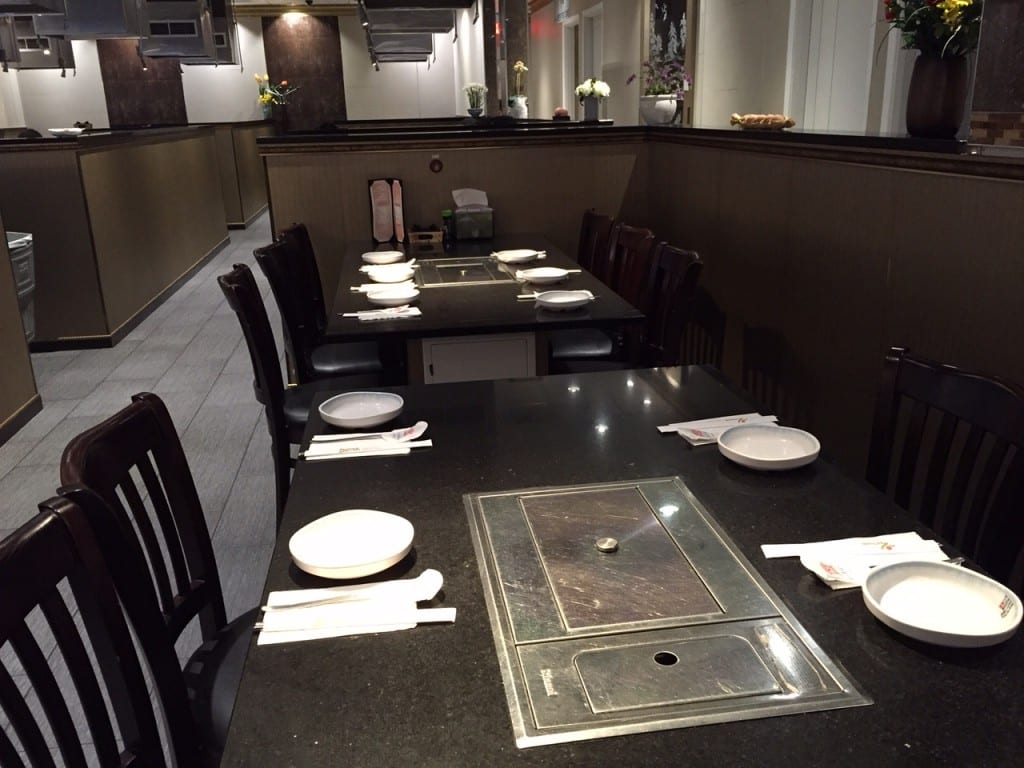 Tabletop grills are a feature of many of the tables at Seoul BBQ & Sushi. Photo credit: Ronni Newton 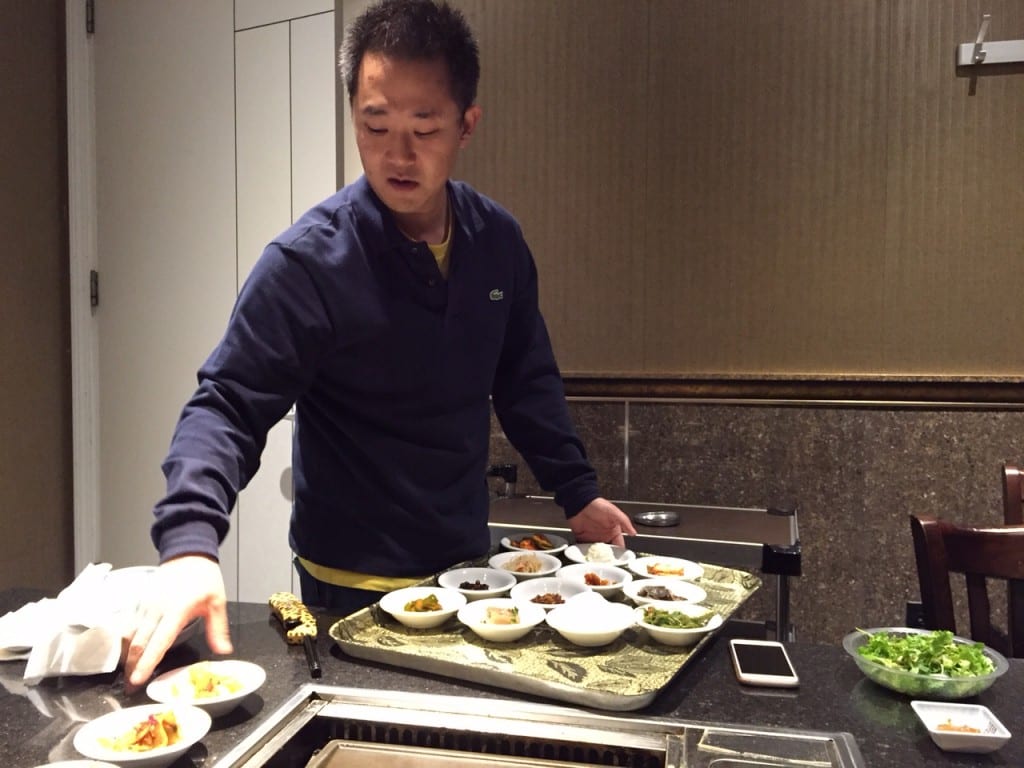 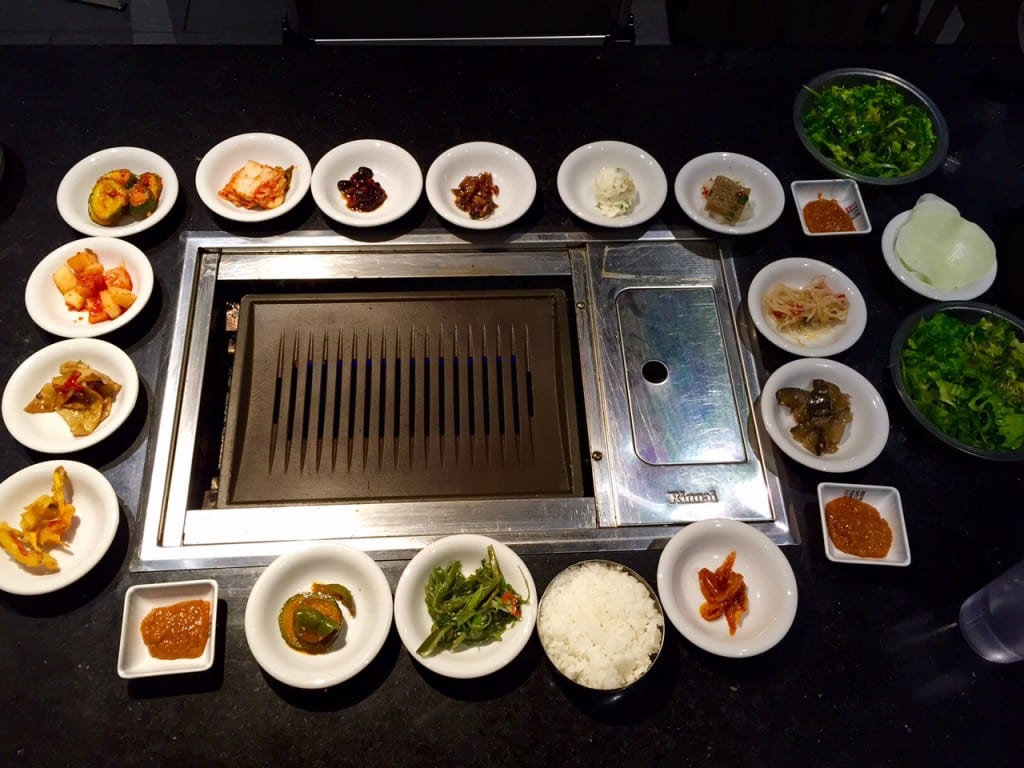 A variety of side dishes, including kimchi, marinated vegetables and tempura, accompany the BBQ. Photo credit: Ronni Newton 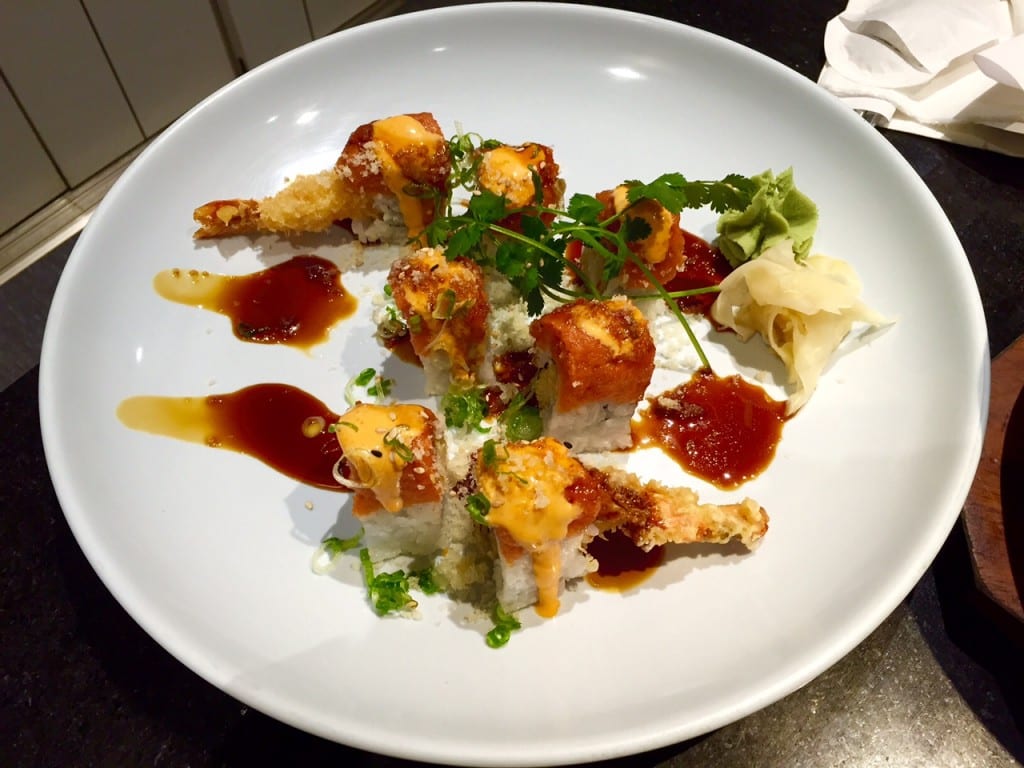 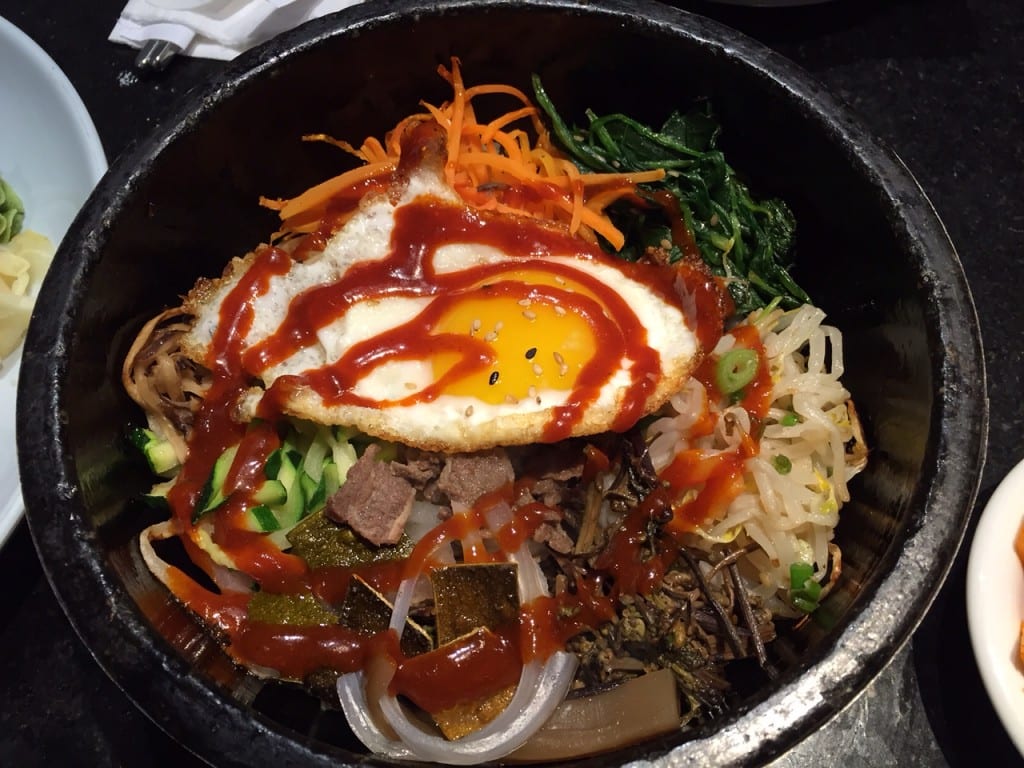