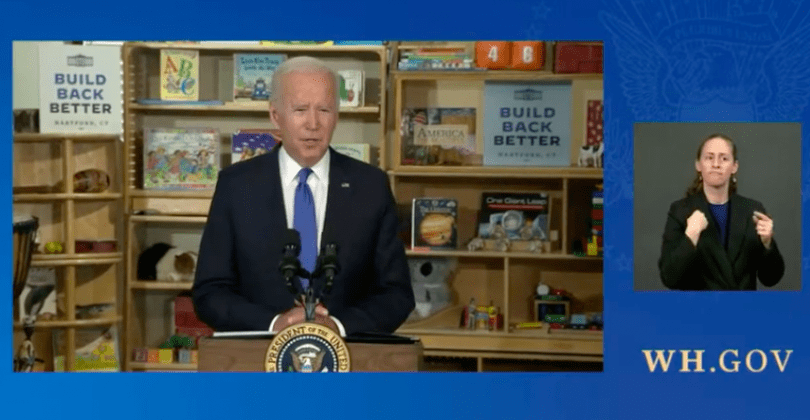 President Joe Biden visited a child care center in Hartford on Friday, followed by a visit to the UConn Storrs campus for dedication of the Dodd Center for Human Rights. 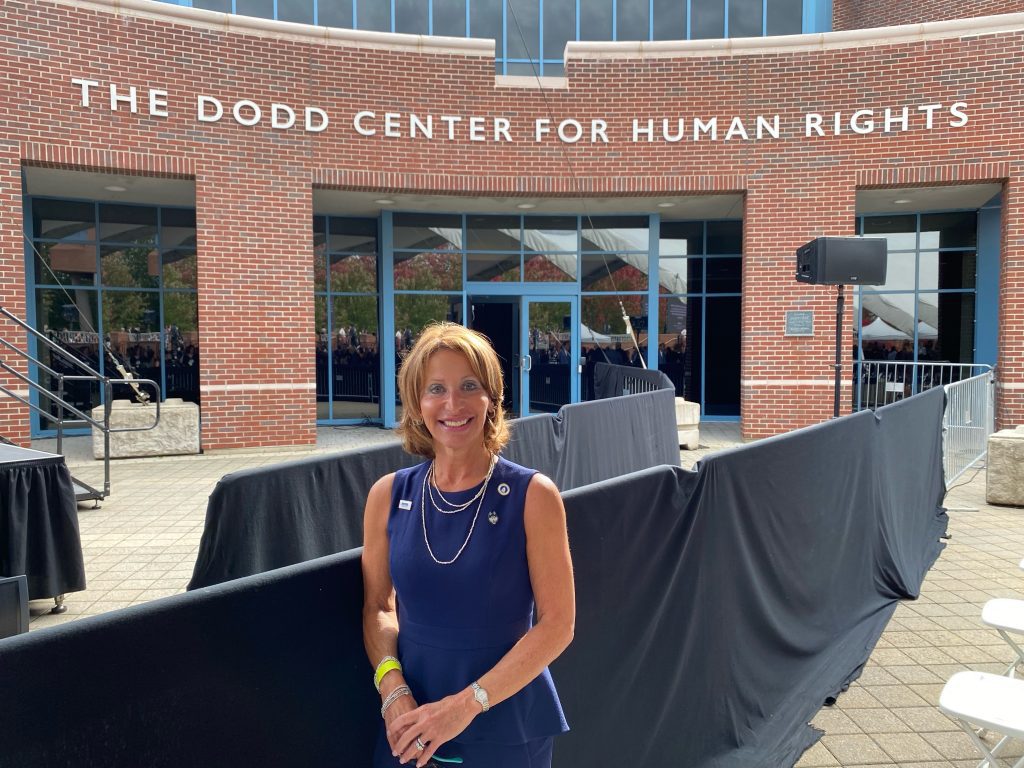 President Joe Biden on Friday made his second trip to Connecticut since being elected, and while he didn’t visit West Hartford, some residents had the opportunity to visit with him, or to participate in the two main events connected with his visit.

West Hartford resident Beth Bye is the commissioner of the state’s Office of Early Childhood, and said when she was asked for some information about how the state had effectively made use of the American Rescue Plan Act funds to support child care, she expected a possible visit from a senior White House official, she didn’t expect that person to be the president.

About a week and a half ago, Bye told We-Ha.com, she was asked to send federal officials the names of two child care centers – and it wasn’t until a few days before the visit that she learned President Joe Biden would actually come to one of those centers.

“It was really cool,” Bye said.

“I do think it’s not an accident that he came to Connecticut,” Bye said. Connecticut was one of three states to allocate the American Rescue Plan Act funds to child care centers right away, and to date one of only 19 states that has done so.

Bye said on Wednesday she spent about an hour on the phone with the White House explaining how the funds were used in the state. “We allocated $300 million to support families, to lower the cost or provide free child care,” she said. That not only assisted families, but also the providers. 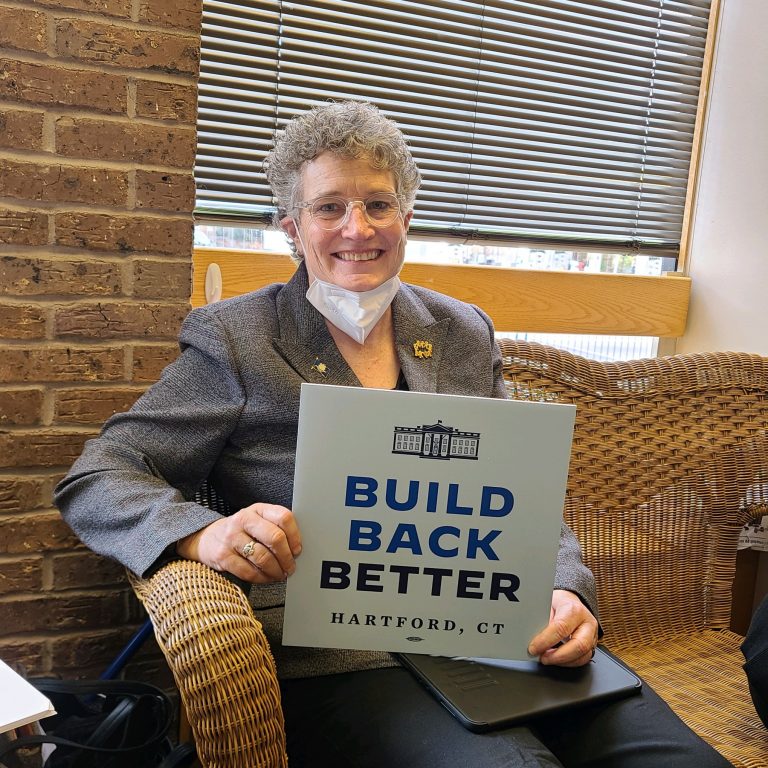 Without intervention, the state was projected to lose more than 40,000 child care spaces, Bye said, but with the federal funds the centers were able to remain open, and employees – who are in short supply – have been working so hard to keep going.

Bye said she had no idea what to expect when Biden arrived Friday around noon. She said she and child care providers Stacie Harris-Byrdsong and Queen Freelove walked into a waiting area at the Capital Child Development Center. “There were all these Secret Service guys, and a play kitchen.” 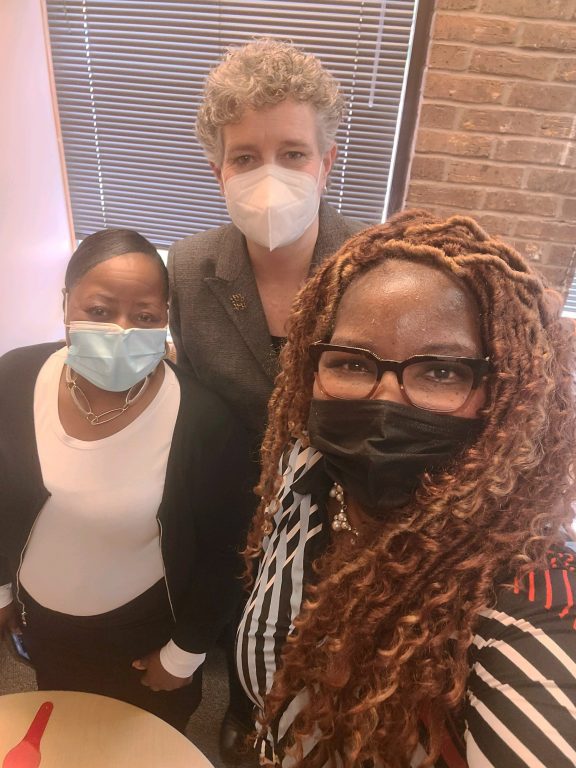 Child care providers Queen Freelove (left) and Stacie Harris-Byrdsong (right) with OEC Commissioner Beth Bye. The three had a chance to meet with President Joe Biden before his speech at the Capitol Child Development Center on Friday. Courtesy photo

Bye said they sat on the pint-sized couches waiting for the president, and then headed into the Koala Room where the trio had about 10 minutes to chat before the official speech. “I wasn’t anticipating a private audience,” she said.

“He said he had heard about our work in Connecticut,” Bye said of her conversation with Biden. She said she told him the stabilization funds made a big different, but the “Build Back Better” legislation is also critically needed.

Bye said about 30 people attended what Bye said was a “really moving” speech about “Build Back Better.”

“Investment in human infrastructure is just as important,” she said. The U.S. is really behind other countries in the commitment to child care, she said, and “investments in people really matter. … Preschool and child care really need to be part of our educational system.”

A closely divided Congress is currently haggling over Biden’s $3.5 trillion Build Back Better proposal, which includes among a host of social spending programs, new funding to support child care and pre-K education.

“The average annual cost of a childcare center for a toddler in Hartford is $16,000,” White House Press Secretary Jen Psaki said during a Thursday press briefing. “And a typical four-person household in the state would need to spend more than 26 percent of their income for childcare for two young children each year.”

The president was “just so warm,” Bye said, and Freelove told her she felt so validated as a family child care provider, that he took the time to speak with the people actually doing the work. 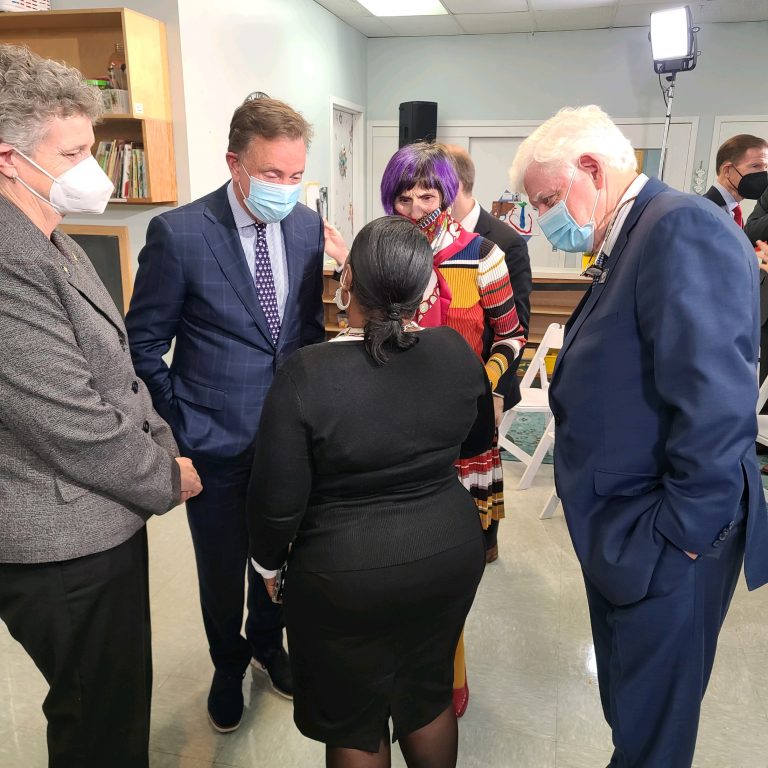 “I was really impressed with his kindness and empathy, and willingness to talk to people on the ground. … This was not about the hoopla,” Bye said. “Literally, the speech was in a preschool classroom.”

Bye said she was please that Biden also gave kudos to Gov. Ned Lamont, who has worked so hard to keep the state safe and operational throughout the pandemic. “There are not that many rewards,” she said. 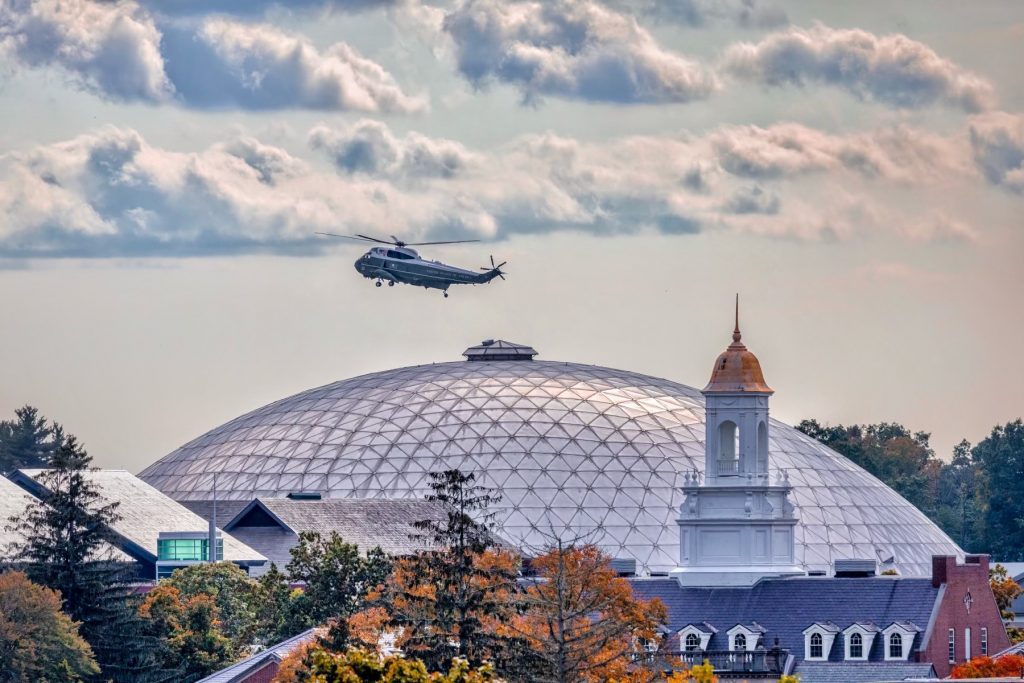 Following his remarks at the Capitol Child Development Center, the president traveled to the University of Connecticut’s Storrs campus to attend a dedication at the Dodd Center for Human Rights.

The center was named for former Sen. Thomas J. Dodd, who served as a prosecutor during the Nuremberg trials. On Friday, it was rededicated to include his son, former Connecticut Sen. Chris Dodd. Biden and the younger Dodd served together for nearly three decades in the U.S. Senate and remain close friends. 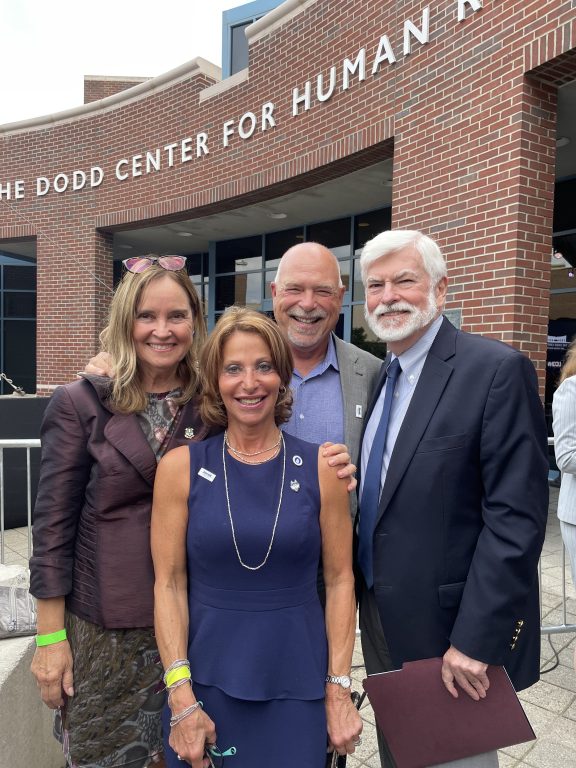 “It was an honor to have President Biden on the UConn Campus for the Dodd Center for Human Rights dedication,” said West Hartford Mayor Shari Cantor, a University of Connecticut trustee who attended the event. “It demonstrated the importance of this institution and its work on human rights.” 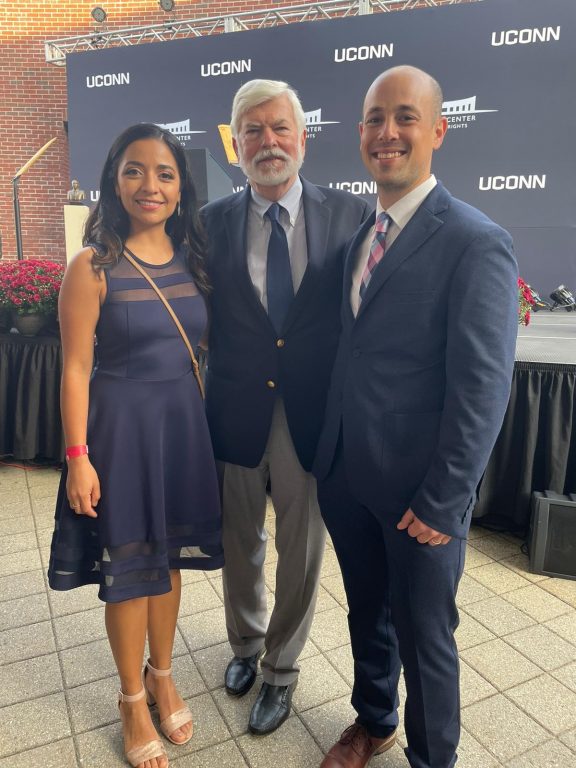 One student, West Hartford resident Nadia Aguilar-Steinberg, had a major role in Friday’s ceremony. Aguilar-Steinberg, who has a master’s from UConn, is currently a doctoral candidate in Fine Arts with a concentration in opera at UConn, and was chosen to sing the National Anthem.

Aguilar-Steinberg, who said she never thought she would have a chance to meet a U.S. president, said she was both excited and nervous before the performance. “I was feeling excited because I knew a lot of people were going to be seeing this, and of course excited that the president was going to hear me. I was nervous because there was a lot of pressure to do well. It’s not like an opera where you get to redeem yourself over the course of the show. It’s one song, a challenging one at that. Also, the most important song and performance of my entire life.”

In advance of the performance she practiced by singing the National Anthem to herself, several times a day. She did breathing exercises to combat nervousness.

Backstage, she said, the president was making jokes, and was very nice. “[He was] very humble and personable. I didn’t get a feeling from him like he was superior. Very kind and gentle.”

She had a chance to shake Biden’s hand and speak with him after she performed.

“He said that I did a great job and I thanked him for the praise. It was a short interaction, but I was able to shake his hand, and get a few pictures with him, too.” 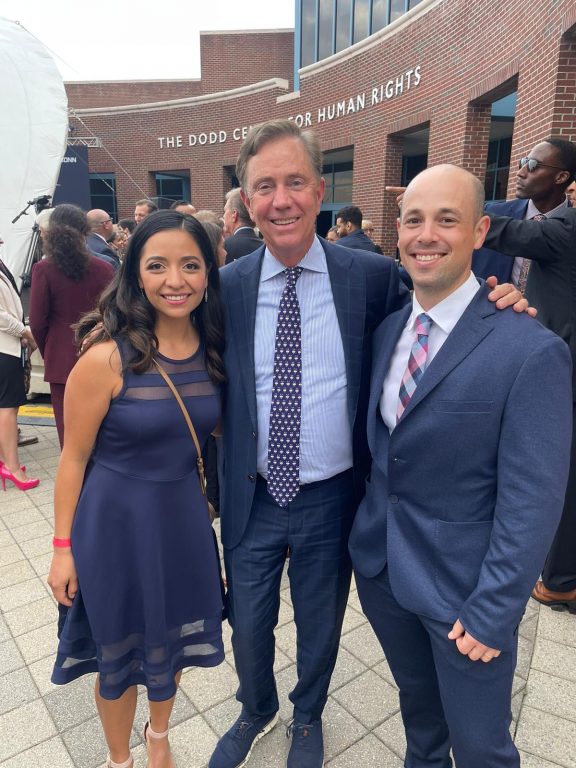 West Hartford resident Nadia Aguilar-Steinberg and her husband, David Steinberg (right) with Gov. Ned Lamont at the dedication of the Dodd Center for Human Rights at UConn. Courtesy photo

“One of the best points of the event was when we were talking with Gov. Ned Lamont and him and his staff asked Nadia to sing the National Anthem the next time they needed a singer,” said her husband, David Steinberg, who attended the event but didn’t have the same access to the president or other dignitaries as his wife did. 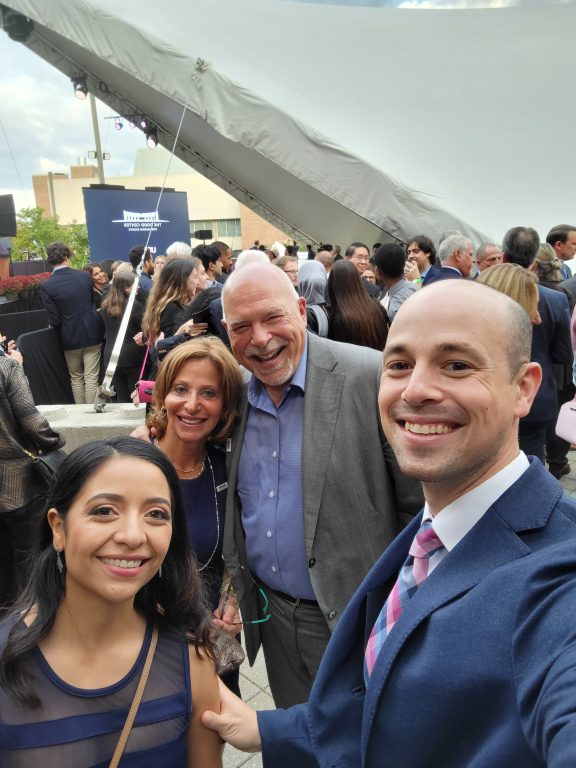 West Hartford residents Nadia Aguilar-Steinberg and David Steinberg (front) with Mayor Shari Cantor and Michael Cantor at the dedication of the Dodd Center for Human Rights at UConn. Courtesy photo

“The UConn Human Rights Institute is one of the largest undergraduate and graduate programs at a public university in the United States, and plays an important role in educating our future leaders and champions for human rights in the United States and around the world,” Cantor said. 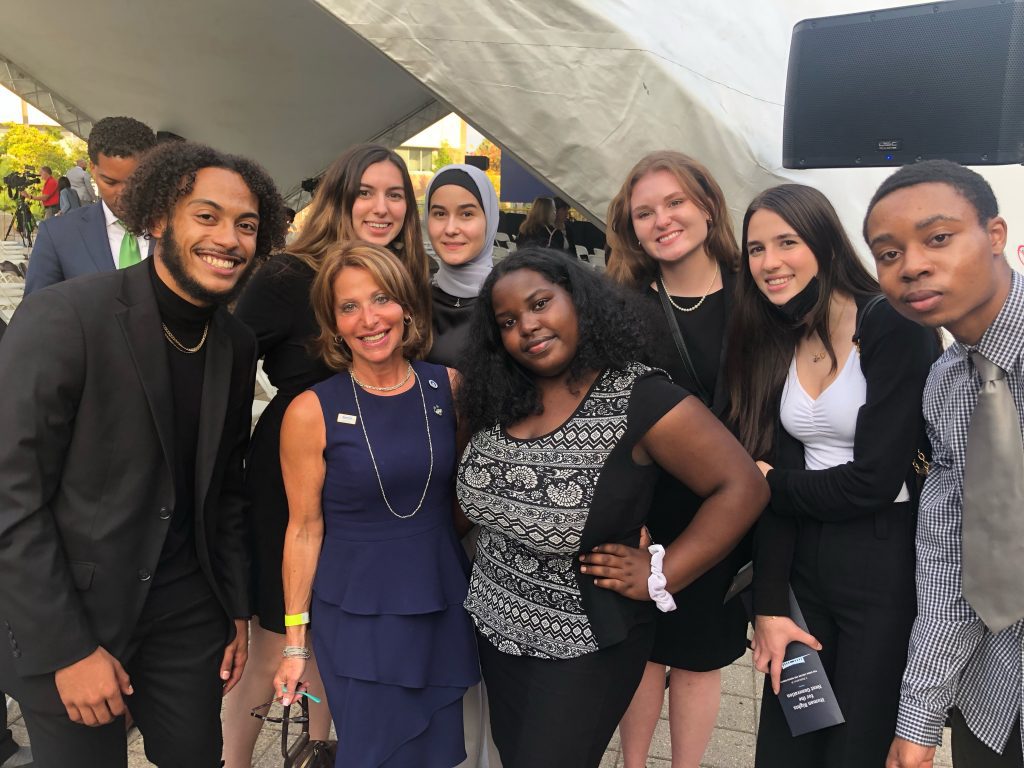 “This day is significant and meaningful, marking the 75th anniversary since the Nuremberg Tribunal decision, which brought the facts of the horrors of the Holocaust forward for the whole world to see. We need to understand our history, even when it is ugly and painful, so we can move forward by learning from it and changing so we don’t repeat the mistakes of the past.” 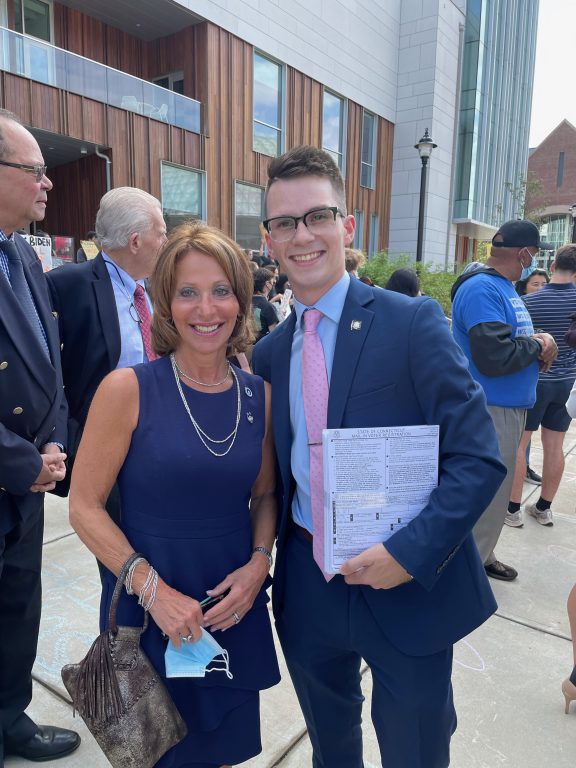 The YouTube videos below include the president’s entire speech at the Capitol Child Development Center, as well as the dedication of the Dodd Center for Human Rights. 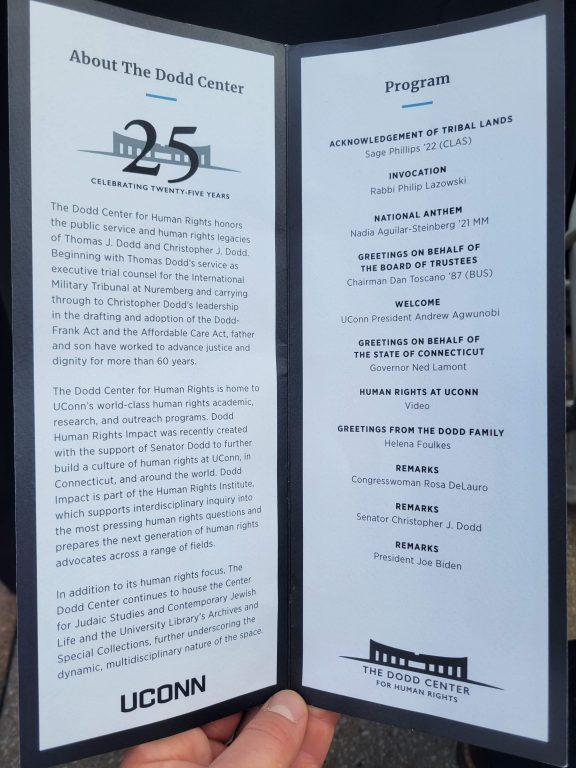 Program from the dedication of the Dodd Center for Human Rights at UConn. Photo credit: David Steinberg

A portion of a report by Hugh McQuaid for CTNewsJunkie.com was included in this article.