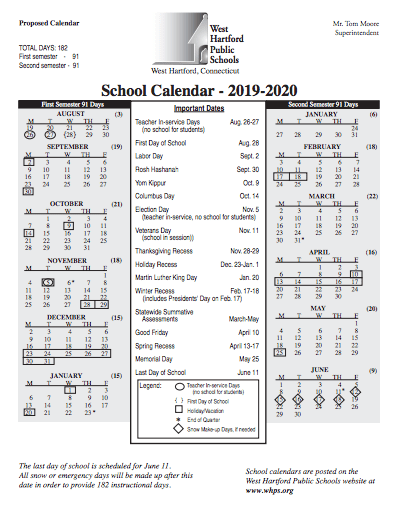 Several residents, including students, spoke at the West Hartford Board of Education meeting on Feb. 21, requesting the ‘Columbus Day’ on the calendar be replaced with ‘Indigenous Peoples Day.’

The West Hartford Public Schools calendar has not led to contentious discussion among Board of Education members ever since the district had to adopt the CREC uniform calendar a few years ago, leaving limited variability to the first day of school and vacation schedules, but now a group of residents has requested a change to the name of a holiday on the calendar.

Five residents – two of whom were students – addressed the Board during the public communication session Wednesday night, and requested changing Columbus Day to Indigenous Peoples Day.

Resident Jane Lehman told the Board that the mission of the K-12 social studies curriculum is to prepare students to become informed participants in the global community. “I feel very strongly that perpetuating the same old myths doesn’t support that. Honor the colonized, not the colonizer,” she said.

Several Board members had strong – and varying – opinions on the issue, and engaged in rather heated discussion when the calendar reading came up on the meeting agenda.

Mark Zydanowicz, one of two Republicans on the Board, noted that only five people spoke about the issue, and it was “not an outcry like we heard with the logo issue.”

He said that the Board “had an opportunity to honor those Native Americans by honoring them with an appropriate logo,” referring to a discussion that took place in February 2015, when more than 250 people attended a forum to express their strong and varied opinions regarding the Conard and Hall Chieftain and Warrior names, logos, and the Conard mascot. The Board of Education voted in March 2015 to allow the Chieftain and Warrior names to be retained, but to require new logos that eliminated Native American imagery.

“Why don’t we call it ‘exploration day,'” Zydanowicz said, adding that Columbus’ intent was discovery even though it didn’t turn out that way.

“We don’t have an outcry from the entire town,” Zydanowicz said. “I think we need to have more discussion, more due diligence … This happens to be a Federal holiday.” He said the history piece should be taught in the classroom.

Board Chair Cheryl Greenberg, a Democrat, responded that the number of people who bring forward an idea should not matter. “It’s not exploration day it’s a celebration of a European who comes over and says he discovered a place that already existed,” she said. It’s important to “be sensitive to fact that this is a holiday to celebrate a particular triumph and we have to remember that it comes at a cost.”

Greenberg told We-Ha.com on Thursday that the issue “did not come out of the woodwork,” and a group of parents and some teachers had first approached her in the fall to discuss removing the designation of Columbus Day on the West Hartford Public Schools calendar and also asking about curricular changes.

While the Board doesn’t have the authority to change the curriculum, certain changes can be made to the calendar. Greenberg said that Superintendent Tom Moore said the discussion should take place at the time of the first calendar reading.

“I think it’s a question of accuracy and symbolism … symbolism is important,” Greenberg said at the Board meeting. She said that changing the name would send “the signal that we want a broader discussion” and that the history of the discovery of America needs to be taught in a different context.

“Sometimes the Board does need to lead,” Democrat Dave Pauluk said. “I think it’s a good idea if it’s only affecting the name … I support the suggestion.”

Republican Board member Rob Levine said there has not been an outpouring and he wanted input from more than just the five people who spoke at the beginning of the meeting. He requested a sense of the town’s opinion, perhaps a petition.

The Board’s student representatives, Grace Andrews from Conard and Maddy Pliskin from Hall, took the initiative the very next day.

“West Hartford is commended often for the education we give to our children. We teach our students to be informed, engaged, moral, and to consider all perspectives. I feel West Hartford Public Schools must honor our indigenous people and advocate for this positive change in our community,” said Andrews.

Andrews hopes that residents will sign the petition and demonstrate to the Board that the change should be made. “It is never too late to do the right thing. West Hartford needs to be a leader in this movement to celebrate the true face of America, rather than an outdated European perspective.”

Andrews added that as a student in West Hartford she has been taught “the ‘truth’ about Columbus and the Indigenous. This is the exact reason why our town must make this change; we need to represent what we teach. Let’s be advocates for truth.”

The petition was started on change.org on Feb. 22, the day after the Board meeting, and as of Feb. 25 had 490 signatures.

Pliskin shared the petition on the “Neighbors and Friends in West Hartford” Facebook page on Thursday, a group that has nearly 13,000 members. There were more than 150 reactions to the post, as well as 56 comments representing a variety of opinions. She said the petition will be presented to the Board at its next meeting.

Moore said the Board does not need to make the decision about changing the name of the holiday until it votes on the calendar at its March 20 meeting. He will provide two different calendar options to consider – one with Columbus Day and one with Indigenous Peoples Day.

Although Columbus Day, originally celebrated on Oct. 12, was a national holiday dating back to 1934, according to a report by the U.S. Senate, Columbus Day was established as a Federal holiday along with the passage of the “Monday Holiday Law of 1968,” when observances of Washington’s Birthday, Memorial Day, and Veterans Day shifted to Mondays.  (The shift actually took place in 1971, and Veterans Day shifted back to being observed on Nov. 11 in 1975.) “By commemorating Christopher Columbus’s remarkable voyage, the nation honored the courage and determination of generation after generation of immigrants seeking freedom and opportunity in America,” a Senate document regarding the evolution and application of Federal holidays states. “Such a holiday would also provide ‘an annual reaffirmation by the American people of their faith in the future, a declaration of willingness to face with confidence the imponderables of unknown tomorrows,'” the report reads.

Time.com reported in Oct. 2017 that four states (Alaska, Minnesota, South Dakota, and Vermont), as well as 55 cities throughout the country have opted to celebrate either Native Americans Day or Indigenous Peoples Day in lieu of Columbus Day. “Indigenous Peoples’ Day recognizes Native Americans, who were the first inhabitants of the land that later became the United States of America. Advocates for the switch to Indigenous Peoples Day argue that Columbus did not ‘discover’ America in 1492 but instead began the colonization of it,” the Time.com story states, a colonization of the indigenous people that included mass genocide.

There is an “International Day of the World’s Indigenous Peoples,” established by the United Nations in 1994. It is celebrated each year on Aug. 9.

Anyone interested in expressing their opinions about this matter can contact individual Board of Education members or send an email to the entire Board. Contact information can be found here.