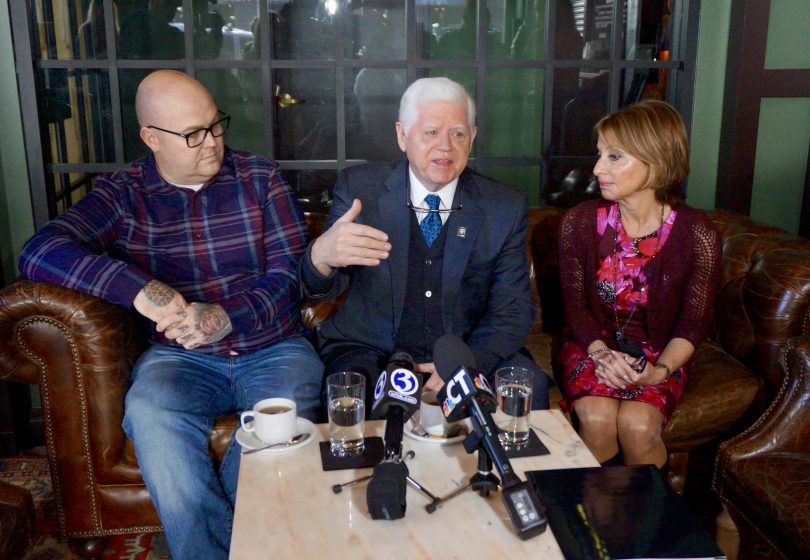 Restaurateur Tyler Anderson was recognized at a press conference Friday with U.S. Rep. John Larson and West Hartford Mayor Shari Cantor, and spoke about his meal plan for federal workers who were impacted by the government shutdown.

Just hours before the announcement Friday that President Donald Trump had agreed to a deal to end the federal government shutdown, at least for the next three weeks, Chef Tyler Anderson joined U.S. Rep. John Larson and West Hartford Mayor Shari Cantor at Porrón&Piña in Hartford to announce the plan launched in his three local restaurants to help impacted workers.

Anderson, a West Hartford resident and owner of The Cook and The Bear in West Hartford and Millwright’s in Simsbury, as well as Porrón&Piña in Hartford, launched a “pay us back when you get paid” plan on Jan. 22 to allow employees impacted by the shutdown to have a house account at any of the three restaurants.

“These workers help to keep us safe and secure. Many of them are still headed into work each day, but with no paycheck to show for it. This is one small way that folks in my industry can lessen the burden of going to work without pay,” said Anderson.

“It’s these incredible acts of kindness by fellow citizens, our banks that have stepped up in giving no interest loans, and now the basic food that you eat and need … that helps in moments like these,” Larson said, thanking Anderson.

An outspoken opponent of the need for wall to secure the country’s southern border, the shutdown was “just flat out wrong,” Larson said.

“There is no other parliamentary organization in the world that closes its government,” said Larson. “Only here in the United States have we done this.”

Cantor expressed her thanks to Larson for his push to reopen the government, as well as Anderson for stepping up to help.

“Tyler you have been a leader at every turn when it comes to humanity and giving back to the community. I want to thank you for that. You have really been so remarkable, been a great partner in so many nonprofit pushes,” said Cantor.

Cantor noted the presence of State Rep. Jillian Gilchrest at the press conference, and praised the work of our state legislators who passed a bipartisan measure Tuesday to allow towns to permit impacted workers to defer payment of their property taxes without penalty.

Cantor also noted that just hours after the state had passed the measure and it was signed into law by Gov. Ned Lamont, the West Hartford Town Council, by a vote of 8-1 passed a bipartisan resolution allowing impacted residents a tax deferment. Republican Town Council member Mary Fay, who voted in favor of it, also attended Friday’s press conference.

“We tried to do one little step in the cog of what we can do,” Cantor said. She urged everyone to “support restaurant owners like Tyler who are really are making a difference in lives that are so stressed by this situation.”

West Hartford resident Martha Parish attended the press conference. A 15-year veteran of the Federal Aviation Administration and union representative for the Professional Aviation Specialists, Parish was among the furloughed workers.

“The reasons I stayed in government are no longer there,” she said, noting that the feeling of job security had vanished. Parish said that her husband is employed, so that there was still income coming in while she was furloughed.

Earlier on Friday, the government shutdown had created a significant impact on air traffic at several major East Coast airports, including LaGuardia, as air traffic controllers who were not being paid had called in sick. “There are only so many aircraft that controllers can handle,” Parish said.

Flights at Bradley Airport were not directly impacted, but Parish said that there is already a shortage of air traffic controllers there.

The U.S. Senate and House both passed bills Friday ending the shutdown, and Friday evening it was signed by the president.

The legislation, which reopens the government through Feb. 15, does not have any money for Trump’s border wall. Negotiations on that issue are expected to continue.

“If we don’t get a fair deal from Congress, the government will either shut down on Feb. 15 again or I will use the powers afforded to me under the laws and the Constitution of the United States to address this emergency,” Trump said, referring to his potential use of executive power to fund the border wall as a matter of national security.

The government shutdown was the longest in history. It began on Dec. 22, 2018, and lasted for 35 days, with impacted workers missing two paychecks. Workers could receive back pay as soon as Wednesday.