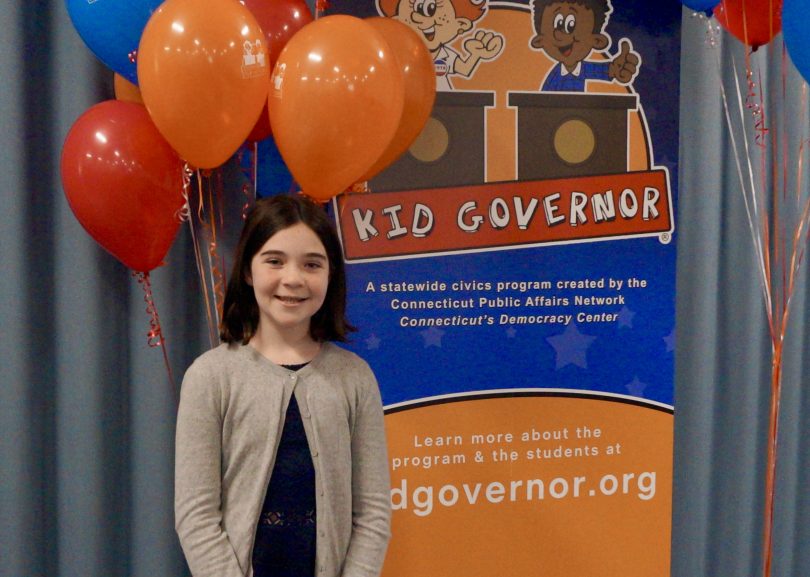 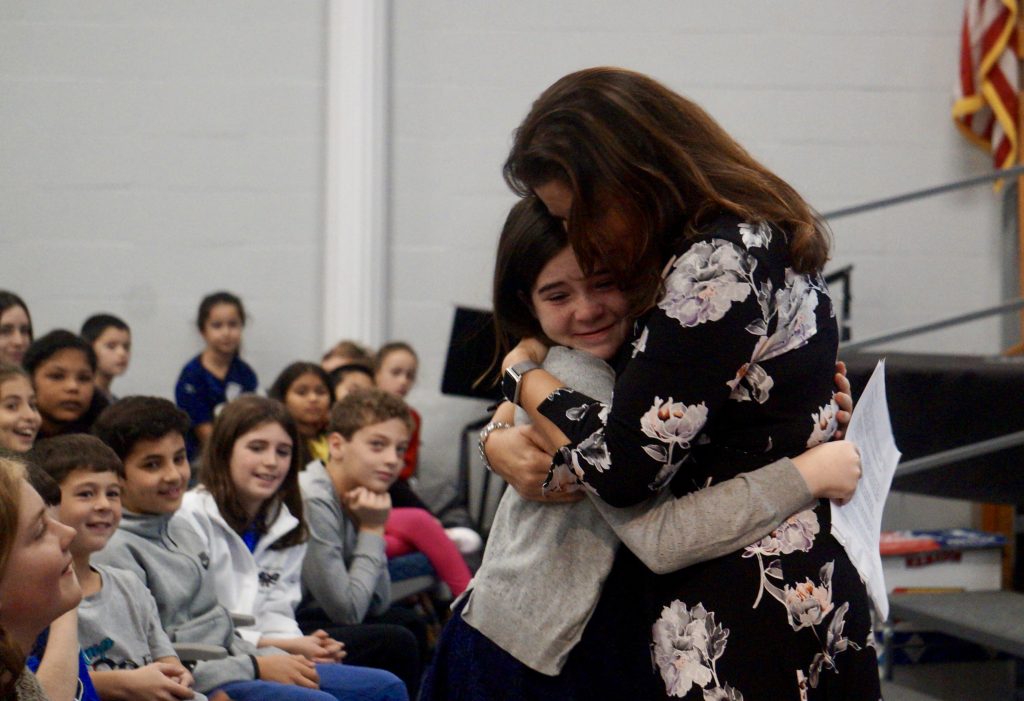 Myra Stanfield gets a hug from Norfeldt Principal Jen Derick after learning that she is the 2020 Connecticut Kid Governor. Photo credit: Ronni Newton

Ten-year-old Myra Stanfield knew the Connecticut Kid Governor results were going to be announced Thursday morning at an assembly at Norfeldt School, and as instructed she has prepared two speeches – an acceptance speech and a concession speech.

As her name was officially announced just after 9:30 a.m. – live on FOX61 by news anchor Rachel Lutzker and Deputy Secretary of State Scott Bates, and shown on a screen in the auditorium – the crowd erupted into applause. 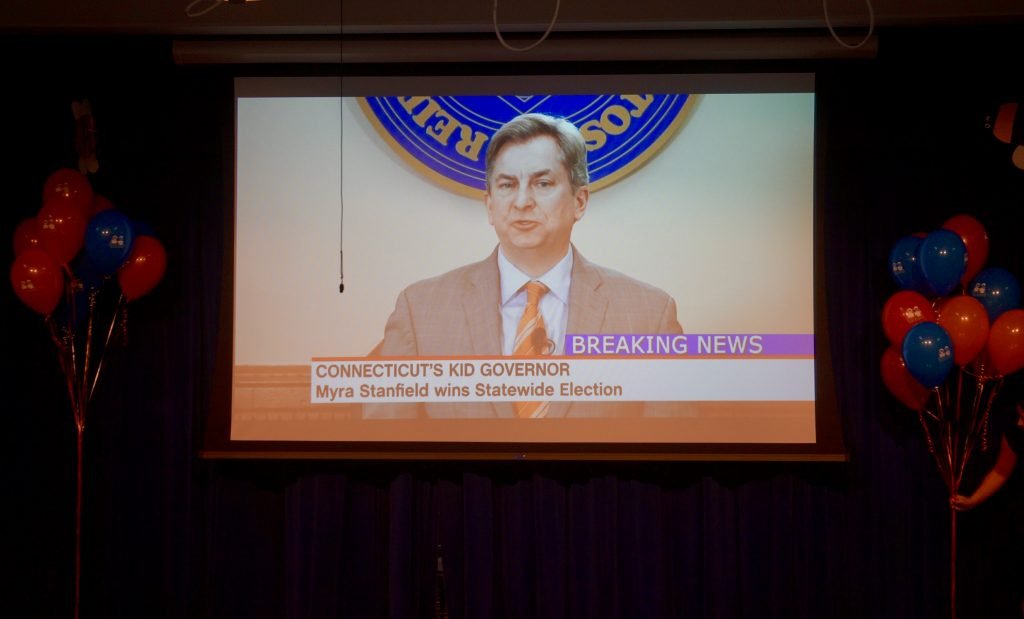 The media presence awaiting the announcement had not tipped off the West Hartford fifth-grader that she was the winner, and she was completely surprised.

“It’s great,” she told We-Ha.com as she prepared for her first press conference with local media. When she heard her name announced, she covered her face in disbelief and her first thought was, “Oh my God,” she said.

When asked how she chose her platform of “Animal Abuse,” Myra said, “Everybody loves animals and nobody notices [the problem of animal abuse] until you put it out there.”

Myra said she has several pets – a dog, two cats, fish, and a hamster. She’s hoping to use the platform she chose in the kid governor election to also convince her mom to let her get another hamster, but also has some other very ambitious goals. Her three-point plan includes raising awareness of the problem of animal abuse, collecting donations of money and items like blankets and towels for organizations such as the Connecticut Humane Society, and holding a statewide adoption event sometime next year.

This was not the first election Myra entered. She was elected president of the Norfeldt Student Council, and that’s what gave her the idea of running for kid governor. Her response to a reporter’s question about running for office as an adult was a resounding “maybe.”

Brian Cofrancesco, who runs the Connecticut Democracy Center’s Kid Governor program, emceed the award ceremony, and told the audience about the program.

State Sen. Derek Slap told Myra she was “such an inspiration,” and and role model setting the example that you don’t have to wait until age 18 to get involved in government. State Rep. Jillian Gilchrest said she was honored to be able to attend the special day, and read a proclamation from the General Assembly.

Governor Ned Lamont was unable to attend the announcement Thursday, but offered his congratulations via Twitter.

I am confident there will be a smooth transition of power, and I look forward to meeting with you. pic.twitter.com/2gBHfsadVV — Governor Ned Lamont (@GovNedLamont) November 21, 2019

Ashley Marshall, community outreach manager of the Connecticut Humane Society, shared her gratitude that Myra had chosen prevention of animal abuse as her platform, and the Hall High School Choraliers performed.

West Hartford Superintendent of Schools Tom Moore congratulated Myra as well, and said this is a great example of how votes matter, and you’re never too young to get involved. Moore said that one way young people can get involved in democracy is encouraging their families to participate in the upcoming 2020 Census, to ensure that everyone has proper representation.

In her acceptance speech, Myra said she is “so honored to have been selected to be the Connecticut Kid Governor of 2020,” and plans to start implementing her platform right away, informing and inspiring people. She will also support the Connecticut Humane Society through a fundraiser in December.

“I believe that all animals should have a safe place to live,” Myra said. “All living things should be treated with respect. Pets can make our lives better, too.”

Myra will be inaugurated in January, and will have her own office in the Old State House in Hartford. The other six fifth graders who were finalists in the 2020 kid governor election – chosen from among 29 applicants – will serve as her cabinet. They include Ariana Moreno of Casimir Pulaski Elementary School, Meriden; Daisy Wimberly of JFK Intermediate School, Windsor; Derek Gaszek of Oshana Elementary School, Southington; Dwayne Ceasar of Clover Street School, Windsor; Kylie Nachin of West Vine Street School, Stonington; and Lucie Martinelli, Glastonbury-East Hartford Magnet School.

This is the fifth year of the Connecticut Democracy Center’s Kid Governor program, and more than 6,000 fifth graders voted in this election after viewing the campaign videos of the finalists. Ella Brigs of East Hampton is currently serving as 2019 Kid Governor, and has been forwarding her platform of LGBTQ+ Youth Safety. Previous Connecticut Kid Governors include: Elena Tipton of East Hartford (2016), Jessica Brocksom of Milford (2017), and Megan Kasperowski of Portland (2018).

In addition to Connecticut, Oregon and New Hampshire also elect kid governors each year, and Myra will be collaborating with those individuals as well. 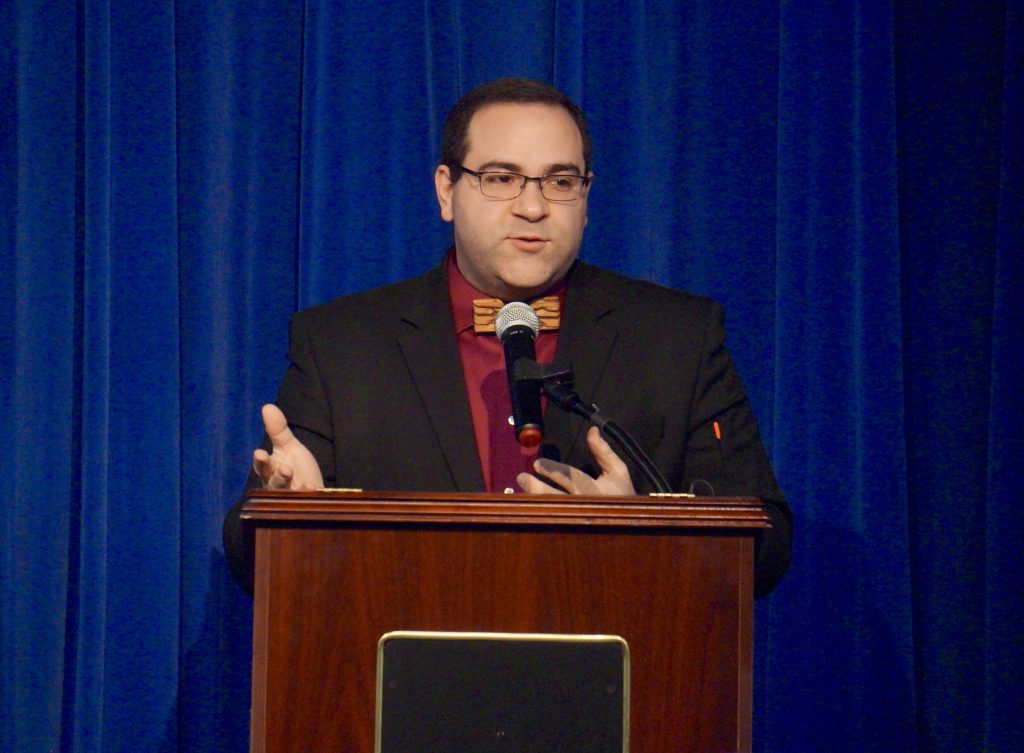 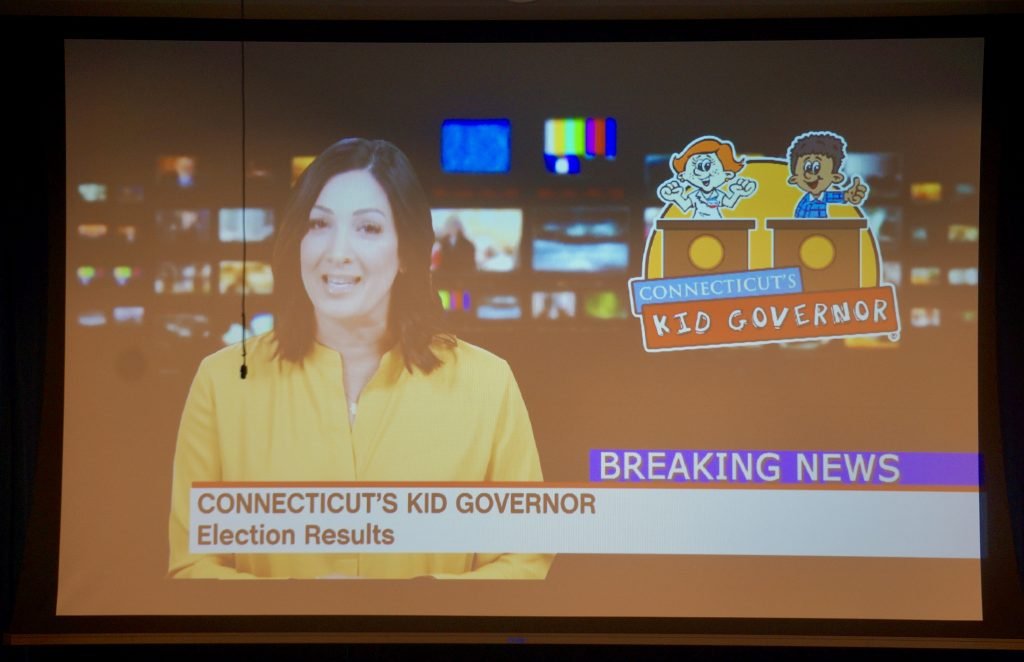 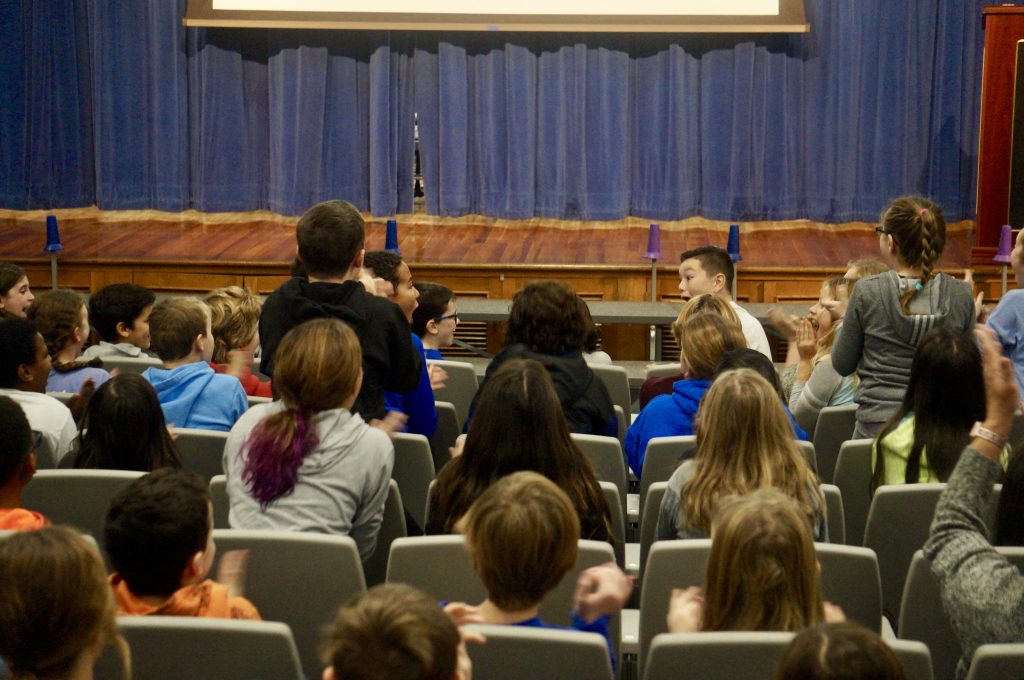 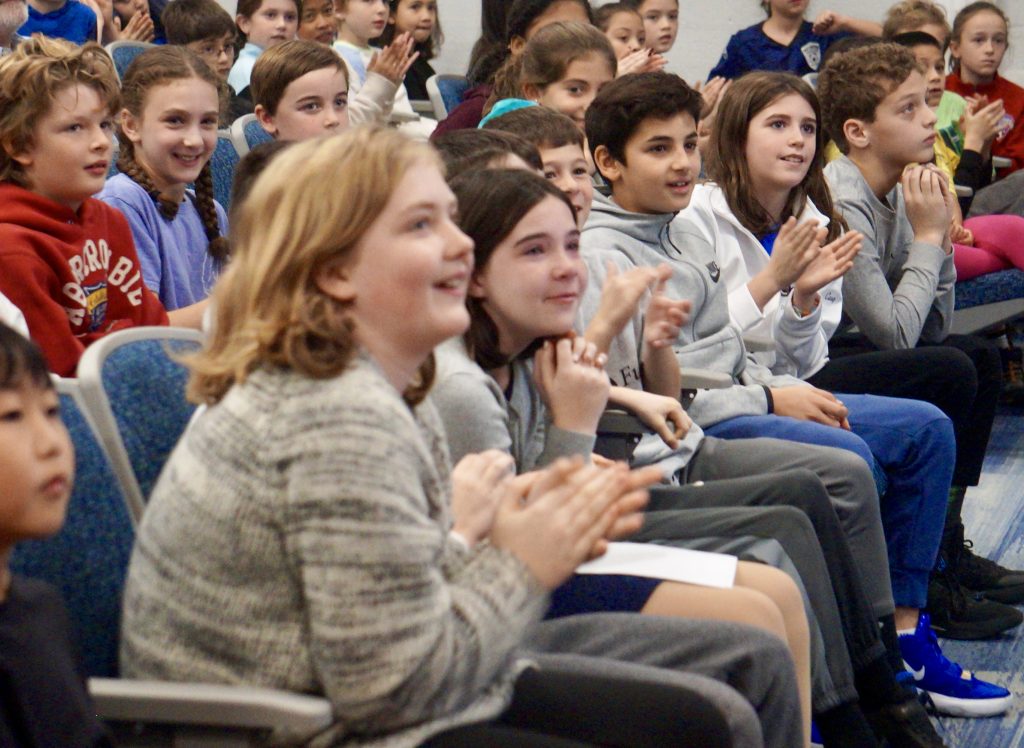 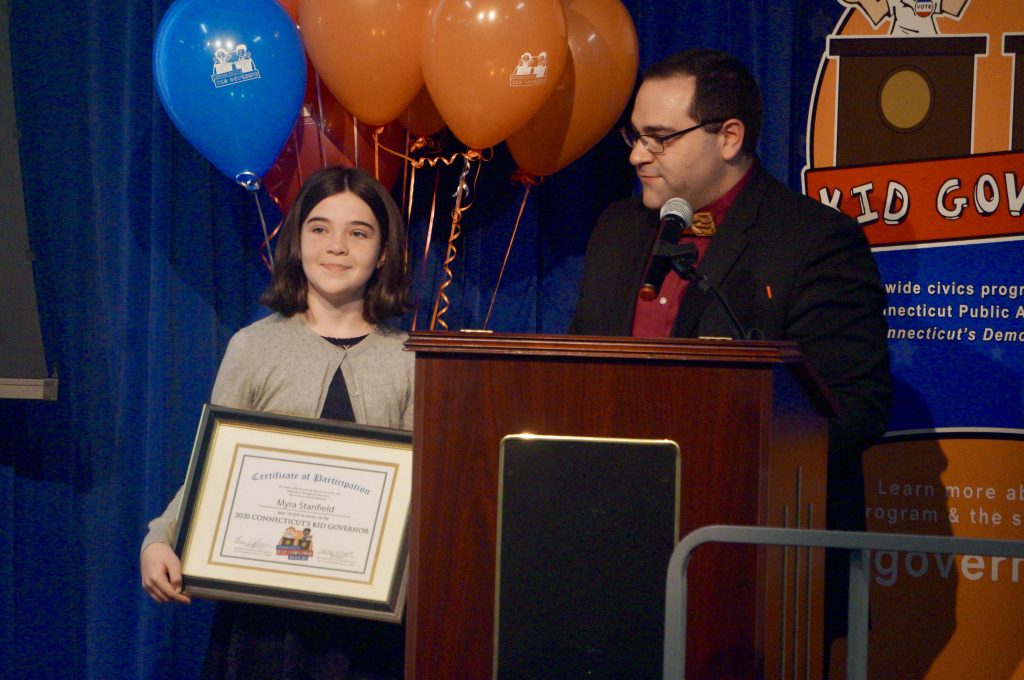 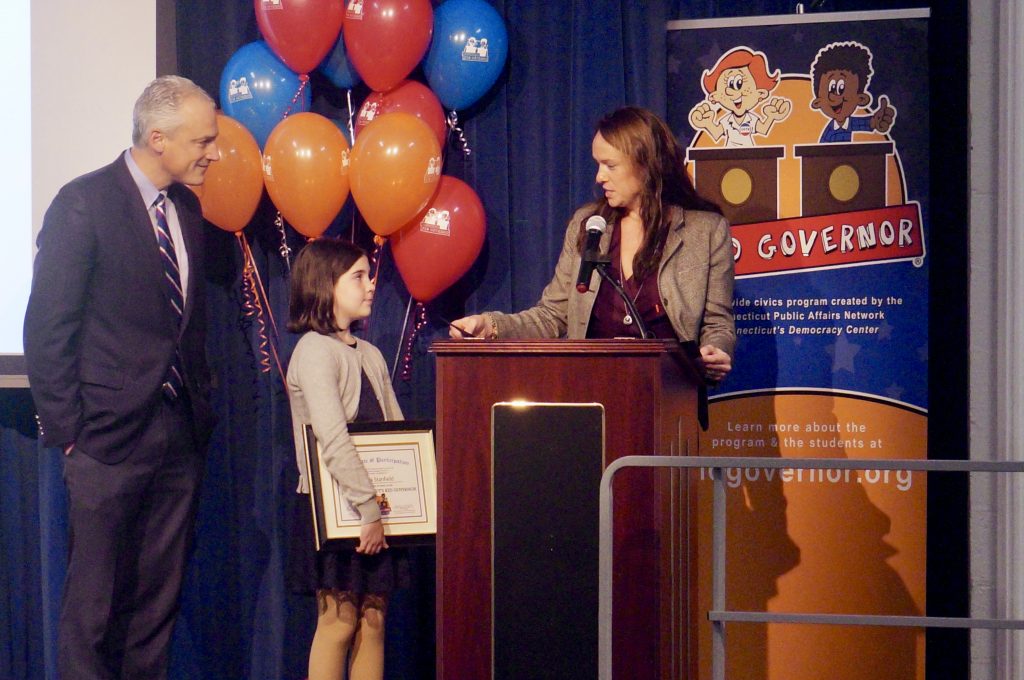 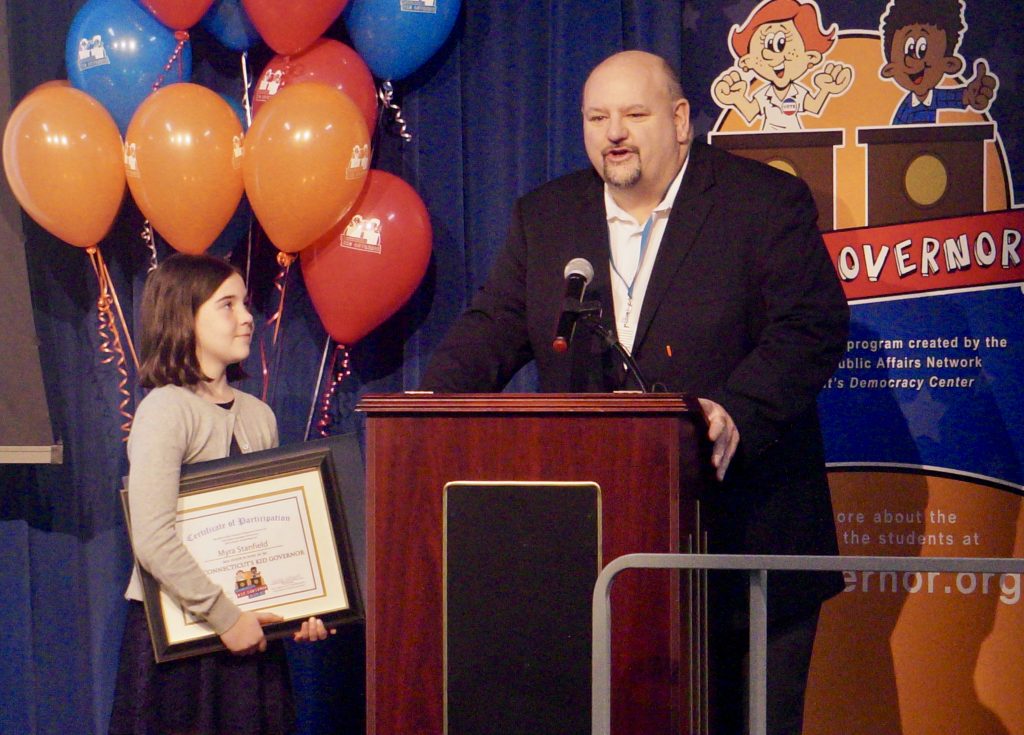 West Hartford Superintendent of Schools Tom Moore tells Myra Stanfield how proud he is of her. Photo credit: Ronni Newton 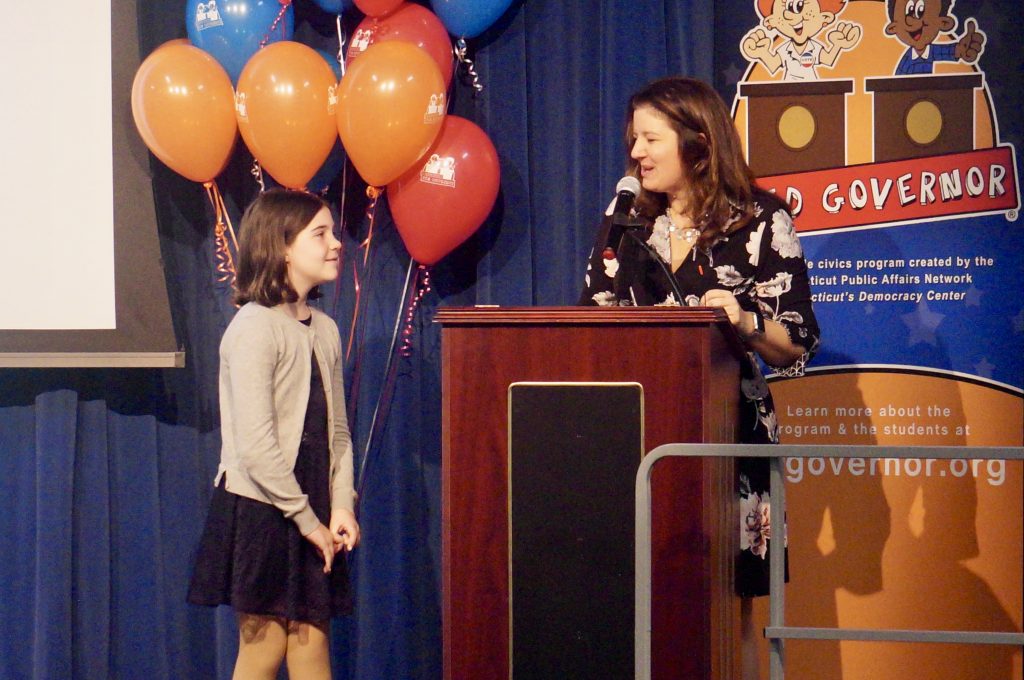 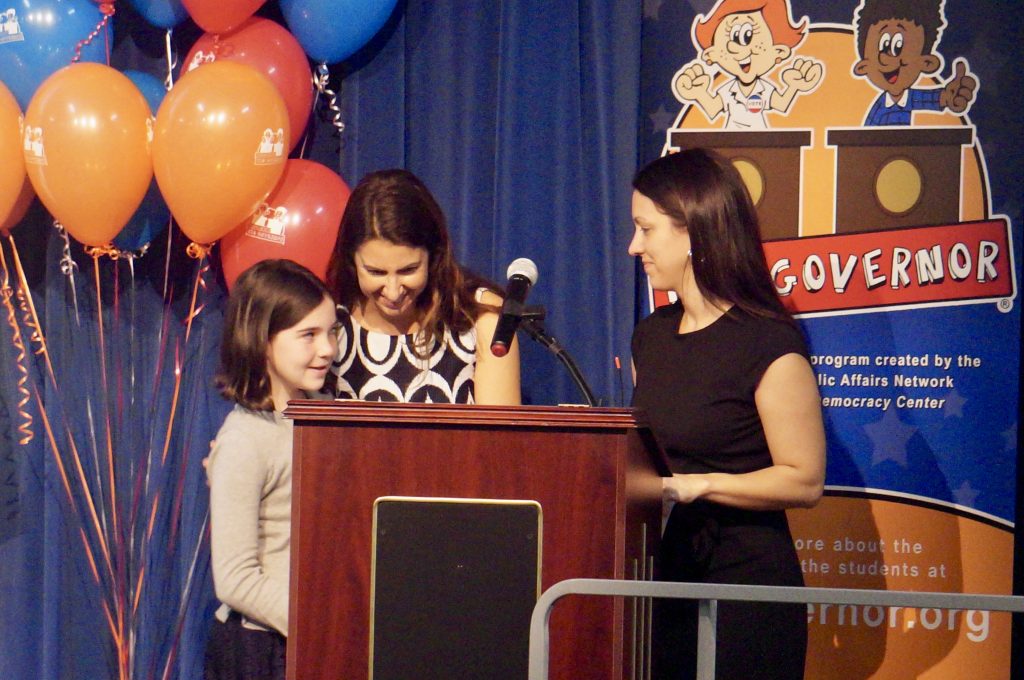 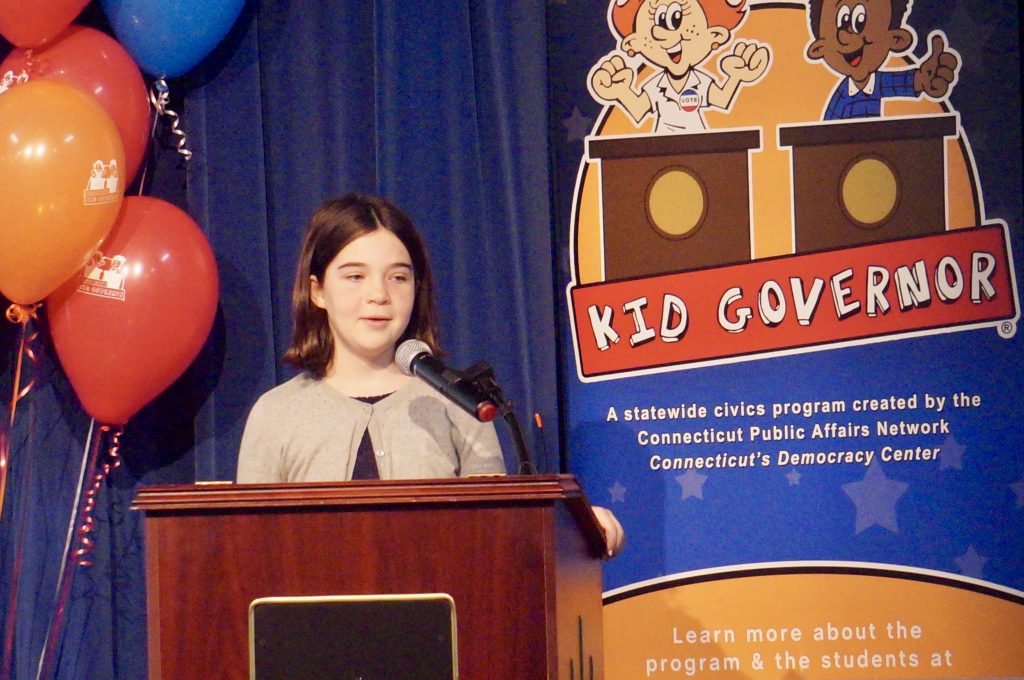 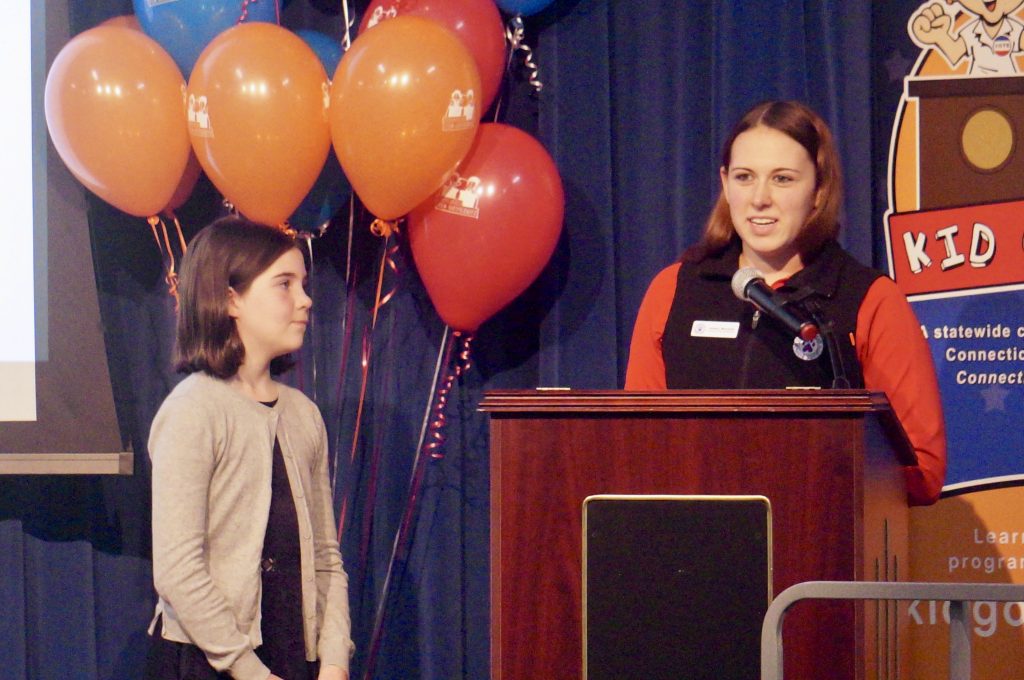 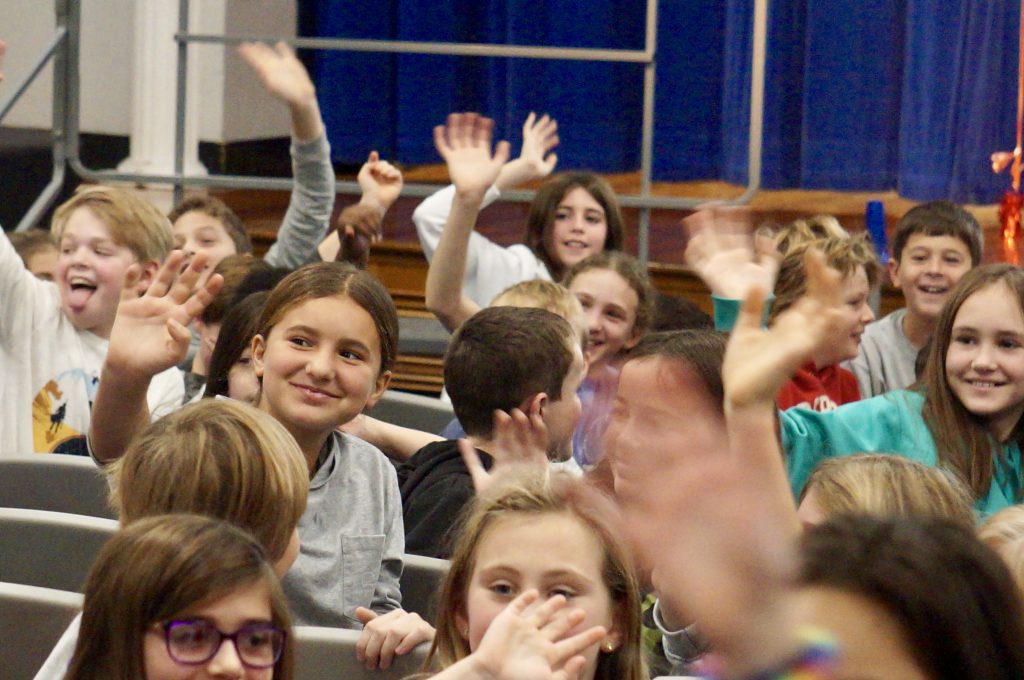 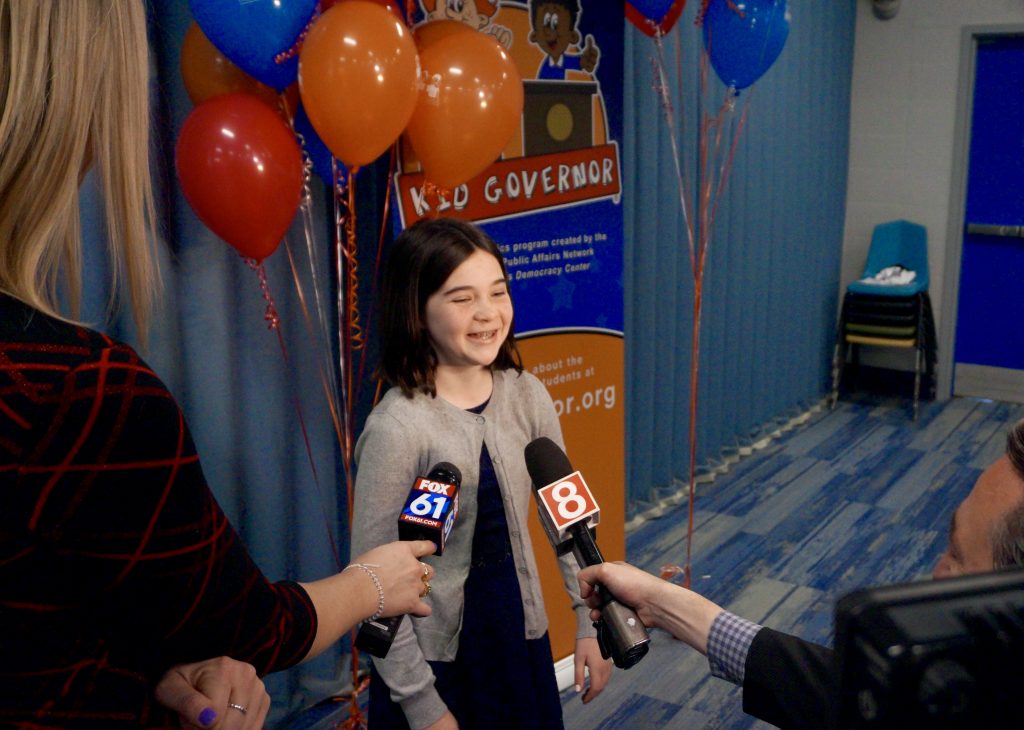 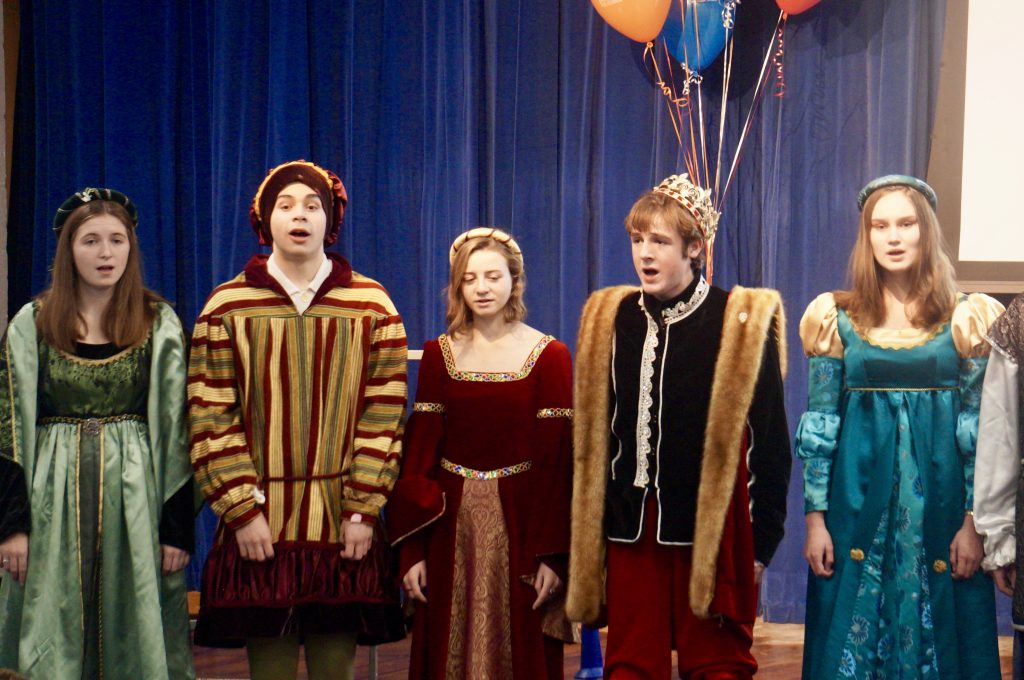 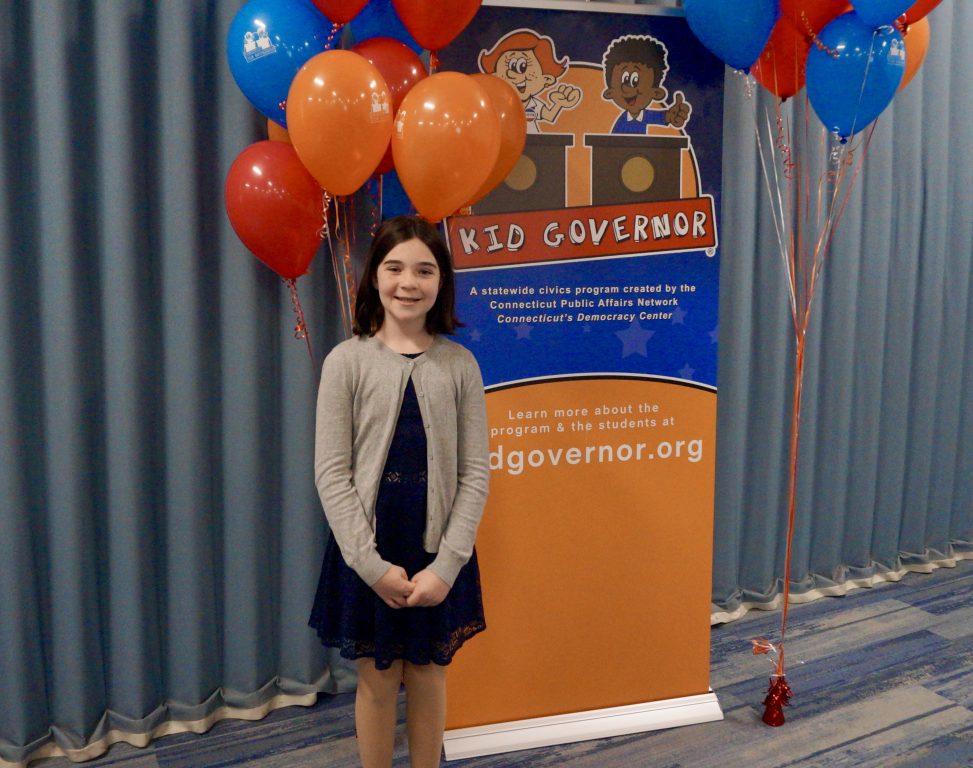 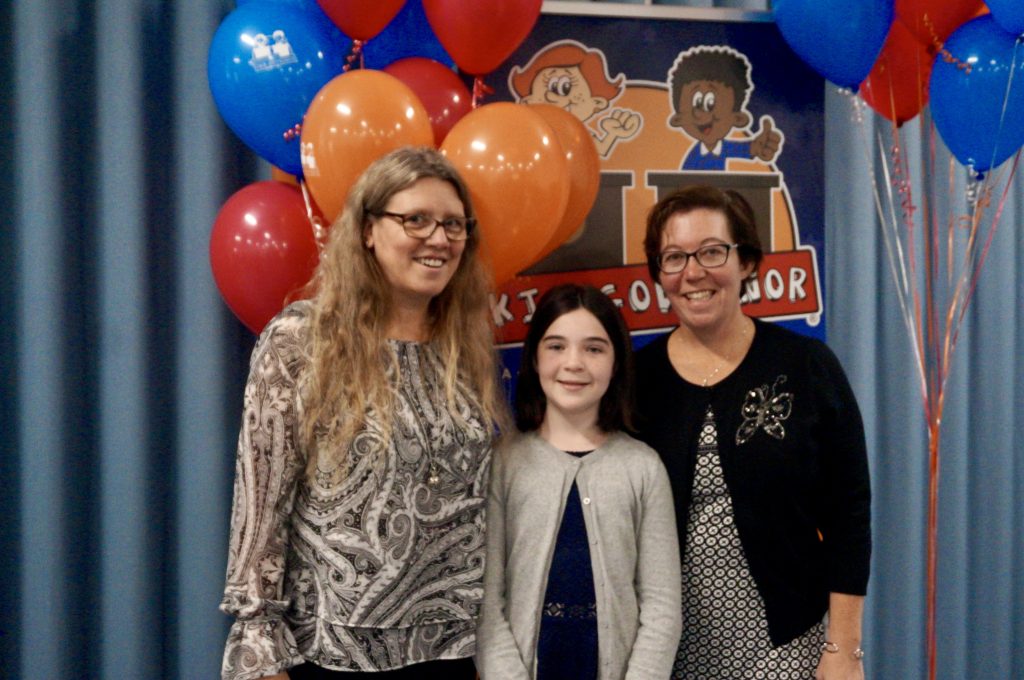 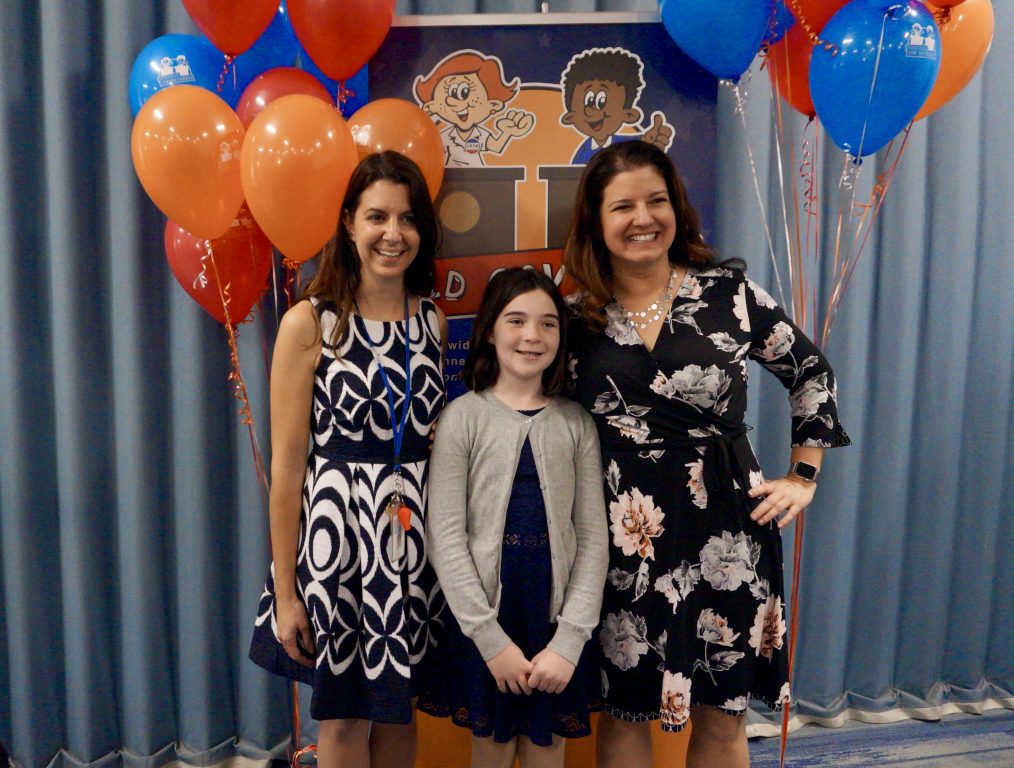 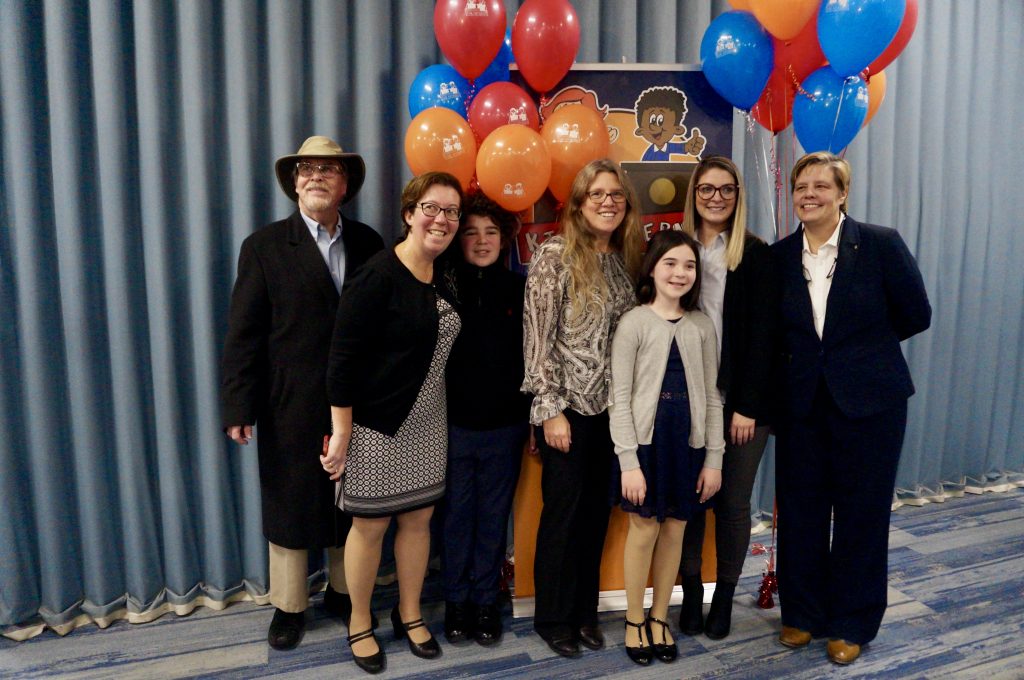