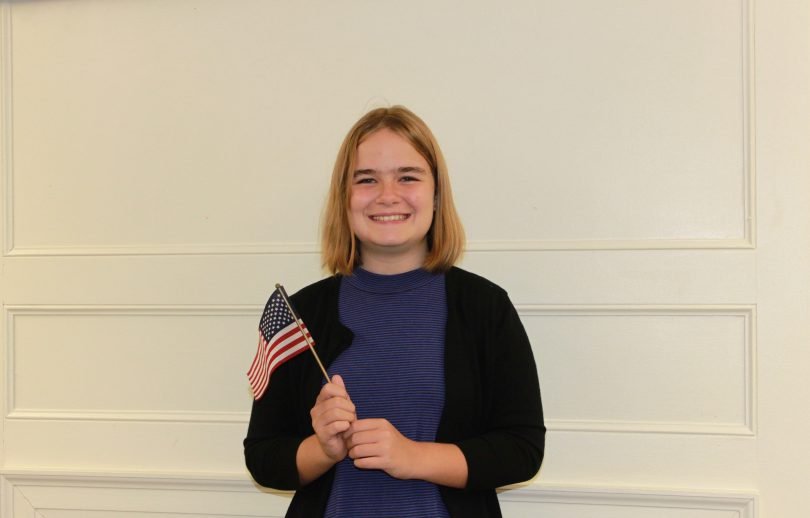 A Kingswood Oxford student who canvassed for State Sen. Beth Bye has been named an intern for U.S. Sen. Chris Murphy.

In the last presidential election, only one in four 18 to 24-year-olds voted. Not only are young people not voting, they’re not getting involved in politics either.

Enter Zora de Rham ’23 of West Hartford. She’s about to turn voter apathy on its head.

Last year, de Rham canvassed for her neighbor, State Sen. Beth Bye, in her bid for reelection. Just recently, de Rham scored an internship for Sen. Chris Murphy and will assist in his campaign in 2018.

Soft spoken and polite, de Rham is not the likeliest of political operatives, but she can speak with authority on issues that concern voters. Working door to door with Bye, de Rham saw an election campaign in action.

She worked in two to three-hour increments, knocking on constituents’ doors to ask them about their concerns and to understand what they were seeking in a candidate. Unsurprisingly, most of the voters were interested in lowering their taxes.

de Rham also noted that many people had misgivings with the Metropolitan District Commission (MDC) which provides drinking water and wastewater collection to several area towns. Due to the budget deficit in Hartford, other towns had to contribute more dollars to cover the budget shortfall. de Rham said that the refrain often heard was, “Why do my taxes in West Hartford have to support Hartford if they’re going broke?”

de Rham said her family is politically engaged and that the news is on in her home every night. She is troubled that businesses are leaving the state due to “random taxes.” She considers that GE moving to Boston a “low blow” and that Hartford’s unique position between New York City and Boston should be a selling point. “Even my mom doesn’t work in the state. My dad has tried for years to start a business in New Britain, but there have been so many roadblocks.”

In addition to refining her political knowledge, de Rham said the canvassing experience has developed her people skills. She said, “Going door to door sounded much easier than it was. After doing it a few times, I learned to get more comfortable, and then I would actually want to do it. It’s been a great experience.”

Preferring to work behind the scenes, de Rham doesn’t plan on running for student government any time soon. “I can’t imagine facing your voters every day. In national politics, you don’t need to.” She continued, “I think politics is insane. There’s a lot of parallels between the two parties, but they only want to recognize their differences, not their similarities. Oftentimes the politicians are thinking more about themselves and not about the voters that are keeping them there.”

Let’s hope that de Rham continues her political career. She already has a winning platform.