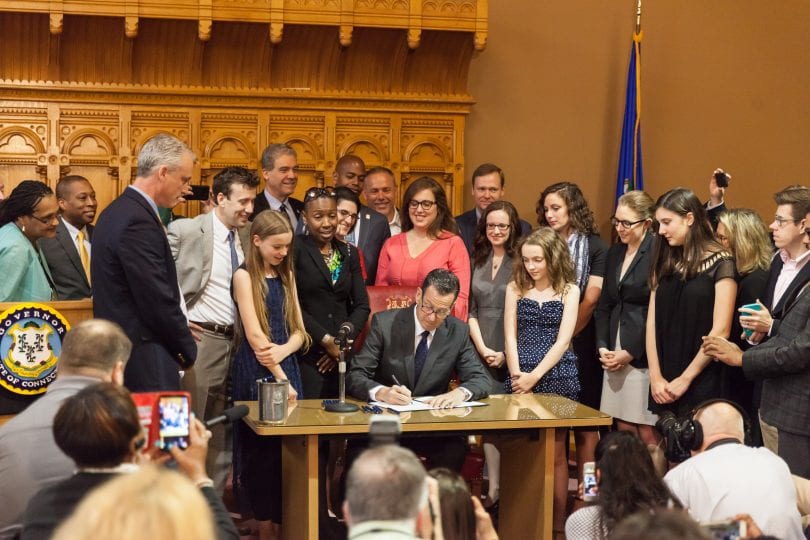 Rep. Derek Slap of West Hartford looks on along with his daughters Maggie and Zoe as Gov. Dannel P. Malloy signs the historic pay equity bill at a recent State Capitol bill signing ceremony. Students from Conard and Hall High School, who had advocated for the bill, also attended the bill signing ceremony. Courtesy photo

Connecticut becomes the fifth state to ban the salary history question from the job application process.

West Hartford students who testified in support of the pay equity bill first introduced by State Rep. Derek Slap in 2017 joined him at the bill signing ceremony Tuesday at the State Capitol.

Students from Conard and Hall high schools, along with Slap’s two daughters who attend Sedgwick Middle School, were excited to see firsthand the bill that they had advocated for actually be signed into law by Gov. Dannel P. Malloy.

“We tell our daughters they can be anything they want when they grow up, we shouldn’t also have to warn them that chances are they’ll be underpaid,” said Slap. “This issue clearly inspired students in West Hartford, including my own girls, and I’m thrilled to see that their engagement and passion created real change. They made a difference and I’m confident this experience will motivate them to keep pushing for equality.”

An excited Hall High senior, Megan Striff-Cave, witnessed the historic bill signing in the Old Judiciary Room at the State Capitol. “As one of the young women who testified in favor of the bill, I am so proud to be here today. To think that I may have helped something like this happen is beyond fulfilling.”

Another student invited to the bill signing by Slap was Conard High junior Grace Evans who also testified for the bill. “To know that I had a part in all of this is very exciting,” she said. “It’s important that someday I can hope to get the same pay as a man for doing the same work because of this bill. I am very proud of Rep. Slap and for all the legislators for their work on this bill.”

The bipartisan law – which passed 142-4 in the House and 35-1 in the Senate – prohibits employers from asking job candidates about their pay history. Connecticut is the fifth state in the country to ban the pay history question. Currently women in Connecticut earn approximately 80 cents on the dollar for the same job as a man. The gender wage gap in Connecticut costs, on average, women and their families more than $500,000 in lifetime earnings, placing Connecticut 46th when compared to other states and wages lost.

“The gender wage gap – also known as a salary anchor – is often perpetuated when an employer bases a salary offer on previous compensation of a job candidate,” said Slap. “Last year we assembled a bipartisan working group, invited the business community and all stakeholders and stayed at the table until we reached a consensus on a good bill that will help ensure no employee who has ever been paid unfairly has to carry that salary anchor with them for the rest of their career.”