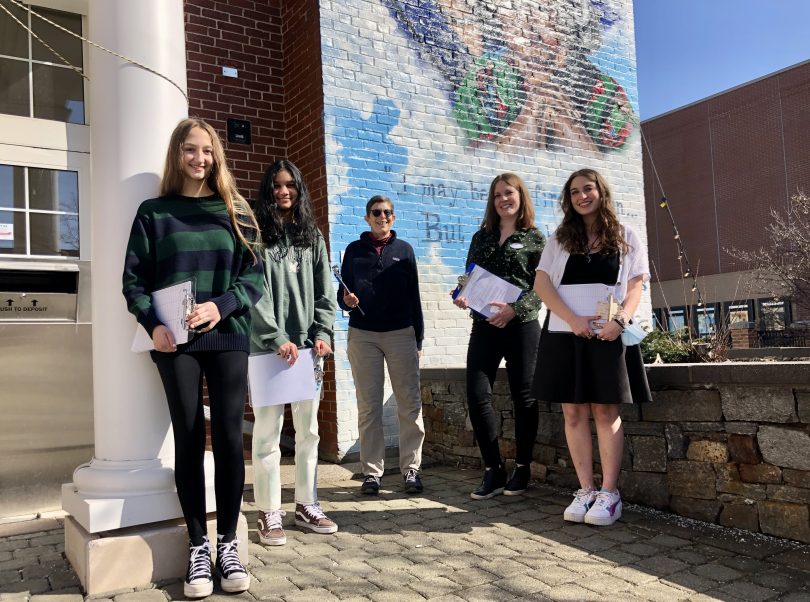 Three members of the Mayor’s Youth Council are requesting that the name of New Street be changed to Dinah Road. 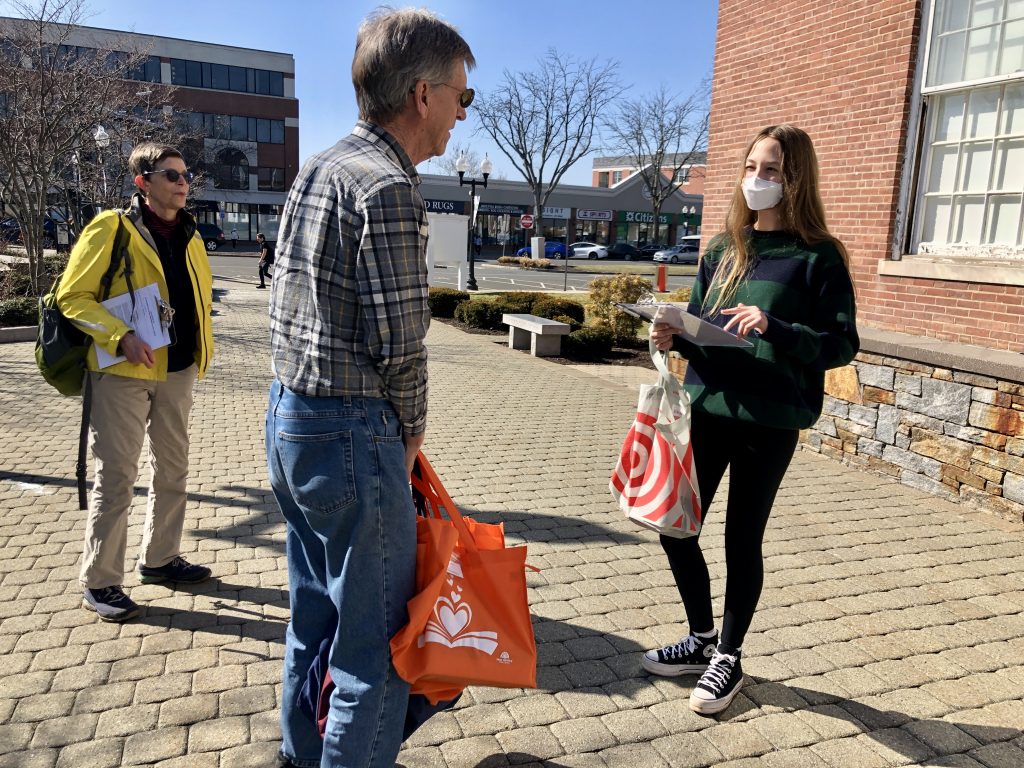 Tom Lorch was the first one approached, and the first to sign a petition to change the name of New Street to Dinah Road. At right is Mayor’s Youth Council member Sarah Granquist. Tracey Wilson is at left. Photo credit: Ronni Newton

The only significance of the name of “New Street” in West Hartford is that it was a street newly-created about 15 years ago when Blue Back Square was built.

Three members of the Mayor’s Youth Council – all students at West Hartford high schools – are collecting signatures on a petition to change the name of that street from essentially a placeholder to something with more significance: Dinah Road.

Sarah Granquist and Priya Sinha, both students at Hall High School, and Tzionya Goldfischer, a student at the New England Jewish Academy, have been working with Town Historian Tracey Wilson to have the street renamed in honor of an African American woman named Dinah, and her daughter who was also named Dinah, who were once enslaved in the West Division of Hartford, now known as West Hartford.

Dinah (1711-1761) and her daughter Dinah (1750-c.1800) were both baptized and became church members. Wilson said it’s likely that their household duties included keeping house, sewing and washing clothing, caring for children, milking cows, and tending to a vegetable garden. According to Wilson, Dinah the daughter was freed in 1791 and lived out part of her life as a free woman.

Wilson is one of three coordinators of the Witness Stones project in West Hartford, and said stones were placed in Old Center Cemetery in 2021 honoring both Dinah the mother and Dinah the daughter.

“But very few people know their names or their stories. Naming New Street after Dinah would help restore their name to history. It would help remind people in the present that they stand where enslaved people walked and toiled.  Knowing these names helps to humanize Dinah and helps to remind us that this town, in part, was built by people who were enslaved,” Wilson said.

Students at King Philip Middle School studied Dinah during the 2020-2021 academic year, which led to the placement of their Witness Stones. They were also involved in a successful effort to get the Town Council to approve a plan for the honorary and historic renaming of streets, but by the time the ordinance was passed, in June 2021, the school year was ending.

In accordance with the town’s ordinance, 100 verified signatures of electors are needed in order to bring the request for a street renaming to the Town Council for a vote. A simple majority vote is needed for approval.

The students are hoping to get 120 signatures, just in case not all are able to be validated, Wilson said. Signatures are valid if the person who signed is at least 18 and a resident of West Hartford. That makes them technically “electors,” although they don’t actually have to be registered to vote.

“If you are all in favor of it that’s enough for me,” resident Tom Lorch told Granquist and the other students. He was approached outside the Noah Webster branch of the library on Wednesday afternoon and was the first to sign the petition.

Students from Kingswood Oxford are also planning to petition the Town Council to rename Sycamore Lane, which is off Sycamore Road near Prospect Avenue, to honor Peleg Nott. Records indicate that Peleg Nott may have lived in the area, Wilson said.

“There was a community here,” Wilson said. “It’s an important part of the story, of slavery here.”

There are currently no streets in West Hartford consciously named after people of African descent, Wilson said. “We think naming New Street after Dinah can help to change the cultural landscape in this town in a positive way.”

The students will be in front of the West Hartford library (Noah Webster branch on South Main Street) on Tuesday, March 22, at 5 p.m. collecting additional signatures. Wilson said anyone who wishes to sign can also email her ([email protected]) to arrange a time and place.