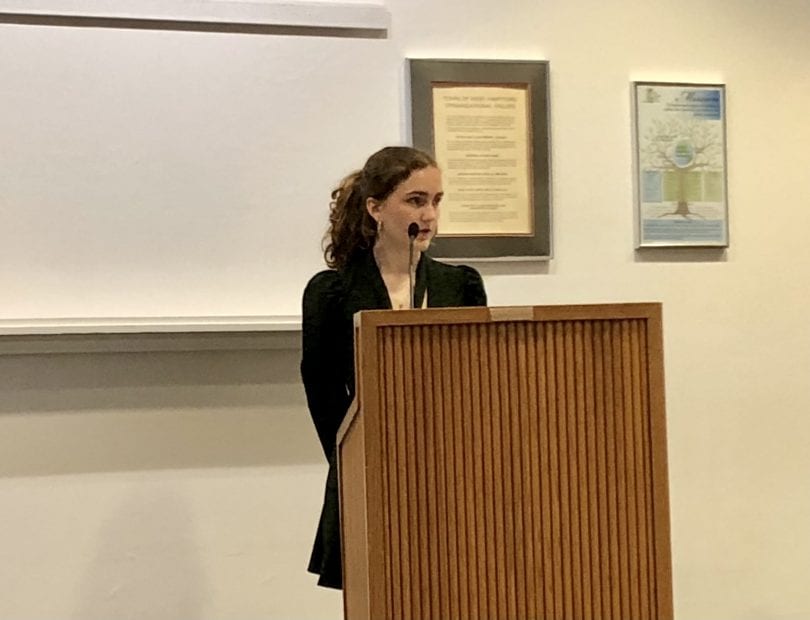 On June 8 the West Hartford Town Council voted unanimously to approve an ordinance establishing a procedure for the honorary and historic renaming of public streets.

In a January Letter to the Editor, Aliza Sadiq and Regina Miller (two Kingswood Oxford students) asked the West Hartford Town Council to rename New Street in Blue Back Square. They wish to honor Peleg Nott, who had been enslaved in West Hartford but according to research was an extraordinary man eventually elected to the honorable position of “Black governor.”

After their research for the Witness Stones Project, Aliza and Regina discovered shocking truths about the history of slavery in town. There were about “70 people enslaved in West Hartford alone, which is double the number we thought it was four years ago,” they said in the letter.

Through the Witness Stones Project, more and more West Hartford students have begun to learn about the town’s tragic history of slavery. The project began in 2018 with Conard students in Sean O’Connor’s AP U.S. History class. This year, the researchers include students from all three public middle schools. Program co-directors Denise deMello, Elizabeth Devine, and Town Historian Tracey Wilson provide primary sources to the students, who dissect and piece together each story themselves.

“The work in Witness Stone has just been fantastic … history needs to be told, and that’s what you’re doing,” said Councilor Ben Wenograd on Tuesday.

By telling these stories, the Witness Stones Project seeks to incorporate the previously unknown lives of enslaved people into the town’s historical record. Renaming streets to honor former slaves, such as Peleg Nott, will bring their lives to our attention.

“A street name is powerful. It becomes a part of the language and the psyche of the people in that community,” said Mayor Shari Cantor at the Town Council meeting. She said New Street would be a good street to start with because it doesn’t require changing the addresses of residents or businesses.

Records indicate that Peleg Nott may have lived on Sycamore Road, which makes it another candidate for the possible honorary renaming, Devine said during the public hearing that preceded the Town Council meeting.

Town Manager Matt Hart presented details of an ordinance that outlines uniform procedures for the honorary and historic renaming of public streets. The ordinance states that any person may submit a renaming application to the Town Plan and Zoning Commission. At least 100 West Hartford electors must have signed the application before its submission.

The town planner will notify residents with frontage on the street to be renamed. Then, the Commission (TPZ) will hold a public hearing to discuss the historic connection and significance of the proposed street name. A majority vote of at least two-thirds of the Commission constitutes approval of the application.

The Town Council must then approve the renaming by a simple majority vote.

A few restrictions on proposed street names exist. For example, no application can propose an existing street name, or a street name that is phonetically similar to a preexisting street. Applications that honor a living person, or that somehow pose a danger to public safety, will not be accepted. The Commission will also consider objections or concerns raised by residents of the street to be named.

In addition to Regina, Julie Levy (a King Philip Middle School student) spoke at the Town Council meeting. She proposed that New Street be named after an enslaved mother and her daughter, who were both called Dinah.

“Our town has 684 streets and none of those streets are named after a person of African descent who was enslaved,” said Rebecca Samuels, another King Philip Middle School student who spoke at the Town Council meeting. Rebecca also voiced support for choosing Dinah as New Street’s namesake.

Amani Snellings, a Sedgwick Middle School student, proposed that New Street be renamed in honor of a slave named Sam.

While these students may not agree on a name for New Street, they do agree on the principles behind this action. Acknowledging the historical significance of West Hartford’s past would be “the perfect sequel to the recent decision to rename Goodwin Green to Unity Green,” said Aliza and Regina in their letter.

“This is very emotional for me … and very powerful as well,” Council member Carol Blanks said during the public hearing. “It really brings me joy to see our young people stepping up to the plate and holding everybody accountable.”

Blanks said it gives her hope to see young people taking things to the next level.

“It really is long overdue for this … you can always try to bury dirt and evil but after a while it begins to bubble up and rear its ugly head … when you know better you’re supposed to do better,” she said. “I just really want to express my gratitude to these students … thank you. Thank you to your teachers and to your mentors.”

“Wow. Tonight was a wow moment. We learn a lot by listening,” Deputy Mayor Leon Davidoff said. “You’re spot on with your research and your proposal … you’ve got all the natural steps to be the next leaders in our community. We now have the power … to make a difference and that’s going to happen here.”

The teachers of students who spoke at the Town Council meeting include Kyle Erickson from Sedgwick, Rebecca Lewis from King Philip, and Katie McCarthy from Kingswood Oxford.

For the full student letters presented at the meeting, click here. For the official public ordinance document, click here.