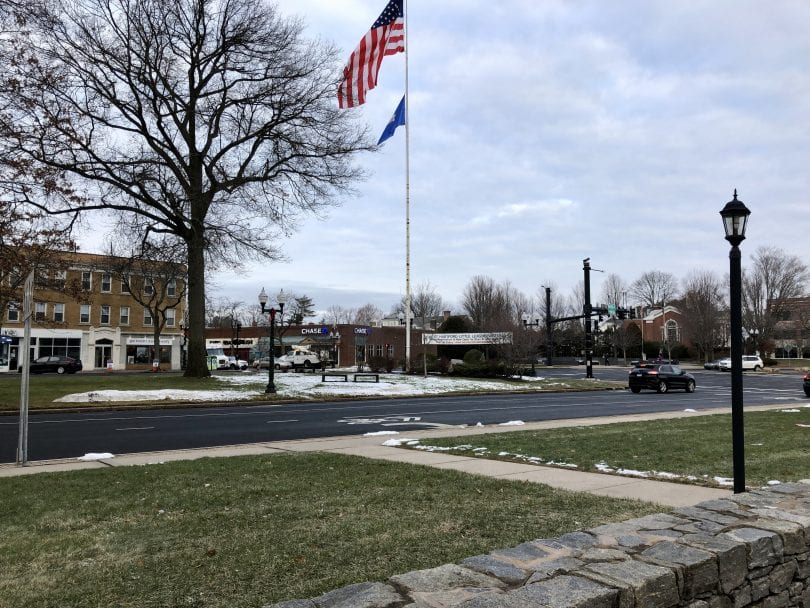 Goodman Green has been renamed “Unity Green,” a change approved by First Church West Hartford which owns the land in the Center. 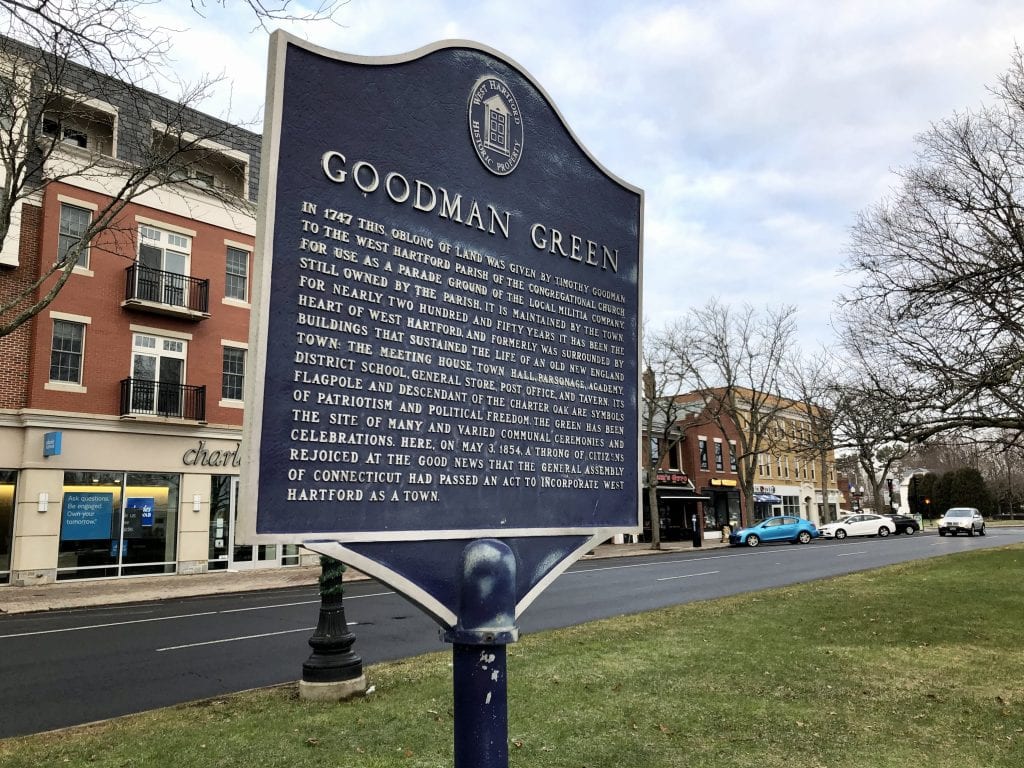 Goodman Green has been the official name of West Hartford’s Town Green since 1747, with a bit of its history, but not all of its history, detailed on a sign. Photo credit: Ronni Newton

The name of West Hartford’s town green – that narrow triangle of land that splits the northbound and southbound lanes of South Main Street just south of Farmington Avenue and is the longtime site of banners and public gatherings – had existed for more than 250 years. But Goodman Green was a name from days of yore, one that few have given much thought to, something that’s just a part of the town’s history.

The green – which is actually owned by First Church of Christ, Congregational of West Hartford – has been leased to the town since 1924. According to First Church, “The Green was deeded to the Ecclesiastical Society of the Church in 1747 by Timothy Goodman for use as ‘a place of parrade [sic] forever.'”

On June 19, 2020, the Town of West Hartford held its first-ever Juneteenth celebration on what was then called Goodman Green. A week earlier, a celebration had also been held at the same spot, as the Pride flag was raised on the green’s flagpole. 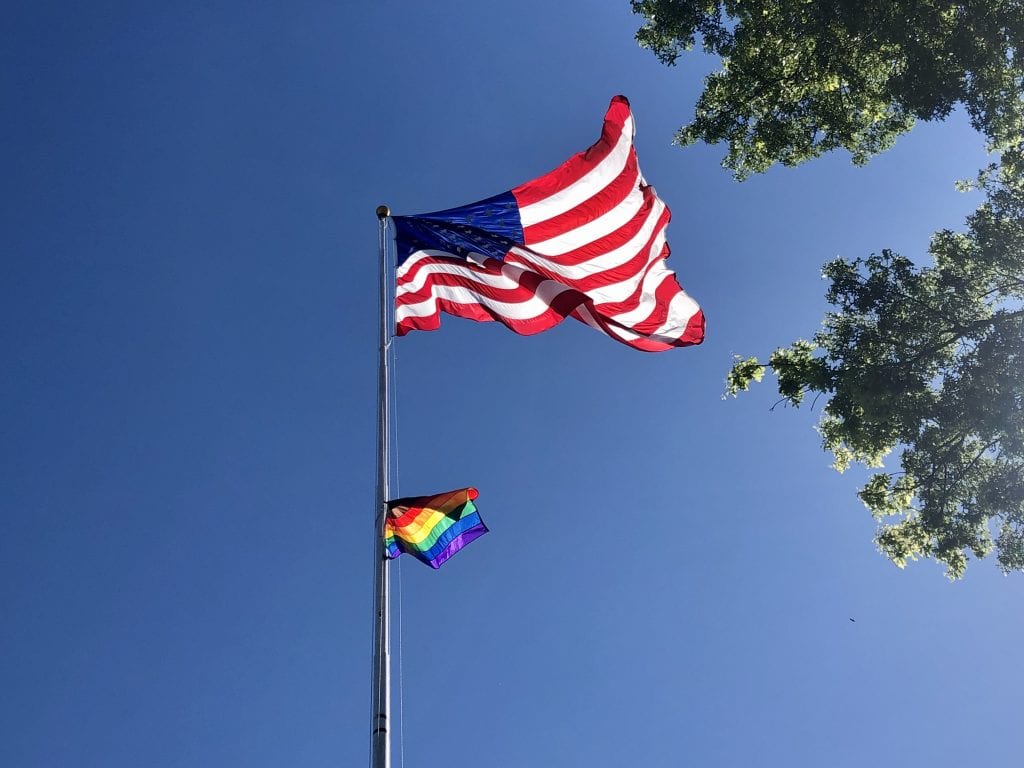 The Pride Flag flies along with the American flag in Goodman Green in West Hartford Center, and will remain throughout the month of June. Photo credit: Ronni Newton (we-ha.com file photo, June 2020)

Adrienne Billings-Smith, founder and president of Concerned Parents of Color of West Hartford, had proposed that the town hold the Juneteenth event, and recognized the irony of holding it in that particular location.

“As I sit here on this land donated by a slave owner, I stand here proudly recognizing the lives of our ancestors,” Billings-Smith said on June 19, 2020. “As a Black queer woman, standing on the very land that was touched by the blood, sweat, and tears of my ancestors, this moment is not lost on me.”

While slavery is not something typically associated with New England towns, research recently conducted as part of the Witness Stones project has brought to light the fact that along with some of West Hartford’s other prominent families for whom roadways and buildings have been named, Goodman was, indeed, a slaveholder.

Following the Juneteenth event, Billings-Smith began working with First Church to ensure they were aware of the history of Goodman Green, and proposed changing the name. 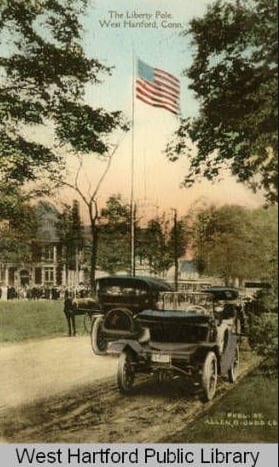 “I’m very excited because as a historian you do a lot of research, but you often don’t see a lot of visual effects in the community,” said Dr. Tracey Wilson, West Hartford’s town historian and co-director of the Witness Stones West Hartford project. “To see the tangible effect is really exciting,” she said, crediting Concerned Parents of Color, and Billings-Smith in particular, with making the name change happen.

“We went through a whole process, presentations to the church, proposing the name Unity Green,” Billings-Smith said. The name was chosen, she said, to unify the community.

She praised the response of First Church, which voted at a congregational meeting on Nov. 29 to change the name of Goodman Green to Unity Green.

“The motion to change the name was made by West Hartford resident Dorothy Stone, a direct descendent of Timothy Goodman,” said Judy Schmidt, moderator for First Church.

Before the vote was taken, First Church Rev. Erica Avina, former church historian Barbara Lewis, and John P. Webster Library Director Jennifer DeSimas also participated in educating the congregation regarding the history of the church’s ownership of the land, and the history of enslavement in the state and town, including the ownership of enslaved persons by prominent church members and ministers.

In September 2018, a brass plaque bearing the name of “George,” the man enslaved by Timothy Goodman, was installed in the Old Center Cemetery. Until the Witness Stones project began in West Hartford in 2018, no one was really aware that Goodman was a slaveowner. 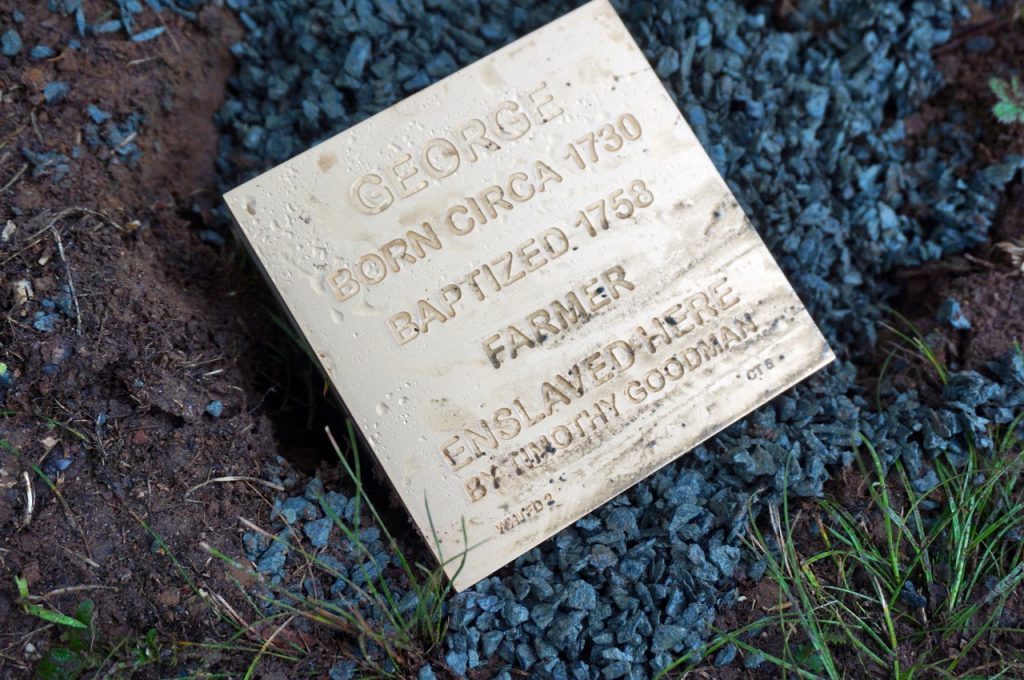 George was one of the enslaved people who lived in West Hartford and is now memorialized with a Witness Stone. Photo credit: Ronni Newton (we-ha.com file photo)

Changing the name is important, Billings-Smith said, and it’s important to note that the land where the celebrations are held has a significant place in West Hartford history, but there are parts of that history that are not always told.

In addition to the name change, Billings-Smith, who was recently named co-chair of West Hartford’s Human Rights Commission, said she will be working with the town to have benches and brick pathways installed on Unity Green. There will also be installations to highlight the names of individuals who played an important role in the town’s history – the history that has not been previously known to most people.

Signs will include QR codes, providing links to information about West Hartford history. Using the QR codes will allow the links to be updated, to provide different stories to mark special moments.

“We want to branch off the Witness Stones Project, to go deeper,” Billings-Smith said.

Signage will include the new logo, which identifies the four pillars of Unity Green: Faith, Acvitism, History, and Leadership. 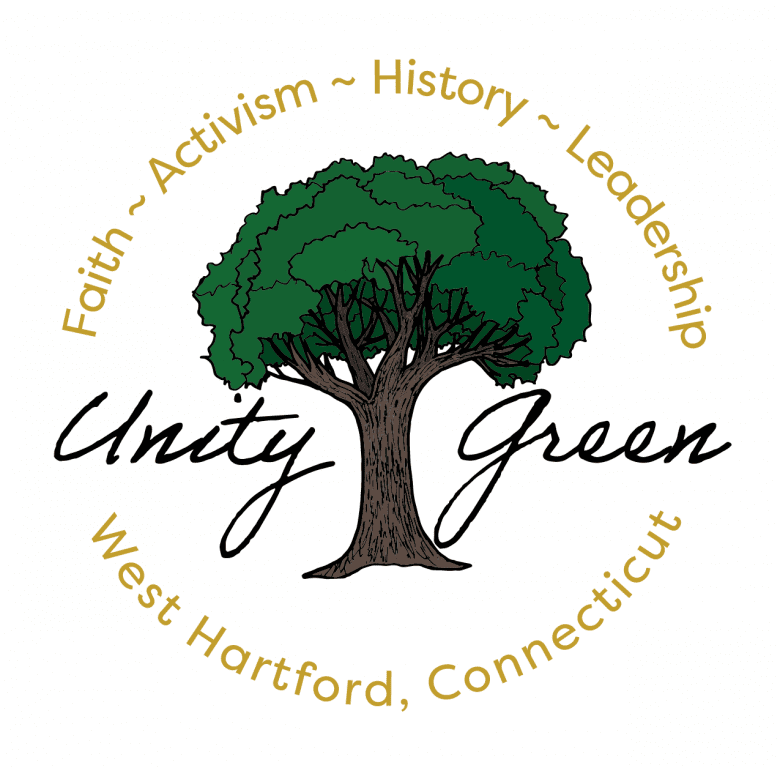 The current Goodman Green sign, which is located at the southern tip of the property, may remain for historical purposes, but may also have some of the language modified, Billings-Smith said.

Town Manager Matt Hart said that while the crosswalks already used the latest technology, the town’s engineering staff is looking into ways to make access to Unity Green safer and more accessible.

“I’m so appreciative of the work of community members and First Church to first recognize the need for change and then come up with a plan to change the name of the historic green,” Mayor Shari Cantor said. “There is real significance in the name change, and I am excited to see the use of the unifying and central gathering space.” 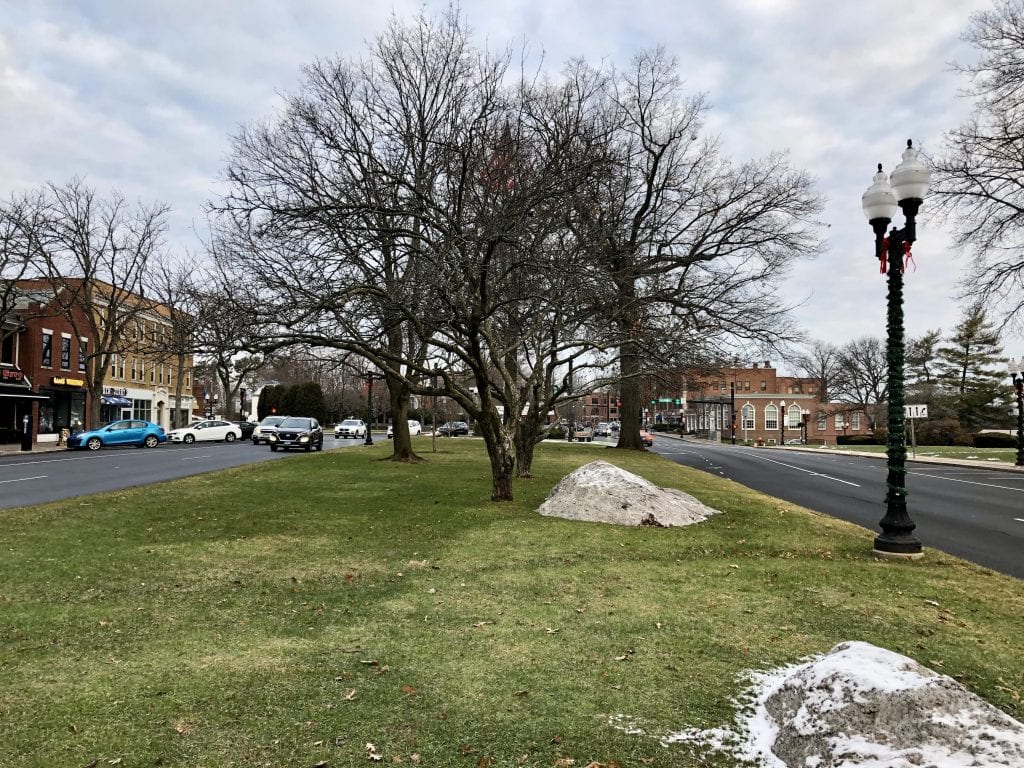 Hart also praised Billings-Smith, First Church, and others in the community for proposing the change and following it through. “Unity Green is extremely fitting,” he said.

“Unity Green will inspire conversation, collaboration, contemplation and celebration of what community means by telling the story of the land, acknowledging the past, and embracing the diverse and rich culture of West Hartford,” First Church said in a statement. “By sharing the stories of West Hartford’s past and present, previously untold stories will give voice to members of the community often overlooked in traditional history. These stories combined with the traditional narratives of our past will yield a more complete and inclusive history of our town.”

First Church plans to continue to partner with Concerned Parents of Color and others in the community to make Unity Green more welcoming, and to provide programming – which will be open to the public – featuring speakers about inclusive history. The first will take place Jan. 17, featuring Dr. Bernard LaFayette, an author, preacher, civil rights activist, and friend of Martin Luther King Jr. Registration is available online. Details about future programming will be available on the church’s website.

Billings-Smith hopes to have a dedication of Unity Green this June as part of the town’s Juneteenth celebration. In November 2020, the Town Council unanimously approved a resolution to make the celebration of Juneteenth Independence Day an annual event.

“This is a huge accomplishment,” Billings-Smith said of the name change. “It’s something new, but steeped in a lot of history, a history not told. It’s giving people a voice – people who were not heard but were part of the community.” 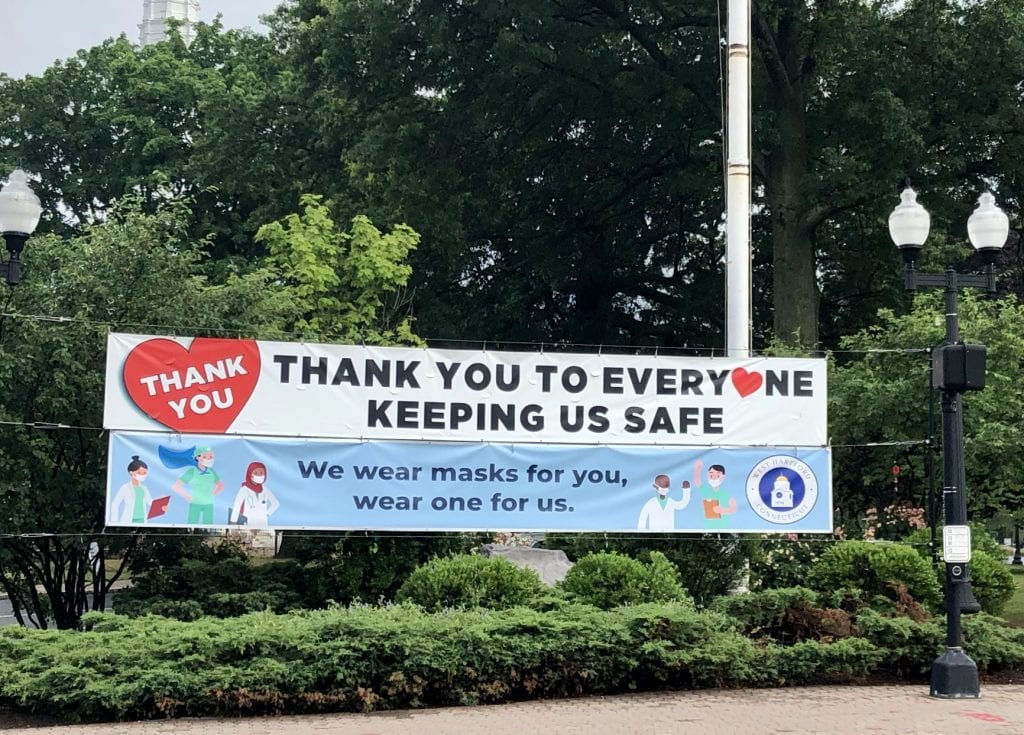 A banner on the town green requests that wear masks for each other. Photo credit: RonnI Newton (we-ha.com file photo)

The Witness Stones project was brought to West Hartford in the spring of 2018, when 42 students in Sean O’Connor’s AP U.S. History class began researching enslaved men George and Jude, and studying more about Bristow, the namesake of West Hartford’s Bristow Middle School and at that time the only African American to have a headstone in the Old Center Cemetery on North Main Street.

The students worked with retired Hall High School history teacher Liz Devine and Wilson, as well as representatives of the Noah Webster House & West Hartford Historical Society and First Church’s John P. Webster Library, to uncover a history that has previously not been in the spotlight. They worked to answer the question: “Why bear witness to slavery in West Hartford?”

According to information the students developed in 2018, with the assistance of Devine and Wilson, George was born c.1730 and baptized in 1758. He was owned by Timothy Goodman, who lived at 567 South Quaker Lane and owned a post office and a tavern in the part of town now known as Bishops Corner. Goodman became the namesake of “Goodman Green.”

A program was held at First Church on Sept. 26, 2018, and audience participants, who included 120 King Philip eighth-graders and about 50 Conard students from the “U.S. History Through the African American Experience” class, walked to the Old Center Cemetery at 34 North Main Street. There they saw the actual Witness Stones for George as well as Jude – who was originally owned by Stephen Sedgwick Sr., that had been placed near Bristow’s gravestone.

Witness Stones has continued to uncover the previously untold history of West Hartford.

Nine more Witness Stones were installed in June 2020, and there are currently 21. 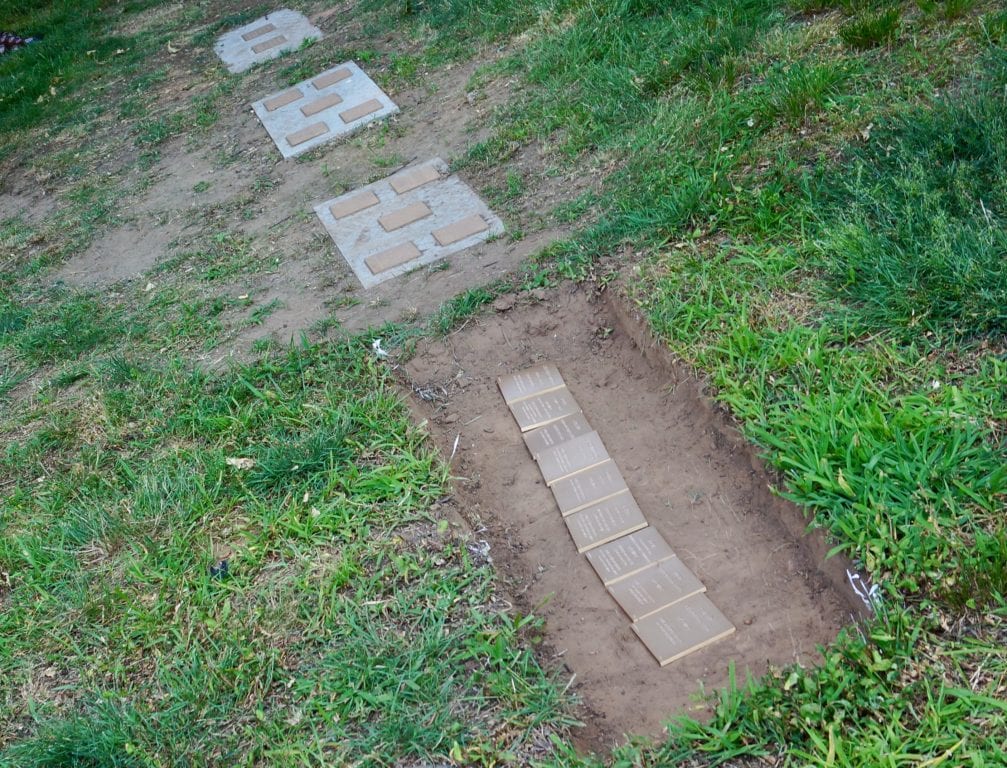 Wilson said that despite the COVID-19 pandemic, the project has continued. They have been working with 750 eighth-graders from West Hartford’s three public middle schools plus Kingswood Oxford School to tell the stories of 11 more individuals who were enslaved in West Hartford.

Some of the students have created podcasts, which Wilson said hopes can be incorporated into the interactive signs in Unity Green. “We hope the voices will come from the students.”

In addition to the work with students, Wilson said there is now also a community component to the Witness Stones project, and through that there may be the stories of four more enslaved people told.

Wilson said the next installation is planned for Juneteenth at Old Center Cemetery, with participants then moving to Unity Green for the dedication, combining a celebration of the intertwined projects that reveal another side of the town’s history. “We really feel like we’re partners with Concerned Parents of Color,” Wilson said, as well as with First Church.

More information about Witness Stones can be found on the website.

In the coming weeks there are also plans for a community conversation that will include Wilson, Billings-Smith, Roszena Haskins, the director of Equity Advancement for West Hartford Public Schools, and the West Hartford African American Cultural Organization. 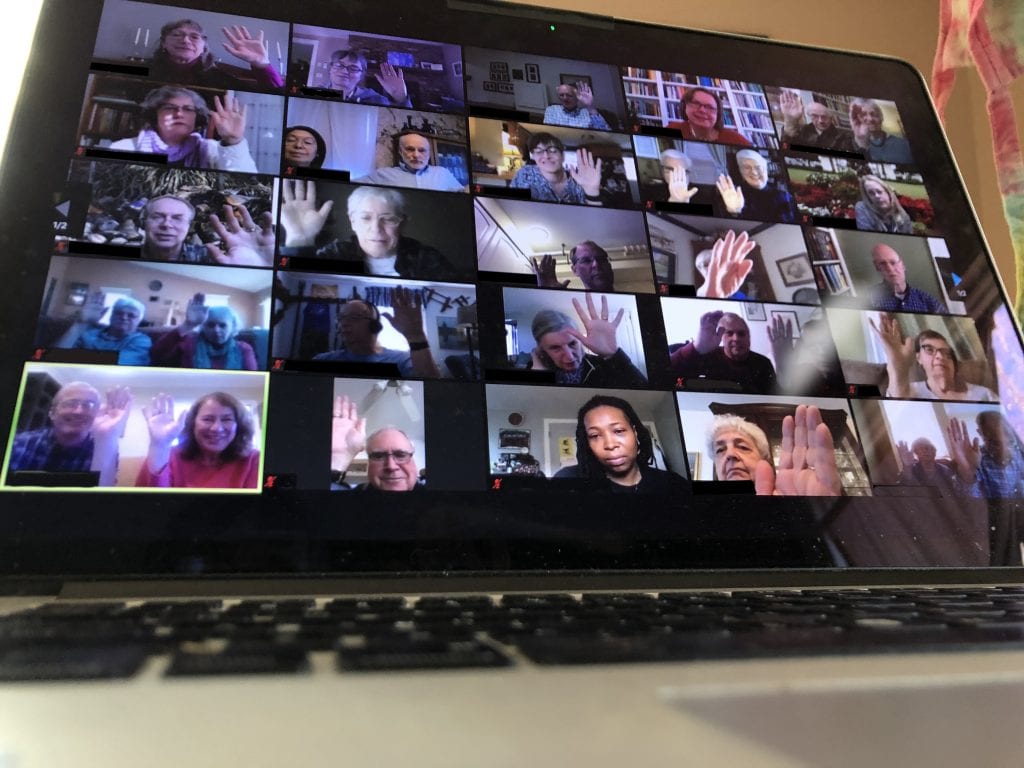 First Church congregation voting on the naming of Unity Green via Zoom. Courtesy of First Church