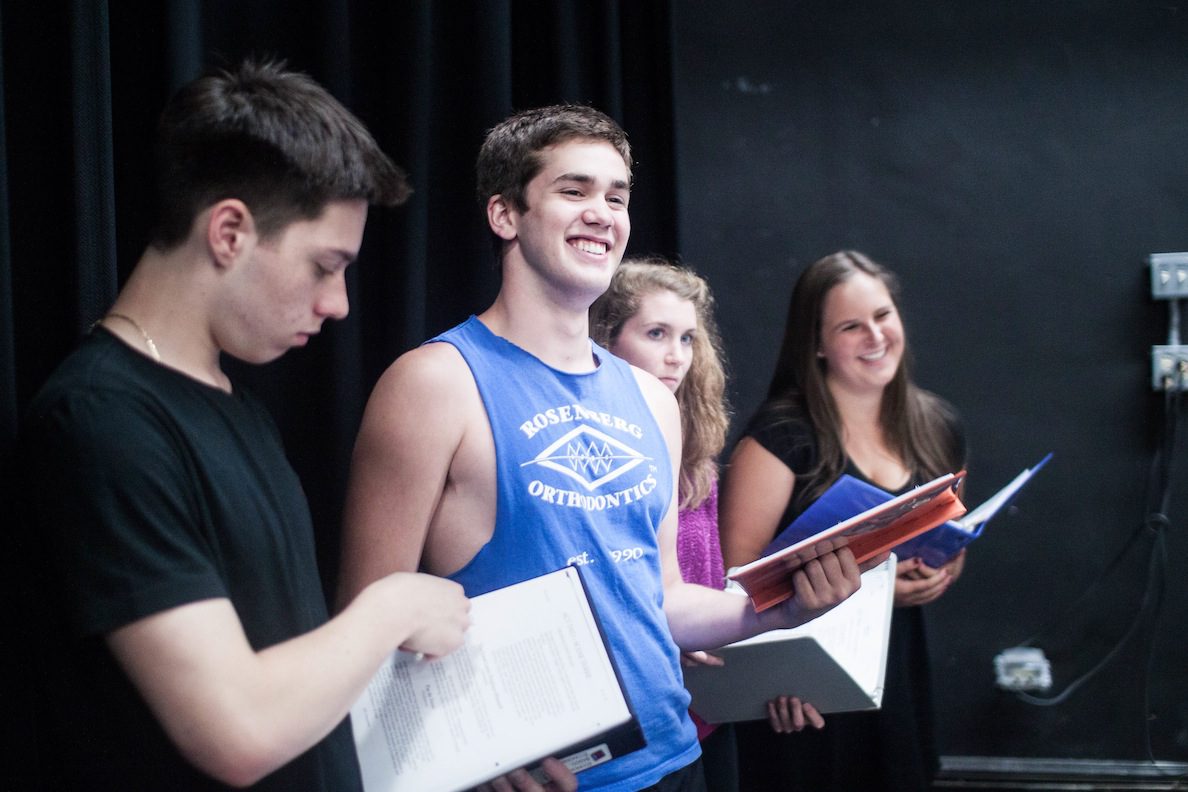 Ryan DeFranzo, Thomas Doelger, Brigid Lucey, and Kendall Edwards take a break while rehearsing a scene from 'On the Town.' Rob Kavaler of RDK Design & Photography.

“On the Town” follows three sailors in the US Navy (Gabey, Chip, and Ozzie) on a 24-hour shore leave in New York City during June 1941, when time is of the essence. Based on an idea by Jerome Robbins, “On the Town” proves that nothing in life is guaranteed, love is fleeting, and what initially seems valuable may not be so important after all.

Of the West Hartford Summer Arts Festival production, running July 31-August 3, Artistic Director Sara Demos Avery explains, “Though the story’s set in World War II, the audience will have no problem relating to the characters in the show, as they take on the timeless human experiences of love at first sight, disappointment, and personal evolution.”

“New York, New York, a helluva town,” sings Gabey, played by West Hartford resident and Presidential Arts Scholar, Thomas Doelger. In the opening scene, he arrives in the Big Apple with one goal – to find love. However, Gabey comes to realize that the New York City he encounters is different from the one he’s been dreaming of. “Out of the three sailors, Gabey comes to the city with the most fantasized view of what New York will be,” says Doelger. “As the minutes tick by on his one day in New York, it becomes clear that there’s a lot more to New York than meets the eye.”

In its 38th year of educating and showcasing young talent from all over Connecticut, the West Hartford Summer Arts Festival is led by founder and Executive Producer Haig Shahverdian and Demos Avery.

Popularized by the 1949 movie starring Gene Kelly and Frank Sinatra and with a Leonard Bernstein score that calls for a full symphonic orchestra, “On the Town” presents a unique challenge to the SAF artistic staff. Demos Avery explains, “To pull off a show of this magnitude, you need a tremendous number of individuals and aside from a talented production team, we are thrilled to have 45 actors and 37 musicians of the highest caliber to bring this iconic piece to life.” In fact, this year’s cast hails from 14 towns throughout Greater Hartford, and represents over 20 different high schools and colleges.

The orchestra is under the direction of Emmett Drake, who says, “’On the Town’ is not your standard musical theater score; it’s really a contemporary ballet with a unique jazz component. The music is extremely difficult and the students in the orchestra are rising to the challenge admirably and performing at an impressively high level.”

Kate Morran, choreographer, agrees. “Thankfully, we have an amazing cast, which has made the choreography come to life in ways I never expected. It’s pretty magical to witness the story-telling ability in these young people.”

“The concept of finding that one special person is timeless and in an age of online dating and social media, this show harkens back to a point when connections had to be made face-to-face,” says Demos Avery. “This classic theme of finding that special someone is why ‘On the Town’ has spoken to audiences since its Broadway debut in 1944 and is being revived on Broadway this season.”

Performances of On the Town will be held at the Mandell Jewish Community Center of Greater Hartford July 31 through August 2 at 7:30 p.m. and August 3 at 2 p.m. Tickets are $16 and can be purchased at www.westhartfordsaf.com. SAF is sponsored by the Town of West Hartford’s Department of Human & Leisure Services and the Board of Education.