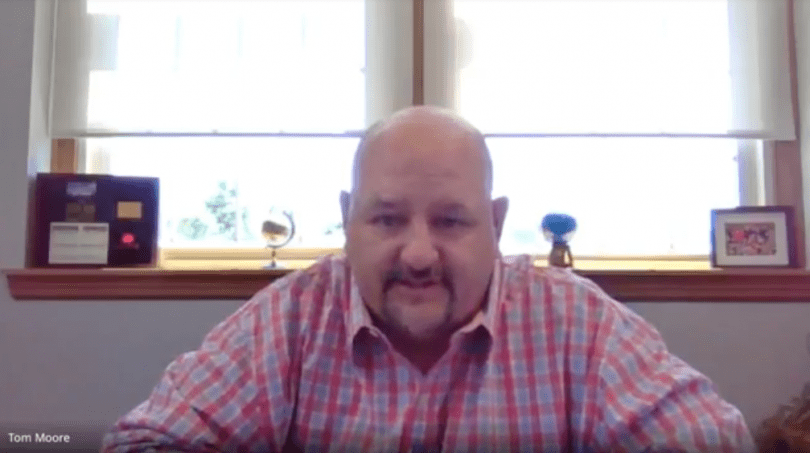 West Hartford Superintendent Tom Moore provided a message to families via video about what schools might be like next fall. Screenshot

West Hartford Superintendent of Schools Tom Moore provided a letter, and a video message to families about what the 2020-2021 school year may look like.

Superintendent Tom Moore isn’t yet able to release an exact plan for what the 2020-2021 school year will look like in West Hartford, and is hoping guidance from the state will soon be forthcoming, but he made one thing very clear to families in a letter and video message released last week: “Our kids deserve to be in school, we need them to be in school.”

Moore said the district awaits guidance from the state’s Department of Education and Department of Public Health, but his intent is that students will return to school buildings in the fall, and if the state doesn’t strictly dictate the plans and leaves it open to the districts, “I plan to be open and welcoming our students back,” he said in his letter to families.

Moore said that initial discussions included planning for “everything” – scenarios that included a continuation of distance learning, or perhaps just in-person school for grades K-5 to allow parents to go to work. All scenarios are extremely complicated, and he said that if elementary school classrooms need to be limited to 16 students per class, that would mean 52 extra classrooms – which the district doesn’t have unless they use classrooms at the middle and high schools.

As the impact of the COVID-19 pandemic began to ease in the state, as people began socializing again in small groups, as plans for summer sports leagues were announced, as families planned trips to DisneyWorld, Moore said he felt he couldn’t look a parent in they eye and tell them their child couldn’t sit in a history class.

Moore said he understands that some students have compromised immune systems, or members of their family do, and there will be some way to make sure they are accommodated and not left behind.

Whatever plans are being developed now, Moore specified, are only for the upcoming school year, which begins in less than 80 days.

“Our kids need schools this fall an we are going to do everything we can to get them open, but things are going to look dramatically different,” Moore said in the video.

What that means has yet to be finalized, but he said schools may have to look more like what they used to when parents themselves were students – desks in rows rather than in learning centers or with beanbags on the floors for comfortable reading nooks.

Maintaining physical distancing in the schools – particularly for the youngest students – will be a challenge. Anybody that tells you they can keep a 6-year-old a certain distance apart from each other and adults “they’re lying to you,” Moore said in his video message. That’s why, “masks are going to be a pretty significant part of our future. I don’t know for how long. I’m planning for next year.”

Cohorts, trying to keep kids together with teachers coming to them, will also likely be a significant part of the plan, to limit contacts as much as possible.

There will also likely be more times teachers will bring kids outside for class or outside for lunch, weather permitting.

In the middle and high schools, Moore said, the district is looking at block scheduling. “This limits the number of passing times in the buildings, cuts them by more than half.” It will also give students more opportunity for study halls perhaps allowing for late arrival or early dismissal.

“It gets our kids in school, I think it’s something that is likely – again, for next year.”

Other significant changes that the district is likely to see next year include:

Moore reiterated that everything he is mentioning applies to the 2020-2021 school year only – at least for now. “We have to do everything we can to keep schools in session,” he added.

Moore said he is very encouraged by the numbers, the prevalence among kids under 20. But, he said, “We want to be smart, and we want to have our kids in school, and we want to keep them safe.”

Moore said he doesn’t know if all schools in the state will follow the same type of plan.

In his letter to families, Moore, whose daughter is graduating from Conard this week, thanked the community for their support.

“I wanted to reach out to all of you, as we close this school year that has been unlike any other, to thank you for your partnership, your support, and the commitment to education that is the hallmark of West Hartford. Monday night, I was fortunate to stand in my yard and wave to graduates (including my daughter) as they drove by in cars that they had decorated for the occasion. I was incredibly moved, and touched, by the number of kids who, on their night, were saying thank you. As I speak to people who turned out for the parades across town, it has become clear to me that this was more than just an opportunity to congratulate our seniors. It was our chance to come together as a community, as families, and express hope for the future not just of these young adults, but for all of us. I found it to be a well needed dose of optimism in these exceptionally trying times,” he wrote in his letter.

“We’re actively planning for a future with our kids, in school,” Moore said in the video. “I appreciate your support greatly.”

The conversation will continue, and Moore expects further communication in early July.

The district has established numerous committees headed by members of the executive team – Assistant Superintendents Paul Vicinus and Andy Morrow, Director of Pupil Services Gretchen Nelson, Director of Diversity Advancement Roszena Haskins, Executive Director of Human Resources Rick Ledwith – who are each focused on an aspect of the reopening plan, Moore said at the June 2 Board of Education meeting. The committees are looking at scheduling, community outreach, impact on various stakeholders, cleaning and sanitizing buildings and other property, and workplace safety for employees. The committees will be actively communicating with each schools’ PTO throughout the summer, and with the town-wide Parent Teacher Council.

Moore’s vide to families can be viewed below.