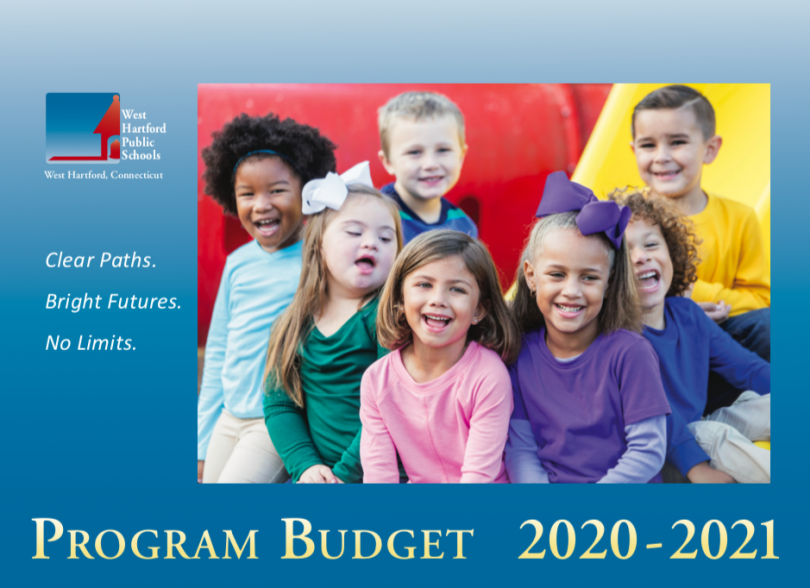 The annual budget season officially began in West Hartford with the presentation of the superintendent’s proposed 2020-2021 general fund budget to the Board of Education Tuesday night.

“Any time we present a budget we’re presenting really where our priorities are,” Moore told the Board. “We need to look at who we are as a district, make sure we understand what we’re representing, who we’re talking about here, and who these numbers directly relate to,” he said as he outlined his proposal.

The roll-forward budget – looking at keeping the exact same programs and services and the exact same number of people next year as this year – would be $177,481,948, an $8.7 million (5.14%) increase due to salary increases that are part of negotiated collective bargaining agreements, changing benefit costs, contractual transportation costs, increased special education services, and inflation.

The budget proposed by Moore Tuesday has trimmed $2.81 million, or 1.66% from the roll forward budget.

Eighty-four percent of the budget is salary and benefits. Salaries are projected to increase $3.37 million or 3.1% in the proposed 2020-21 budget. Benefit costs this year are increasing just 1.7%, Moore said.

The proposed budget preserves “key programs that are vital to the success of West Hartford Public Schools,” Moore wrote in his executive summery. “These include full-day kindergarten, a variety of programs and services to meet the distinctive needs of all learners, a strong commitment to the arts and physical education, world language beginning in third grade, and a broad array of courses to challenge and prepare students for college. In addition, this budget maintains small class size guidelines, the team structure at the middle schools, and counseling support at our secondary schools.”

To provide perspective for the Board, Moore reviewed the district’s current demographics, and how they have changed.

West Hartford currently has a diverse population of 9,397 students enrolled in Pre-K through grade 12. Statistics include: 22% of students speak one of 72 languages other than English at home, 44% are minority, 27% qualify for free or reduced lunch – all of which can increase needs, and expenses, for example English as a second language instruction.

In addition, 13% of the student population requires special education services – 13.8% if the post-secondary students are  included. Just a few years ago it was 11%.

In the past 10 years, while the general inflation increase has been 18%, regular education costs in West Hartford have increased by 23% – due to primarily to the cost of benefits for workers, and the cost of special education has increased 58%.

As an example, he said, in the past five years the district has gone from not having any teachers of the deaf or interpreters to having 11. The district has nine deaf and 58 hearing impaired students – which totals more than the combined number in eight nearby districts that comprise 11 towns and more than 22,000 total students.

West Hartford has become a destination district for special education, he said.

“You look at those costs, that’s a driver,” Moore said. “But I’m okay with that because I really don’t want to spend all my time apologizing to families for delivering to families what they need,” said Moore. That’s what he would want for his own children.

The costs are associated with laws, with the need for outside evaluations, for transportation that may require harnesses, or extra monitors or perhaps nurses, for tuition for outside placements that currently total 86 students whose needs can’t be treated within the district. That number is 17 more than what was anticipated, but it’s the law that children must receive the appropriate education, Moore said. For 2020-21, tuition costs are expected to increase by $680,000.

Having a growing number of students (from 40 last year to 6o currently) involved in the STRIVE post-secondary program helps avoid some outplacements, because it’s less expensive to educate students in the district.

“This year’s roll forward is the second largest since I have been superintendent,” Moore said, driven by a large number of people who have moved into the district since last summer who require special education.

The district has had to add 26 positions, primarily in special education. In addition, salaries have increased in accordance with step and general wage increases negotiated in collective bargaining agreements.

Transportation costs have increased through a contractual escalator and the need for extra buses to transport special education students, and this year the need to contract with CREC for nine extra paraprofessionals at a cost of $450,000.

The good news comes in the area of utility costs, where energy conservation measures have yielded about $170,000 in savings.

Moore said he knew the roll forward budget would never pass, and detailed the reductions that total $2.81 million.

Declining enrollment has led to an overall reduction in staff by 10.5 positions – even taking into account the need to have some extra sections to comply with mandated graduation requirements.

Some resources will be reallocated, Moore said, with department supervisors each teaching a class – saving 2.2 positions – and eliminating having an elementary school principal assigned to central office to help develop the district-wide coding curriculum.

In addition, the ASK program at Hall is being eliminated for 2020-21, Moore said. Jim Solomon has taught the program since its inception decades ago, and while he retired several years ago has continued to help out, but there would only be six kids in the program next year, Moore said. The needs of those students will be accommodated in other ways, he said.

There’s good news regarding benefits, Moore said, and the town has been notified that the estimated increase through the State Partnership Plan is only 2% rather than nearly 7% as shown in the roll forward budget.

Moore said he is happy to have gotten to 3.48% and thought for a long time the requested increase was going to be in the high 4’s. “It took a lot of work to get that number down.”

“West Hartford parents are very demanding … but that’s the way we want it … we want people demanding the best for their kids,” said Moore. “And what we provide, what our teachers provide, what our administrators provide every day is a tremendous eduction for our children.” The budget supports the values that we are going to stand up for every child, and provide them with what they need.

“While educational expenditures are substantially below the state average, we can demonstrate excellent educational outcomes through judicious use of the resources provided to us by taxpayers. Had we spent at the 2018-19 state average, the 2018-19 budget would have been $4.3 million higher than it actually was,” Moore said in the executive summary of his budget presentation. The state average is $17,439 per pupil.

Spending at the same per pupil level as in West Hartford’s comparison group – DRG B – would add $9.7 million to the budget. The DRG B average is $17,979.

“Frankly, I don’t know if I should be proud of that statistic or it’s something I should hide from.” Moore said about being ranked 110th. Forty years ago, West Hartford spent more per pupil than any other town in the state did, and back then there was no free and reduced lunch, and little diversity in the town’s population.

“While our per pupil expenditure ranking is low, expectations from the community for quality programs and services remain high. To meet the high expectations of parents, students and staff, the Superintendent’s 2020-21 budget focuses on maintaining the excellent educational program that we enjoy today,” the executive summary states.