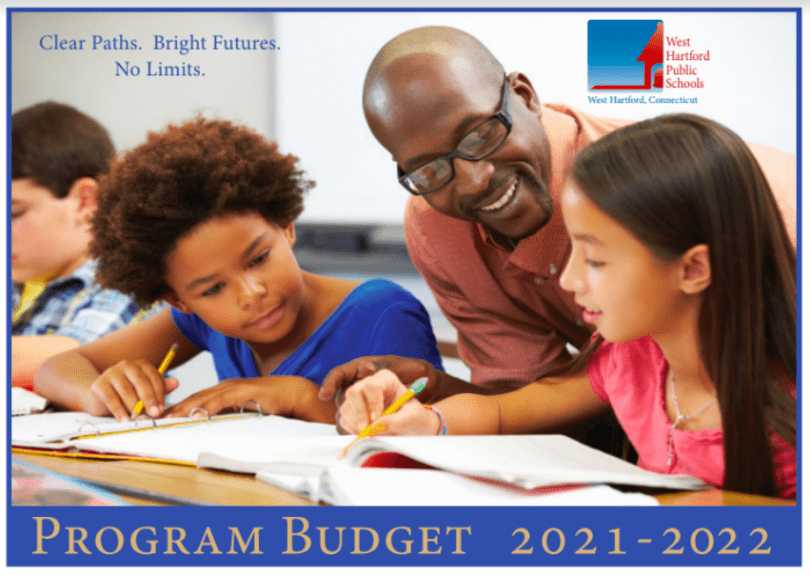 The annual budget season officially began in West Hartford with the presentation of the superintendent’s proposed 2021-2022 general fund budget to the Board of Education during Tuesday night’s meeting, held virtually.

“Every organization’s budget is a window into the soul of the organization,” Moore said Tuesday.

Presenting the budget Tuesday night was somewhat “surreal,” Moore said, because when he did his budget presentation last year it was just days before the pandemic hit with full force and changed everything. In this upcoming budget year, he said, he is hopeful that there will be positive changes.

The roll-forward budget – looking at keeping the exact same programs and services and the exact same number of people next year as this year – would result in a $6.29 million (3.65%) increase due largely to salary increases that are part of negotiated collective bargaining agreements, changing benefit costs, contractual transportation costs, and tuition cost for outplacement.

The budget proposed by Moore Tuesday has trimmed $2.36 million, or 1.37% from the roll-forward budget.

Eighty-four percent of the budget is salary and benefits. “We’re a people organization. … We spend money on the people who interact with our children,” Moore said. 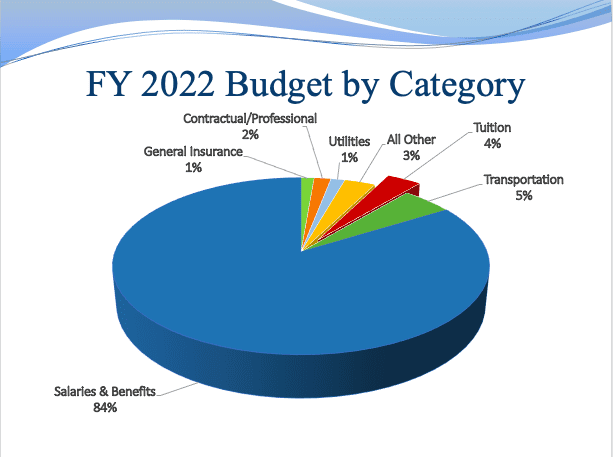 Even with the pandemic requiring the addition of staff, the district has only had to add 3.3 FTE (full time equivalent) positions to the buildings, Moore said. And even needing to hire other staff – funded by federal grants – to run the Remote Learning Experience, the net increase in positions is only 17.

Medical costs this year are increasing by $940,000 (4.16%) due to premium increases in the State Partnership Plan rates. Moore said that’s a positive story, because the increases are far less than medical trends.

Other benefit cost increases of $520,000 are driven by $320,000 more that the Board must contribute to the town’s pension plan, as well as increased long-term disability premiums and social security costs that rise along with wages.

One of the biggest pieces of pie (shown in red above) is tuition, which has gone from being 3% of the budget to 4% of the budget. The total tuition expense is a large budget driver, increasing by $1.02 million (19.59%). The number of students requiring outplacement has increased by 20, Moore said.

Tuition rates for outplacement are higher, and the state caps reimbursement. “When we outplace a child, we are responsible for the first 4.5 times of our net current expenditure per pupil,” Moore said, which is $80,109 per student. Some outplacements can cost in the hundreds of thousands of dollars, he said, and while everything more than $80,109 should be 100% reimbursed by the state, that percent has dropped continuously since 2017-18, and this past year the district received 71% of that reimbursement.

West Hartford is not alone in facing this shortfall, Moore said, but there are a large number of students requiring outside placement, which the public schools are obligated to provide.

Transportation costs are up $530,000 (6.02%), which includes an escalation of 3% built into the contract that runs through 2023, and the cost of additional buses, particularly for special education needs. The cost of transportation for outplacement students is included as well.

In the “other” expense category, there are some savings. Utilities have gone from 2% to just 1% of the budget. Although the HVAC systems are being run more, evaluation of those systems last fall resulted in greater efficiencies.

The proposed budget Moore is asking the Board of Education to consider is $2.36 million less than the roll forward budget would be.

“We’re not going to go forward with that roll forward budget because we have some shifts,” he said.

Enrollment shifts have resulted in an overall reduction of 11.3 FTE positions for a reduction of $1.66 million. The smaller cohorts are reaching the middle schools and will result in a reduction of teams at both King Philip and Sedgwick, and Bristow’s planned reduction to 105 students per grade.

There are, however, plans for two more elementary school sections next year, and there is a strong possibility of an increase in kindergarten enrollment, Moore said.

An additional speech and language pathologist and psychologist are needed – and those positions ($170,000) are part of the district’s basic operations and therefore not eligible to be paid for through the ESSER II (Emergency and Secondary School Emergency Relief) funds the district will receive for COVID-19 expenses.

The budget includes $130,000 to support the commitment to equity. “We live it and we need to spend money on it,” Moore said. The funds are for a family services liaison and half of the expense of an outreach coordinator.

Non-classroom changes to staffing will result in a reduction of $240,000, largely because positions are remaining unfilled.

Overhead reductions, including utilities and general insurance, total $760,000. The remaining $400,000 from the non-lapsing fund account will be applied to transportation expenses, Moore said.

Moore provided the Board of Education with a comprehensive State of the Schools report at the previous meeting, and Tuesday he highlighted some of those facts as he presented the proposed budget for the next academic year. 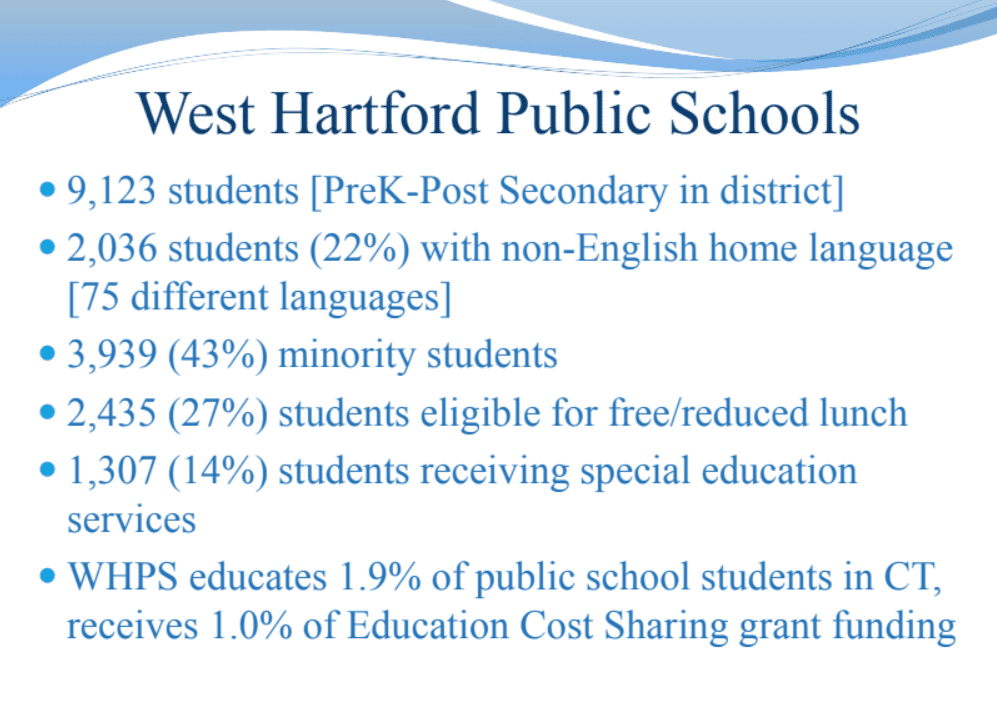 The district serves students from Pre-K (age 3) to those who are 22 and enrolled in the post-secondary program. There are 75 different primary home languages spoken, representing 22% of students. “That’s one of the great things about raising your children here,” Moore said.

West Hartford Public Schools is the 10th largest district in the state, and while the district educates 1.9% of the state’s public school students, it receives only 1% of the Educational Cost Sharing (ECS) funds. The decision to flat fund ECS has created a reduction in expected funding of $280,000 in the next fiscal year and $860,000 over the next three years, Moore said.

With a net current expenditure per pupil of $17,802, West Hartford was most recently ranked 102nd among schools in the state in per-pupil expenditures, a rebound from being as low as 130th.

During the 1970s through mid-1980s, West Hartford was among the top 10 in terms of per pupil expense.

“I’m not ashamed of 102nd. I think what we deliver it shows the efficiency with which we operate,” Moore said.

If the town spent as much per pupil as its reference group (see chart below), that would increase the budget by $6.4 million this year, and having spent at that level over the past five years would have resulted in a cumulative cost to taxpayers of $52.4 million.

Spending at the state median would add $4.2 million to the budget, or $34.4 million cost to taxpayers over the past five years. 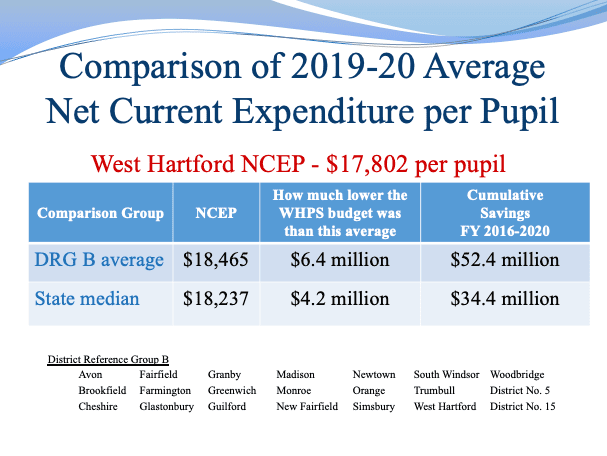 “I take it very seriously how the citizens of West Hartford come forward to support our schools,” he said. And the district will “do what we can to uplift their children, to educate their children, to make sure they’re ready for the world that they’re going to enter,” Moore said.

He thanked Liz Hewitt, director of Finance and Planning, as well as the rest of the staff for their work preparing the budget.

“I presented something to you as something I do believe continues our mission of clearing paths,” Moore told the Board. “I think it’s the best I can do.”

Other news from the superintendent

Moore shared some other news Tuesday night in addition to the budget.

By the end of the weekend, more than half of the West Hartford Public Schools staff will be fully vaccinated against COVID-19, he said, sharing the news that the Health District has received 725 doses of the single-dose  Johnson & Johnson vaccine that will be administered at clinics on Friday and Saturday.

He said an announcement will be forthcoming next week about plans to transition from hybrid to full in-person school later this month. The exact date is still being determined because it needs to accommodate conference schedules and school day SATs.

“I really hope this will be a special spring for our kids,” Moore said.

“We’re actively planning for our graduations to be at both of our high schools,” Moore said. “There are signs of hope everywhere. I think there’s a lot of reasons to be excited.”