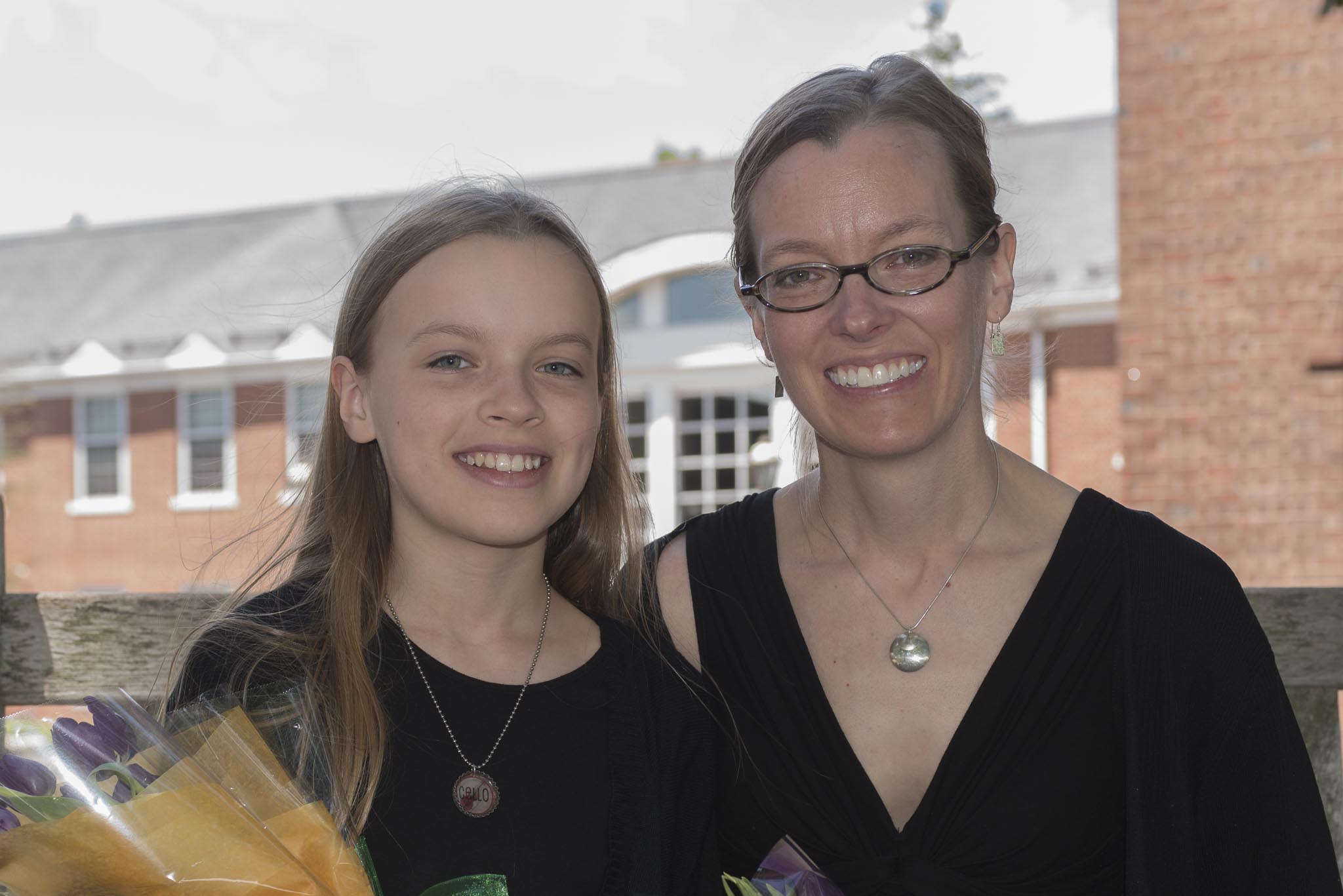 Maggie (left) and Alex Slap both loved the opportunity to share the stage at the WHSO's June 12 concert. Photo credit: Corwyn Miyagishima

Several groups of family members have played together as members of the West Hartford Symphony, but at the annual picnic concert on June 12, Alex and Maggie Slap became the first mother-daughter combo. 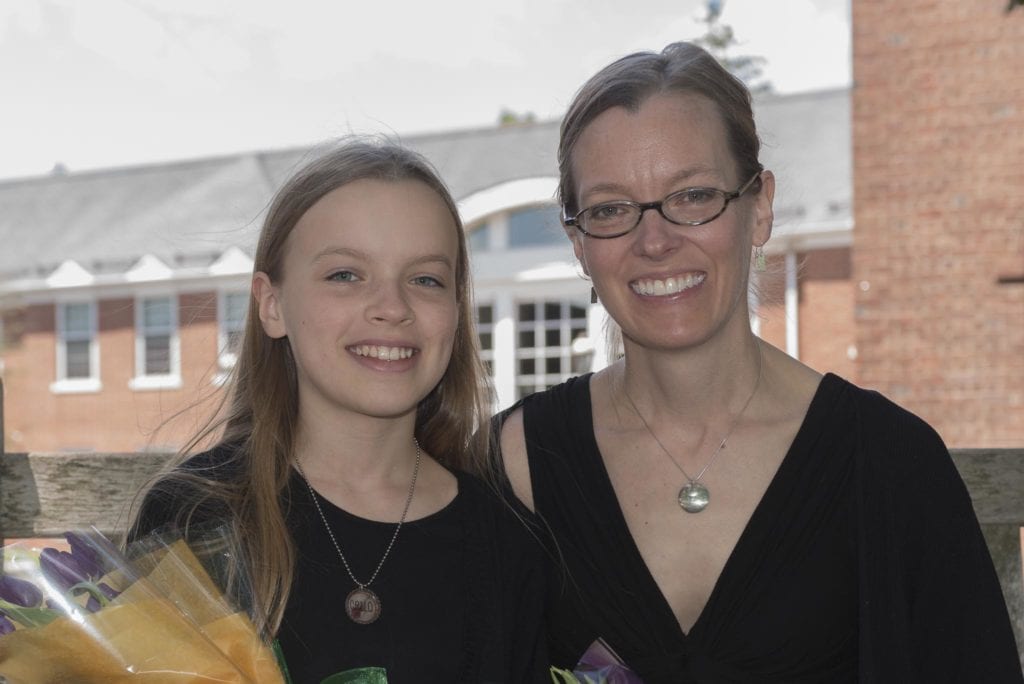 Maggie (left) and Alex Slap both loved the opportunity to share the stage at the WHSO’s June 12 concert. Photo credit: Corwyn Miyagishima

West Hartford resident Alexandra Slap has a degree in music, has performed countless times, and taught flute for 15 years. But in June, music took on a new dimension for Slap as she shared the West Hartford Symphony stage with her 11-year-old daughter, Maggie. 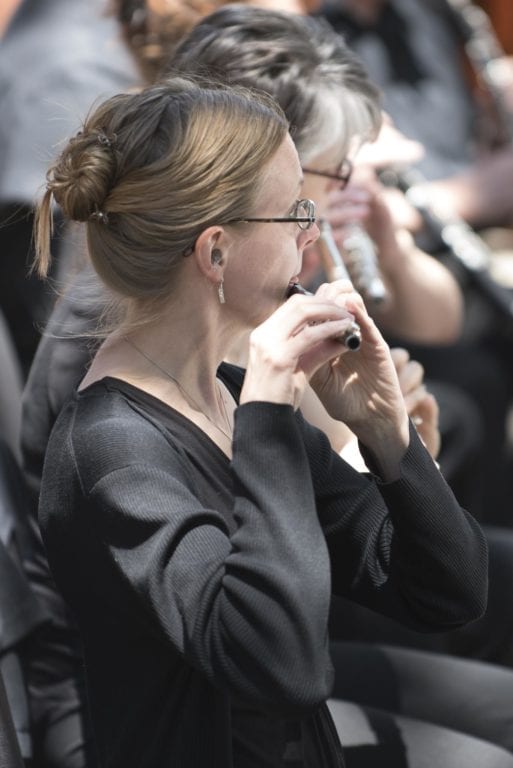 Flute has always been Alex’s primary instrument, but last year she met West Hartford Symphony Orchestra (WHSO) Music Director Richard Chiarappa and learned of the orchestra’s need for a substitute piccolo player. Alex jumped at the chance, and appeared in all of the WHSO’s concerts for the 2015-16 season.

Alex said she happened to mention to Chiarappa that her daughter was studying cello with the same teacher as Kai Vestergaard, a 13-year-old cellist with the WHSO. “He’s always so open to bringing in students, and agreed to give her a try for the picnic concert,” Alex said.

It happened really quickly, and Maggie had less than two weeks to prepare for the concert. She was admittedly “a little scared” about learning all of the music in a week and only being able to attend one rehearsal.

“I was really thrilled to be playing with this orchestra. The music is much different, and I really like it,” said Maggie, who studies at the Hartt School and plays in the Sedgwick Middle School orchestra and with Sedgwick’s selective First Strings group. She will be a seventh-grader at Sedgwick in the fall. 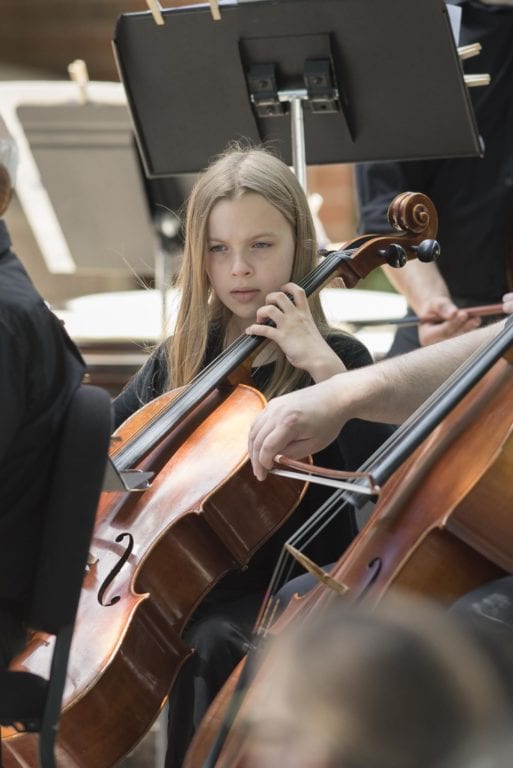 11-year-old Maggie Slap had the opportunity to join her mother, Alex, playing in the WHSO’s picnic concert on June 12. Photo credit: Corwyn Miyagishima

Alex said she was filled with “unbelievable pride” that she and Maggie were given the opportunity to play together with the WHSO.

“I couldn’t believe I would look over there and see my little Maggie,” Alex said. She couldn’t stop smiling when she had breaks in the music and saw Maggie “bowing” with the other cellists.

Chiarappa said that at 11, Maggie shares the distinction with Kai Vestergard of being the youngest WHSO performer. The Slaps, he said, are the first mother-daughter combination, although there have been father-son, father-daughter, mother-father-son, and sibling combinations. Kai’s older sister, Mai, is a violinist with the WHSO.

The bond, and pride, on behalf of both Slaps was “just wonderful to see,” Chiarappa said.

As conductor, Chiarappa stands in the triangle between the Alex on his left on piccolo and Maggie on his right. During rehearsal, he noticed Maggie looking up at her mom with love and pride, Chiarappa said.

“At the concert, I’m watching Maggie. She would look at her mother with a quick glance and then look at me,” said Chiarappa. Alex’s pride for her daughter was also clearly visible.

“It was a mutual admiration society – a real love fest,” said Chiarappa.

Chiarappa said he enjoys having young members in the orchestra. “They just bring such exuberance, energy, and enthusiasm. It helps the adults and the experience of the adults wears off on the children.” There is a wide range of ages among WHSO members, Chiarappa said. The oldest, at 82, is a retired brain surgeon.

Alex said that although she has always played flute, she wanted to encourage more variety in the household. “I’ve always been so jealous of the string quartet repertoire, and felt so left out. Composers wrote such great things for that ensemble,” she said. At age 4, Maggie decided she liked the sound of the cello, and she’s studied it ever since.

Although still technically a substitute, Alex is already slated to play piccolo in the 2016 fall and holiday concerts because piccolo player Linda Latimer is teaching a course on practice nights. Playing the piccolo has really helped her grow as a musician, Alex said, and she has spent hours practicing. “The sound really cuts through because it’s so high-pitched,” Alex said, joking that her family has to run through the room when she’s playing. She, like many piccolo players, wears one earplug to practice.

“It was one of those ‘oh my goodness’ moments. I couldn’t believe I was playing with my daughter in an orchestra,” said Alex.

“It’s such a great community orchestra,” Alex said. “It’s really for people who have musical skill but no place to give it. Everyone is there because they love it.”