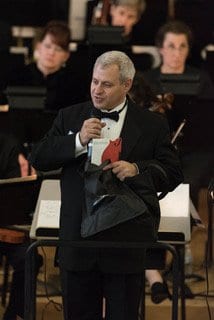 Ron Reisner’s final show on May 19 will honor his legacy to the West Hartford Symphony Orchestra and our veterans.

Communities that benefit from their own symphony orchestra receive far more than the opportunity to enjoy classical music. These cities and towns play a critical role in passing down an appreciation for the arts, which raise spirits and increase the quality of life.

That’s exactly what the West Hartford Symphony Orchestra (WHSO) has been doing for the last 16 years. Since WHSO’s inception in 2001, Musical Director Richard Chiarappa and the orchestra have been performing classical and pops for West Hartford and audiences across the state.

Many residents and concertgoers enjoy performances at West Hartford Town Hall or Kingswood Oxford’s Roberts Theater, but most aren’t aware of the “quiet concerts” that bring classical music to all generations across the community. For example, each year, WHSO performs a children’s concert for over 750 fourth graders, introducing them to classical music and inviting the children onstage to experience individual sections of the orchestra just months before they choose the instruments they will study in school. WHSO musicians also bring music to The McAuley Retirement Community and other venues across the State. 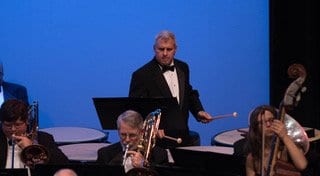 This Saturday will mark a new milestone in WHSO’s history: Ron Reisner, timpanist, principal percussionist, and opresident of the West Hartford Symphony will be performing his final concert on May 19, 7 p.m. at West Hartford Town Hall as WHSO ends its 16th Season with an “Armed Services Day Celebration of the Pops!” For the last 14 years, Ron’s spirit and passion for West Hartford music has helped drive the orchestra’s success through his constant community support for WHSO and belief that all benefit from the symphony.

As an area performer, Reisner’s talents extend far beyond WHSO. A graduate of Bradley University in Peoria, IL, Reisner has studied at the Hartt School of Music since preschool and throughout the years under percussion teacher and author Michael LaRosa and former board member of the Percussive Arts Society’s Rosemarie Small. Reisner has performed with community theatre across the region and in off-Broadway orchestra pits as well as numerous rock and jazz groups. He is also the principal percussionist for the Beth El Symphony Orchestra and a percussion teacher and mentor to many.

As Reisner prepares to move to South Carolina this summer, WHSO will transition to new leadership with the confidence that he has left the organization far better off than when he joined in 2004.

In many ways, WHSO’s Season Finale will be a West Hartford Celebration of Service.  In addition to recognizing Reisner’s service to the arts, the Symphony will be honoring local veterans in conjunction with Armed Services Day.

Special guest and honoree will be Benjamin Cooper, a 96-year-old WWII veteran who helped liberate the Dachau concentration camp in 1945.

Musically, this will be a concert to remember as the WHSO also celebrates the pops and the 100th Birthday of Leonard Bernstein.

Tickets are available at WHSO.org or by requesting by email at [email protected].