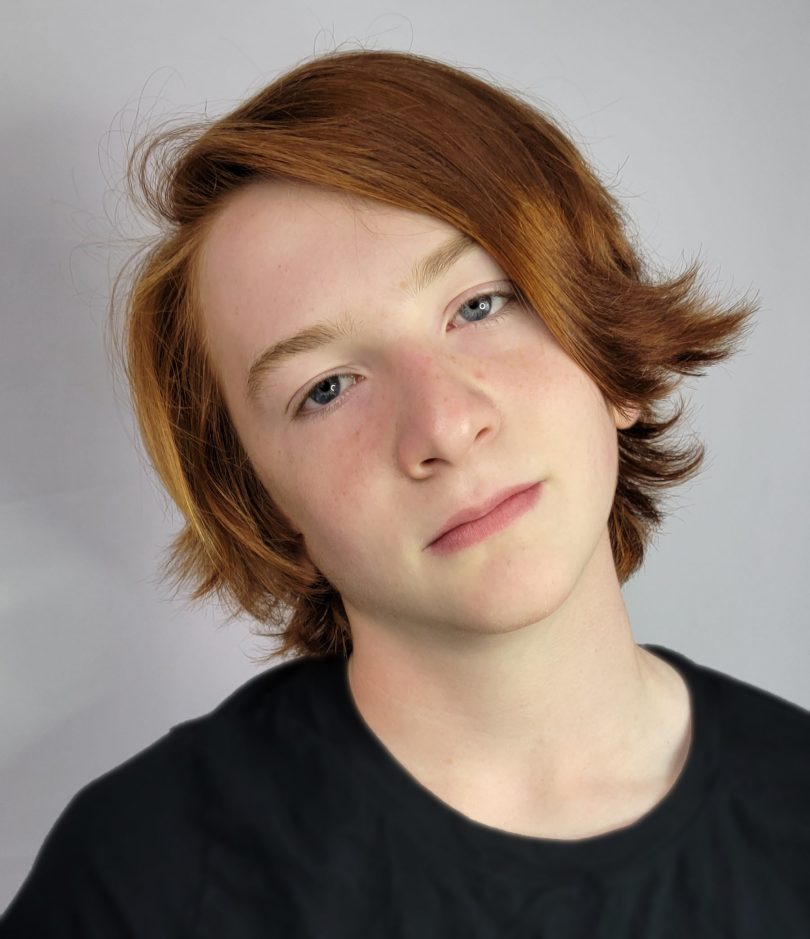 Flynn Lantz said he feels energized when he’s acting. “I get a surge of adrenaline,” he said. “I’m nervous before but happy after. I like pretending to be someone else – I like to put myself in different shoes.” Photo by Stefanie Marco

At 15, West Hartford resident Flynn Lantz is making his mark as an actor and model.

Flynn Lantz plays a scout in The Legend of Two Pines. Here he is being directed in a shot behind the scenes. Photo by Stefanie Marco

Start small, work hard, but have fun along the way. That’s how Flynn Lantz is living these days. At 15, the actor, model, and Hall High School freshman finds time to do it all, including his latest role, in a national commercial for a major social media outlet.

Flynn said he feels energized when he’s acting. “I get a surge of adrenaline,” he said. “I’m nervous before but happy after. I like pretending to be someone else – I like to put myself in different shoes.”

Tina Kiniry, Flynn’s manager and agent at John Casablancas CT, has worked with him since 2019 and thinks Flynn has that spark that’s needed to make it in show business. 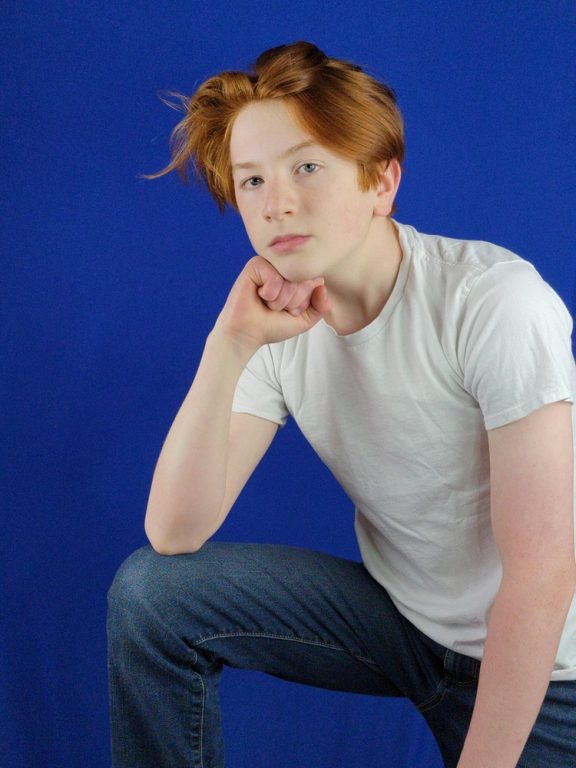 Flynn Lantz has just finished filming a national commercial for a major social media network. It’s a big deal to get a job this big, according to his agent, Tina Kiniry. Photo by Stefanie Marco

“He has a great attitude and an excellent work ethic,” she said. “He loves the work and he’s willing to put the work in to get there. I really enjoy speaking with him and his parents. They are all really down to earth.”

It’s important for anyone who is a minor to have flexible and caring family members, she added. “When you’re under 18, you have to look at the whole family,” she said. “Are they willing to support his career? Can they be available to take you to castings?” The Lantz family, including his parents, Carl and Stefanie, and older sister, Callie, meets that criteria.

Then there is Flynn’s look and talent. “He’s super outgoing and he loves the craft,” Kiniry said. “He has a unique look and the camera loves him. He has amazing energy and a great work ethic.” 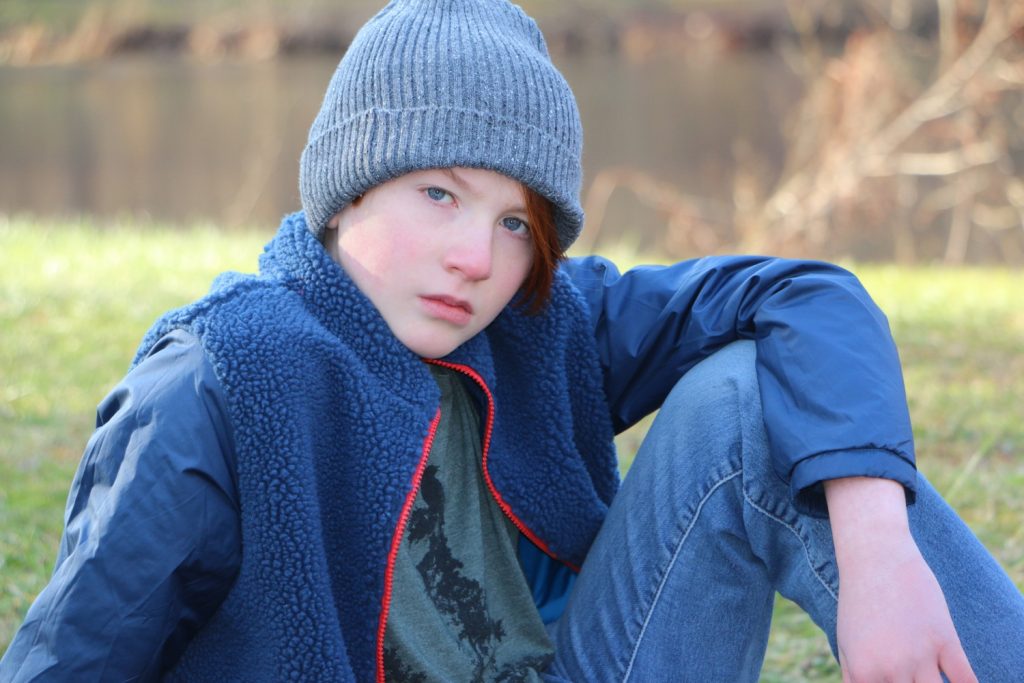 Flynn tried modeling when he was 7, doing a shoot for a textbook. “Then I took a break,” Flynn said. A few years later, “I got more into acting. I took a few classes and I did the play ‘Alice in Wonderland’ at the Playhouse on Park. I was the caterpillar. I liked that and wanted to do more. I was enjoying it.”

He started modeling, he said, “Because my sister did a little modeling and I was a little jealous of what she was doing. I wanted to be more successful than her.”

Since 2020, he’s been an extra in some impressive productions, including the Netflix film “Mr. Harrigan’s Phone,” based on Stephen King’s novella of the same name, starring Donald Sutherland and Jaeden Martell, the comedy/drama film “The Holdovers,” starring Paul Giamatti, and the horror film “She Came From The Woods,” starring Cara Buono and Willian Sadler.

Flynn’s first speaking role on television was as an abused child in the television series. “Evil Lives,” about a religious cult and a madman in the cult who abuses children. I was one of the kids who got whipped,” he said.

“You have to take a shot,” Flynn said.

Flynn’s first premiere was for the award-nominated short film, “The Legend of Two Pines.”

“I had a way bigger part in it,” Flynn said. “I played a scout named Simon. It’s mystery and sci fi, about an alien in the woods. I worked on it for one day – the whole film was shot in 14 days. We started filming at 3 a.m., and finished at 9 a.m.”

Flynn doesn’t seem to mind the hours and according to his father, works hard. “He and his mom (Stefanie Marco Lantz) are both dyslexic. It’s harder to read and makes memorization tougher. He’s the hardest working kid in show business.”

Along the way, Flynn’s met a “lot of nice people, like Bill Sadler,” who chatted with Carl and Flynn for an hour. “He was showing us pictures and sharing advice,” Flynn said.

He also enjoyed talking with William Russ, an actor from the popular television show, “Boy Meets World. “He gave me a lot of advice. He was very friendly,” Flynn said.

Landing the social media commercial is a big deal, according to Kiniry. “Keep your eyes open for more great work from Flynn. I’m excited to work to help him,” she said.

When he isn’t acting, Flynn also works hard at his schoolwork, and is on the indoor track team at school in the winter and the tennis team for Hall in the spring.

“Flynn always wants more,” Carl said. “It’s the little things that lead to big things, and you just have to hope to have some fun along the way.”

Flynn agrees that he enjoys acting. “I always have fun filming. I could see this as a career.”

A version of this story originally appeared in the January 2023 issue of West Hartford LIFE.