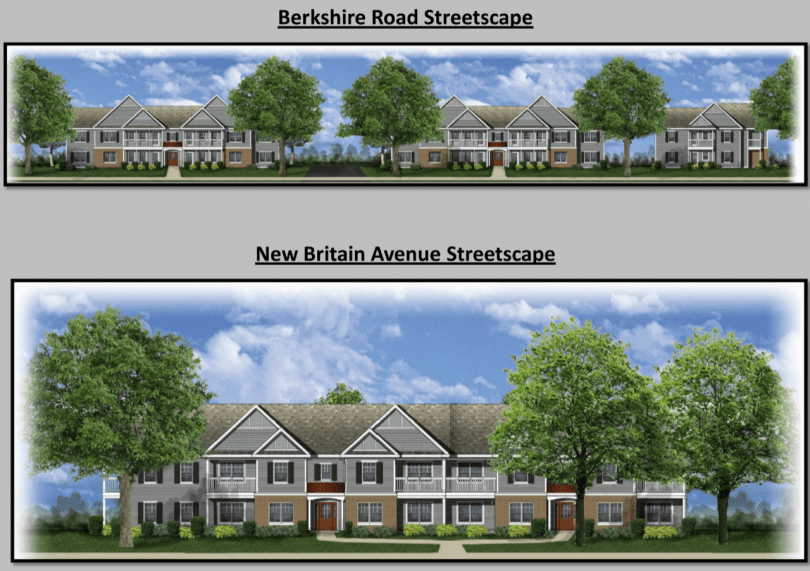 By a vote of 5-4, the West Hartford Town Council voted Wednesday night against a proposal for a 26-unit apartment complex at the intersection of Berkshire Road and New Britain Avenue.

West Hartford Town Council members spent more than six hours conducting a public hearing – over the course of two nights – listening to the applicant and receiving testimony from residents regarding an application by 47 Pratt Street LLC to develop Berkshire West at the intersection of Berkshire Road and New Britain Avenue, and ultimately voted 5-4 against the project during the Council meeting that followed the second hearing.

Corporation Counsel Pat Alair said Wednesday that a petition had initially been submitted in protest of the project at the initial hearing in June, but at that time there were not enough to trigger the requirement of a super-majority vote for approval. He told We-Ha.com that since then, additional signatures had been submitted by residents whose homes are within a 500-foot buffer of the property, and that because at least 25 percent of all of the homeowners were protesting the zoning change, a super-majority of six Town Council members would need to vote in favor to approve the project.

Alair told the Council on Wednesday night that depending on how the rule was interpreted – whether or not the roadway was included in the definition of the 500 feet – there were either 37.37 percent or 27.85 percent of homeowners who had signed a petition against the project. “Either way it’s over the 25 percent threshold,” he said.

When the application came to a vote Wednesday night, the three Republicans on the Council – Minority Leader Chris Barnes, and councilors Mary Fay and Chris Williams – provided their comments first, indicating their plans to vote against the project. All received enthusiastic applause from the crowd.

When Council member Leon Davidoff stated that he planned to vote against the project, applause once again broke out in the audience, and the neighbors knew then that the project would not move forward. Democratic Councilor Liam Sweeney also voted against the application, while Democrats Ben Wenograd, Dallas Dodge, Deputy Mayor Beth Kerrigan, and Mayor Shari Cantor voted in favor of it.

The public hearing first began on June 26, and reconvened Wednesday night. Although the public comment portion of the hearing had already been closed, approximately 40 area residents showed up at Town Hall to listen to the applicant’s responses to issues they had raised and to hear responses to other questions that Council members raised.

Cantor said that since the initial hearing, many emails had also been received regarding the project, and had been shared with all Council members.

More than 20 residents had given testimony at the June 26 hearing, which lasted from 6:30-10:45 p.m. before the Council closed public comment and stated that they planned to reconvene the hearing on Sept. 12 on the request by 47 Pratt Street, LLC to change zoning from R-6 single-family to RM-2 multi-family and designate a 1.7-acre parcel at the intersection of New Britain Avenue and Berkshire as a Special Development District in order to construct a 26-unit multi-family residential development to be known as Berkshire West. The property is comprised of seven parcels located at 1340 and 1344 New Britain Ave. and 8-16 Berkshire Rd.

On Wednesday night, the applicant responded to questions about traffic, and Kevin Solli of Solli Engineering said that he had gone back out and conducted traffic studies once school was back in session, and that despite the additional traffic generated by nearby Conard High School, the intersection of Berkshire and New Britain Avenue could handle it without much impact.

Attorney Robin Pearson of Alter Pearson, LLC, who represented the applicant, addressed concerns about safety, and said that having just one driveway on Berkshire would be much safer than six or seven driveways if single-family homes were built there. She said that the setbacks for the buildings and the amount of green space would be greater, more trees would be preserved, and the buildings would be lower than what is permitted for single-family development. Lighting would shielded, and fencing would separate the project from abutters.

Pearson also addressed concerns raised about renters vs. owners, and cited examples of successful rental properties in West Hartford like 243 Steele Road – which was approved by the Town Council despite the protests of 400 residents – and the Tannery in Glastonbury, noting that the residents of both are largely Millennials or empty-nesters, and have high incomes, and very few children to add to the school systems.

Pearson also noted that the developer and property owner, Joe Calafiore – who is also a West Hartford resident – was willing to provide a property value guarantee to Berkshire Road resident Glen Baldi, whose house directly abuts the property to the north and who expressed concern that it would diminish the value of his recently-purchased home. Baldi declined the offer, and continued his opposition to the project.

Davidoff said he has considered at least 100 zoning applications, and for each one uses the same criteria, although in this case it was subjective criteria. One criterion was whether or not the project is in harmony with the area. In the application, however, the applicant themselves stated that what you would find in this neighborhood is predominantly single-family homes, Davidoff said.

“Are there any better alternatives? What would be better than this multifamily three-building apartment complex?” he said. 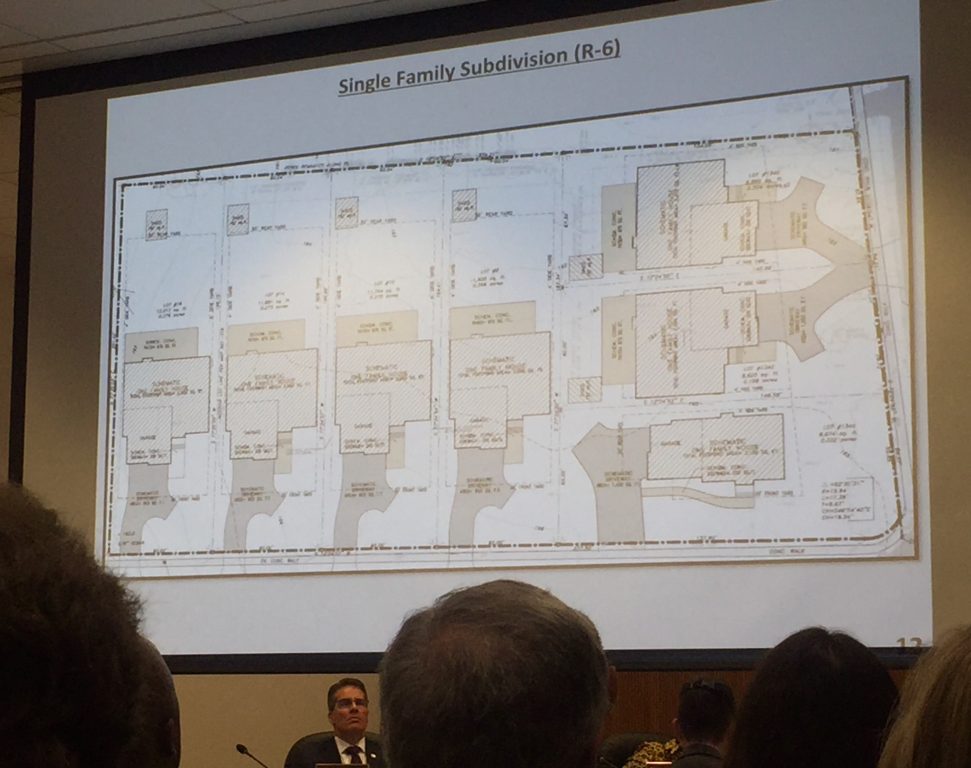 Schematic for seven single-family homes that was previously approved for the intersection of New Britain Avenue and Berkshire Road. Photo credit: Ronni Newton

“I thought long and hard about this,” Davidoff said. “Zoning gives people a sense of certainty – the abutter to this recently purchased his home and had the expectation that there were going to be homes like his next to his home.” Davidoff said that if Baldi had looked into it, he would have found that the Town Planning and Zoning Commission (TPZ) had approved a development of seven single-family homes.

During the public hearing, Davidoff had asked Pearson whether or not economic feasibility was a consideration, and said for him it’s really not.

Pearson said that the development would generate about $118,000 per year in tax revenue to the town. If a single-family development of seven homes, that had been approved for the land by the TPZ in 2016 were to be built instead, it would generate about $84,000 per year. The developer who planned to build the single-family homes walked away, Pearson said, once he realized that the cost of extending the sewer line on Berkshire Road made the economics of the project infeasible.

“In my opinion $34,000 is significant but not enough to sway me, but it’s really about maintaining expectation with respect to the zoning laws … the burden is high and for me the standard is high,” Davidoff said. He added that he had visited the site three more times and each time he came to the same conclusion that single-family homes are the best use for the land and that the applicant did not meet the burden of convincing him that a zoning change to multi-family was “in harmony.”

In his comments, Barnes quoted something that former town manager Ron Van Winkle had once said: “Zoning laws protect residents and residents rely on zoning.” He said that he was not convinced that the proposal was in harmony with the residential neighborhood, and that those who purchased their nearby homes, believing that the property in question was zoned for single-family occupancy, should have that preserved.

Williams echoed those comments, noting that “some of most compelling testimony is that people purchased homes in reliance of zoning that currently stood.”

Council member Ben Wenograd said that it was a close call and a really good debate, and that although he agreed with many of the points his colleagues made he chose to vote in favor of the project. “It’s a balance –what is best for a particular location as well as what’s best for our entire town … People who live closest have a much bigger stake … and we also can’t ignore the wishes of a bigger community that looks for the greater good,” he said.

Wenograd, who lives just off Farmington Avenue where there is extensive rental property, said that a mix of housing is beneficial, and that renters are part of the vitality of the area. He said that he believes New Britain Avenue and Elmwood “would be enhanced by this project.”

Wenograd said that he believes “that there is a higher burden to change zoning,” but added that the seven single-family homes that were approved could be much worse with seven separate driveways, and that led him to believe that a zoning change was appropriate.

Cantor spoke last, and said that based on the intent expressed by her colleagues she knew the project would be denied. It was a tough decision to make, she said, and the decision made was really about the zoning, and not the specifics of the particular application.

“I’m not sure single-family is going to work on this parcel,” Cantor said. “I struggle with the zone change being a different use – it is a different use but … multi-family use really important in our world today,” and noted that just because someone rents doesn’t mean they don’t consider a space their home. “The impression that renters are different kind of people or don’t feel that it’s their home that is not what I’ve experienced,” she said.

Regarding the residents who expressed their opinions about the project, Cantor said, “I think they believe in their neighborhood. … This is a very special neighborhood.”

Cantor said that from her perspective it’s important that the town stay vibrant and vital. “You live in a gem of an area, and I thought it was important that we expand that area,” she said.