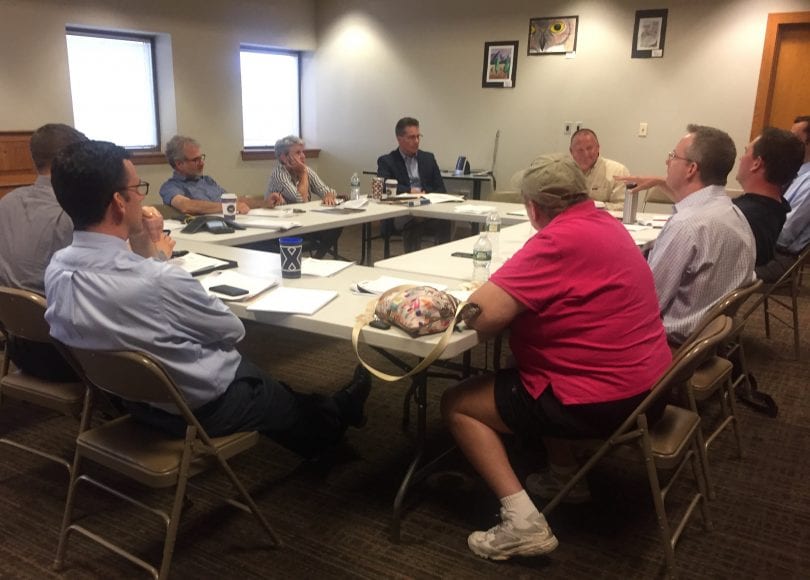 Director of Public Works John Phillips (back row, at right) meets with the Town Council's Community Planning and Physical Services Committee on Thursday to present his report on SMART. Photo credit: Ronni Newton

The entire report is included in PDF form below.

Following Thursday night’s discussion, Committee members decided that they are not quite ready to recommend bringing the program to the full Town Council for a vote, and will have one more meeting later this summer to discuss issues like a calendar and what data points would be used to gauge the program’s success. 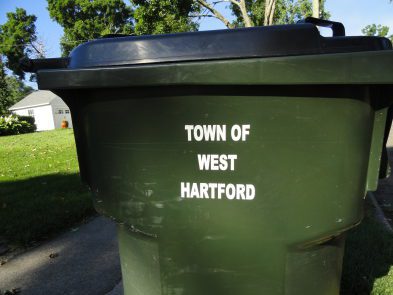 Town Manager Matt Hart told We-Ha.com after the meeting that depending on what happens at the next Committee meeting, the program may move to the full Council for discussion and vote in the early fall. If the program were to be approved, the implementation schedule would then be set.

Phillips said he has spent several years studying SMART as an option for bringing West Hartford into compliance with the state’s goal of diverting 60 percent of solid waste by 2024 (the town’s current level is 26.6 percent), as well as keeping the town’s costs under control as waste management expenses continue to increase. SMART has been actively under discussion with the Council since early 2016.

In January 2017, more than 100 people attended a meeting at Town Hall to be educated about a potential SMART program and how it might impact them.

“A SMART (Save Money and Reduce Trash) program is a solution that reduces trash, reduces disposal costs, and gives residents more control over their budget than fees or tax increases,” states the Executive Summary of the report Phillips presented to the Committee on Thursday.

SMART would turn trash into a utility cost, with unit-based pricing. Residents would purchase a 30-gallon municipal waste bag or a smaller 15-gallon kitchen-sized trash bag, at a cost to be determined, and anything that goes into the green trash barrel would first need to go into one of those bags. Residents who have more trash would fill more of the municipal bags, but curbside collection would not otherwise be changed.

Residents would be able to purchase the official bags at a variety of local vendors including grocery and hardware stores.

“I’ve studied this, looked at it from every which way,” Phillips told the Committee on Thursday. He said he lives in a town where he has to personally contract for trash collection, at a cost of $400 per year, and thinks that he would save money if his town offered a SMART program.

“I understand that garbage is a very intimate issue,” Phillips said, and he said he also understands that moving to the program would be “a monumental decision and a huge shift in behavior.” At this point in time, with the rising cost of waste disposal, the potential that solid waste will have to be transported out of state due to maxing out of the state’s facilities, and the requirement for greater diversion, he believes there are no better solutions to protect the town from huge cost increases.

Based on results from other communities that have implemented SMART programs, Phillips believes the the town’s waste generation will be reduced by 40 percent – from about 19,000 tons per year to about 11,400 tons per year. The resulting savings in tipping costs would be about $560,000, and the sale of the specialized bags – based on a cost of $2.00  for the large bags and $1.25 for the smaller bags – would also generate about $1.66 million. Even with the cost of equipment needed to identify non-compliance, the net benefit is estimated at $2.2 million.

It would be up to the Town Council to determine the use of those savings, with options including enhancing yard waste collection – which would further reduce tipping fees or allocation to other Public Works uses. Savings could also be used to reduce the mill rate and thereby reduce residents’ property taxes.

Committee members discussed whether or not the program, if implemented, should actually be called a “pilot” since it will involve the entire community and not just a segment. They also expressed concern about educating the public and awareness that many people will not see this as a cost saving.

Minority Leader Chris Barnes said the program should be viewed as a pilot and “forward thinking.” While he said he’s not sure that he can support it, “I think I can,” he said. “You’ve done the work,” he told Phillips.

Dallas Dodge said he has not yet decided if he could support the program and asked Phillips what other alternatives exist. Phillips said that options are doing nothing and dealing with potentially rapidly escalating costs and an uncertain future for disposal capacity, or removing trash collection as a town service and having residents contract for trash removal personally, either individually or through a franchise system.

Through SMART, the town still would hold the contract, Phillips said. “Why I like the bag program is that nothing changes in your life. You go to the store and buy the bags,” he said. The number of bags you buy is determined by your own consumption, making trash like a utility, and it’s really the only way to do that because weighing the trash at the curb is not feasible, he said.

“You buy the bag, you put your trash in it, it goes away,” said Phillips. “It’s a consumer decision.”

“My concern is we’re taking a baby step, but can we take a leap to the future?” asked Deputy Mayor Beth Kerrigan. “Why can’t we go right to the food waste?” she said, noting the success of an trial program held late last year with several hundred households.

There was also discussion about perhaps providing residents with some free bags to start off the program.

Although organics recycling would potentially have a large impact on the volume of solid waste, and the trial was successful, Phillips said that the capacity for large scale organic waste recycling is not yet available.

Several other issues were discussed – including whether or not SMART, if approved, would be called a pilot. Town Manager Matt Hart said that no matter what it is called, data would be analyzed to determine whether or not objectives were being met.

Phillips said the next step will be issuing an RFP to hire a company to verify the assumptions that have been made, to confirm estimated costs of start-up and compliance monitoring as well as revenue projections, and establish a rollout plan including procuring bags.

In his report, Phillips also recommended creation of a Citizen Advisory Committee, appointed by the Town Council, if the program is launched. That Committee would meet quarterly to review the program and make a recommendation at the end of the 18-month pilot period, if that is how the implementation is handled.

“If it’s not coming together there should be a sunset,” Phillips said. “If it’s working then nothing will be needed.”

The conclusion of Phillips’ report notes that diverting more waste would have a positive financial impact, especially as tipping fees are expected to increase. “At the departmental level alternative programs have been explored including educating the public of the benefits of a SMART program, offering weekly recycling, and providing an experimental food waste collection program. Organics collection has been added at the schools. Tools have been provided to the public including a waste wizard to help with recycling questions, an enhanced website, a restructuring of the yard waste and recycling permit process and added more options to recycle including electronics collection, mattress collection, and paint collection.”

Continuing to expand recycling will also provide opportunities to divert more materials from the waste stream, and the SMART incentivizes participation in those programs.