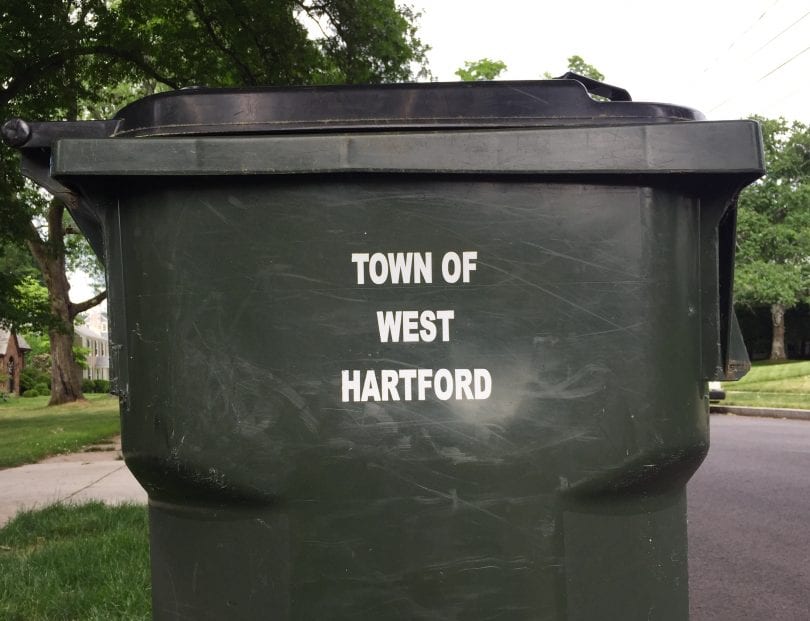 The West Hartford Town Council’s Community Planning and Physical Services Committee recently received a recommendation to pilot a ‘Save Money and Reduce Trash’ (SMART) program, but Mayor Shari Cantor said there are no plans at this time to bring it to the full Town Council for vote.

West Hartford Mayor Shari Cantor said that while it’s critical for the town to stay ahead of a trash crisis that is likely to have serious impact on the entire region in the next few years, and there is need to comply with the state’s goal of diverting 60 percent of solid waste by 2024, the town will continue to explore options and there are no plans for the Town Council to address a single solution in the near future.

At a meeting of the Town Council’s Community Planning and Physical Services Committee on June 14, Director of Public Works John Phillips presented a 17-page report, recommending an 18-month pilot program for “Save Money Reduce Trash” (SMART) as the best solution for reducing West Hartford’s solid waste.

SMART – a “pay as you throw” program – is a proven method of reducing municipal solid waste output, but the message that many in the community heard was that this was a done deal, that the Town Council would implement the program with the goal of increasing revenues to the town through the sale of special bags for disposal of trash.

A firestorm was ignited on social media, and a poll asking residents what they think of West Hartford’s “recommended trash disposal program” fueled even more negativity. “Why would you want to pay more for trash disposal?” Cantor asked.

“There is a lot of misinformation out there,” Cantor said. “We’re in the informational stage and looking at our options.” The report on SMART was made to a committee that includes just three members of the Town Council. The committee does not have voting authority, but can make recommendations to have an item placed on the Town Council agenda for consideration.

“We are talking about whatever our options are. We do need to engage the public. We want to educate. We don’t want to scare people. There’s more to follow. There is more work ahead of us,” Cantor said.

At its root, this is an environmental issue.

Phillips has spent several years studying SMART as an option for bringing West Hartford into compliance with the state’s goal of diverting 60 percent of solid waste by 2024 (the town’s current level is 26.6 percent), as well for as keeping the town’s costs under control as waste management expenses continue to increase. SMART has been actively under discussion with the Council since early 2016.

The cost of waste disposal is continuing to rise, and there is the very real potential that solid waste will have to be transported out of state due to maxing out of the state’s facilities within the next several years.

“We tried weekly recycling, and that didn’t increase recycling much and it didn’t decrease the volume of trash,” Cantor said.

Cantor said that according to Phillips, yard waste – which does not even belong in the trash stream – and food waste cost the most to dispose of because those items are heavy. “If we could save on our tipping fees, we could look at offering curbside yard waste pickup,” Cantor said. There’s a significant cost associated with that type of program, and currently, yard waste is one of the biggest “offenders” in the system, according to feedback the town has received from its hauler.

Organics recycling, which was tested successfully in West Hartford with a small group of residents who volunteered for a three-month program from October through January, is still an emerging industry in the state and region. The information received from the test program was valuable, but according to Phillips the capacity for large scale organic waste recycling is not yet available.

Cantor stressed that no decisions have been made, and that efforts are underway for further study, discussion, and education.

“We’d rather be ahead of the crisis,” Cantor said. “We have to look at options, be proactive.”

If people could look at trash as a utility cost, there would be greater incentive to reduce their output, which would create positive financial as well as environmental impact. “We think about energy differently. We think about water differently,” Cantor said. “It’s really a paradigm shift,” she said.

“We are talking about our options, and [SMART] is one,” Cantor said. The Community Planning and Physical Services Committee has asked for additional information, and she said it’s premature for the program to be brought to the full Town Council for a vote.

“This is still in the investigation phase,” Cantor said.